Zimbabwe on the precipice! But of what, exactly? 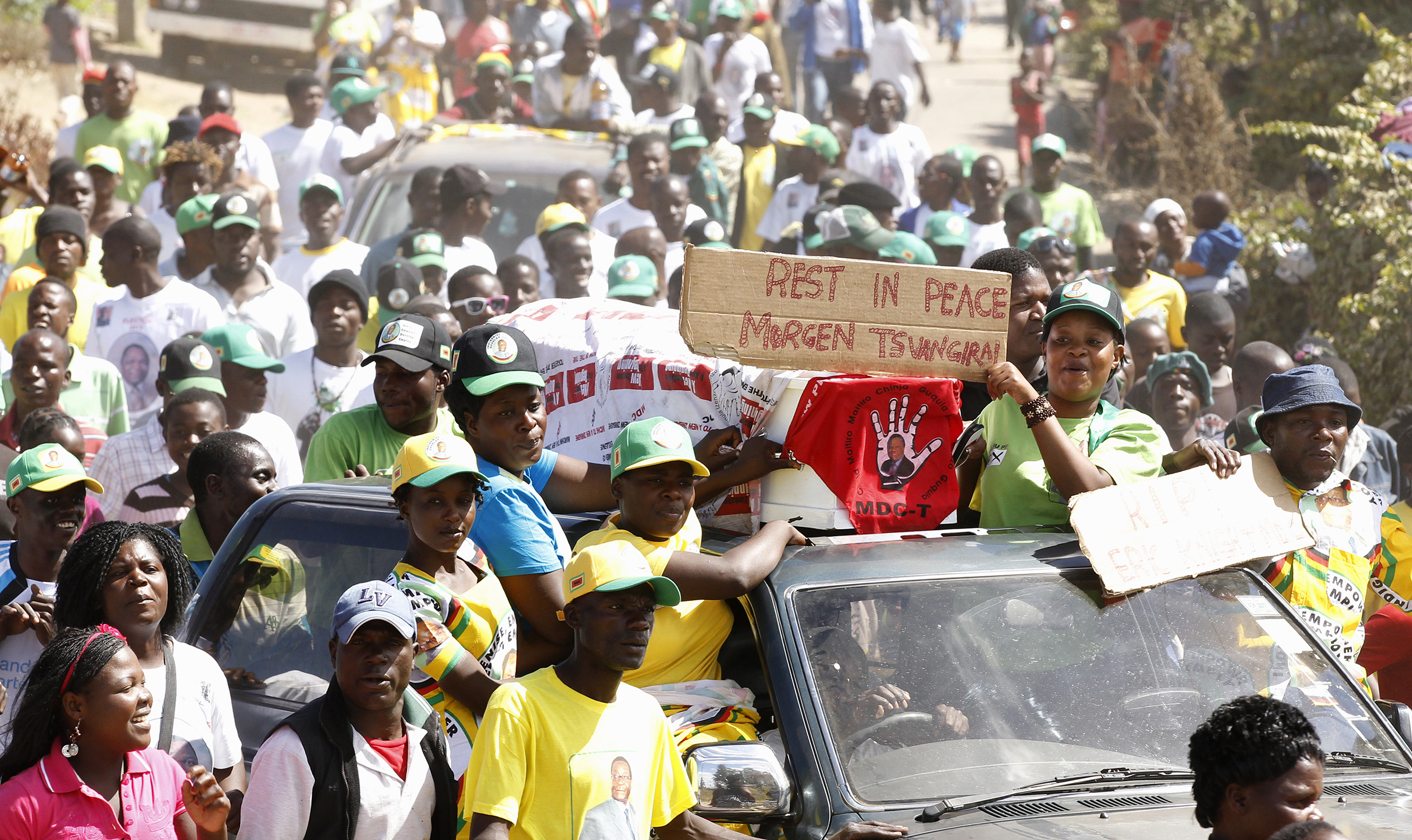 The dust is yet to settle in Zimbabwe after Robert Mugabe was re-elected for the eighth time in a swirl of suspicion of vote rigging. Morgan Tsvangirai’s MDC is talking tough. Civil society wants answers. South Africa has downgraded its opinion of the election to the international norm of “fair”. Meanwhile, people are getting edgy. By GREG NICOLSON.

Thabani Nyoni, spokesperson for Crisis in Zimbabwe Coalition (which comprises over 350 civil society organizations), said the country might be on the verge of chaos as it remained divided over the re-election of Robert Mugabe. Scared of what could happen as opposition parties refuse to accept the election result, some people are preparing for the worst, he said. They are withdrawing their money from banks and buying up food supplies in shops, Nyoni told Daily Maverick on the phone from Harare.

“Certainly, there could be some instances of violence,” noted Nyoni, concerned about what might happen during a standoff. Mugabe won the presidential election with 61% of the vote compared to Morgan Tsvangirai’s 34%. Opposition parties have noted irregularities with the voters’ roll and election process and civil society organisations have called the result a sham. Nyoni said opposition party members and human rights workers are at risk because Zanu-PF and the security forces might look to pressure them to acknowledge Mugabe as the elected president.

Forty-two families of MDC members have been attacked by Zanu-PF supporters and forced flee to Harare, claimed MDC spokesperson Douglas Mwonzora. In response, Zanu-PF’s Rugare Gumbo dismissed the accusation as lies. The Zimbabwe Stock Exchange responded to the elections with a drop of 11% on its first day of trading since the results were announced.

A statement from the Botswana government on Monday said its observers noted the orderly voting, but could not call the elections free and fair. “There is no doubt that what has been revealed so far by our observers cannot be considered as an acceptable standard for free and fair elections in SADC. The Community, SADC, should never create the undesirable precedent of permitting exceptions to its own rules,” read the statement. Botswana called for an independent audit to identify “shortcomings and irregularities”.

Botswana’s skepticism stood in contrast to South Africa’s President Jacob Zuma’s comments. Zuma congratulated Mugabe on Sunday and said according to observers the vote was “successful” and an “expression of the will of the people”. Both South Africa and Botswana are members of SADC. Another member, Tanzania, also congratulated Mugabe for his win. The Democratic Alliance released a press statement on Monday claiming the South African government is confused on the issue, stating that in a radio interview Deputy Minister of the Department of International Relations and Cooperation Ebrahim Ebrahim denied South Africa called the election fair or credible; rather, SA considers the vote “free”.

MDC has refused to back down and has encouraged Zimbabweans to challenge the results. “We know that the brutal Zanu-PF regime has once more unashamedly and mercilessly subverted the will of the people,” the party said in a statement on Monday. “The MDC totally resists such attempts at imposing an illegitimate government on the people of Zimbabwe … The MDC urges the people to remain steadfast and resilient in their fight for justice and a better life for all. Do continue to struggle and fight for what is right.”

The Federation of Unions of South Africa (Fedusa) was also critical. “Many voters who did not appear on the voters roll were allowed to register there and then on a separate register, while others were not,” said Fedusa’s Elias Bila, who was part of the Southern African Trade Union Coordination Council’s observer mission. “Most voting stations did not have basic services like electricity and many had to count ballots during the night by candlelight. This felt almost like we were in the previous century. Even more concerning is the cases where ballot counting was not done by the ZEC but by the Zimbabwean Police Services, who as most know, are politically aligned to Zanu-PF.”

He added, “There were obvious things like party agents assisting illiterate voters with their voting by basically voting on their behalf, without any questions being asked.” Cosatu spokesperson Patrick Craven said the union federation is still discussing the matter with colleagues in Zimbabwe. The Zimbabwe Congress of Trade Unions was unavailable for comment.

Opposition forces have few options to challenge the vote. MDC has vowed to take the issue to court by Friday’s cutoff date to challenge the election. But Nyoni said civil society organisations have rejected the court option because the judiciary, which is perceived as having close ties to Zanu-PF, is viewed as responsible for the situation. The election is said to have been manipulated with sophisticated subtlety making irregularities glaring but hard to prove. “The way this election has been rigged it is very difficult to bring hard evidence,” said Nyoni.

Before the elections the MDC said it had an action plan for all scenarios. So far, it has not announced any campaign of protest, although its treasurer Roy Bennett encouraged “passive resistance”. Police have warned that protests against the election result will not be tolerated.

Civil society organisations are engaging the ZEC, formally and informally, hoping for answers as they question the election process. Nyoni also called on political parties to engage and discuss the dispute and said the SADC and African Union must continue to monitor the situation. It’s crucial to stay involved he said. “Any slight issue and the country could explode.” DM

Photo: Supporters of ZANU-PF party celebrate with a coffin wrapped in a Movement for Democratic Change (MDC) flag in Mbare township, outside Harare August 4, 2013. REUTERS/Siphiwe Sibeko