MDC loses the battle. Will it lose the war? 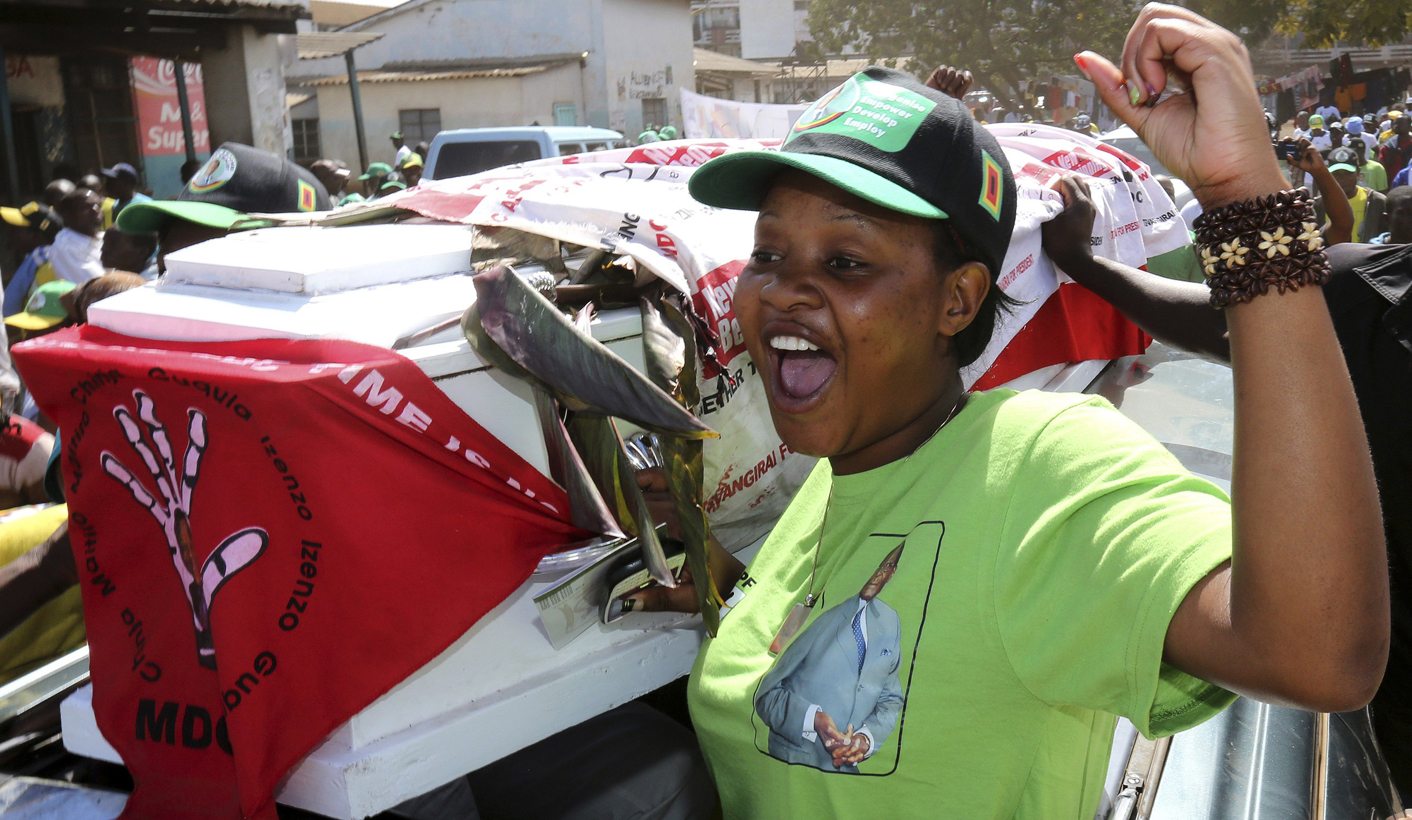 Official results say Robert Mugabe and his Zanu-PF have thumped Morgan Tsvangirai’s MDC-T in Zimbabwe’s eighth election since independence. President Jacob Zuma has already backed the octogenarian leader while Tsvangirai and Western governments have expressed concerns. This was all expected. Now, what’s the MDC going to do about it? By GREG NICOLSON.

Tsvangirai was confident before 31 July, but Mugabe was always favoured to take the election. Two things were running against the MDC-T leader. His legitimacy was damaged after working with Mugabe in the government of national unity (not to mention the exposés over his tumultuous love life), and the reforms needed to hold free and fair elections simply did not take place, leaving the process wide open to manipulation by Zanu-PF and security forces.

The Zimbabwe Electoral Commission declared Mugabe the winner of the presidential race on Saturday, taking 61.09% of the vote compared to Tsvangirai’s 33.94%, and avoiding a potentially bloody run-off similar to the 2008 vote. While the results confirmed Zanu-PF leaders’ belief that they would hammer a waning MDC-T, the opposition party and some foreign governments have voiced concerns. The standoff puts the MDC-T’s position in Zimbabwe at a crossroads.

“This fraudulent and stolen election has plunged Zimbabwe into a constitutional, political and economic crisis,” said Tsvangirai on Friday, calling the elections “stolen”. “We did not lose this election. We have won it. This is not a personal issue. It is a national issue. We will not take part in any institutions.”

The Zimbabwe Election Support Network (ZESN), which deployed the largest number of observers, said up to a million people were prevented from voting as the voters’ roll discriminated against urban voters and favoured the rural, where Zanu-PF is strongest. Zimbabwe Electoral Commissioner Mkhululi Nyathi resigned after the vote citing the election’s lack of integrity. There were few disturbances on the day, he said, “However these are not the only benchmarks of free, fair and legitimate elections.”

A report from The Times alleged this weekend that the election was bankrolled by Chinese and military investors profiting from Zimbabwe’s diamond fields. That money could be used to fund the security forces in any clampdown campaign.

British Foreign Secretary William Hague expressed “grave concerns” on Sunday, saying irregularities “call into serious question the credibility of the election”. US Secretary of State John Kerry said, “Make no mistake: in light of substantial electoral irregularities reported by domestic and regional observers, the United States does not believe that the results announced today represent a credible expression of the will of the Zimbabwean people.” Australian Foreign Affairs Minister Bob Carr was also sceptical: “[Voting irregularities] appear to have disenfranchised large numbers of voters and raised doubts about the credibility of the election results,” he said, calling for a re-run.

Criticism from the West matters less in Zimbabwe than support from South Africa. President Jacob Zuma expressed “profound congratulations” to Mugabe on Sunday after the “successful harmonised elections”. “President Zuma urges all political parties in Zimbabwe to accept the outcome of the elections as election observers reported it to be an expression of the will of the people,” read a statement from the Department of International Relations and Cooperation. The president’s spokesperson Mac Maharaj said Zuma has no comments on the reported irregularities and referred Daily Maverick to the assessments from the African Union (AU) and SADC, which have both released preliminary statements before issuing their final reports.

Head of the AU observer mission, former Nigerian president Olusegun Obasanjo, assessed the election as “fairly fair”. AU observers attended 350 of the 9,700 polling stations and found a “peaceful and tranquil environment” devoid of violence, harassment and disturbances. Its preliminary statement, however, acknowledges the election’s shortcomings. The AU has “grave concerns” over the handling of the voters’ roll, noted the number of ballot papers printed in relation to registered voters was significantly higher than international best practices, expressed great concern over a high incidence of voters turned away and a high number of assisted voters, and remarked on the biased nature of state media.

On Friday, the SADC declared the election “very free” but will wait a month to release its full report. The regional bloc had previously advised the vote be delayed to ensure proper preparations. On Saturday, however, Democratic Alliance Shadow Deputy Minister of Home Affairs said he and 14 others have refused to sign an SADC report proclaiming the vote free and fair. “I refused as my observations indicate that the credibility and fairness of the elections are questionable due to irregularities with the voters’ roll,” said Masizole Mnqasela.

The question now is what will MDC-T do next? Stories have emerged of reprisal arrests, attacks and intimidation against party members. On Sunday, the party reported the abduction of member Tsaurai Makadaya, the assault of members Rindai Muchemwa and Nobert Dhokotera, burning of MDC councillors’ houses and the intimidation of activists at a shopping centre. It reported on its Facebook page that Zanu-PF supporters brought a coffin to a member’s home while another supporter was arrested for reporting an assault.

The MDC-T leadership met on Saturday but have few options to challenge Mugabe’s victory. It held that the party will not “legitimise institutions created by an illegal election and therefore will not engage in institutions of government” and called for a forensic audit of the election process, in particular the voters’ roll. “The MDC is determined to pursue peaceful, legal, political, constitutional and diplomatic remedies to resolve the current crisis,” said the party statement, denying any form of violent uprising.

The party has until Wednesday to present evidence to the courts of a rigged election, but civil society groups are not convinced the judiciary can help. In a joint statement, civil society organisations said they “respectfully disagree with that approach because we believe it is the courts that got us into this contested position. We have no reason to believe that the same courts can get us out of this mess.”

None of this is new in Zimbabwe. Not the allegations of stolen elections funded by nefarious sources, not the bind the opposition finds itself in, and not the lack of support from regional leaders. It was expected and MDC-T should be prepared for the situation. How the party navigates its few options in the coming days will define whether it remains relevant or is destined to become only an observer in the country’s future as Zanu-PF continues its rule and new oppositions emerge. DM

Photo: Supporters of ZANU-PF party celebrate with a coffin wrapped in a Movement for Democratic Change (MDC) flag in Mbare township, outside Harare August 4, 2013. South Africa’s President Jacob Zuma on Sunday congratulated Zimbabwean leader Robert Mugabe on his re-election, in sharp contrast to Western governments which questioned the credibility of a rushed, disputed vote. African monitors broadly approved the conduct of the election but Mugabe’s main rival, MDC leader Morgan Tsvangirai, has said he will challenge the results in court with evidence of massive vote-rigging, irregularities and intimidation. REUTERS/Siphiwe Sibeko