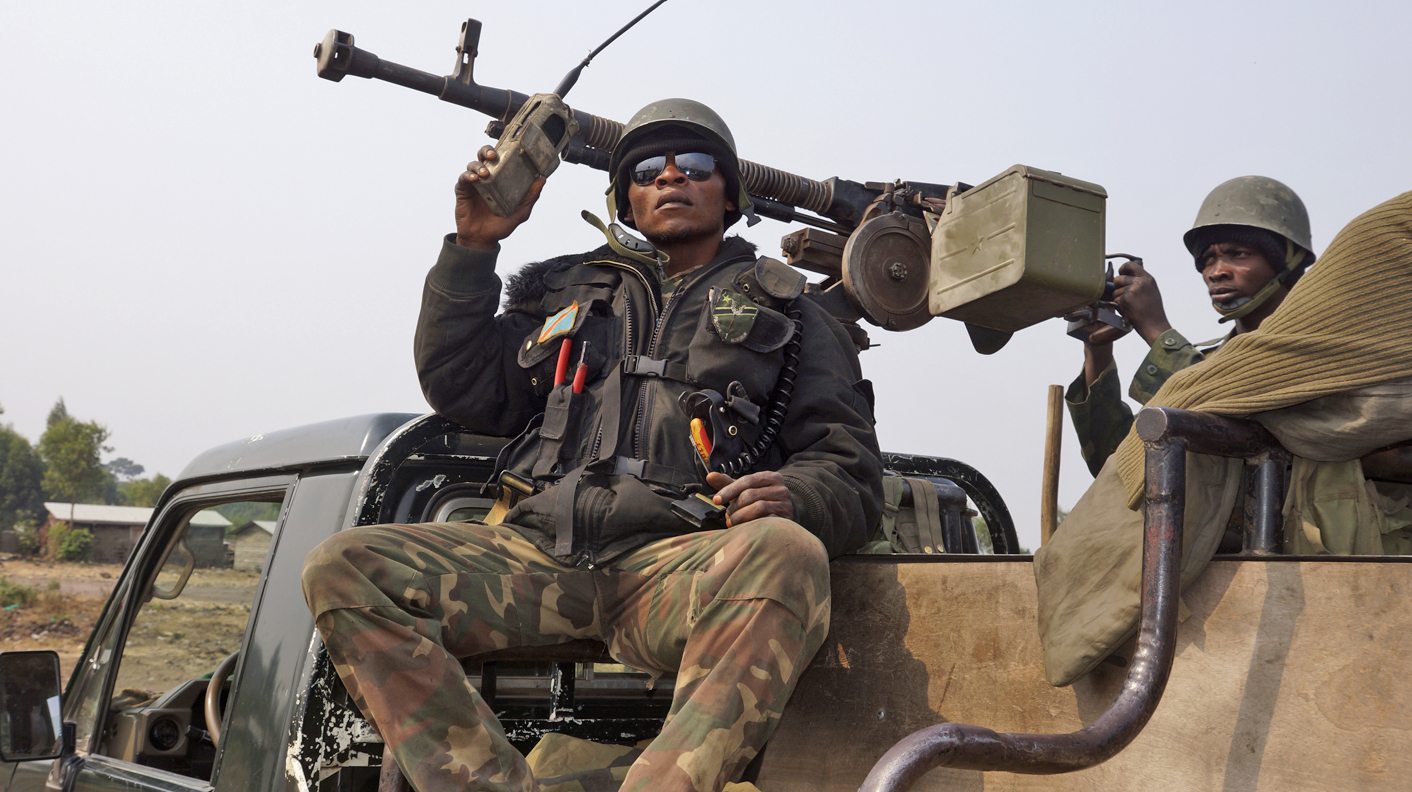 Over the course of its long engagement in the Democratic Republic of Congo, the United Nations has issued plenty of ultimatums. On Tuesday, it issued another one, aimed at the rebel M23 movement. But this was different – for the first time, the threat had real teeth. Along with troops from Tanzania and Malawi, South African soldiers are on standby to go on the offensive if necessary as the most groundbreaking military development in UN history gets tested for the first time. By SIMON ALLISON.

To understand what the United Nations is doing in the Democratic Republic of Congo, you need to go back nearly two decades, to a different country on a different continent entirely.

It is 1995, in the middle of the Bosnian war, and the United Nations peacekeeping mission, staffed by Dutch soldiers, has set up a ‘safety zone’ for Bosnian Muslims fleeing from Serbian forces. They needed it, and thousands of people – men, women and children – make their way into the UN camp.

But the Serb forces, led by Ratko Mladic, keep coming, and the UN peacekeepers do nothing to stop them, crippled by an institutional fear of losing their neutrality and becoming an active participant in the conflict. They abandon their positions as over 8,000 Bosnian Muslims are slaughtered in cold blood, the worst massacre in Europe since the gas chambers of World War II. So much for keeping the peace. So much for the “safety zone”.

It remains one of the UN’s greatest failures – as the organisation itself admits. “Through error, misjudgment, and an inability to recognise the scope of the evil confronting us, we failed to do our part to help save the people of Srebrenica from the Serb campaign of mass murder,” said UN secretary general Kofi Annan in 1999. An internal report in the same year was even blunter: “The tragedy of Srebrenica will haunt our history forever.”

It was Srebrenica, coupled with the UN’s failures in Rwanda, which led the organisation to question its role and how involved it was really prepared to get. The result was a new doctrine of humanitarian intervention, the Responsibility to Protect (usually known by the oddly childish shorthand R2P).

“Drawn up by the UN in response to the wars of the 1990s, not least in Bosnia and Rwanda, which both saw atrocities that would be defined as genocidal, R2P was adopted by the UN as a ‘norm’ for dealing with conflicts where civilians were under attack in 2005,” wrote the Guardian’s foreign affairs editor Peter Beaumont in May this year. “Its language has been referred to – or invoked directly – to justify the French interventions in Côte d’Ivoire in 2011, in Mali earlier this year, and the Nato-led no-fly zone imposed over Libya during the conflict that led to the fall of the Gaddafi regime.”

Like it or not, R2P has become the gold standard for determining the legitimacy or otherwise of a foreign military intervention – and the UN (or, more often than not, the UN Security Council) is the judge of when that standard should apply. Still, the UN has until recently been reluctant or unable to take the logical next step of applying this doctrine to its own peacekeeping missions: to turn peacekeepers into peace enforcers.

This all changed with the introduction of the Force Intervention Brigade (FIB) in the Democratic Republic of Congo – an elite force of 3,069 combat troops with the mandate to engage in offensive action as and when required to protect civilians (designed to complement Monusco, the existing 17,000 soldier-strong UN peacekeeping force). Authorised by UN Security Council Resolution 2098 in March, the FIB is the first brigade of blue helmets in history that is not limited to self-defence. When it needs to, it can go on the attack.

Soldiers for the unit are drawn from Malawi, Tanzania and South Africa. Although numbers are hard to come by, the South African National Defence Force (SANDF) is estimated to have contributed from 800 to 1,000 soldiers. According to defence analyst John Stupart, it’s a relatively impressive fighting force:

“SADC Brigade forces have exercised thoroughly for all kinds of operations, including this, and are probably the most capable regional standby force within the African Union to take on M23. Lessons have been learned from the CAR as well, and I don’t expect we’ll see such an isolated pitched battle between South Africans on their own and rebel forces vastly outnumbering them.

“This time we can anticipate heavy weapons support both from South African units and from their SADC partners. Therein lies the second point. Tanzania is actually doing a lot of the heavy lifting for the FIB. Its commander, Brigadier General James Aloizi Mwakibolwa has decades of command experience, and is well-suited for this kind of campaign. Beyond this, the Tanzanians are bringing an artillery company, Special Forces and a host of other useful detachments that will be valuable in locating and destroying M23. In total, Tanzania’s bringing about 1,300 troops to this fight, actually making them the lead actors in the operation.”

Already, the FIB is making a difference – even if they haven’t yet gone on the offensive, their presence has allowed the UN to use new tactics against the rebels. On Tuesday, Monusco issued an ultimatum to M23 rebels in the area around Goma, ordering them to disarm, demobilise or risk. This is the first UN ultimatum in the DRC that actually has teeth – if rebels fail to comply within 48 hours, the UN plans to send in the FIB.

The idea is to enforce a “security zone” to protect civilians around the city of Goma. Whether or not this can be enforced is another matter entirely. Also in question is whether it needs to be.

In an enlightening blog post, photojournalist Phil Moore, currently in Goma, reports that perhaps the rebel threat within this defined “security zone” is not all it’s cracked up to be:

“‘The UN has declared war’ said a UN public information official as he flapped around his office yesterday, warning that the next day, he ‘may be working from the trenches’. He handed me the press release and a map … Maybe I read the map wrong, or maybe I’m just cynical, but all of this seems to be wrong, or at least misleading … The security zone extends north from Goma’s shoreline on Lake Kivu, all the way up to the FARDC’s (government army) front-lines. In other words, M23 is not really implicated in this ‘security zone’.”

As offensive engagements go, then, mopping up M23 rebels from areas that are already held by the government might not be the UN intervention brigade’s most strenuous task. Nonetheless, it’s a bold step for the normally noncommittal international organisation, which is demonstrating that the lessons from Srebrenica have not been forgotten.

Although it may help, the intervention brigade on its own is unlikely to solve the bigger political problems symbolised by the M23 rebels.

“Monusco will only be able to get rid of the M23 if Paul Kagame decides to give up on his interests in the eastern DRC,” said David Smith, a veteran Congo-watcher. “Kagame does appear, on the surface at least, to be giving in a bit to international pressure. Perhaps he is simply regrouping. The M23 is only the latest of numerous Rwandan-backed militia operating in the Kivus and I doubt very much that it is the last.” DM