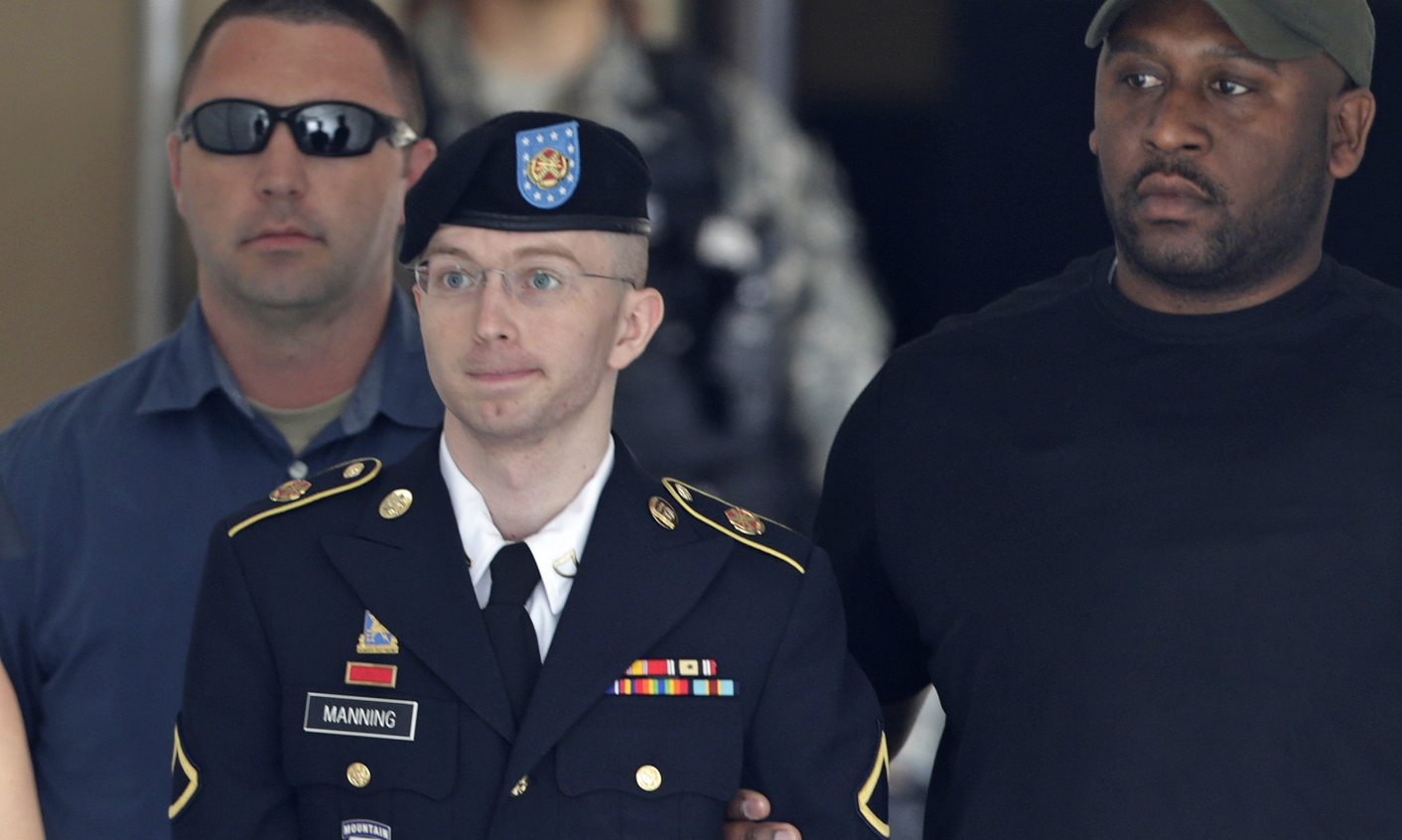 A military judge on Tuesday found U.S. soldier Bradley Manning not guilty of aiding the enemy, the most serious charge he faced for handing over documents to WikiLeaks, but he still likely faces a long jail term after being found guilty of 19 other counts. By Medina Roshan and Scott Malone.

Colonel Denise Lind ruled the 25-year-old Army private first class was guilty of five espionage charges, among many others, for the largest unauthorized release of classified U.S. data in the nation’s history.

The trove of documents, including battlefield videos and diplomatic cables, was a huge boost to the profile of the WikiLeaks anti-secrecy website and its founder Julian Assange. Tuesday’s verdict could be a blow to his efforts to encourage people with access to secret information to release it publicly.

“It is a short-sighted judgment that cannot be tolerated and it must be reversed,” Assange told reporters at the Ecuadorean embassy in London, where he has been living for more than a year. “The abuse of Bradley Manning has left the world with a sense of disgust.”

Manning, who was working as a low-level intelligence analyst in Baghdad when he was arrested three years ago, could face up to 136 years in military prison. Lind will take up the question of his sentence on Wednesday.

The U.S. government was pushing for a life sentence without parole, which would have come if Manning had been convicted of aiding the enemy by leaking of information that included battlefield reports from the Iraq and Afghanistan wars.

It viewed the action as a serious breach of national security, while anti-secrecy activists praised it as shining a light on shadowy U.S. operations abroad.

“The verdict is certainly a chilling one for investigative journalism, for people who might come into information that they believe should be part of the public discourse,” said Michael Bochenek, director of law and policy at Amnesty International. “The message is that the government will go after you.”

Manning’s case is one of two prominent ones involving high-profile leaks, illustrating the limits of secrecy in the Internet age. Former U.S. intelligence contractor Edward Snowden has been holed up in the transit area of a Moscow airport for more than a month, despite U.S. calls for Russian authorities to turn him over.

Army prosecutors contended during Manning’s court-martial that U.S. security was harmed when WikiLeaks published videos of a 2007 attack by an American Apache helicopter gunship in Baghdad that killed a dozen people, including two Reuters news staff, diplomatic cables and secret details on prisoners held at Guantanamo Bay.

Manning’s leaks to the site in 2009 and 2010 put the international spotlight on Assange.

The verdict may embolden the U.S. government to bring a criminal case against Assange, said James Goodale, a lawyer and author with expertise in press freedom.

“The bottom line is they won because the guy leaked illegally, and they’re only going to be encouraged to get the guy who’s on the other side of that equation,” said Goodale, a former lawyer for the New York Times.

Any charges against Assange would likely center on conspiring with Manning to have the young soldier violate the Espionage Act. Any case against Assange would have the additional complication of whether the First Amendment to the U.S. Constitution, which guarantees press freedom, would apply to Assange in a way that it did not to Manning.

A crowd of about 30 Manning supporters gathered outside Fort Meade, where the court-martial was held. One of them, Nathan Fuller, expressed concern over the stiff sentence Manning could still face.

“The remaining charges against him are still tantamount to life in prison. That’s still an outrage,” Fuller said. “He’s equated with spies and traitors.”

But two top U.S. Congressmen from a House intelligence committee praised the verdict.

“Justice has been served today. PFC Manning harmed our national security, violated the public’s trust, and now stands convicted of multiple serious crimes,” said Representatives Michael Rogers, a Republican who chairs the committee and Dutch Ruppersberger, a Democrat and its ranking member.

During the court-martial proceedings, military prosecutors called the defendant a “traitor” for publicly posting information that the U.S. government said could jeopardize national security and intelligence operations.

Defense lawyers described Manning as well-intentioned but naive in hoping that his disclosures would provoke a more intense debate in the United States about diplomatic and military actions in Iraq and Afghanistan. DM

Photo: U.S. Army Private First Class Bradley Manning (C) departs the courthouse at Fort Meade, Maryland July 30, 2013. A military judge on Tuesday found Manning not guilty of aiding the enemy – the most serious charge among many he faced for handing over documents to WikiLeaks. But Col. Denise Lind, in her verdict, found Manning, 25, guilty of 19 of the other 20 criminal counts in the biggest breach of classified information in the nation’s history. REUTERS/Gary Cameron