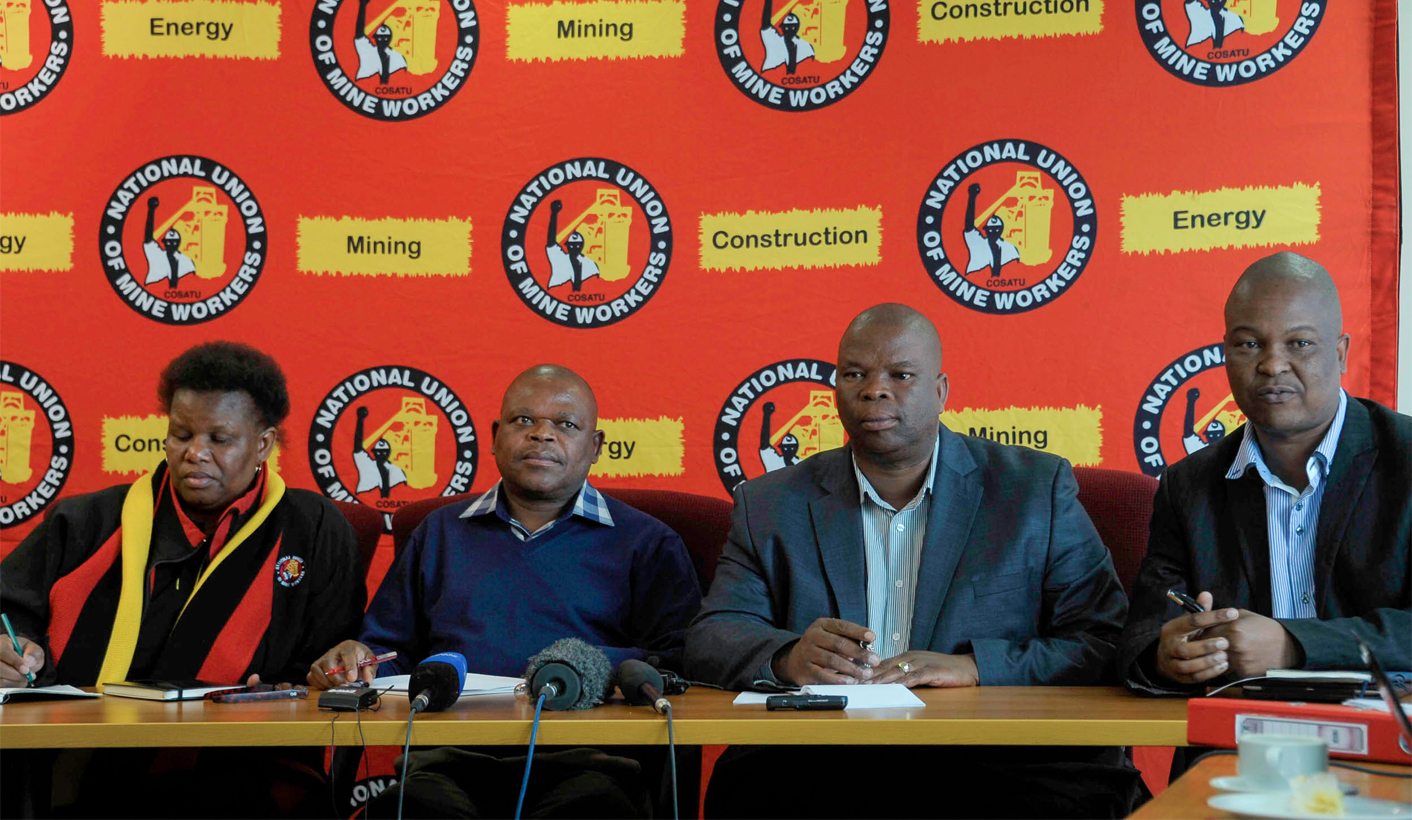 According to the National Union of Mineworkers, the government’s intervention in the platinum belt is yet to come into effect as violence and intimidation continues. The union spoke on Monday after its leaders met over the weekend. It was tight-lipped on the allegations against Cosatu’s Zwelinzima Vavi, highlighting the differences Cosatu’s two biggest unions, the NUM and Numsa. By GREG NICOLSON & THAPELO LEKGOWA.

National Union of Mineworkers (NUM) general secretary Frans Baleni expressed shock at the ongoing violence in the platinum belt and appealed to all signatories to Deputy President Kgalema Motlanthe’s Framework Agreement for a Sustainable Mining Industry to meet their commitments to ensure a stable mining industry. The union’s national executive committee (NEC) said violence and intimidation continues almost a month after mining stakeholders signed the agreement, making a “mockery” of the initiative.

“The NUM is of the view that the deputy president must urgently act in operationalising that framework as agreed by the parties,” said Baleni, speaking in the union’s offices. “We are making a call that this framework has not been operationalised. Besides that, being operationalised, crime continues to be committed in terms of intimidation [and] violence.” He said there are 14 murder cases where no suspect has been arrested and in cases where arrests have been made prosecutions are yet to begin. The NUM called on the justice department to shift cases from Rustenburg’s courts to other courts so mine-related cases can be fast-tracked.

Baleni refused to name those responsible, but the NEC statement clearly points to the Association of Mineworkers and Construction Union (AMCU). The NUM claims that of 42 suspects arrested for violence or intimidation, 78% of them are from Amcu.

Amcu president Joseph Mathunjwa hit back, “The statement by the NUM does not need to be responded to as they are not statisticians of crime … We are not aware of any violence so if there is any it is since they know of it – they are the architects of the violence.” He added: “[NUM] have a war room in their heads where they create all this violence they claim.” Amcu are not signatories to the mining framework as they are still consulting members.

The deputy president’s spokesperson Thabo Masebe said all stakeholders are responsible for implement the commitments outlined in the framework. “The framework can’t work on its own,” he told Daily Maverick. “The parties to the framework need to live up to the commitments they made.” Masebe urged any parties with knowledge of violence to inform the police and said anyone concerned about the progress of the framework can contact the deputy president’s office. None of the parties have tried to contact Motlanthe, as far as Masebe is aware.

SAPS North West spokesperson Brigadier Thulani Ngubane denied the police are failing to make arrests in the platinum belt and urged anyone with information on crimes to come forward rather than assign blame. “The situation is not so bad as we are in control, but the attacks are not easy to trace, like at a rally which NUM had in Wonderkop one person lost his life and yesterday a body of a man was found, allegedly an Amcu member. So if people come forward with information the police can act on it,” said Ngubane. “The crimes in the platinum belt are done in a guerrilla tactic where people ambush each other and vanish. If the unions, community members, the employers and SAPS could work together, the war could come to an end.” He could not confirm what percentage of those arrested were Amcu members – “all we do is arrest criminals”.

The NUM’s Monday press conference also touched on wage disputes (Eskom, Chamber of Mines and Transhex) and settlements (De Beers and Aquarius) but the morning was dominated by questions on Cosatu general secretary Zwelinzima Vavi. The union did not want to get embroiled into the allegations of sexual misconduct and rape. “It’s difficult to talk about conspiracy theories,” said Baleni. “We don’t want to venture into that because we don’t have the facts.”

Asked about Cosatu’s policy on relations between senior leaders and junior officials, Baleni said he couldn’t remember – “It’s a tricky one”. Thamsanqa Matosa, NUM deputy president, said the union did not discuss whether it would want to deploy a member to Cosatu’s general secretary position should Vavi be replaced. “He’s not going anywhere,” he said of Baleni. “The general secretary has made it very clear we’re not part of [Vavi’s scandal] and will never be part of it in any future.”

The NUM’s reluctance to comment on the issue contrasts with the position of the National Union of Metalworkers South Africa (Numsa). In a statement, Numsa said it accepts Vavi’s apology and was worried the allegations form part of a campaign by Vavi’s enemies within Cosatu to remove him. After the harassment charges against Vavi were dropped on Monday, Numsa general secretary Irvin Jim told Daily Maverick, “We are vindicated as Numsa in that we have consistently kept our trust in Zweli that Zwelinzima Vavi has no capacity to rape anyone … We know him as respecting women.” He did not want to speculate as to why some unions, such as the NUM, did not defend the Cosatu general secretary.

The two unions have been at loggerheads recently but the NUM’s Baleni told media that a bilateral meeting facilitated by Cosatu is being set up to find a solution. Numsa is accused of poaching members in the mining and construction sectors and on Monday Baleni suggested Numsa’s calls for a special congress to resolve allegations of financial misconduct against Vavi bordered on ill-discipline. “It is not in our interests to have permanent divisions between us. What’s important is that we should work together and be united,” said Baleni.

Jim, however, said the meeting had been planned for some time but not taken place. What continues, he alleged, is that the NUM attacks his union whenever it gets the chance. Jim hit back, “We are the National Union of Metalworkers South Africa. We don’t account to Baleni. We are an autonomous organisation … We reject the NUM trying to hold Numsa hostage in a corner.” DM