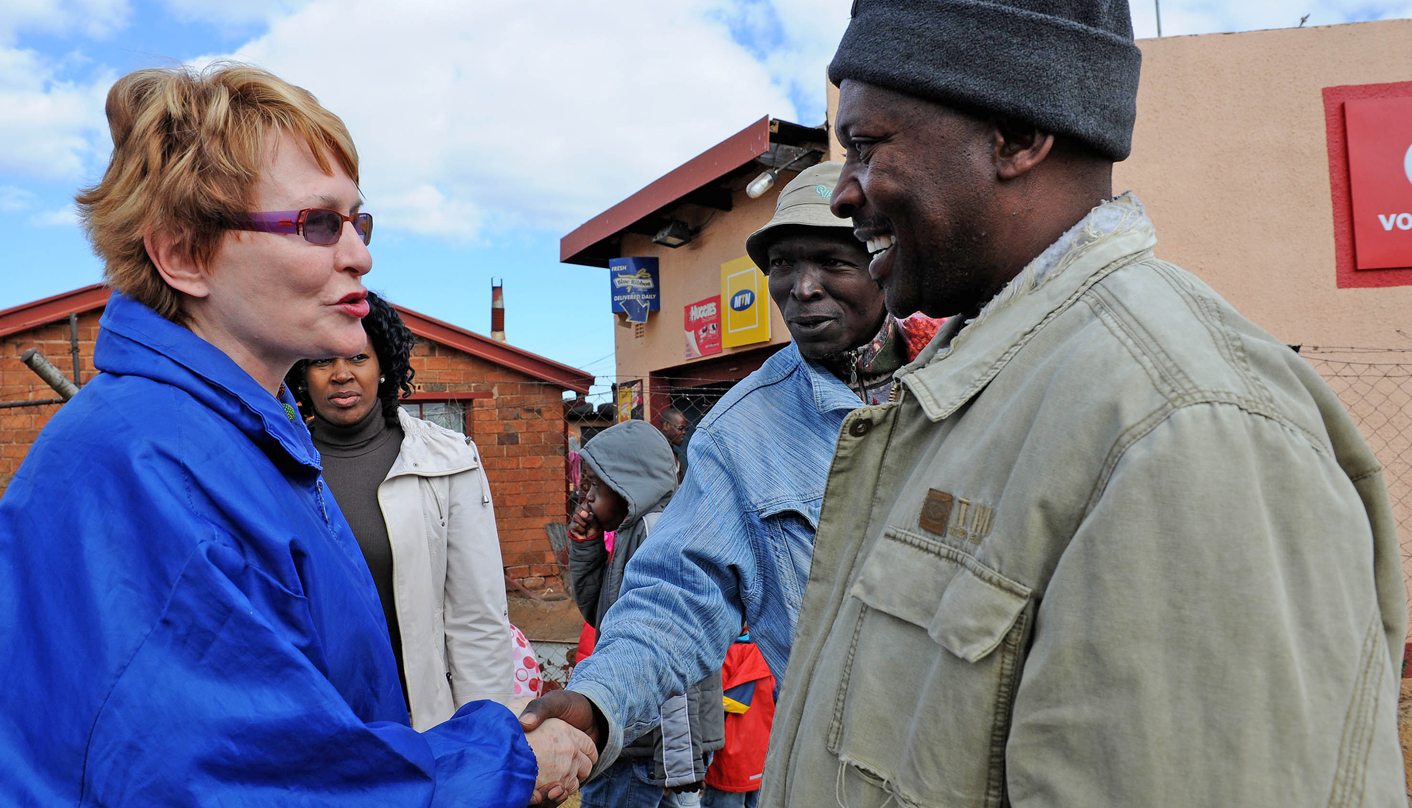 As we all jointly experience that strange feeling of déjà vu that seems to hang around our discussions about power, privilege, rape and Cosatu House, something strange and odd is happening. Something unique, new, and genuinely important. We are beginning to discuss the DA's candidate for the post of Gauteng premier. And not in a "let's see if someone cares" kind of way, but in a serious and important manner. And the possibility that Helen Zille herself may decamp from her Republic, and come on back to South Africa for a spell makes this all the more interesting. By STEPHEN GROOTES.

Strangely, the starting gun for the race to be nominated to be the DA’s candidate for premier has been fired by someone who is hardly known on the national stage. Say the words “Jack” and “Bloom” to someone from KwaZulu-Natal, and you’ll get a look, and a shake of the head. Say those words in Gauteng and you’ll get a “ah, him, the health guy, riiight”. Whether you love him, hate him, or, as the CEO of Chris Hani Baragwanath did once, ban him from your hospital, you have to admit he’s a hell of a provincial politician. He has taken an issue and made it his own. It’s got to the point that when people in Gauteng hospitals come across problems, he’s the person they call to fix it.

And so it’s entirely appropriate that this most Gauteng of politicians has decided to run for the position of provincial premier. He did all the usual things, the press conference/announcement at Constitution Hill, the interviews and the well-written, slightly excited press releases.

But it’s probably not going to be him. It’s too early to say exactly who it will be, but a really tantalising prospect has arisen.

Over the weekend the City Press suggested Zille herself may consider running for the post, that if nominated, she may leave the humidity behind, and come to the highveld.

First things first, there will be a lot of guff about whether or not someone can be the premier of two different provinces, one after the other. After my usual perusal of the Constitution (it really does sit next to my iPad at all times), I can’t see why not. There seems to be no impediment written down there, and while it is possible that national legislation could prohibit it, at the moment it doesn’t seem to.

And the quite American concept of a “carpet-bagger”, a person who comes from another state to run for office doesn’t really have a huge hold on our political mainstream. The communities of Cape Town and Gauteng are probably more closely linked through Twitter and business email than any geographic change could make them.

So, why would the DA do it, what would be in it for them, and thus for her?

At the moment, the DA claims it has polling evidence showing the ANC would get just 51% in Gauteng. Don’t get too excited. Those numbers are, to use the phrase “soft”. They will change. Polls during non-election periods are almost always misleading, because people like to vent their frustrations with their parties when speaking to pollsters, but when it comes to the crunch, they often go back to the party they love. That is probably more true here than in many other places.

But those numbers will certainly make the blue brigade think of what they could do to the tip them over the edge. And Zille would make a great candidate. She has a proven record of competence, could no doubt produce thousands of Capies who would provide testimony of what she can do, and knows how to campaign. And to those who do try to use the “carpet-bagger” claim, she can always visit her old school, down in Waverley (Conflict Alert: The Daily Maverick understands that the writer’s wife attended the same institution. But he is categoric, he did not meet her there.)

And the decision would certainly get a huge media response, it would be the dominant theme in the national discussion, you can imagine how it would get huge momentum. Wherever Zille went, cameras would follow, and whatever she said, the ANC would be forced to respond to.

That is where the fun begins. At this moment, the Gauteng ANC and President Jacob Zuma are about as close as Zwelinzima Vavi and S’dumo Dlamini. Gauteng is the only ANC province still to be governing itself after opposing Zuma at Mangaung. And it’s strong enough in its own right to withstand pressure from Luthuli House. The fact that its leader, Arts Minister Paul Mashatile, was left untouched in the last cabinet reshuffle is an indication of that.

So this would have the effect, happily for the DA, of putting a rather large finger on an ANC pressure point, and pushing hard. Luthuli House and Walter Sisulu House (Gauteng ANC HQ) would be forced to work together. It would not a happy marriage make. It would also force the ANC to push far more resources into Gauteng during an election campaign, which might mean it can’t campaign quite as effectively as it would in other provinces.

It does seem, to an extent, that this is a no-risk bet for the DA. If Zille were to lose the election, the people of the Western Cape would probably take her back. She might have to jump through a few hoops first, but it shouldn’t take too long, or be too arduous. And losing Gauteng would not be a train smash. Just running the ANC really close would be a victory in a province that is predominantly black. It would really send a signal that the ANC is in serious trouble. It would also boost the morale of everyone within the DA, and make people who’ve only voted for the ANC up until now think twice before doing so again. And it seems unlikely that there’s any risk the DA could lose the Western Cape now, no matter who replaced Zille on the ballot paper.

There is still plenty of water to go before we cross next year’s election bridge. The DA’s Mmusi Maimane may well feel he deserves a chance as well, and claim that Zille’s presence up north may fire up the ANC in a way that actually strengthens its campaign somehow. And Bloom is not going to give up without a fight; he certainly wants the job.

But just the fact we actually care about who will be the DA’s candidate tells us that things are changing. Gwede Mantshe can fulminate all he likes about how the province won’t go to the DA next year, he doesn’t seem to be making predictions over a longer period than that. And as for his boss, well, those mad Americans may be right. The rapture could indeed be coming closer. DM