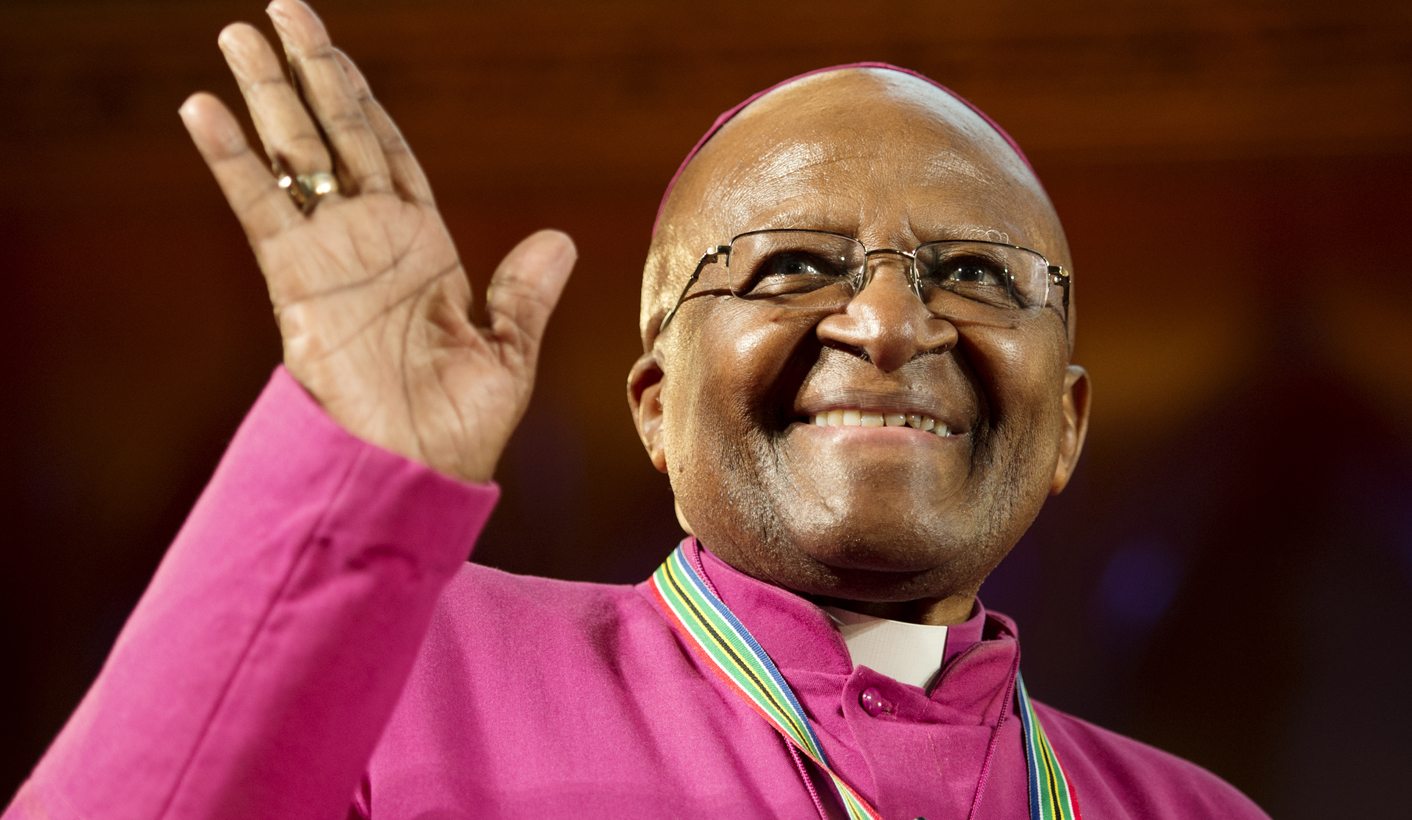 “I cannot worship a homophobic God.” These were the words of Archbishop Desmond Tutu in Cape Town on Friday, declaring his support for the launch of an unprecedented UN campaign to protect gay rights. Tutu also said he would rather spend the afterlife in hell than go to a gay-hating heaven. REBECCA DAVIS explores why it matters.

Tutu has made his feelings on this matter clear before. In a 2007 radio interview with the BBC, in fact, Tutu made pretty much exactly the same statement as that which he did on Friday in Cape Town. Criticising erstwhile Archbishop of Canterbury Rowan Williams for the church’s handling of the issue of whether to ordain gay bishops, Tutu said: “If God, as they say, is homophobic, I wouldn’t worship that God.”

Earlier that same year, while attending the World Social Forum in Kenya, Tutu told journalists that “I am deeply disturbed that in the face of some of the most horrendous problems facing Africa, we concentrate on ‘what do I do in bed with whom’.” In 2005, visiting the University of North Florida, Tutu made a similar complaint directed to the Anglican Church: “Isn’t it sad, that in time when we face so many devastating problems – poverty, HIV/Aids, war and conflict – that in our Communion we should be investing so much time and energy on disagreement about sexual orientation?

Tutu, in his public statements, has repeatedly compared homophobia to racism. On Friday, he extended the analogy: “I am as passionate about this [UN LGBT rights] campaign as I ever was about Apartheid,” he told journalists and members of civil society at the launch of the ‘Free & Equal’ campaign. “To me it is on the same level.”

The elderly cleric has never been one to mince his words on issues that he feels deeply about – in recent years delivering unsparing criticism of the ANC government, for instance. But his outspoken example on the gay rights issue, as a universally respected religious leader, is perhaps particularly important.

It’s a curious time for the gay rights movement internationally. In countries where gay rights are secure, the conversation has been dominated by the issue of gay marriage as the next step in achieving true equality. In the States, the repeal of 1996’s DOMA (Defence of Marriage Act) at the end of June now means that same-sex married couples have the same access to federal benefits as heterosexual married couples, though individual states are still allowed to deny recognition to other states’ marriages. There are already around 114,000 married gay couples in the US, the New Yorker reports, and that figure is likely to rise post-DOMA.

Less than a month later, British politicians (and the Queen) approved the Marriage (Same Sex Couples) Bill, with the first gay wedding ceremonies expected mid-2014. The first ever gay engagement notice has already been placed in that august publication The Times: “The engagement is announced between Edward, son of Mr and Mrs Fordham of Spalding, Lincolnshire, and Russell, son of Mr and Mrs Eagling of Southwell, Nottinghamshire,” the announcement read.

There are now 16 countries worldwide which permit gay marriage, of which South Africa is the only African state. A Pew Research Centre poll carried out between March and May this year on the wider question of whether homosexuality should be accepted by society found that attitudes towards homosexuality have been “fairly stable” in recent years, except in South Korea, the US and Canada – where acceptance of homosexuality has grown sharply since 2007.

The inhabitants of some countries are on the fence about homosexuality (Israel, Poland and Bolivia, for instance). But others are almost unanimous in rejection, the study found. Intolerance among African countries was even higher than among predominantly Muslim countries: 98% of Nigerians, 96% of Ghanaians and 96% of Ugandans polled believed homosexuality should not be accepted by society.

South Africa was an outlier for the researchers. In the countries they surveyed where same-sex marriage had been legalised, support for homosexuality was at above 60% in all but one case. The exception was South Africa, where only 32% of respondents said homosexuality should be accepted – still the highest acceptance level in Africa.

Polls of this sort will always be open to criticism, but if the South African results are taken as being in any way accurate, they starkly reveal the chasm that may exist between the Constitution’s liberal, protective approach to gay rights and the attitude of those on the ground. This, in a wider sense, encapsulates the strangeness of the moment that the gay rights movement is in: Parts of the world fight for the right for gays to marry; others, for the right of gays to live.

South Africa brings together the best and the worst of realities for gays: deeply progressive legislation, and deeply regressive social attitudes. The murder of lesbian Duduzile Zozo in June was yet another reminder that homosexuality can still be a death sentence in South Africa. “She loved herself the way she was,” her mother Thoziwe Zozo said after Duduzile’s death. “I don’t know what it is that disgusted them when they looked at her.”

Introducing the UN’s Free & Equal campaign on Friday, UN human rights chief Navi Pillay was at pains to say that the choice of South Africa as the country to launch it in was not intended as a rebuke to the South African government about gay hate crimes. However, Pillay pointed out, South Africa “has some of the worst cases of homophobic violence. People are literally paying for their love with their lives.”

Census 2011 did not measure religious faith among South Africans, but Census 2001 found that almost 80% of South Africans classed themselves as Christian. As such, the role of religious leaders in shaping and combating attitudes is clearly potentially very high. The Pew Research Centre study noted the correlation between religiosity and homophobia: “There is far less acceptance of homosexuality in countries where religion is central to people’s lives – measured by whether they consider religion to be very important, whether they believe it is necessary to believe in God in order to be moral, and whether they pray at least once a day,” the report found.

Tutu stressed the importance of the potential role of religious leaders at Friday’s launch, while also noting its intrinsic difficulties. He seemed to encourage Christian leaders to carry out less literal Biblical interpretation: “Just because it’s in the Bible, doesn’t mean it’s true,” Tutu said.

Gender activist Lisa Vetten had harsher words for South African religious leaders after the murder of Zozo: “Our religious leaders have a special responsibility,” Vetten told the SABC. “I think because they are picky, intolerant and unaccepting, they are playing a part in people not accepting lesbians, gay and transgender individuals.”

Catholic Archbishop of Durban Wilfrid Napier is one religious leader who has been criticised for his public statements about homosexuality. Defending his now-notorious assertion to the BBC that paedophilia was a “disorder” rather than a crime, Napier told the M&G in April that he could not be accused of homophobia “because I don’t know any homosexuals”.

The role of religious leaders in South Africa is doubly important given the number of South Africans in high office, or aspiring to high office, who profess a deep religious faith. Chief Justice Mogoeng Mogoeng’s church, Winners International, reportedly considers homosexuality as an illness. President Jacob Zuma was reported in the past to have a close relationship with Rhema Ministries’ Ray McCauley, who has been vocal in his opposition to gay marriage. (McCauley himself has been divorced twice.) COPE’s presidential candidate for the 2009 elections was Mvume Dandala, former presiding bishop of the Methodist Church of Southern Africa (MCSA). The MCSA was in court last month to defend its dismissal of minister Ecclesia de Lange after she announced she would marry her female partner.

The list of South African public figures – religious or not – who have made problematic statements about homosexuality is long and shameful. Zuma himself famously said in 2006 that when he was growing up, “an ungqingili [a gay] would not have stood in front of me. I would knock him out.” In January last year, Zulu King Goodwill Zwelethini said that “if you do it [engage in same-sex relations], you must know that it is wrong and you are rotten”.

In May last year, Congress of Traditional Leaders of SA (Contralesa) president Patekile Holomisa told City Press that “the ANC knows that the ‘great majority’ of South Africans do not want to promote or protect the rights of gays and lesbians”. And back in 1998, erstwhile NP leader Marthinus van Schalkwyk responded to a smear campaign by saying: “I have never in my life had a homosexual relationship. Ek is ‘n boereseun,” seemingly suggesting that homosexual relationships were antithetical to Afrikanerdom.

Against this inglorious backdrop, Desmond Tutu’s strong, unequivocal statements in support of gay rights can only be welcomed. If genuine acceptance of homosexuality in South Africa is ever to grow, traditional and religious leaders clearly have an important role to play. Tutu makes it look effortless. DM

Photo: The former Anglican archbishop of Cape Town Desmond Tutu waves after receiving the 2013 Templeton Prize from Heather Templeton Dill (C), granddaughter of the late Sir John Templeton, and Lord Brian Griffiths (R) at the Guildhall in central London on May 21, 2013.  REUTERS/Paul Hackett