Cricket: No way out for Australia’s walking wounded -...

Cricket: No way out for Australia’s walking wounded – the quicks 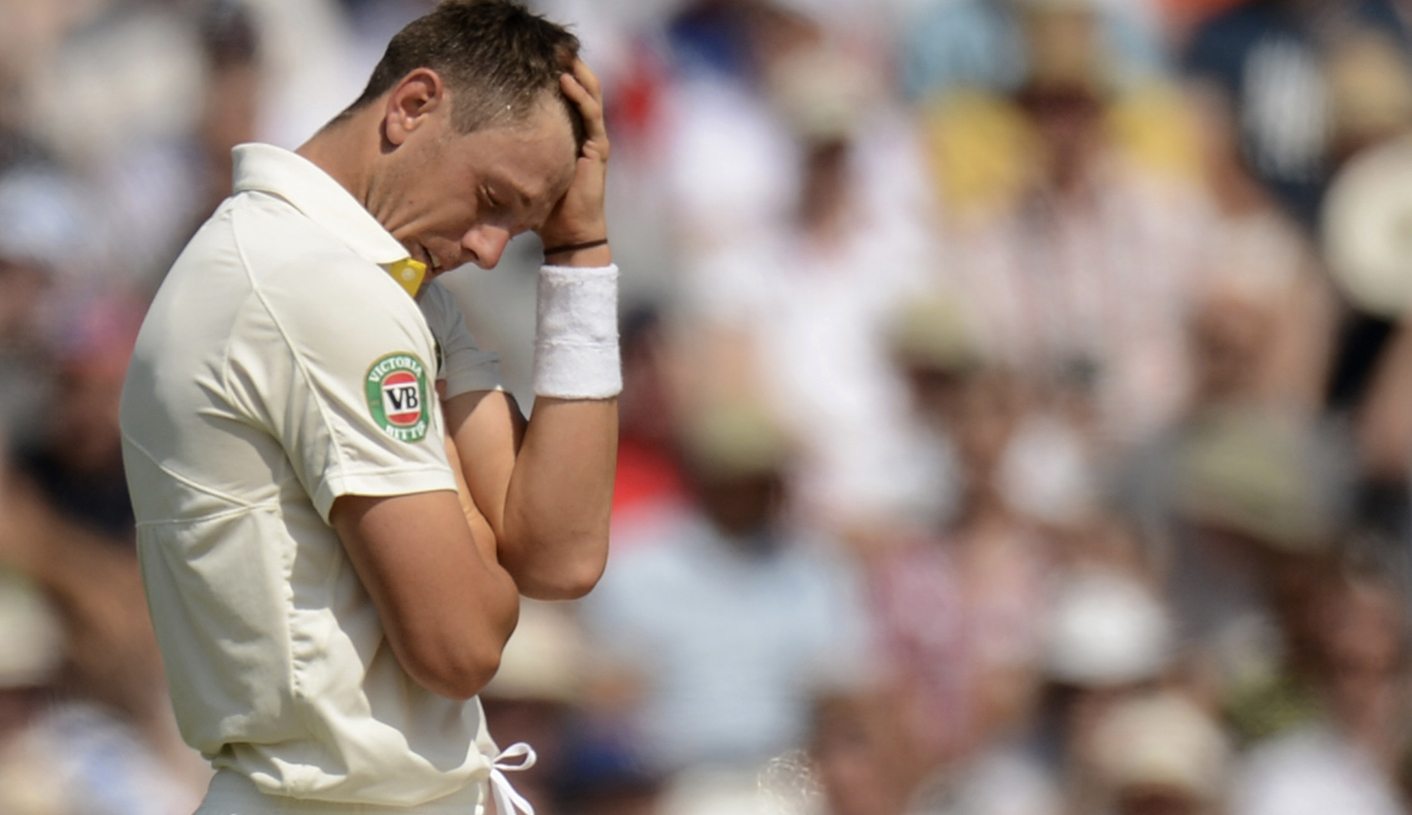 James Pattinson had to fight back the tears as he spoke to the press announcing he’d play no further part in the Ashes. Pattinson is out with a stress fracture for the rest of the series as the curse of the injured fast bowlers returns. Injuries have plagued Australia’s quicks over the last few years and it’s all the batsmen’s fault. BY ANTOINETTE MULLER.

In a research study done on fast bowlers in 2008 by the Nelson Mandela Metropolitan University, just 15% of the subjects remained injury free. The study examined 46 young bowlers, aged between 11 – 18 years, from March to November. Knee and lower back injuries were the most common and the study found an increased risk of injury as soon as bowlers’ workload started to exceed 20 – 30 overs a week.

It’s a small study, done on a much younger sample group, but the basics remain clear: the harder your bowlers work, the more likely they are to get injured. By that logical hypothesis, Australia’s bowlers are in some serious trouble.

James Pattinson has been ruled out of the remainder of the Ashes with a stress fracture in his back. Last summer, the quick suffered an injury in his foot. Over the last two years or so, the treatment table for the quicks in Australia has become pretty crowded. Pat Cummins, Josh Hazlewood, Ben Hilfenhaus, John Hastings and Ryan Harris and Shane Watson have all spent their fair share of time on it.

There have been a lot of theories around how and why it’s happening so often for the Australians. Most of the reasons are blatantly obvious.

Bowling actions are the first obvious thing. Bowling fast isn’t good for the body, it isn’t natural. However, athletes are trained to adapt to an action which feels natural. Some actions put less strain on some players than others. Some actions are “natural” or as “natural” as some sort of freakshow trapeze artistry can be. The problem arises when actions are fiddled with. Trying to bowl like Brett Lee or Glenn McGrath or anybody else who was effective – tweaking an action is forcing the body into a mould for which it was not made.

James Anderson is the poster boy for how tweaking an action can impact bowlers. When he started playing cricket, he had a spangly and weird action. Coaches intervened and tried to change it. He was injured all the time. Once he went back to what was natural for him, he remained largely injury free.

When forcing the body to do something which is not really natural, it should be done without interference. Even the most subtle change can make a significant impact to the body.

The other debate surrounds how much or how little bowlers bowl in the nets. Javelin throwing is perhaps the closest comparison to fast bowling, at least when it comes to the mechanism of using the body – channelling all your energy and using your entire body to release the energy through your arms and your fingers. Throwers generally don’t actually practice throwing unless they are in a competition phase. When they are doing training drills, it’s usually between 20 – 30 throws. That would equate to about five overs.

If the comparison is drawn to how much bowling is done in the nets, then bowling about five overs in practice is a reasonable aim in terms of work load. Of course bowlers also practice things like yorkers and “match-scenario” bowling on the square, but that is once again an action-related; it’s technique.

The biggest problem for Australia’s current crop of bowlers is the time they spend bowling in actual games. In the first Test, Pattinson bowled 51 overs in total and in the second close to 40. Relegated from opening the bowling in the second innings of the second Test after feeling tightness in his back, Pattinson almost knew that it was tickets for him by the end of the fourth day. Michael Clarke finds himself in an impossible situation. Watson can’t bowl too much. Harris can’t bowl too much. Peter Siddle can only give so much. Managing a group of players to their optimal capacity when half of them also need to be managed from injury is a thankless task for any skipper.

Every day of the second Test, Australia’s bowlers had to endure bowling warm ups at the start. That is not sustainable on the human body, no matter how fit or how well trained you are.

Since January this year, Australia have passed the 400-run mark in Test just twice. They’ve managed more than 300 just once (not counting the two 400 plus scores). In those 14 innings, they have failed to reach 170 four times, thrice failing to pass 150. Comparatively, England have passed 400 twice and 300 six times (not counting the two 400 scores) in their last 15 innings. They have just once failed to cross 170, with their lowest innings total in the last few months being 167.

Australia’s bowlers have been duped by their batsmen. Australia’s batsmen have failed to bat 90 overs seven times in 15 innings and have not once survived for longer than 142 overs. Their longest time out in the middle was 141.5 overs, against India in Mohali. The second longest is 133 overs and the rest is all below 120 overs.

Again, in comparison, England failed to survive 90 overs five times, but managed more than 140 overs six times. Occupation of the crease is as important for the batting team as it is for the bowlers, while the batsmen are doing their work out in the middle it allows the bowlers to put their feet up and their bodies to catch a break without being put through the continuous callous workout of bowling.

Bowlers will break, they’ll get injured, and the reasons will always differ. However, one thing is certain and anybody who has ever followed any sort of training programme will tell you: rest is crucial.

Australia’s bowlers, sometimes, haven’t even gotten out of the ice bath before they’ve been ushered back to the bowling markers, and it’s the fault of the batsmen. Or mostly, anyway. DM