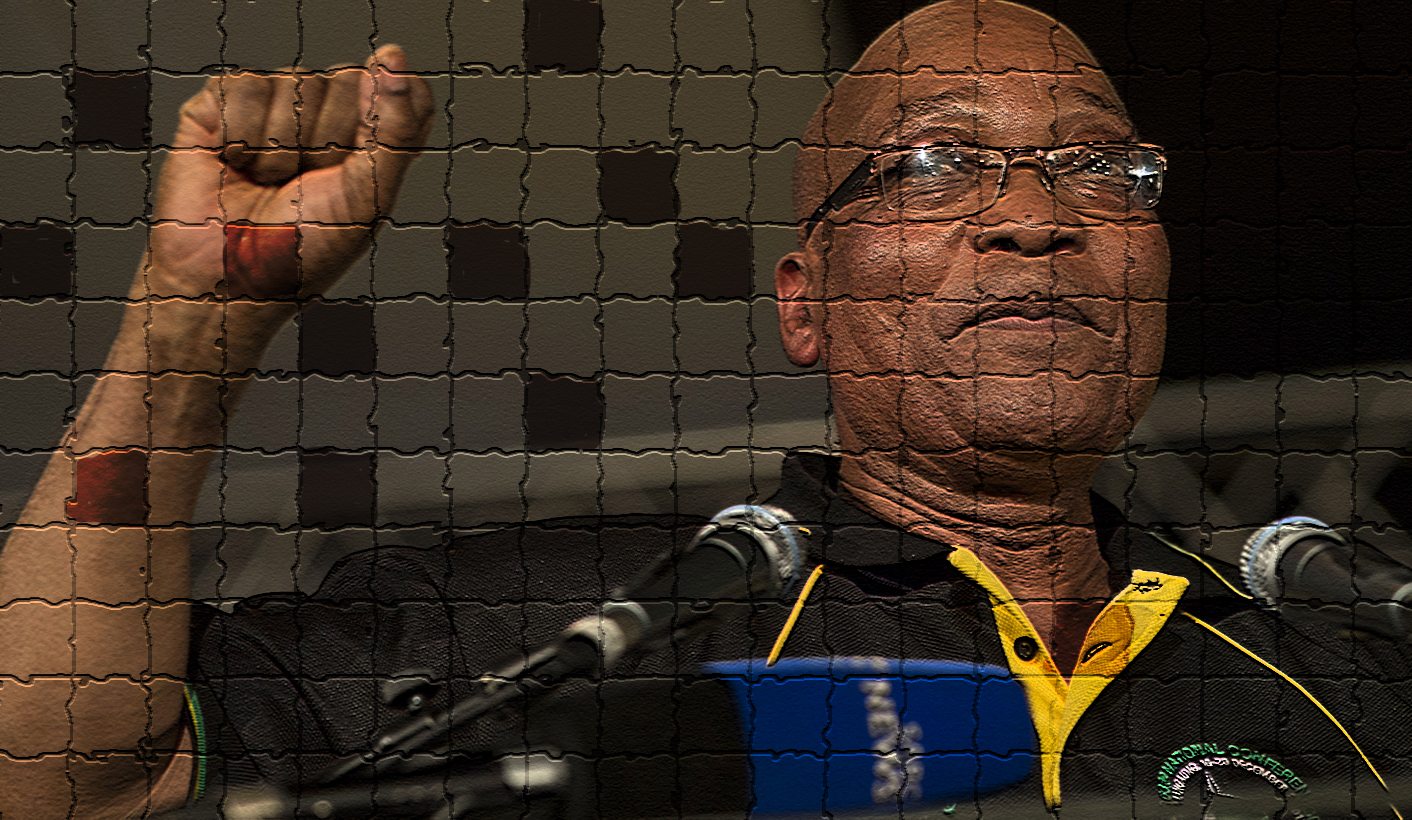 President Jacob Zuma is the man in charge. He is Politician Numero Uno. Unstoppable and unbeatable. Actually... Maybe not so much. It's time to look a little deeper into what's really going on. We probably won't find clear answers still, but a closer examination can most definitely reveal a lot. By STEPHEN GROOTES.

Wherever you go in the ANC, Number One is number one. In the party generally he is the champion of Polokwane, the re-anointed one of Mangaung. The person who really is da man, who has the party in his pocket. If you look through the provinces, he is insurmountable, in Kwa-Zulu/Natal, the Eastern Cape, the Free State, Mpumalanga and the Northern Cape, no one comes close. The North West ANC is in chaos, and no one cares about the Western Cape. The Women’s League answers to him through Angie Motshekga, and the Youth League is being run through Luthuli House. Only in Gauteng are there murmurings of unhappiness, but they’re still muted.

In the Alliance the same holds true. The SACP now resembles a church choir, singing the praises of he who will rule until the other Number One returns. Even the unions are now on the road to becoming fully Zuma-fied, as the process continues that could result in the defenestration of Zwelinzima Vavi, and the castration of Cosatu.

It looks very much like the ANC did back in around 2004 and 2005. No one could, or would, take on Thabo Mbeki. But two short years later, he was out of Luthuli House, and then out of power completely a few months after that.

There is a sense now that, while we might not actually see it, something else is going on. Something below the line. Not an organised rebellion, but certainly something that’s hard to explain or define.

But it’s probably Nic Boraine who has actually put his finger on it. He uses the word “brittle”, to suggest Number One’s grip on power is actually not as strong as it looks. That actually things are not as firmly in his grip, that there are events occurring every day that are out of his control. That the aura of absolute power is really a facade, a covering over a very complex and uncertain picture.

It’s an almost weekly occurrence now to see a former ANC comrade, someone with a strong struggle history, come out and criticise the party. If it’s not Ronnie Kasrils, it’s Trevor Manuel. If it’s not Manuel, then it’s Kgalema Motlanthe. What’s really scary for Zuma is that some of these people are still in office, if not necessarily in power. The point is, he is unable to stop them from doing this.

That certainly didn’t happen during the height of Mbeki’s power.

Then there’s the case of Vavi. Why would Zuma be using his people within Cosatu to get him out, if he weren’t nervous about him? To oust a popular leader in a backroom manoeuvre is always dangerous. You don’t know what could come creaking out of the closet. And there’s always the risk that that Vavi would be strong enough to do something on his own.

And it’s interesting to look now at the number of people who are annoyed enough, angry enough, frustrated enough with the current ANC, with Jacob Zuma, that they are doing their own thing. Just this year we’ve had the formation of the Workers and Socialism Party, the Economic Freedom Fighters, and Agang. While the wonderfully named WASP is perhaps an organically formed party, both the EFF and Agang are the direct results of frustration with the ANC. They are both led by people who the ANC would want, in the normal course of events, to have within its broad church. And they will get acres of media attention.

The fact is, the longer the ANC continues on its current path, the more people are leaving it. People with long track records, people who cannot be accused of disloyalty. When someone of Motlanthe’s stature says he thinks the corruption in the ANC will get worse before it gets better, it’s impossible to ignore it. It’s also impossible to ignore the fact he has not, up until now, been publicly punished for it. Because to do anything would be to reveal how absolutely on the money he is.

We also mustn’t forget that every time Luthuli House takes over the running of a structure, there are thousands of people who voted for the leadership of that very structure, whose vote has now been declared null and void. They’ve been overruled by Number One. In some cases, they’ll just drift away. In others, they’ll stay within the party and try to fight harder. Either way, they’re no longer friends of Number One. And could well start to look at the increasing number of alternatives on offer.

And this is where we have to look at Cope. Nearly one and a half million people voted for Cope in 2009. Remember, it had only existed for a few months. The point is, it was an alternative. Untried, untested, but still an alternative. That seven percent that Cope won is now up for grabs again. It’s hard to think many of those voters will chose the ANC this time.

At the same time, our middle class has grown over the last few years. People’s needs in urban areas are becoming more in common with the middle classes of other countries. And we’ve seen in Turkey, and North Africa, how once people achieve a certain level of prosperity, what’s next on their hierarchy of needs is political and constitutional rights. Whether that will translate into change at the ballot box is anyone’s guess.

And Zuma’s alliance will only start to weaken from here. In about two years, he’ll reach the point where people start to look to the future. The perception of a politician’s power is based not just on their current legal power, but also on the perception of their future power. Number One can’t be Number One forever. And by 2016, this publication will be full of speculation about who will become the new Number One, instead of our current fare of  Zuma diet.

Even in his home province of KZN, leadership ambitions will be unfurled, tensions will rise, and egos will be bruised. It’s happening already, with claims that some parts of the province want Zweli Mkhize released from his duties as premier, to concentrate on his other day job as ANC Treasurer.

There are so many dynamics to this, it’s hard to know how it will end. But there are a few crucial questions that we can ask. If we know the answers to them, we might know more about the future of the ANC. Will Gauteng actually verbalise its unhappiness with Zuma? If it does, how will Zuma react? Could more heavy-hitters leave the party? Would the same heavy hitters join some of the growing crop of anti-ANC parties? Would Zuma be able to lead the country, and the ANC through a major crisis, say another round of nationwide load-shedding? Would that impact the vote? What happens if Nelson Mandela passes, would that strengthen or weaken support for the ANC? If Vavi does go, what would he do, as popular as it is?

These are just some of the questions that are now up in the air. We won’t know the answer to all of them any time soon. But they do indicate how temporarily the Number One is the number one. DM