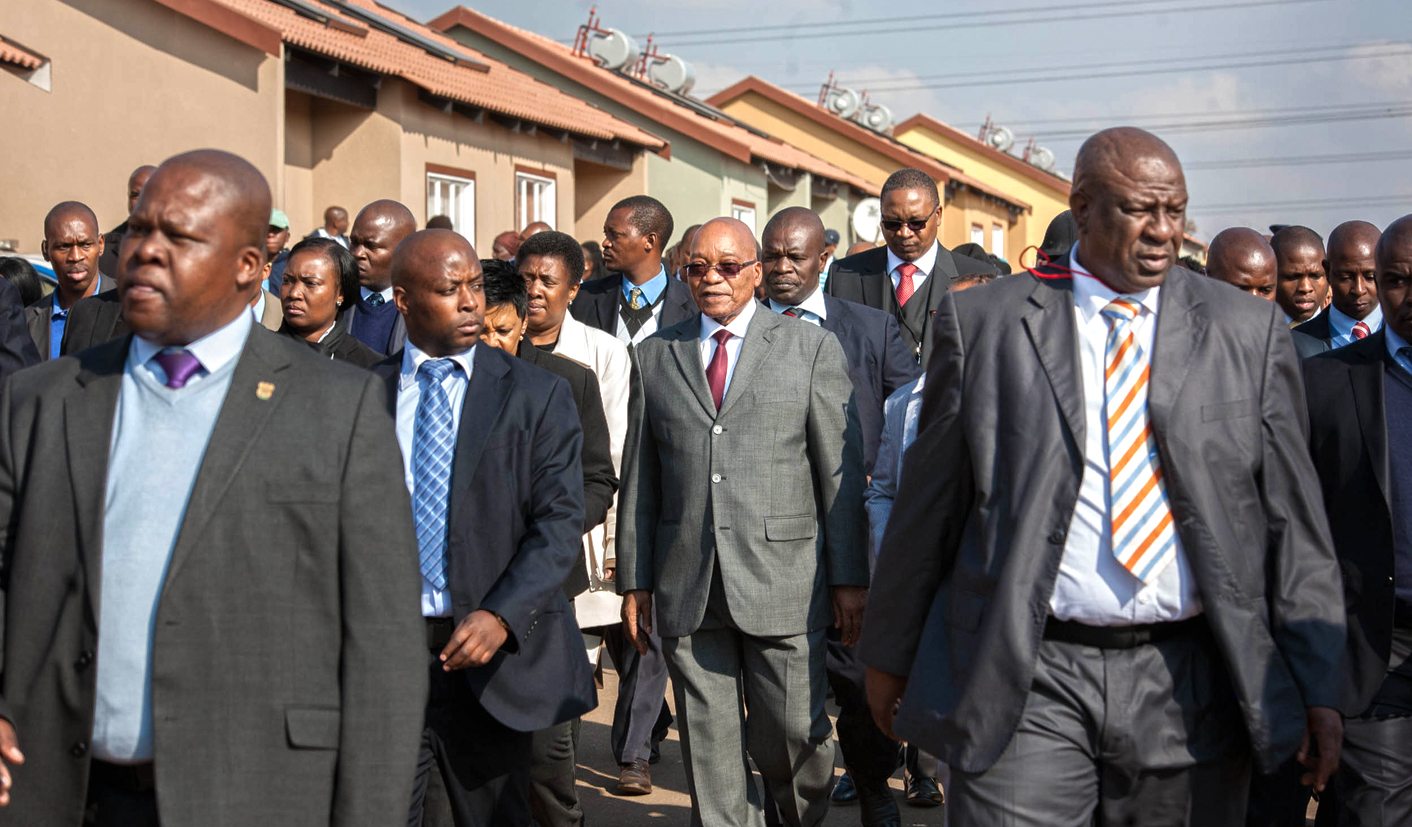 Before paying a visit to Nelson Mandela – who is reported to be improving steadily – in hospital in Pretoria, President Jacob Zuma spent the morning of Mandela Day at a new low-cost housing settlement that exemplifies Madiba’s values of service delivery and non-racialism. The president briefly sounded like a statesman. Gauteng Premier Nomvula Mokonyane, meanwhile, was looking to the 2014 elections. By GREG NICOLSON.

Zuma is not generally recognised for being a statesman, but he used his Mandela Day address at the Danville settlement to espouse the values of South Africa’s first democratically elected leader. There was more talk of nation building and less ANC/Nkandla/(insert other controversies) defending than usual. He got a warm reception from residents as his he and his entourage toured the government-built homes and said South Africans deserve a decent quality of life, regardless of race.

Photo: President Zuma addresses the crowd in Danville after visiting some of the community’s new houses. (Greg Nicolson)

The visit started the president’s Mandela Day. He then went to hospital to wish Madiba a happy 95th birthday and later saw a musical ensemble celebrating the Freedom Charter. “Let us return Madiba’s sacrifices and contributions through our own efforts to build a better society. Make every day a Mandela Day,” the president advised in his official birthday wishes.

Danville, in Pretoria West, is one of the three settlements where the Gauteng government aims to provide low-cost housing to both black and white citizens. Zuma visited the nearby Bethlehem informal settlement in 2008 where he was “shocked” to learn about the existence of poor whites. “I saw conditions I never thought I would ever see. I thought they were all doing well,” he said on Thursday, addressing residents from an ANC truck. His comments were eerily similar to other “shocks” the president gets on issues many South Africans live with on a daily basis.

Photo: Danville residents stand in the streets after being addressed by the president and Gauteng premier. The community is one of the province’s attempts to establish more integrated communities and both black and white live in its RDP houses. (Greg Nicolson)

“This is what we want to see,” he told the crowd, “where no one feels like they are orphans in a country of their own.” The value of unity and reconciliation is most present in such low-income areas, devoid of pretenses and bigotry, he suggested.

Photo: Esther Makalanchehe, 56, holds the keys to her new house in Danville in front of an ANC flag. Many of those who attended the event brought their ANC merchandise. (Greg Nicolson)

Residents cheered the president after he finished touring the community. One new homeowner told Zuma the bathtub in her RDP house wasn’t big enough for her large frame. “I agreed that I would buy her a new bathtub,” said Zuma to laughter.

The president hardly mentioned the ANC and it was left to Premier Nomvula Mokonyane to do the electioneering. The premier joined Tshwane Mayor Kgosientso Ramokgopa, and new Human Settlements Minister Connie September, in Zuma’s entourage. She reminded the crowd that Mandela would always be part of the ANC and repeated his comments that when he passes away he will find Oliver Tambo in heaven and ask for the nearest ANC branch.

Photo: Gauteng Premier Nomvula Mokonyane talks to a member of the crowd after speech about housing issues. (Greg Marinovich)

Mokonyane seemed to acknowledge Gauteng is set for a hard-fought election. Because 2014 is coming, she told the crowd, other parties would try to sway the community. Take their t-shirts to keep warm, but continue to vote ANC, she advised.

Early on Thursday morning, the presidency denied the Danville initiative was part of the ANC’s election campaign. “Government continues with its task of extending basic services to people who qualify regardless of whether there are elections or not. The president has been visiting this area since 2008, mostly as a guest of low-income white families,” said Zuma’s spokesperson Mac Maharaj. Fifteen of the 110 new houses went to white families and the rest to black families, he said in response to claims Danville was a white settlement.

David Madiba relocated to Danville after living in a shack for 18 years in an informal settlement. He applied for an RDP house in 1996. “A shack is bad. A house is better. We are happy, man. They are helping us. The ANC is helping us,” he said outside his new home. “The government is doing a good job. Now it’s mixing people – white, black, everything. All of us are happy. Nobody is going to sleep in the street now.” He is happy he has a white neighbour. “We’re going to learn something. Our kids are going to grow up nicely. They are going to talk different languages… We are the same… We understand each other.”

Nearby, Alca Rheeder and her husband Dave had settled into their new house after moving from Bethlehem Mission, one of Pretoria’s informal settlements known for white poverty. They applied for housing last year. “They keep their promises,” said Alca about the government. The couple was taken to view the houses as they were being built. They are happy to be in the community and have been getting on well with their neighbours, who are mostly elderly, they said. Asked about Zuma’s speech, the couple was encouraged when he said wants to help residents attain ID books, which will help them get pensions.

Photo: Alca Rheeder and her husband Dave settled into their new house after moving from Bethlehem Mission, one of Pretoria’s informal settlements known for white poverty. (Greg Nicolson)

Not everyone, however, was confident the government is doing enough to provide housing. Friends Theresa van Dalen and Martie Breeher both live in overcrowded houses and care for multiple children. They came to the event after another friend got a house. Breeher said she was promised a house in Danville and even received a stand number. Yet she wasn’t one of the whites to move into the settlement. Van Dalen, who clutched her housing application form, was unhappy that she applied three years ago while some families who received new houses had applied more recently. It’s positive that new houses are being built, they agreed, but said not enough is being done to help people in their situation.

Nelson Mandela is famous for his promises that the democratic government would strive to build a better life for all South Africans. The ANC says that since 1994 more than two million houses have been built for low-income families. Yet according to the 2011 Census, 2.3 million households still require housing. The system and discourse around housing delivery has been criticised recently as irrational and prone to fraud.

In Danville on Thursday, the president wanted to show that Mandela’s ideas of service delivery and the Rainbow Nation were still alive. Voters will decide whether they agree with him or not. DM

Photo: President Zuma and his entourage walk from house to house in Danville. One new homeowner told the president she is too big to fit in the bathtub. Zuma responded by promising to buy her a larger tub. (Greg Nicolson)