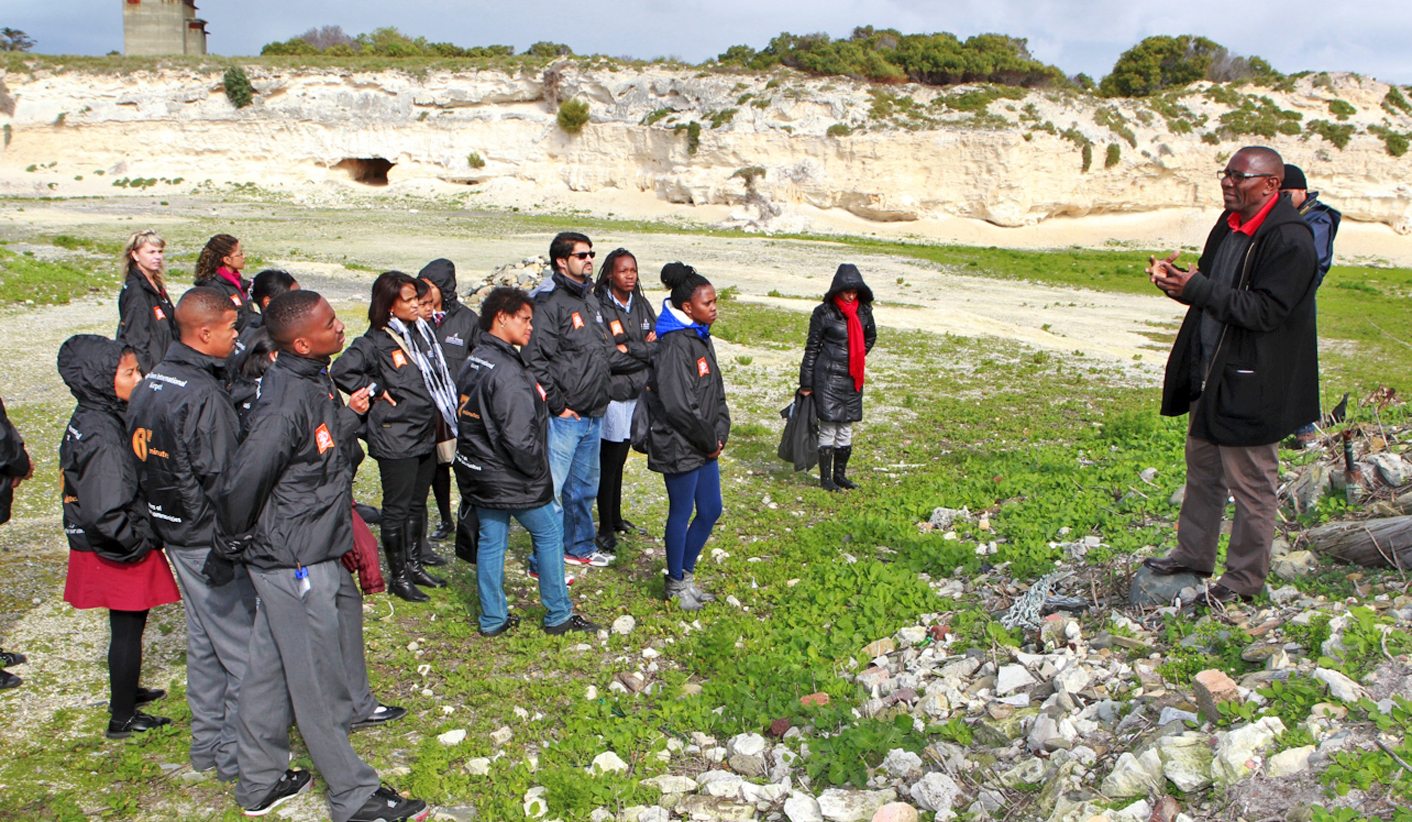 Where better to contemplate Nelson Mandela’s sacrifice than on the island where he spent 18 years imprisoned? On Mandela’s 95th birthday, REBECCA DAVIS joined 67 schoolchildren on a pilgrimage to Robben Island, where – even just for one day – icy winds couldn’t blow away a spirit of hope and promise.

It’s a curious fact that the DA won Robben Island in the 2009 elections. They took it from the ANC with 52 votes to 50; the first DA victory on the island since 1994, and one that must have been a bitter pill for the ANC due to its symbolism, no matter how paltry the votes.

“I vowed I would never set foot here again,” former political prisoner Grant Shezi told the Daily Maverick on Thursday, gazing around the tiny courtyard where prisoners would exercise. “Not from hate, but because the space would evoke memories.”

“We were nine in our group,” Shezi says, and begins to rattle off names. “Three were sentenced to death: Petrus Mashigo, Naphtali Manani and Noimbithi Lubisi. Then two of them got 20 years. Benjamin Tau and…”

Shezi was part of the so-called “Silverton Nine”, found guilty of high treason and attempted murder. He was initially sentenced to 15 years on Robben Island.

“I was accused number six,” says Shezi. “My co-accused was…” He pauses again and rubs his face. “It’s long ago.”

Shezi, a fulltime employee of the Heritage Department, now has an office in the corridor where his prison warders once stalked.

“I came back due to economic circumstances,” he says. “But when I look at it now, I look at it as a continuation of the Struggle in another form, to keep the stories for posterity and teach the young.”

There were plenty of young around Robben Island on Thursday: 67, to be precise. These were Cape Town Grade 12s who had won a competition run by ACSA (the Airports Company of South Africa) to spend the night on Robben Island and wake up there on Mandela Day. A number of different high schools were represented: Ravensmead High, Excelsior High in Belhar, Sinethemba High in Philippi, and more.

“They had to either write an essay or make a collage on the legacy of Nelson Mandela, and the ten best were selected from each school,” explained Isabel Botha, a history teacher from Ravensmead High. Botha was chaperoning the pupils in the company of her colleague Melanie Jansen, an English teacher.

When asked how the previous night’s sleepover had gone, the two exchanged looks.

“The learners found it very exciting, they had a ball,” said Botha, with a slight meaningful emphasis on the word “learners”.

“Well, obviously we had to look after them,” explained Botha. “And they were so excited that they woke up and started getting ready at 3am!”

When we caught up with the teenagers on Thursday morning, they were being taken on a tour of the prison by no ordinary guides: former prisoner Shezi and former prison warder Christo Brand. Brand was a guard on Robben Island between 1978 and 1982, and was transferred to Pollsmoor along with Nelson Mandela. Despite their respective positions, Brand and Mandela developed a close relationship. In 2010 Mandela celebrated the 20th anniversary of his release from prison with a dinner to which he invited Brand.

Of his friendship with Brand, Mandela said that evening that it “reinforced my belief in the essential humanity of even those who had kept me behind bars”.

“The prisoners would be stripped naked on arrival,” announced Brand, eliciting exclamations of horror from the teenagers.

“If you were sick you got one tablet,” said Shezi. There were gasps of “One?”

The content wasn’t all dark. The pupils hooted with laughter when Shezi told them of the misunderstandings that could arise if prisoners were attempting to remain penpals with two different girlfriends. “There are those who were Casanovas, and maybe you are communicating with two who are your girlfriends,” Shezi said. In the censors’ office, the letters might get swapped. “Then the ladies get cross!”

Khanyisa Mtswali, a Grade 10 pupil from Marian High in Elsies River, described their time on the island as “amazing”.

“We are very grateful and thankful to Nelson Mandela,” she said.

“But we’re kinda heartbroken because he’s sick,” her friend Colleen Arries chimed in. “Even though he’s going to leave his legacy, I guess.”

“It’s all thanks to his bravery,” agreed Tamlynn Hassien.

The pupils were summoned together to watch Robben Island CEO Sibongiseni Mkhize give the benediction for an apple tree to be planted. “Robben Island is an integral part of Mr Mandela. We might be the only group in the world that is privileged to have an ex-warder and ex-prisoner narrating their experience here today,” he said. Mkhize had a kindly warning for the kids: “Tata Madiba values education very much, so please, let’s not disappoint him.”

Grade 12 Siyathanda Mlengu said that her winning ticket to Robben Island was a collage. “I made a poster of Nelson Mandela and then I put all the quotes and comments from the Struggle,” she explained.

“I just did a drawing of him,” Athenkosi Vananda said.

Mlengu said she hopes to study journalism when she leaves school. Vananda is aiming for HR management.

“What I liked best about the Island was that I could ask a prisoner questions and he could answer and I was satisfied with the answer,” said Vananda.

They, like all the pupils, needed no urging to deliver tributes to Mandela. “We love him because he is the reason we are here today,” Mlengu said simply.

Shezi told the Daily Maverick that during his time on the Island, prison guards were very careful to keep Mandela and other “big guns” isolated from prisoners like him. But Mandela would write discussion papers, which would be smuggled to them via an underground courier system.

Shezi still maintains hope and faith in the ANC. “There is this new pandemic that we never thought of during the Struggle: that of corruption,” he said. “The ANC is an omnibus; it takes people from all walks of life. In my view they are working very hard to unite the country.”

For Shezi, even the idea that he can now lead a tour of Robben Island alongside a former prison warder is surreal. “When I participated in the Struggle I never thought I’d be alive when freedom comes,” he said. “I never thought I would be shaking hands with former jailers. But even then, we used to say: They are also deceived.”

Shezi halted outside the cell where Mandela spent so many years, stopping in order to emphasise his words. “It makes me laugh with excitement, that this is being realised while I am still alive. It may take hundreds of years, but we are here at the foundation of a better South Africa.” DM