The Whiffenpoofs: A whiff of a cappella 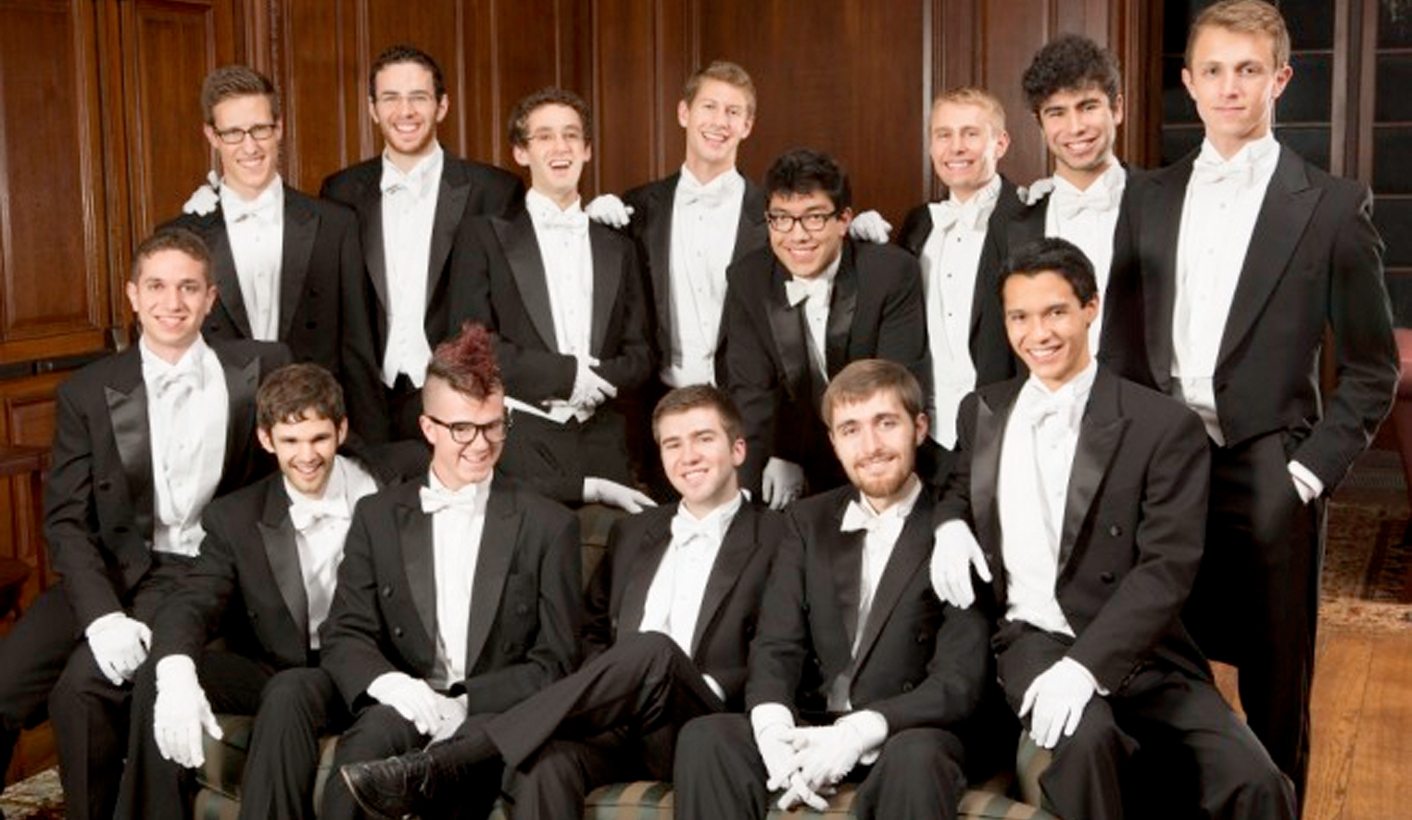 What do Osama bin Laden and George W. Bush’s grandfather have in common? They were allegedly both in a cappella groups in their youth. The unaccompanied singing style isn’t to everyone’s tastes, but in recent years, thanks partly to the success of TV series Glee, it’s become slightly cooler than it once was. This week, the world’s oldest college a cappella group – Yale University’s famous Whiffenpoofs – showed Cape Town what it’s all about. By REBECCA DAVIS.

The Whiffenpoofs – or ‘Whiffs’, as they call themselves – have performed for almost every American president since the 1900s, and appeared on TV shows ranging from The West Wing to Saturday Night Live. But during their visit to Cape Town this week, they added a new first: singing with the parliamentary leader of a country’s opposition party. At a performance on Monday for ‘Blue, the network’ (the DA’s social network), Lindiwe Mazibuko performed a guest solo with the Whiffenpoofs to the Mika pop song ‘Grace Kelly’. It was by all accounts rather good: Mazibuko at one stage pursued a Bachelor of Music, after all.

Tenor Brandon Levin, speaking to the Daily Maverick before a performance on Wednesday, sang Mazibuko’s praises. “She was fantastic, a real trouper. She couldn’t have been nicer, she was a pleasure to work with.”

The Whiffenpoofs were, on Wednesday, 87 days into a 27-country tour. That’s got to mean some strain, and one of their 14 members, Julian de Freitas, had taken ill and was unable to perform. De Freitas is unusual among their number because he is South African: “He’s from Woodbank,” Levin explained in De Freitas’ absence. (He meant Witbank.)

The 13 other Whiffs are all American, and all third-year students at one of the two jewels in the Ivy League’s crown: Yale. The other jewel, of course, is Harvard, but that’s a curse-word to Yalies. The Whiffenpoofs like to riff off the rivalry between the two famous universities for humorous effect. At Wednesday evening’s performance, Whiffenpoof musical director Andy Berry couldn’t resist dropping in a mention of a well-known Harvard alumnus – the Unabomber.

The composition of the Whiffenpoof group changes every year, and all members only stay in the group for one year. Getting into the Whiffenpoofs is considered an exceptionally prestigious accomplishment at Yale. “You need to have completed your third year, be a male, and be able to sing,” rattles off Levin. “There is an extensive audition process. You sort of don’t try out unless you know you have a shot.”

Despite their evident abilities, none of the 2013 Whiffenpoofs is a music student. Levin puts this down to the fact that the Music major at Yale is “very theoretical”, so it doesn’t serve students who hope to become performers. A number of the current Whiffenpoofs want to pursue a professional music career, Levin confirms. He is a student in ethics, politics and economics. Of the others, there’s a wide range of subjects covered, and a surprising number of scientists.

The commitment required of the Whiffenpoofs is so intense that the group members take an entire year off university, between their third and fourth years. New members are announced in February or March. At the end of August they meet up properly to learn songs and practice, and they spend much of the following year touring the world. “We just came in from Madagascar,” Levin said. From Cape Town, they were flying to Bangkok. Their tour will end in mid-August in New Zealand.

“It can be exhausting, but it’s a tremendous opportunity,” Levin said. He mentioned that despite their punishing schedule, they had found time to climb Table Mountain and visit Cape Point. “The only continent we don’t go to is Antarctica. And the Whiffenpoofs of 2012 actually did go to Antarctica.”

They are able to travel so extensively because of their distinguished pedigree, and their claim to be the world’s best-known collegiate a cappella group. The 2013 Whiffenpoofs are the 104th incarnation of a group which started life in New Haven, Connecticut, in 1909. Five Yale men would meet up weekly at Mory’s, a local bar, to sing and make merry. “As their fame on campus grew, the quintet began their search for a name,” the Whiff website records. “Denton ‘Goat’ Fowler, tickled by a joke featuring a mythical dragonfish named the Whiffenpoof, suggested the name to his companions, who found the name an apt reflection of the atmosphere of levity that accompanied the group’s gatherings”.

The 2013 Whiffenpoofs appeared on the finale of hit show Glee’s last season, playing a rival singing group called the Waffletoots. This is a week when Glee has been in the news for sad reasons: the death via drug overdose of star Cory Monteith. “We never met him,” says Levin. “He was in rehab at the time that we were recording.”

The genre of a cappella owes much to Glee, and to last year’s hit movie Pitch Perfect, for making the style seem less fuddy-duddy and more current; less the province of old men in coat tails. (The Whiffenpoofs, it must be admitted, do wear coat tails. And bowties. And white gloves.) “We’re lucky that we’re singing a cappella now, and other Whiffenpoofs had to suffer through the less popular years,” Levin admits.

Watch: When the Saints Go Marching in

Still, it’s unlikely that a cappella singing will ever be viewed as entirely rock ‘n roll. “A capella is sports for nerds,” wrote New York Times journalist Henry Alford earlier this year. Alford auditioned to become an honorary member of the 2013 Whiffs, and concluded that “by turns majestic and goofy, a cappella can be addictive”.

Some surprising figures have fallen prey to the lure of a cappella. Pulitzer-winning non-fiction account of Al Qaeda The Looming Tower, by Lawrence Wright, claims that Osama Bin Laden was partial himself. “Osama made an effort not to be too much of a prig,” the book records. “Although he was opposed to the playing of musical instruments, he organized some of his friends into an a cappella singing group. They even recorded some of their tunes about jihad, which for them meant the internal struggle to improve themselves, not holy war. Osama would make copies and give them each a tape.”

Other famous names with an a cappella past include actress Anne Hathaway, singer John Legend and journalist Diane Sawyer. Probably the most famous Whiffenpoof alumnus was songwriter Cole Porter. George W Bush’s grandfather Prescott Bush was also a Whiffenpoof: class of 1917.

South Africa has its own a cappella groups, including the Zamanani Brothers, who won attention around the 2010 World Cup. In 2012 it was reported that the group was struggling to raise funds – perhaps a sign that the current a cappella craze elsewhere hasn’t fully caught on here.

On Wednesday, the concert the Whiffenpoofs were performing was a joint show with the UCT choir. Two hours before the concert, the Whiffs and the UCT choir could be found practising a song they would sing together to end the show: Bright Blue’s Apartheid lament ‘Weeping’. The Yalies held sheet music to follow the song, which the UCT students didn’t need. “Here we go,” cried UCT choir conductor Kurt Haupt as they entered a big chorus.

“Some of us have heard the song before, some of us haven’t,” Levin said later, shortly before the concert was due to begin. “But it’s beautiful and we’re looking forward to faking our way through it.” Judging by the audience’s rapturous response, they did just fine. DM