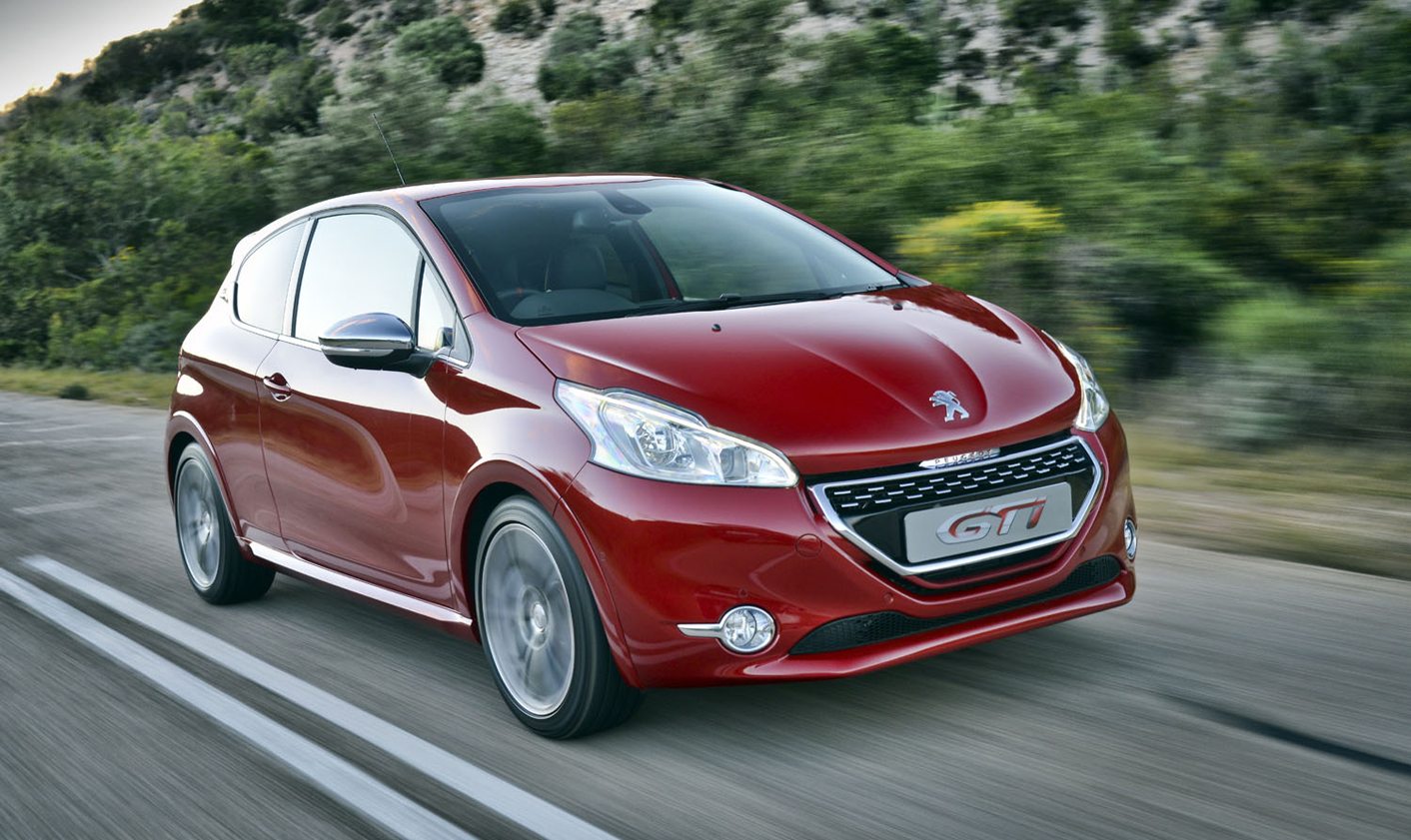 It may be winter, but there’s been a heat wave of hot hatches of late. And while the latest iteration of VW’s Golf GTI has been one of the highlights, the real action has been in in the smaller, pocket rocket sector. First it was Ford’s eager Fiesta ST, and now the Peugeot 208 GTi has joined the fray. By DEON SCHOEMAN.

Hot hatches, pocket rockets, muscle minis – call them what you will, but there’s no shortage of performance hatchbacks on the local market.

For many, the just-launched, seventh-generation Volkswagen Golf GTI remains the icon in this segment, with some strong competition from the Renault Mégane RS and the Ford Focus ST. However, it’s not the only hot hatch battle.

In the subcompact sector, the recently unleashed Ford Fiesta ST and the established VW Polo GTI are the main protagonists at present. But a new challenger has just appeared on the scene: the Peugeot 208 GTi.

The French marque is no stranger to this segment: to many, it was one of its early pioneers, with the 205 GTi still enjoying legendary status among the hot hatch cognoscenti. That car was known for its giant-killing capabilities, mainly because it combined low weight and a great chassis with a frisky engine to create a car with sublime and entertaining handling properties.

That was way back in the 1980s. Three decades later, the 208 GTi is returning to those illustrious origins with a package that combines a low kerb mass with one of the most powerful engines in its class.

At only 1,160kg, the new 208 GTi is 165kg lighter than its 207-based predecessor, while its 1.6-litre engine is 15% more powerful. The result is a power-to-weight ratio of 127kW/ton – an impressive figure for a small performance hatchback.

It also looks the part. The 208 is a handsome hatch in standard guise, and the GTI version adds further visual muscle. The tracks are wider front and rear, while a subtle body kit and bigger wheels create a more aggressive appearance. However, the overall impression is one of understated menace.

In fact, it’s the details that give the game away. Red-accented GTi badging confirms the car’s identity, while the hexagonal grille gets a more aggressive look, thanks what Peugeot calls a three-dimensional chequered flag effect: think alternating black and bright blocks.

The wheel arches embrace the obligatory bigger wheels and fatter rubber, while the geometric twin exhaust tail pipes, an extended roof spoiler and a pronounced lower rear apron add further visual zest to the rear. A swoop of chrome along the C-pillar is another, GTi-specific signature.

The exterior treatment may be understated, but the cockpit is a racy place, with form-fitting bucket seats, a flat-bottomed steering wheel, and metallic accents. Red stitching, an alloy gear knob, and unique instrument dials are further details that confirm the GTi’s performance positioning. But the way some of the trim surrounds fade from red to black may be taking the racy them a step too far.

Let’s not forget that the GTi is now the flagship of the 208 line-up, which means that it’s kitted out to the hilt. The touch screen display already familiar from the more luxurious 208 models is retained here, and allows access to a comprehensive infotainment system that includes satnav, Bluetooth telephony, audio streaming, and more.

A word about ergonomics: the GTi follows the entire 208 range in offering a smaller than expected steering wheel, which should be adjusted to allow an unencumbered view of the main instruments above the steering wheel rim.

It’s an unusual concept, and one that many find strange, let alone difficult to get used to. And it has to be said that for taller folk, there might not be enough adjustment scope to actually achieve the suggested steering versus seating position.

The three-door layout robs the cockpit of practicality, even if the front seats slide far forward to ease access. Once seated, rear occupants will find the accommodation adequate, but the GTi is not a family hatchback.

Perhaps more important, at least for those focused on the 208 GTi’s performance, is the four-cylinder lurking under the bonnet. Peugeot fans will instantly identify the engine’s specs as identical to those of the RCZ sports coupé.

The turbocharged four-cylinder has a 1.6-litre capacity, but still manages to produce a meaty 147kW of maximum power, together with a 275Nm torque peak. The gearbox is a six-speed manual, driving the front wheels.

Of note is the engine’s propensity for low-down urge. Despite the relatively small capacity, there’s no initial lag, with the full torque potential already on song from just 1,700rpm. The power max is reached much higher, at 5,800 r/min, confirming that the four-potter is happy to be revved, too.

The combination of small engine capacity and turbocharging also benefits overall efficiency and fuel consumption – although not to the extent that the factory figures claim.

The official statistics credit the 208 GTi with a combined-cycle consumption of just 5.9 litres/100km. But you’re unlikely to see even close to that frugality in real-world driving. And let’s face it, your average 208 GTi owner is not going to pussyfoot it, economy run-style, through town.

No sir, the 208 GTi wants to be driven with gusto, and in that context, a figure of between 7 and 8 litres/100km would represent a more realistic expectation.

Again, the stats most would-be owners of Peugeot’s little monster will be more interested in are those to do with acceleration, top speed and the like. And indeed, this is a quick little car – even if, at least at first, it doesn’t feel quite as rapid as its figures suggest.

The 0 to 100km/h sprint time is a useful 6.8 seconds, while the claimed top speed is 230km/h – numbers very much creditable by hot hatch standards, let alone pocket rocket contenders.

But the Peugeot’s real talent lies in its ability to maintain a consistently rapid pace over extended distances, almost regardless of road surfaces and conditions. It’s a measure of the car’s impressive poise and balance.

In fact, for me, the real highlight of the dynamic package is the chassis. It manages to find the perfect combination of damping and response. Thus, the GTi will soak up country road dips and bumps without becoming unsettled, while allowing a clear and unambiguous dialogue between car and driver.

The only exception is the steering, which feels slightly numb, even though turn-in is crisp and direct. It’s certainly a lot meatier than the normal 208’s steering, and it loads up well when driving with vigour, but there’s still a remoteness that robs the driving experience of some of its immediacy.

It’s a small flaw in an otherwise impressive handling performance. And the more you drive the 208 GTi, the more you discover the breadth of its talents. Grip levels are high, and there’s an inherent neutrality, even at the limit, that’s unusual for a front-wheel drive hatch.

Somehow, the car exudes a tautness of control and a directional precision, without having to resort to a bone-jarring ride or unforgiving damping. It is, quite simply, the most poised and most balanced contender in its class – and that means you get to use most of its performance potential most of the time.

The new Peugeot 208 GTi is more than just a hot hatch. There’s a patina of underlying sophistication that elevates it above the frenetic, hard-core action usually associated with this segment.

If anything, the car understates its capabilities and in doing so confirms just how capable that chassis is. It may not feel as sharp as some of its rivals – and hard-core petrolheads may accuse if of being less engaging as a result – but its overall capability and user-friendliness make it a tempting and ultimately rewarding pocket rocket choice. DM