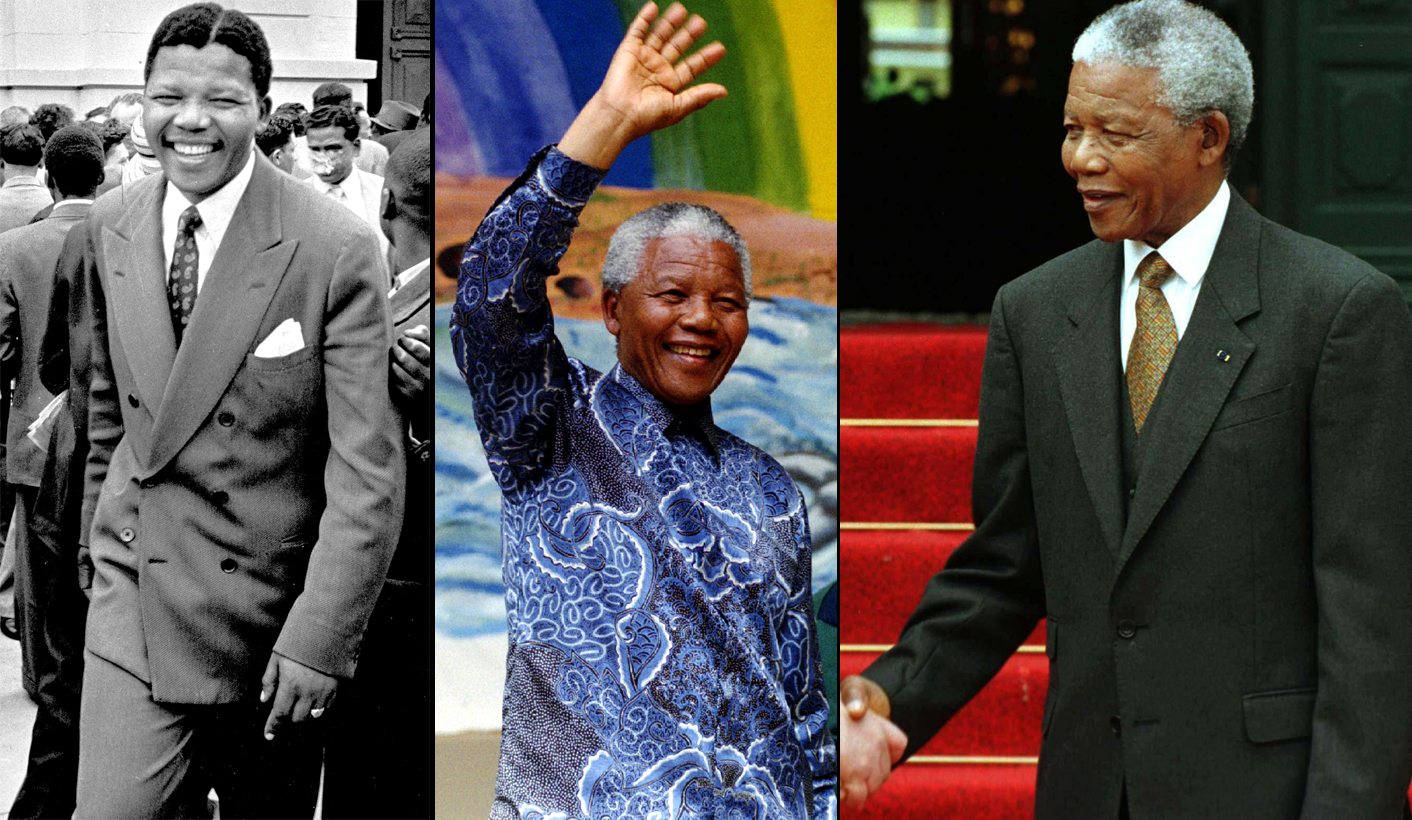 May 21, 1961: facing ITN’s Brian Widlake, Nelson Mandela gives his first television interview. A short beard ringing the lower part of his face, at the time fuller, he wears a plain jacket zipped up to the collar, over a white pair of pants. A strong contrast to Widlake’s conformist dark suit, Mandela breathes confidence and a defiant je-ne-sais-quoi. Twenty-nine years before he wore his first signature batik shirt, Mandela was already a style icon. By EMILIE GAMBADE.

If there were one outfit that would symbolise Mandela and that would remain an emblem of his style, it would have to be the familiar “Madiba” shirt made of Javanese silk batik or African fabrics. Created in 1990 by Sonwabile Ndamase, a fashion designer who was also close to the family, they were, and still are, the symbol of Mandela’s freedom.

After spending 27 years in jail, Mandela wanted to translate his liberation into a specific style, something that would tear down conformism and the sometimes-unbearable stiffness of traditional suiting.

“The decision to make a style statement was one Nelson Mandela made on his own. He wanted to identify with the people. The majority of South Africans never wore suits, so he wanted to have a specific kind of shirt made – cut long so it could hang over trousers, both coloured and plain, with the conventional pointed collar as well as the standing Nehru. As always, ‘Madiba’ wanted to do things his own way,” says Ndamase. “The result was a shirt that has made its mark on the world: never casual, always buttoned to the top, classic, well pressed, and usually in boldly patterned fabrics, such as West African damask, wax-prints and traditional Xhosa cloth with braid.”

The choice was astute: the shirt buttoned up to the collar, reminiscence of his 1961 interview, revealed a grounded attitude, a solid man with a sensitive allure, softly but firmly in control. The neck was held straight in its collar and the shirt was always impeccably crisp. And yet, it fell over the pants, in a well-thought-out négligé, and was worn without a jacket, as if not to be taken too seriously.

With this one shirt, Mandela gave to the world the image of a humble man ready to take charge and do things his way, differently. He dressed for the job he wanted, president of the people of South Africa. Long before Barack Obama and his rolled-up sleeves and tie-less suits, and long before he even became the president of our country, Mandela understood how to present himself and the importance of his appearance.

From an already young age, he was attentive to his clothes and valued the concept of elegance. In his biography on the former President, Mandela, the Authorised Biography, author Anthony Sampson notes: “The Regent, Jongintaba, otherwise known as David Dalindyebo, became Mandela’s new father figure. He was a handsome man, always very well dressed; Mandela lovingly pressed his trousers, inspiring his lifelong respect for clothes.”

Early pictures of Mandela portray him here, in a double-breasted suit, given by the Regent, already buttoned all the way up, the wide peaked lapels high on the chest, a white shirt and tie underneath, a handkerchief in the breast pocket; there, bearing the fashion as seen in the 1940s and 1950s’ in Sophiatown, wearing his favourite double-breasted suit Chicago-style, confident, the handkerchief still in place, a colourful patterned tie as a vibrant hint. His style was structured, fitted, his elegance undeniable.

In an interview by John Carlin, former ANC Youth League leader, Joe Matthews, explains of his time with Mandela at the University College of Fort Hare, “Mandela’s clothes always looked as if they had been specially picked, or they had been tailored to fit him exactly. Therefore, he was different. (…) He is a meticulous dresser and he picks his clothes, so it means he gives it thought. (…) Even when he was supposed to be casually wearing a khaki trouser, it would be a “khaki” trouser. It wouldn’t be gabardine. It would be the genuine thing. And this is very striking. (…) Yet, all of us were dressers. We all were fond of being well dressed and so on, but we were trying to emulate people like Nelson. Now he was like that even as a young person. (…) Where he picked it up, I don’t know, because you wouldn’t regard Transkei as the kind of environment in which people would be looking out for the best kind of clothes. (…) I think it’s just a characteristic of his, and maybe it reflects a kind of ego as well, wanting to be the best dressed.”

At his trial in 1962, Mandela defied the audience entering the court in a traditional Xhosa leopard-skin kaross of the Thembu clan, his half-naked torso plastered with a multi-layer bead necklace, his bicep bearing a golden arm-bracelet. Nelson Rholihlahla Mandela, a stylish “troublemaker,” was using his clothing to prove a point: “That day, I felt myself to be the embodiment of African nationalism, the inheritor of Africa’s difficult but noble past and her uncertain future. The kaross was also a sign of contempt for the niceties of white justice. I well knew the authorities would feel threatened by my kaross as so many whites feel threatened by the true culture of Africa.” (Extract from A Long Walk to Freedom)

Photo: Nelson and Winnie Mandela in their wedding photo from 1958. (REUTERS)

His audacity would not prevent Mandela from being imprisoned and suffering years of isolation, a prison garb and slip-on shoes as the only available options, a man and his style suddenly reduced to silence. “After three years of increasingly frequent meetings with government officials, Mandela was offered a secret meeting with President P.W. Botha on July 5, 1989. Prison officials realised they couldn’t send Mandela to the talks in his prison garb, so they called in a tailor to fashion a bespoke suit. But when the big day arrived, Mandela, who hadn’t put on a tie in decades, was unable to knot it properly. The prison commander immediately took it upon himself to remove Mandela’s tie, stand behind him and tie a perfect double Windsor knot.” (Extract, Mandela, the Authorised Portrait)

Mandela, at his release of prison in 1990, wore a grey suit, a white shirt and a tie. The outfit, nearly boring, was very symbolic to this moment of transition: the plainness of the cut and the dullness of the colour denoted a man in the making. The dark shadow of the past still obscured his bravura while the bright promises of tomorrow had yet to shine.

More than just a vehicle for his ideas, Mandela’s outfits have been the silent marks of his character, his fight and finally, his people. From the all powerful and strikingly elegant double-breasted suits of a man leading the resistance to Apartheid, to the zipped sporty jacket worn in his hideout, and the legendary batik shirts symbol of his freedom and a new South Africa, Mandela’s wardrobe has been a partner to every one of his moves. In the end, his outfits are the many colourful capes of a superman of the ordinary people. DM