Getting the EFF up: Malema’s making new friends 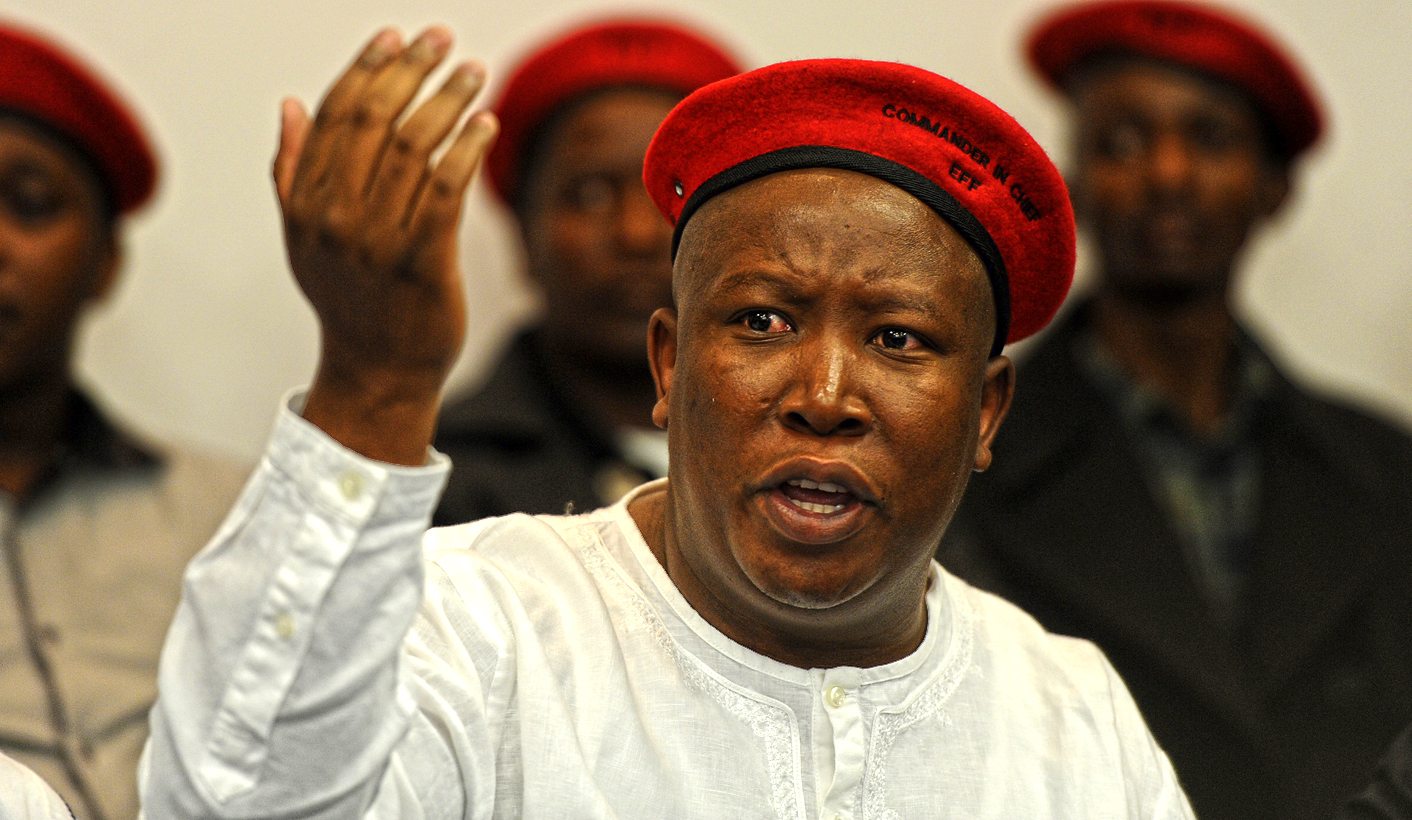 The news on Monday of Limpopo premier Cassel Mathale’s departure left many wondering if he had already been fitted for a red beret as sported by the legion of the newly established Economic Freedom Fighters. Mathale, however, is yet to reveal where his political future lies. In the meanwhile, Julius Malema is making new friends, and quickly too. By KHADIJA PATEL and THAPELO LEKGOWA.

Julius Malema’s new political project, the Economic Freedom Fighters (EFF) may have been the laughing stock of South African politics for a few weeks, but the nascent movement is fast gathering support. This weekend, the EFF in their distinctive red berets, met with the September National Imbizo (SNI) to formalise an agreement for the two groups to join forces in the pursuit of economic freedom.

The SNI, a “black consciousness, pan Africanist” movement describes its main objective as the promotion of dialogue around the challenges “facing our people and to make proposals for a way forward”. The aim of the dialogue is said to be to “present our people with a discussion forum as a mechanism to claim back our country from politicians and self-enriching elites; we want a democracy that works for the majority”.

Menzi Maseko, a member of the SNI from Kwazulu-Natal said: “SNI is a black radical social movement. It is aiming at achieving black liberation and economic freedom in our lifetime. We are also for land restitution without compensation.”

According to its founding principles, the SNI is not affiliated to any political party.

The SNI’s most prominent member, columnist and self-styled Bikoist Andile Mngxitama, has come out in support of the EFF in recent weeks, even rushing to Kenny Kunene’s defence on social media.

“Kenny Kunene and Mamphele Ramphele, what’s difference [sic]? I will shake Kunene Skhothane hand long before I touched that of Mamphele. She cut gold deals with Kunene’s friend, made profits from exploitation of black mine workers (blacks die and get sick from mine work). She worked for the mass murderer – [the] World Bank. Kenny went on tv, ate sushi from half-naked bodies. If he has mines, they must be expropriated,” Mngxitama wrote on Facebook.

But if Mngxitama’s defence of the sushi king was curious, it also highlighted the reception of the EFF among South Africa’s chattering class. Kunene and Malema, two of the most prominent supporters of the EFF are seen as socially tainted and morally inferior to the likes of Agang SA’s Mamphela Ramphele.

Writing in the Mail & Guardian last week, he said the launch of Agang had left him underwhelmed. “Our nation is crying out for leadership, a new morality and vision. I have seen the announcement of the incomplete, even reluctant, unification of the Azanian People’s Organisation and the Socialist Party of Azania, and the emergence of Agang SA. I’m not moved by these two developments – in fact, I’m underwhelmed. I don’t see anything new and exciting in them,” Mngxitama wrote.

He said the introduction of Agang has still left South African politics without something “new, bold, youthful, radical, brave and inspiring” to force real change.

And the formation of EFF has to him been “the most exciting development” in South African politics.

“It’s not irrelevant that 26% of the South African youth are said to be in favour of Juju,” he said.

Mngxitama is expected to be unveiled as an EFF supporter on Tuesday when Malema’s new political home formally announces the alignment of the SNI with EFF.

The EFF meanwhile are defining themselves as a non-racial movement, which is open to all those who abide or agree with its seven core principles, termed pillars:  “Expropriation of South Africa’s land without compensation for equal redistribution; nationalisation of mines, banks, and other strategic sectors of the economy; building state and government capacity, which will lead to abolishment of tenders; free quality education, healthcare, houses, and sanitation; massive protected industrial development to create millions of sustainable jobs; massive development of the African economy; and advocating for a move from reconciliation to justice and open, accountable government and society without fear of victimisation by state police.”

Mbuyiseni Ndlozi, a PhD candidate in the politics department at Wits University, was announced on Monday as EFF’s national spokesperson (taking over from Floyd Shivambu, who is now EFF’s commissar for policy development and research) said the ANC’s rejection of a radical agenda persuaded him to join Malema’s ranks. “There is a wind blowing in South Africa, the ANC went and rejected the radical agenda in Mangaung and disbanding the ANC Youth League, this left us despondent,” said Ndlozi.

With Ndlozi, who was widely tipped as a rising star in ANC ranks, now firmly entrenched in the EFF, Malema’s movement continues on its charm offensive. Also in discussions with EFF are said to be the secretary general of a militant Cosatu affiliate, a former cabinet minister and smaller left leaning political parties like Wasp.

Political analyst Ralph Mathekga, however, is unconvinced of the EFF’s long-term chances of survival.

“This whole thing is entertaining,” he told Daily Maverick. “It is difficult to take these guys seriously. What we are experiencing now is pre-launch excitement and because they are speaking the language ANC has abandoned people are willing to listen.”

He believes that the SNI will ultimately feel short-changed by the EFF.

“The SNI and people like Andile [Mngxitama] are excited by the radicalism EFF presents,” Mathekga said. “They are though about short term solution, as time goes and all starts to settle down people will start asking the hows and whens. People will evaluate them critically on how much are they willing to lose in order to achieve the radical policies they present.”

Certainly even among the early adopters of the EFF vision, there are detractors of Malema’s credibility. One mineworker said of the former ANC Youth League leader, “He serves the purpose and we benefit.”

The meeting between SNI and EFF over the weekend was also attended by the Landless People’s Movement and the Land Reform and Restitution Movement.

EFF has managed to effectively bring together organisations that have split over the years on various issues who now see Malema’s party as a common platform from which to work. Even the SNI was split in two until unity discussions last weekend papered over the cracks. Malema then has been an attractive enough force, either by the resources offered or his own stature, to attract smaller groups to lend him their vision for the country.

The EFF have adopted the Landless People’s Movement’s zero tolerance to evictions and also accepted the people’s manifesto of the SNI “with minor amendments”.

Malema’s call for Nelson Mandela to be treated at the Chris Hani Baragwanath Hospital can be seen in the light of these principles.

The SNI however has not been merged into the EFF. It will continue to exist “as an autonomous structure outside the EFF” but SNI members have promised to join the EFF as individuals as soon as possible, while the SNI will look to further its vision inside the EFF.

The ANC is not overly troubled just yet but the South African Communist Party may well be roused into claiming back its founding principles.

For now, however, Malema has been able to wrest public attention back to his political wizardry.

“South Africans are disillusioned by the ANC hence they get excited by everything. The black middle class – I don’t see [them] supporting this initiative as they are happy within capitalism and private land ownership.”

Most significantly, Mathekga believes those within the EFF itself will be the undoing of its radical politics.

“None of those taking part in EFF have the discipline to sustain or live up to the radical policies they propose,” he said. DM