The cast of the holy EFF

The cast of the holy EFF 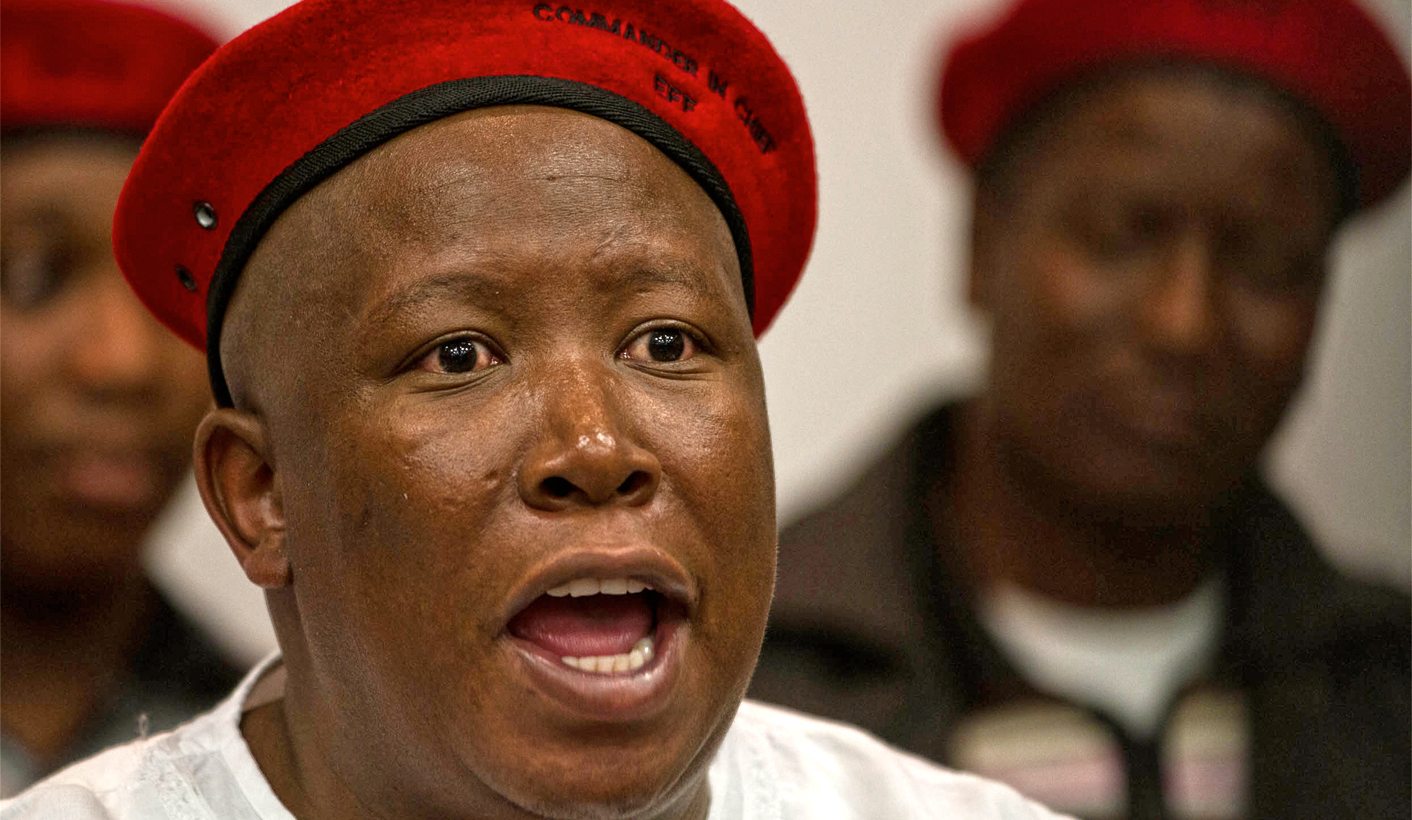 Twenty years after the brutal Apartheid state was vanquished, a pall has descended on the country. The ballot box has not delivered the promised freedoms and a cleaver cuts the population between those with jobs, Range Rovers and mansions and those with shacks, riding in taxis and grasping for hope. One man says he can fight the tyrants. Julius “Juju” Malema and band of mighty heroes, cast into the shadows by a rogue’s gallery of former friends, say they will fight the enemy, President Jacob Zuma and white minority capital, and deliver power to the people. These are the Economic Freedom Fighters. Their task is great, their stories comical. By GREG NICOLSON.

Malema, alias Juju, came to life in the Polokwane township of Seshego where circumstance determined his revolutionary credentials. Born the son of a domestic worker, relying desperately on friends and a canine companion for support and supper, he challenged fate and became president of the Congress of South African Students. The dark arts of high school classes were second place to politics as he moved to Johannesburg to light a fire under youth who demanded a better education, taking to the streets with relentless abandon, no matter the amount of vandalism or looting required.

As president of the African National Congress Youth League, Juju wielded his intoxicating powers of rhetoric to champion the ruling party’s cause. When Jacob Zuma was slapped with corruption and rape charges, his strength took JZ from potential prisoner to president. When the party bowed to the sunset clauses, it was Juju who whipped up a storm over nationalisation of the mines to get them to reconsider. When BBC journalist Jonah Fisher pointed out that Malema had a property in Sandton, the suburb Juju was mocking, Juju called him a “bastard”, “bloody agent” and “small boy”.

Yet the ANC viciously attacked him once the revolutionary Juju turned against the president and party rules. He was banished to the political wastelands, expelled from the party and set-up on corruption charges, which surely have nothing to do with the multiple properties he owned, the fancy cars or his famous Breitling.

Left for dead, he has boomeranged as leader of the Economic Freedom Fighters and his strength is his voice. That voice reached the millions in poverty and the dozens at the press conference on Constitutional Hill in Johannesburg on Thursday. He can turn any situation like a spinning wheel, describing himself as a martyr while putting the faces of Zuma and white minority capital on a dartboard. Listeners are spellbound at his acerbic jokes and ready to fight for what the ANC has lost.

Yet no one can really know Juju. His public persona is silent on his weakness for life’s luxuries and Johnnie Walker Blue, only displaying the vice to those it will impress. With great power comes great responsibility, and Juju, head of the EFF troop, has seen the light. He is mistrusted and feared by whites but continues to fight his ruthless opposition, the liberty-denying ANC comrades who forgot him.

“Revolution is about pain. Revolution is change and change is pain,” he told media on Thursday. “Those who thought we had disappeared must think again. We are going to be more radical,” he warned his enemies between promises to expropriate land and mines without compensation. With corruption charges bearing down and the president waiting for the imminent brawl, Juju sat at the ready, a white dashiki on his chest and a red beret bearing the words – EFF “Commander in Chief”.

Big Nyiko Floyd Shivambu, Juju’s right-hand man, also a university student, sat quietly during Thursday’s press conference hiding his molten tongue and dogged loyalty to his boss. He’s the man at Juju’s side when disenfranchised youth need to be organised, when girlfriends and fiancés disappear, and when the media consort with white minority capital to slam his friend.

Floyd is there to take the punches and will deliver some of his own – the Economic Freedom Fighters predicted that the attacks would only increase in the days ahead. Before his suspension from the ANC, Floyd was renowned for his use of words. “I wouldn’t want to earn respect from white bitches… So dream on,” he told a journalist by SMS.

But as the first member of EFF’s national central command team, he will need to channel his temper for the organisation’s seven pillars of virtue – expropriation of land without compensation; nationalisation of mines and banks; building government capacity; free education, healthcare, houses and sanitation; job growth through industrial development; a focus on the African continent; and an open, corruption-free government. He promises to bring the same quality that he does to his magazine Loocha, as independent and objective as The New Age.

Ramakatsa is the grounder. As the national coordinator of EFF he hits the ANC with its own weapons – long-winded answers and democratic detail. On Thursday, while Malema used his voice to drag down the ZANC (Juju’s term for what the ANC has become: Zuma (Z) plus ANC) Ramakatsa was the voice of radical moderation, clarifying his leader’s well-versed revolutionary clichés with an older voice to appeal to those who cannot get an NYDA grant.

He was impelled towards EFF after continual problems with the Free State ANC, the fiefdom of Ace Magashule. Ramakatsa led his Regime Change group in protesting the re-election of Ace as the provincial head of the ANC by taking the matter to the courts. Without luck against the scowling premier, Ramakatsa likely looked at his options and realised EFF is a better option.

The Sushi King is listed as the second member of EFF’s national central command team. With a previous conviction, he offers Malema and Co. valuable advice on what to do if convicted. He also represents what a significant portion of the voting population desire – an unapologetic lifestyle of debauchery with over a dozen young girlfriends and the ability to look like a black, young Hugh Hefner in a dressing gown.

While his political credentials remain mired in mystery, Kunene offers sound financial prospects to the group. His own fortune is reportedly declining but the Sushi King is a vanguard of the izkhotane. If he instructs the youth to stop burning money and instead donate it to EFF, the new political movement could be in for a windfall. Kunene did not address media on Thursday, which may or may not be because there were females in the room whom he is yet to bed.

Together, they call themselves Economic Freedom Fighters. Thousands are interested in the group and provincial heads have been appointed to establish local revolutionary structures. While South Africa remains a place of extreme division, they remain a source of hope (if not for economic transformation, at least for the parties they’re bound to throw). Rallies and conferences to decide on policy and elect leaders await. The ANC and its tentacles in the arms of the conventional security agencies will watch their quest. As devoted fighters, their legend will grow. DM