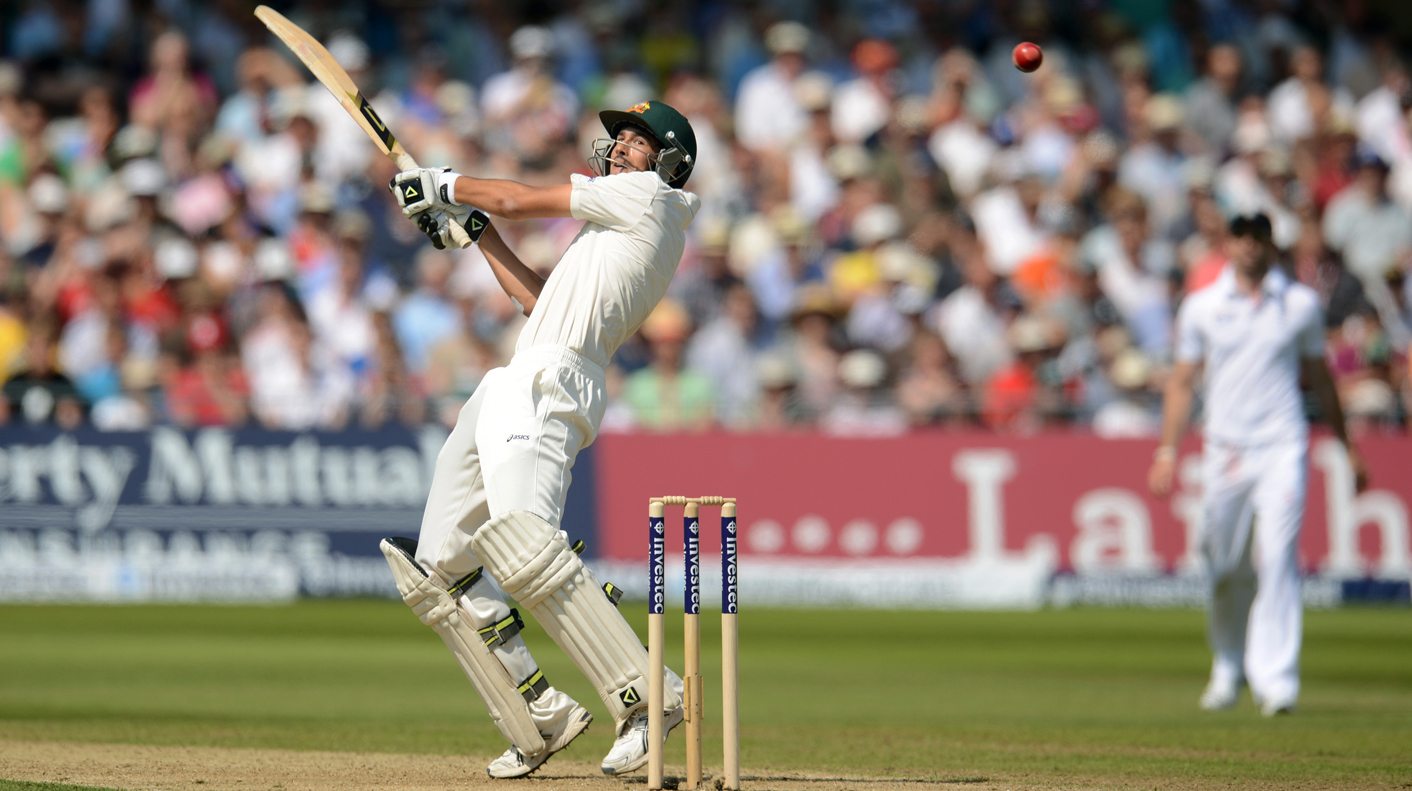 Ashton Agar, a 19-year-old with just 10 first class games to his name, put England’s bowlers to shame on Thursday. The debutante scored 98 – the highest ever for a number 11 in the history for the game – as Australia somehow managed to claw themselves out of a deep, dark and damp hole. BY ANTOINETTE MULLER.

While the blips on day one at Trent Bridge could have been put down to first-day jitters, there was nowhere to hide on day two. It was a day of old school rear-guard and controversial technology debates with the shovel digging a hole being passed from one team to another.

It’s been just two days, but the Test is already into its third innings. Just before lunch on day two, it looked like England would be have their foot on Australia’s neck by the end of play. However, an outstanding effort from Ashton Agar at number eleven, partnered by Phil Hughes, ensured the pendulum of momentum kept on swinging.

The day ended with England 80-2, just 15 runs ahead in their second innings. Skipper Alastair Cook and Kevin Pietersen knuckled it down to see their side to safety for the last 35 overs of the day. The pitch continued to flatten out as the sun baked down at Trent Bridge, but that was a subdued day to a breathless day.

The tourists resumed the day in a spot of bother. At 75-4, still well behind the hosts, a fine batting effort was needed. Steven Smith, so often berated for his unorthodox approach, managed to notch up a fifty, his fourth in 15 Test innings. That should have set the tone and settled the nerves, but Australia don’t like things done the easy way.

They proceeded to lose five wickets for nine runs in 31 balls to put themselves well and truly on the back foot. At nine wickets down, nobody could have imagined that a 150-run partnership was due in fewer than 30 overs.

England’s bowling, so utterly spineless, was exploited by debutante hero Agar. So spineless was the attack that they now hold the dubious honour of having two of the highest scores by a number eleven against them. Agar, a surprise debutante, drove, hoicked and slapped his way to a memorable and entertaining 98. That knock not only erased the deficit for the tourists, but it even edged them into the lead.

The 19-year-old, who made his first class debut in January, upstaged all his teammates, much like Australia’s lower order has done throughout this year. Earlier in 2013, Mitchell Starc scored 99 at number nine, but there is yet to be 90 runs scored by anyone in the top three. Such is the fragility of their batting, but that worry can be put to bed, for now.

It wasn’t the first time Agar was the highest run-getter in a team. Earlier in the year, he notched up 76 in an Under-19s 50-over match – more than anyone else. He also picked up three wickets for 20 runs in 10 overs as his side, Western Australia, cruised to a 100-run win. That, of course, was a completely different format, in a completely different setting and with a complete contrast in quality of cricket. But it should be noted that Agar’s aptitude should not be doubted. He is a breath of fresh air. In an Australian culture dominated by brashness and arrogance, his humility is endearing.

His feat was incredible, resilient and fit for a king’s entertainment. It was, however, spurred on significantly by England’s dross bowling. Their bowlers had seemingly forgotten the art of bowling yorkers and Alastair Cook’s conservatism in his captaincy did him no favours. By the time Agar was out, for 98 trying to pull a shot away to take him to the magic hundred, Australia had a lead of 65. That was an inconceivable score when the debutante walked in at 117-9.

Agar and Phil Hughes, whose role should not be underestimated, saved Australia from being completely down in the dumps. The momentum had swung again and it was up to Joe Root and Cook to wrestle back control once more.
Root was given out caught down the leg-side off Mitchell Starc for just five. The opener still had a first-day jitters hangover and was sent on his way.

With the day already so jam-packed with action, it would have been obtuse to think it’d go without controversy. It came off the very next ball when Jonathan Trott was given out under dubious circumstances.

Trott was given not-out by the on-field umpire and the Australians decide to opt for a review. From first glance, nothing aside from an edge on his bat could have saved him. There was nothing on the front on Hot Spot, but there was a technical issue with the side-on camera and the footage could not be viewed.

Up in the third umpire’s box, Marais Erasmus decided that Trott had to go. Aleem Dar, the on-field umpire, shrugged and shook his head and overruled the decision. Trott seemed convinced that he had edged the ball, but Snick – which doesn’t form part of the review system – showed no noise as the ball edged past the bat. England, though, were not content with the decision and they will be seeking insight into why it happened. They feel that, when a decision is reviewed, it cannot be overturned when all the sufficient technology isn’t available. It’s thrown the review system right back into the spot light. Despite it now having been in use for a sufficient amount of time, it still seems as if though there are grey areas that nobody wants to make an authoritative decision on.

Trott, nonetheless, had to go. The pendulum had swung once more and England were 11-2, still behind Australia. Cook and Pietersen, though, managed to hold on. Cook, his calm self and Pietersen without any of his usual irresponsible approach.

By the end of the first day, Australia had the choice of fight or flight. After the horse briefly bolted, it managed to find some impetus and dragged itself back to take on whoever stood in its way. If that’s what can happen in just two days, day three has a lot to live up to. DM