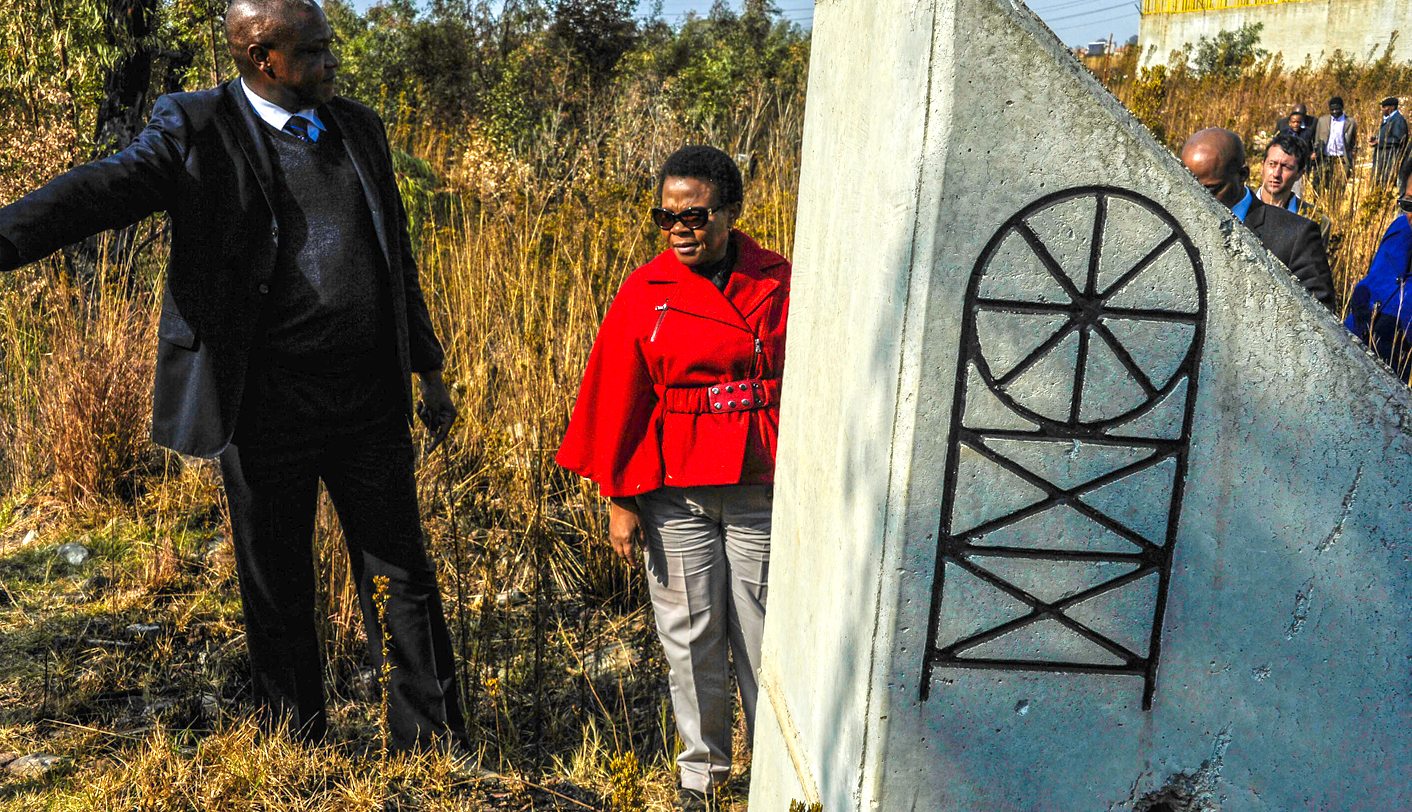 On Wednesday the Minister of minerals and Energy Susan Shabangu embarked on a field trip to see and show the media spots where illegal mining was taking place on Gauteng's Main Reef Road area. But as it happened many times before, the life remained the same for the affected communities. By THAPELO LEKGOWA.

Early on Wednesday at the Roodeport Civic Centre, the minister was in a closed session with mining stakeholders, including immigration, affected community members and South African Police Service. Outside the Civic Centre building were police cars, vans and trucks (four room), metro officers and immigration officers.

I was convinced that today illegal miners would be arrested; illegal migrants would be detained and deported. In other words, a little bit of action.

Once the briefing was complete, armed with my camera, I benefited from following the blue light brigade. We legally sped through Roodeport and within no time were driving on Main Reef Road, the once gold-bearing vein that today runs from Johannesburg CBD to Randfontein along the line of car dealers and scrap yards – as well as the nice face of South Africa shacks.

On both sides of Main Reef Road, to everyone’s shock, there is mining taking place. Move over Lonmin, AngloGold, Ashanti: here come the zama zama (most popular name that brings fear with it), bread winners etc. Here you have mining where there is never a strike. Both men and women are mining claiming poverty has driven them to this dangerous form of earning money, or just plain making some kind of living.

The operations are well co-ordinated; the shafts are not world standard, but still, gold can be extracted from the rubble that they collect on a daily basis.

Photo: Minister Susan Shabangu confronting a female crusher and letting her know that she is part of an illegal activity. (Thapelo Lekgowa)


Durban Deep gold mine closed its shafts around 1993. The rubble they left on the surface is part of what is now being mined.

Who said mining had to be expensive? There are collectors (rock drillers), who are normally men whose role is to select precious rocks that look like rubble or rubbish to your average person, but are potentially gold-bearing.

Then there are two types of crushers:

The first are usually women (even those with children on their backs) who crush the specially selected stones using a coarse stone until they get to a finer product.

The second type of crushers is usually men who crush the stones to a finer product by using heavy steel balls inside a container that can be manually spun.

When the crushing is complete, the finer product is moved to a washing basin (wash plant and shake table) to begin the separation process. If lucky, one could come out with some gold dust, which will be taken to the smelter for final processing.

Photo: A man standing behind a bakkie after being questioned by police. (Thapelo Lekgowa)


For smelters, there are three options:

Upon arrival with a heavy police presence and immigration staff we (including the negatively affected residents) expected the operations to be shut and never to operate again. We expected whoever was found there to be arrested and their identity documents to be verified. And where it was found that they are in the country illegally, they would be deported. This was not the case, however. The minister allowed the “illegal miners and illegal immigrants” to get away. It appears this operation or outing was more to show the minister that illegal mining does exist and it needs to be dealt with.

One of the sites visited was Matholeville, an RDP settlement that is fronted by shanties (shacks) facing Main Reef Road. It is in everyone’s face. One can never drive past there and not see mining activity. Upon arrival and as soon as the illegal miners (men and women) caught sight of the convoy, they took their valuables and ran into the settlement.

Photo: A female illegal miner in Matholeville ran away from the minister and police with content believed to be gold dust. (Thapelo Lekgowa)

Out came the community members celebrating the presence of the minister, telling her about the challenges they face because of illegal mining activities:

“We have no water here, we need to wake up very early to fill our buckets or we will only get water again at 6pm”. (Matholeville has taps with running water but the illegal miners have taken over the running water during their working hours.)

One other woman, after standing and watching community members reporting to the minister, said:

“I don’t think you should be telling on this people, the police and ministers are leaving and you are staying back here”. She further explained that when they ask the illegal miners about how their activities are affecting them, they respond by saying “if they stop mining, the next best income generator is to rob the community members”.

It appears that the majority of the miners are from Zimbabwe and Lesotho. While South Africans are also taking part in the mining, it looks like they represent a very small percentage.

A community policing forum member, who is also a resident in the area (who declined to be named) said:

“The operations have been active since 2010: we caught 84 of the illegal miners once and in no time we had 80 of them out on the street again,” he said. He blames the NPA for not following up with this case. He said although he continues to fight crime in his area he was deeply demoralised. One of the local police officers said “once these guys appear in court, they are released because we are told they don’t have gold, it is soil they have, not gold”.

No one has an idea of who is the real money-maker in the operations; everyone you meet will tell you they work for someone. Some of the women who were found crushing said they are employed and are paid R50 to R100 a day. When asked why they are doing it they said, “we are doing this to support our families and not stealing from anyone”. It is claimed by some of the residents of Matholeville there are at least a thousand women crushers with babies on their backs in the dust all day, a claim Daily Maverick could not independently verify.

It will take something better than Tactical Response Team to scare the illegal miners. As soon as the minister and police started moving from their territory it was back to business as if they had just performed a fire evacuation drill.

After the ministerial entourage was gone, the community members went back to being the ones feeling the heat as they claim they fear the illegal miners and face constant abuse from them. The minister also listed the environmental hazards that the community is facing.

When the minister was asked about law enforcement on illegal miners, she said: “If you look at the jails in South Africa you will see that they are overflowing, people are being arrested every day.”

What are the difficulties the police are facing to do away with the illegal mining? “It is not hard, police need to be given a chance to do their work and they cannot do it with us here.”

The minister’s visit was more an awareness campaign for her. The community’s hope was for closure of the sites and restoration of the little services they once had. And as it happened so many times in South Africa, these two trajectories are still doomed never to meet. DM