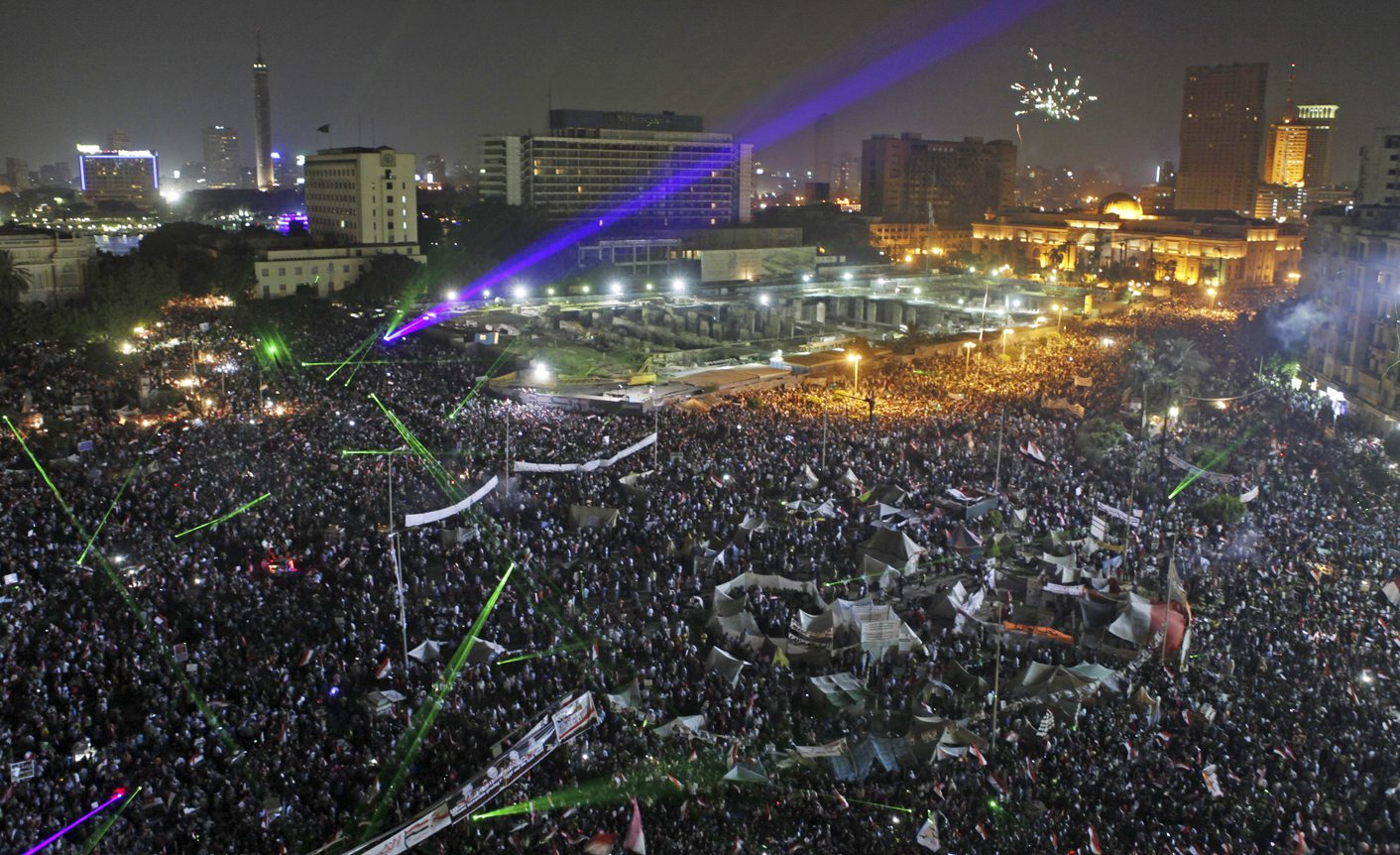 Hundreds of thousands of supporters and opponents of ousted Egyptian President Mohamed Mursi gathered in Cairo and Alexandria on Sunday, two days after similar gatherings led to nationwide clashes that claimed more than 30 lives. By Shadia Nasralla and Tom Perry.

The huge rallies, which began to thin out towards midnight, have been largely peaceful, but a military-backed plan to resolve the political crisis remained bogged down by infighting over who should be interim prime minister.

Protesters opposed to Mursi crammed into Cairo’s Tahrir Square and at the presidential palace in a festive atmosphere. Unlike Friday there were no running street battles with Mursi’s supporters, despite a much bigger turnout.

Those who backed Mursi and his Muslim Brotherhood movement concentrated in large numbers outside a mosque in the northeast of the city, and outside the Republican Guard barracks where Mursi was being held and three people were killed on Friday.

“We will not leave until Mursi returns. Otherwise we’ll die as martyrs,” said 55-year-old Hanim Ahmad Ali Al-Sawi, wearing a veil over her face in the searing sun, as soldiers and policemen looked on from behind barbed wire. She had been there with her five children for the last three days.

Mursi was toppled on Wednesday in a takeover the military denied was a coup. The army said it stepped in to enforce the will of millions of Egyptians who rallied on June 30 demanding his resignation.

But while Mursi’s ouster was met with scenes of jubilation, it angered Islamists who held protests on Friday in which some 1,400 people were wounded in addition to those killed.

In Alexandria, where 14 people died on Friday, clashes broke out again, but there were no immediate reports of casualties.

The violence across the Arab world’s most populous state saw rival factions fighting, throwing rocks and clashing with soldiers amid sporadic gunfire in Cairo and others cities.

Egypt’s allies in the West, including main aid donors the United States and the European Union, and in Israel, with which Egypt has had a U.S.-backed peace treaty since 1979, have looked on with increasing alarm.

The chaos underlined the pressing need for a swift and inclusive political solution. Liberals and conservatives disputed on Sunday over the choice of interim prime minister.

The transitional authorities had been set to appoint liberal politician Mohamed ElBaradei, a favourite of young anti-Mursi protest leaders, before his candidacy was scuppered on Saturday when the hardline Islamist Nour Party objected.

On Sunday, the administration said the Oxford-educated lawyer, Social Democrat Ziad Bahaa el-Din, was its most likely choice, with ElBaradei as deputy president. But again Nour said no, raising fears of a prolonged deadlock.

“Both are from the same party, the National Salvation Front. This is rejected,” Nour Party’s leader Younes Makhyoun told Reuters.

Nour, the Brotherhood’s rival for the Islamist vote, had agreed to the army-backed transition plan leading to new elections. Its withdrawal from the process would strip that plan of Islamist legitimacy.

As darkness fell in Cairo, anti-Mursi demonstrators packed Tahrir Square, the cradle of the movement to unseat him, which holds some 350,000, and spilled out into adjoining streets.

A troupe of folk musicians played darabukka drums and mizmar flutes in a celebratory atmosphere.

There were loud cheers when military jets left trails in the sky that formed the shape of a heart above the square. The military has staged frequent flyovers in the last three days to underscore their authority.

Mohamed Manndouh, a 21-year-old business studies student, reflected the mood among many who backed military intervention. “I came out to protest today because we reject the terror of the Brotherhood,” he said near Tahrir Square.

Tens of thousands of men, women and children gathered at a Brotherhood sit-in near the mosque, where some have braved the heat since Wednesday.

For many Islamists, the overthrow of Egypt’s first freely elected president was a bitter reversal that raised fears of a return to the suppression they endured for decades under autocratic rulers like Hosni Mubarak, himself toppled in the 2011 Arab Spring uprisings.

The Brotherhood has said it wants nothing to do with the military’s plans for a new interim government. It wants Mursi reinstated and has pledged to keep protesting until he is.

The military has shown no sign of moving to dislodge the Islamists and may be hoping that sweltering summer heat and the onset of the Ramadan Muslim fasting month from Tuesday will gradually wear them down.

State media reported that the public prosecutor had ordered four top Brotherhood leaders arrested this week to be detained for a further 15 days on accusations of inciting violence against protesters.

Authorities have sealed the burned-out national headquarters of the Brotherhood, and the offices of its political arm, the Freedom and Justice Party, as part of the investigation.

Washington has not condemned the military takeover or called it a coup, prompting suspicion within the Brotherhood that it tacitly supports the overthrow.

Obama has ordered a review to determine whether annual U.S. assistance of $1.5 billion, most of which goes to the Egyptian military, should be cut off as required by law if a country’s military ousts a democratically elected leader.

But U.S. lawmakers said that was unlikely to happen.

“We should continue to support the military, the one stabilizing force in Egypt that I think can temper down the political feuding,” U.S. Representative Mike Rogers said on CNN’s “State of the Union”.

Egypt can ill afford to lose foreign aid. The country appears headed for a looming funding crunch unless it can quickly access money from overseas. The local currency has lost 11 percent of its value since late last year.

Only about half are in the form of cash or in securities that can easily be spent, and the IMF considers three months to be the minimum safe cushion for reserves. DM

Photo: Fireworks explode over protesters who are against deposed Egyptian President Mohamed Mursi holding Egypt flags and shouting slogans at Tahrir square in Cairo July 7, 2013. Hundreds of thousands of supporters and opponents of ousted Egyptian President Mohamed Mursi gathered in Cairo and Alexandria on Sunday, two days after similar gatherings led to nationwide clashes that claimed more than 30 lives. The huge crowds, likely to stay out on the streets until the early hours, raised the risk of further violence while a military-driven plan to resolve the political crisis remained mired in mistrust and confusion, dashing hopes of a quick fix. REUTERS/Amr Abdallah Dalsh