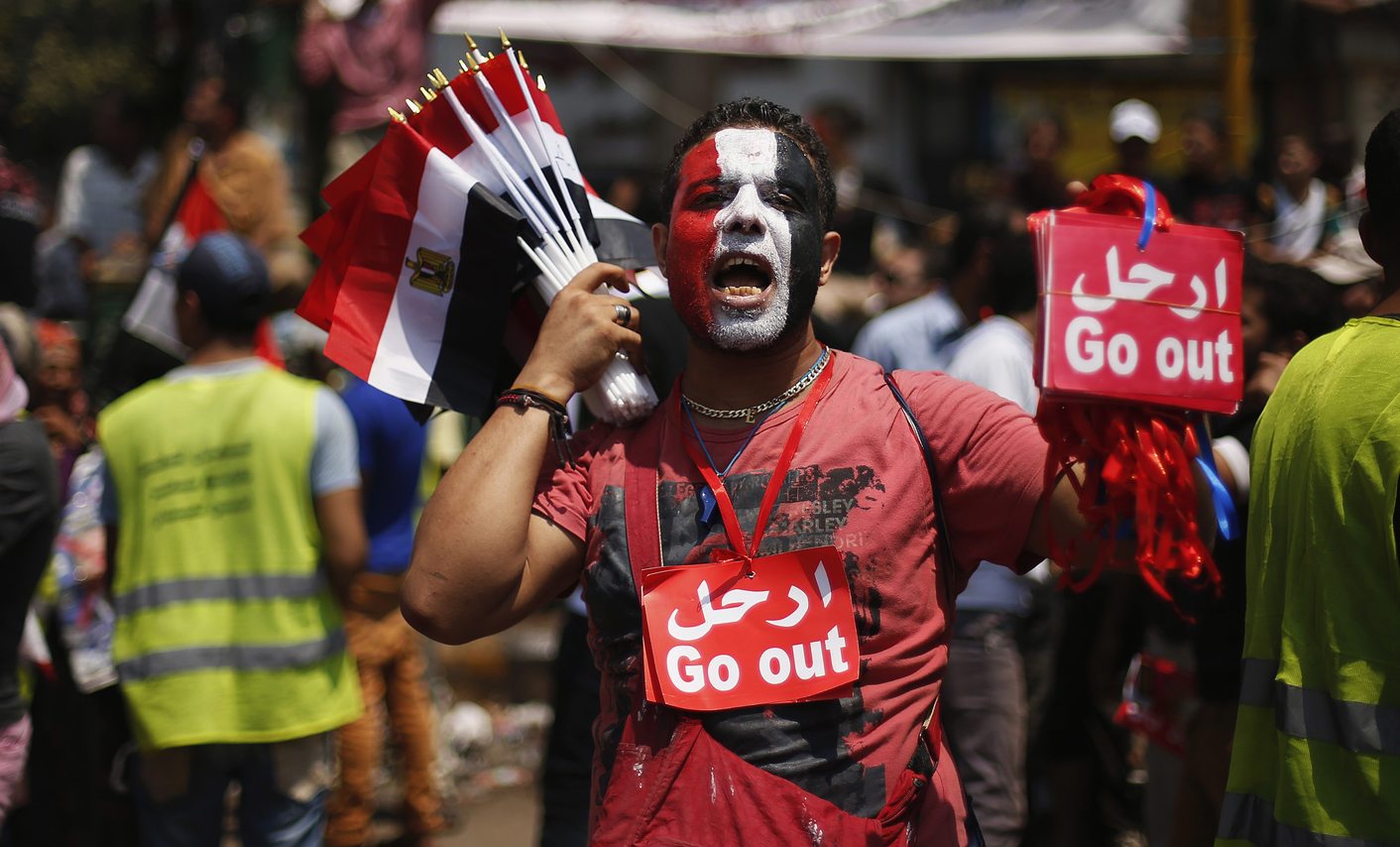 As angry as they are, the millions of Egyptian protestors can’t agree on much except that they want change, and quickly. But change got them into this mess in the first place, and change for change’s sake isn’t going to fix any of the country’s existential problems. By SIMON ALLISON.

In Egypt, the people have spoken. Millions of them turned out all over the country in demonstrations that, in their breadth and sheer numbers, made the 2011 Egyptian Revolution look like a service delivery protest that just got a bit out of hand. If ever you wanted to see what “the masses” actually looked like, this was your chance. Over-excited commentators used words like “gigantic” and phrases like “biggest protest in history” to describe the show of incredibly popular discontent on Sunday evening – which, it should be noted, is not even a weekend in Egypt.

And, unusually for post-revolutionary Egyptians, where bitter divisions have effectively stalled any kind of progress, everyone gathered could agree on one thing: they wanted President Mohamed Morsi out. That one man should be held entirely responsible for Egypt’s current malaise seems unfair, but he’s become a symbol of two years of frustrated hopes, unfulfilled dreams and a lingering if rarely expressed unease over whether the Egyptian Revolution was actually such a good idea.

The post-Mubarak era has not been kind to Egypt. Even leaving aside all the political infighting; the hollowing out of already hollow state bureaucracies; the continuing police brutality and excessive use of state force; the flawed constitution rammed through by Morsi and his Muslim Brothers; the supine judiciary which is compromised at all levels by judges loyal either to the ancient regime or the new one, but rarely to the idea of justice; the increasing, occasionally violent tensions between Muslims and Christians; the increasing, often violent tensions between Islamists and secularists; and the complete failure to reform the military which functions entirely independently of government, and often to its detriment – even leaving aside all of this, Egypt is in major, existential trouble, and no one’s coming up with any solutions.

As Mubarak’s one time friend Bill Clinton would say: “It’s the economy, stupid.”

Here are the statistics: GDP growth has slowed to just 2.2%. Unemployment is up to 13%. The country’s credit rating is in tatters, cut 16 times in the last two years by the three major ratings agencies. Tourism has dried up. More than half the country is officially impoverished (living under $2 per day), up from 40% under Mubarak.

Even this dismal economic performance is unsustainable, fuelled only by the foreign exchange reserves that Mubarak left behind and by emergency loans from the international community.

These, however, aren’t a long-term or even medium-term solutions (and they’re not great short-term solutions either). The foreign reserves are vanishing at an astonishing pace, from $34 billion before the revolution to $14 billion now. At this rate, tanother year and a half and there will be nothing left. And those loans are adding up: Egypt’s annual debt repayments have gone from $5 billion per year to $8 billion.

Egypt is nearly bankrupt, and it’s beginning to show.

Inflation is up, which means that everything is more expensive, and the chaos and bureaucratic malaise of the last two years means that there is less of things to go round. There are long queues for petrol, and even longer queues for bread.

Bread is a touchy issue for Egyptians. One of the main ways that Mubarak’s regime stayed in power for so long was through subsidising bread. It was an adaptation of the Roman ‘bread and circuses’ technique of political distraction, a kind of modern-day social contract in which the government told citizens ‘look, you’ll be a bit poor and your prospects aren’t great, and don’t expect much in the way of rights and political choice, but we will guarantee that you can always feed yourself and your family. You won’t go hungry.’ And, by and large, Egypt didn’t go hungry, and Egyptians didn’t kick up too much of a fuss about anything for many decades.

Until, that is, Mubarak’s government failed to keep its end of the bargain, undone by its own economic failings and sharp increases in the global price of wheat. “Bread, freedom and social justice,” chanted the revolutionaries in 2011. They’d gone without freedom and social justice for years, but the bread scarcity was something new – and, ultimately, it toppled a government. It might topple another one.

Once again, the army is getting involved, issuing President Morsi with an ultimatum to make compromises and forge a more inclusive government within 48 hours, or else. This ultimatum expires at 7pm Egyptian time on Wednesday, after which it’s going to get very messy indeed. Morsi has said that he has no intention of being dictated to by the military, and that their ultimatum amounts to a coup. The military, meanwhile, is planning to push Morsi aside and form yet another transitional government that will re-draft the constitution and plan new presidential elections.

There won’t, however, be any actual governing, or stability, or forward-planning, or any of the things that Egypt needs if it is to get its economy back on track. And that means that whatever the outcome of the current political crisis, another one is not too far away. DM