A need for Nelson: Prayers for the father of the nation 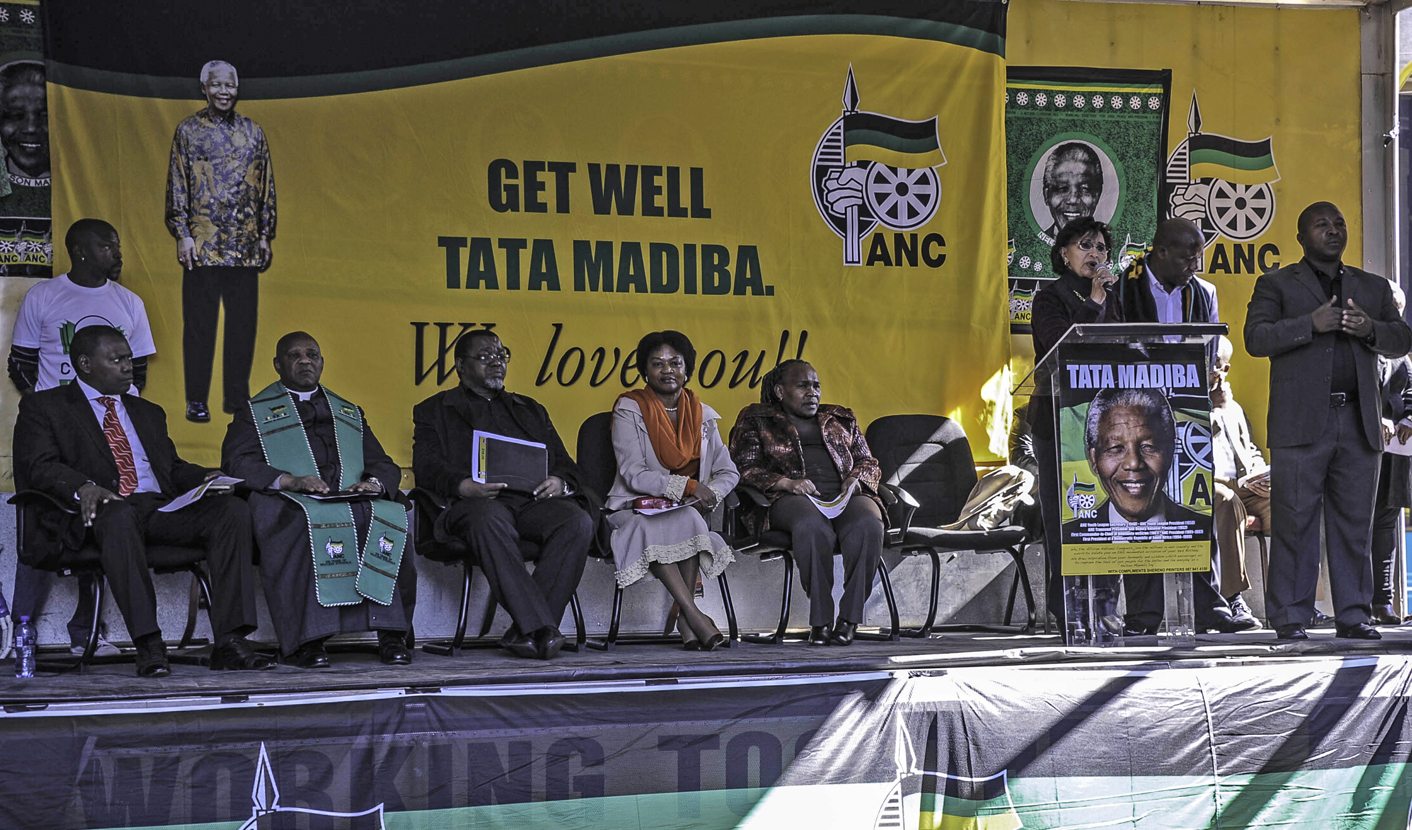 On Tuesday morning, in the shade of Chief Albert Luthuli House, on the corner of Sauer and President Streets in downtown Johannesburg, the African National Congress gathered to pray for Nelson Mandela. It has been almost a month since South Africa’s liberation icon was admitted to hospital. It has also been almost a month since journalists from around the world came to watch and wait for news of their hero, and almost a month that the world has feverishly been wishing for his recovery. By JESSICA EATON.

On Tuesday, outside the ruling party’s Johannesburg headquarters, the ANC firmly claimed Mandela as their own. At the morning ceremony, larger than life party banners with Mandela’s famous face and the words “Icon of the Struggle” were erected and exhibited for the first time on the exterior of the historic brick building.

ANC General Secretary Gwede Mantashe, Treasurer General Zweli Mkhize National Chairperson Baleka Mbete, National Spokesperson Jackson Mthembu, National convener of the ANCYL task team Mzwandile Masina, and former anti-Apartheid activist Sophie Williams de Bruyn, gathered in front of a large banner reading, “Get well, Tata Madiba, we love you!” to pray for the father of the nation and ANC icon. The crowd who gathered out front kept warm singing and dancing for Madiba while the ANC leadership encouraged them to wish for the “speedy recovery of the ailing statesman” and look up and admire the imposing new green and yellow banners.

The street was not only busy with ANC members, well-wishers and admirers, but it was buzzing with dozens of local and international journalists broadcasting the prayers across the country and the world. Walking down Sauer Street, Spanish, German and American voices could be heard between the Zulu and Afrikaans conversations. Many had come from “Mandela watch” at the Pretoria hospital to cover the prayer service in Johannesburg, one of many happening around the country.

Mthembu introduced Mandela as “our statesman, our father, our icon, Umkhonto we Sizwe leader, former president of the ANC, former president of our nation, Tata, Nelson Mandela” and introduced the individuals who lined the stage next to him as “the officials of the glorious movement of our people” who had “gathered to bless his wonderful work, to bless this wonderful banner of Tata on this wonderful historic building, and to remember a man who has been a source of healing in this nation and the world.”

Mbete said, “Mandela is our leader and he symbolises what the ANC stands for. These prayer services are our way to show our love for our icon. We love him because he is our father and we want him to remain forever. He showed us we can be humble even when you are great, even when you are excellent.”

Williams de Bruyn joined her comrades in saying, “We have seen him walk the long road to freedom and we ask the Almighty Father to bless him.”

Lucky Mzimela, ANC supporter and Mandela admirer from Durban, said he was just walking by when he saw the gathering. “I was so happy to see people gathering for my father. He is my father because he gave me my freedom. I think he will come out of hospital. He is an icon and I will never forget about him.”

Harry Komane, sitting on the sidewalk nearby, said he had come all the way from Krugersdorp for this service because “Mandela means a lot to me, we all love him. He is going to be well and he will come home soon. Even my children are always talking about Mandela and we are always praying together. My older one asks me when Mandela is going home because he is sad to see him sick in the hospital.”

Siza Mkhwanazi added that “The service was a good thing because he is an icon for the world. I’m touched there were even children praying and wishing Mandela a speedy recovery. He is a peacemaker and he played a very important role in demolishing Apartheid, which separated us. There is no one in the world like him. No one can play that role that Mandela can play, but maybe someday in the future.”

As the priest called Mandela “a source of healing for this nation and this world, a healer of illness, a healer of the economy, a healer of our emotions,” the longing for Mandela the “father” and Mandela the “healer” was obvious. The message was: We need him to be healed not only because we want him here but because we need him here. The ANC needs him as a symbol of the struggle, South Africans need him as a symbol of hope, and the world needs him as the ultimate symbol that good can triumph over evil and a non-racial nation could be a reality.

Twenty years after the freedom Mandela fought for was won, there still seems to be a sense that South Africa is sick, that it needs a healer. Even though South Africans now have their political freedom, economic freedom is still out of reach for many. And his party still needs Mandela to give us the hope that they can deliver that freedom. DM

All photographs by Thapelo Lekgowa.