The succession in Qatar, a sober view 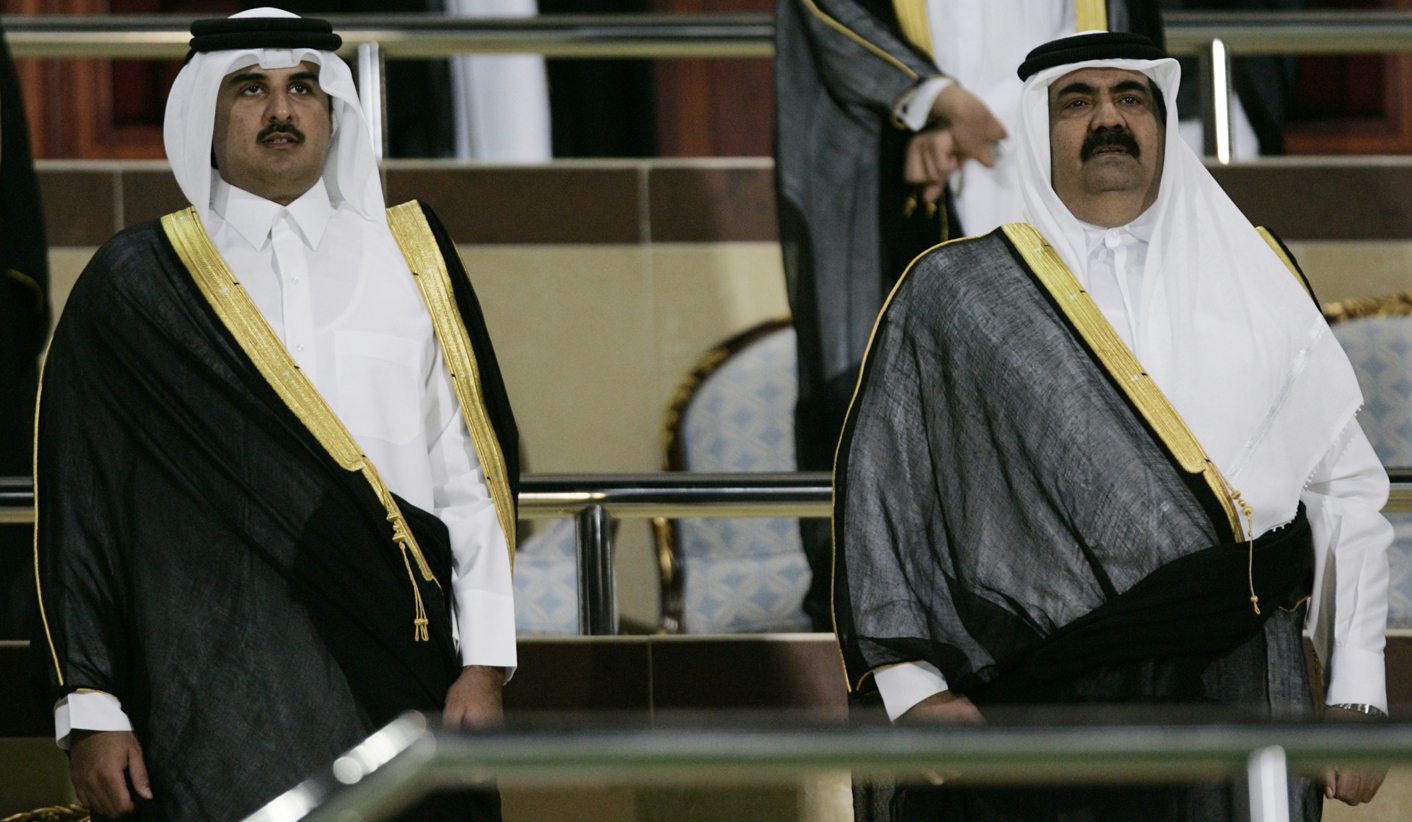 Western media and leaders hailed the transition of power in Qatar last week, as the aging Emir handed over to his son. PEPE ESCOBAR wasn’t so convinced (Asia Times).

Western corporate media is head over heels with the Emir of Qatar, Hamad bin Khalifa al-Thani, 61, as he magnanimously chose to depose himself to the benefit of his son, the former heir apparent Tamim bin Hamad al-Thani, 33.

In a positively Kennedy-esque speech on national television, the outgoing emir said, “The time has come to turn a new leaf”, so “a new generation steps forward to shoulder the responsibility”.

Needless to say, it does not occur to these Western equivalents of the white-robed tribal elders who gathered to pledge allegiance and kiss the hand of the new boss that hailing a Persian Gulf-style “passing the torch” from one unelected emir to another would be the same as hailing the torch passing from Hafez Assad to his son, Bashar al-Assad.

By the way, that motley crew of Doha-enhanced opportunists known as the Syrian National Council duly joined the cheerleading, dubbing the passing of the torch as “pioneering and unprecedented”. And keep buying and sending us hardcore weapons, please, alongside those other representatives of the Friends of the Destruction of Syria.

In the current Mad Max globalisation phase of post-capitalism, PR is everything, and the House of Thani excels in PR, duly delivered in English. Under the (Persian) rug is the fact that Qatar is a far from “moderate” Wahhabi petro-monarchy run as a gleaming feudal colony, with only 200,000 Qataris in an overall population of 1.9 million.

Forget about manual workers from Somalia to Pakistan and Nepal to Bangladesh getting Qatari citizenship, not to mention them being unable to leave without an “exit permit” from their employer. Forget about them having social security benefits. By the way, a debt of gratitude; all of the above are my real-life informants every time I visit Doha. And I didn’t even mention Amnesty International’s detailing of flogging as a state policy – especially against foreigners – to punish alcohol consumption and “illicit sexual relations”.

What sticks is that the new emir – a public schoolboy with impeccable English and already two “accomplished” wives – is being branded a “pragmatist”. And of course he’s “one of us”, because he was educated at Britain’s Sandhurst military academy (in one of those fake programs they run for wealthy Arabs).

The “pragmatist” will be judged by the one real and many lesser “Western powers” as he does the West’s bidding. Opening the way for the North Atlantic Treaty Organization to bomb Libya into failed state status: good. Weaponising the Syrian rebels: very good. Loads of money and support for the Muslim Brotherhood everywhere: dangerous. Support for Hamas in Gaza: out of the question. An office for the Afghan Taliban in Doha: tricky, especially if the Taliban use it to expand their network of Gulf donors.

Bailing out some of the West’s biggest banks: excellent. Selling us maritime caravans of tankers full of liquefied natural gas: splendid. Hosting Centcom at al-Udeid airbase: a strategic imperative. Being in the frontline against “Iran’s nuclear threat”: a must. Hosting the 2022 World Cup under scorching heat: stuff all those arenas with air-con.

In a nutshell: the British and the French, particularly, will continue to be all over the new emir because, after all, Qatar is unquestionably loaded.

And then there’s Mom – the larger than life Sheikha Moza, duly hailed by the West as a “champion of women’s rights”, not least her right to shop till she drops, as head not only of the Qatar Foundation – committed to the “emancipation and education of Arab women” – but also the investment fund Qatar Luxury Group. Talk about the power behind the throne.

Sheikh Tamim, heir apparent for almost a decade, is a fascinating contradiction. He is seen in Doha as the main driver towards positioning Qatar as a global hub. At the same time he has engineered Qatar’s official foreign policy strategy – which is to align, everywhere, with all things Muslim Brotherhood. No wonder he is simply detested by the House of Saud. Observers should buy ringside tickets to watch the ensuing cat-fight between the new emir and a House of Saud led by the geriatric 88-year-old King Abdullah.

Another subplot to be savoured is the future of outgoing prime minister and foreign minister, the Anglophile Sheikh Hamad bin Jassim, also known as HBJ. Now that’s a real high roller.

Everyone in Doha knows that HBJ will move to London, as a resident of the Thousand and One Nights (Vegas-style) penthouse at One Hyde Park, the most expensive residential building on the planet. HBJ will be closely managing the multi-billionaire sovereign wealth fund, the Qatar Investment Authority (QIA). After all, he never left; he’s always been the CEO of QIA, which was, until this week, presided over by Tamim. QIA does not disclose financial information. And the “diversified” investment criteria – encompassing Europe, Asia and emerging markets – is not transparent.

Who cares? And who cares that this is an absolute al-Thani family fiefdom since the mid-19th century? Everybody wants to go to Qatar. The population has doubled in six years – now at 1.9 million and growing. Life expectancy is 78 years – on a par with the US. It boasts the highest GDP per capita in the world, at over US$102,000 (2012 figure, and growing); good for you as long as you’re not a South or Southeast Asia worker slaving away. There’s no income tax. It’s Arab Spring-free, in fact Turkey and Brazil-style protest-free. Democracy? No; the end of history 2.0. If only the whole planet were an immense Qatar. DM