Barack Obama and the shadow of Madiba’s magic 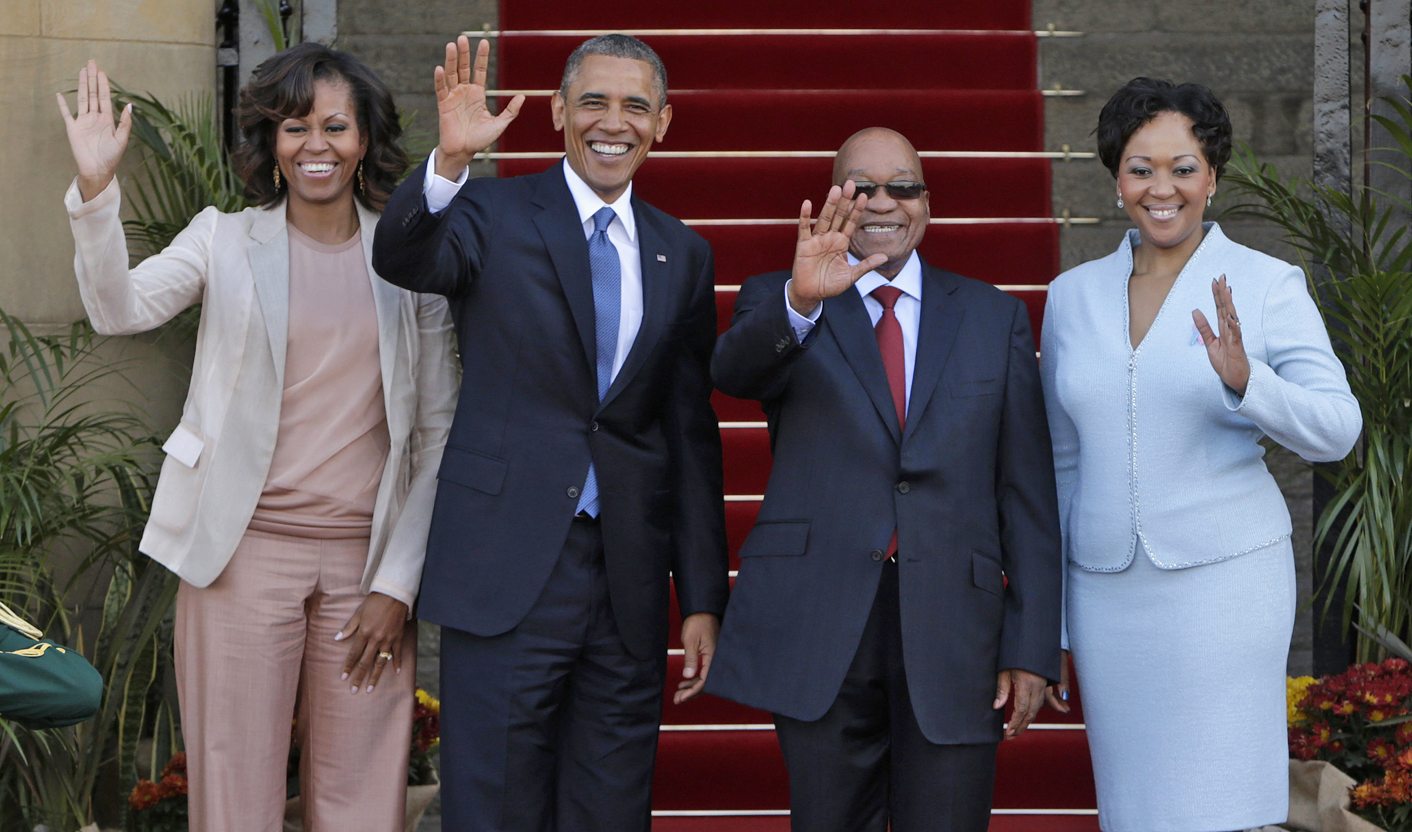 Under almost any other circumstances, the arrival of Barack Obama would thoroughly dominate the local news cycle. But it is an irony that the critical condition of the man who first encouraged the young Obama to consider a career in politics has relegated his visit to a distant second place. By J BROOKS SPECTOR.

Obama finished his time in Senegal, a moment that was supposed to celebrate the increasingly vigorous democratic space in that country and focus attention on the important theme of food security initiatives, only to find that a contentious American domestic issue had elbowed its way right into the planned story line. During his press event with Senegalese president Macky Sall, the two US Supreme Court overturned the Defense of Marriage Act – the law the prevented same sex unions from enjoying the same federal benefits as heterosexual married couples – and this took front and centre instead.

In response, Obama found himself pressing Sall for better treatment for gay and lesbian Africans, only to hear that conservative African societies are not prepared to take such steps.

As the New York Times reported the event: “‘It’s my personal belief, but I’m speaking now as a president not as a lawyer, that if you marry someone in Massachusetts and you move somewhere else, you’re still married,’ Mr Obama told reporters at a news conference here during his second trip to sub-Saharan Africa since taking office. ‘We’re going to be evaluating all these issues.’ Standing next to President Macky Sall of Senegal, Mr Obama also urged African nations that treat homosexuality as a crime, like Senegal, to make sure that gays and lesbians were not discriminated against by the government. ‘When it comes to how the state treats people, how the law treats people, I believe that everybody has to be treated equally,’ Mr Obama said. The comment prompted a retort from Mr Sall that his country is not ‘homophobic’ even though its society is not yet ready to decriminalize homosexual behaviour.”

The major photo opportunity of the West African stopover was the family visit to Gorée Island. Obama was photographed standing pensively in the “Door of No Return” looking out towards the Atlantic Ocean. That doorway in the infamous slave depot was the last view of Africa that slaves loaded onto a ship would have had before being thrust into the Middle Passage, that anodyne term that described the horrors encountered by many millions of slaves bound to the New World from Africa between the sixteenth and nineteenth centuries. Such a visit clearly must have been a poignant moment for the presidential couple – given Obama’s own African heritage (although via a father on an educational exchange program rather than via slavery) and his wife’s African-American heritage, with its inevitable connections through history to slave ancestors.

By the time Air Force One, the US presidential aircraft, had taken off from Senegal, and was in the air, bound for Waterkloof Air Force Base in Pretoria, speculation continued to grow about whether Obama’s South African visit would include a stop at the Mediclinic Heart Hospital where Nelson Mandela continued to receive treatment. The AFP reporter traveling on the presidential jet sent an alert en route, saying, “President Obama said Friday a much-awaited meeting with his critically ill hero Nelson Mandela would depend on the icon’s family. ‘We’ll see what the situation is when we land. I do not need a photo op,’ Obama said…‘The last thing I want to do is to be in any way obtrusive.’”

It is clear Nelson Mandela’s legacy has loomed large in Barack Obama’s thinking for many years. As the president wrote in his foreword to Mandela’s book Conversations with Myself: “Like many people around the world, I came to know of Nelson Mandela from a distance, when he was imprisoned on Robben Island. To so many of us, he was more than just a man – he was a symbol of the struggle for justice, equality, and dignity in South Africa and around the globe. His sacrifice was so great that it called upon people everywhere to do what they could on behalf of human progress. In the most modest of ways, I was one of those people who tried to answer his call. The first time that I became politically active was during my college years, when I joined a campaign on behalf of divestment, and the effort to end apartheid in South Africa….his example helped awaken me to the wider world, and the obligation that we all have to stand up for what is right. Through his choices, Mandela made it clear that we did not have to accept the world as it is – that we could do our part to seek the world as it should be.”

Although Barack Obama’s South Africa visit will almost certainly not include a meeting with his political model, he will still be busy with South African president Jacob Zuma and a regional security and development-themed conversation with AU Commission head Nkosazana Dlamini-Zuma. There will also be a youth forum at the University of Johannesburg designed to highlight the South Africa segment’s main theme of the continent’s successor generation’s challenges and the entire African trip’s keynote speech at the University of Cape Town. There will also be a visit to Robben Island (watch for that photo op in front of Nelson Mandela’s prison cell door) and some time at a community health program named after Archbishop emeritus Desmond Tutu that has been partially funded by the US Government. Although it won’t be quite the same, perhaps even keep an eye out for a yet-unannounced event that channels the Mandela legacy somehow – perhaps a meeting with family members?

Then it will be off to Tanzania for the final leg of the trip. Here the key focus is supposed to be economic cooperation and trade promotion – tapping into the continent’s growing demands for inputs to ambitious infrastructure development programs, as well as the realization by the continent’s leaders that the US Government’s African Growth and Opportunity Act-based tariff-free access to American markets needs to be defended and promoted before it expires in less than two years. There is also that little matter of growing Chinese trade penetration into Africa in search of secure supplies of key commodities for its own economic growth – and how American businesses (and the country’s government) plan to counter that with their own improved trade promotion efforts.

While Barack Obama clearly has a sentimental attachment to Africa – as well as a biological one – some critics on the continent, as well as others back home, have been arguing Obama’s virtual absence from this region for the first five years of his presidency has put the US on the back foot in getting – and staying – in touch with Africa’s economic growth trajectory. Moreover, unlike his two predecessor presidents, as of yet there is no real sense of Obama’s policy legacy for US-Africa relations beyond his interest in broadening engagement with the continent’s future leaders – and there is less and less time to create one before Obama must depart from the White House in 2016. DM

Obama yet to have African legacy like predecessors at the AP;

Obama Looks to History and Future in Senegal at the New York Times;