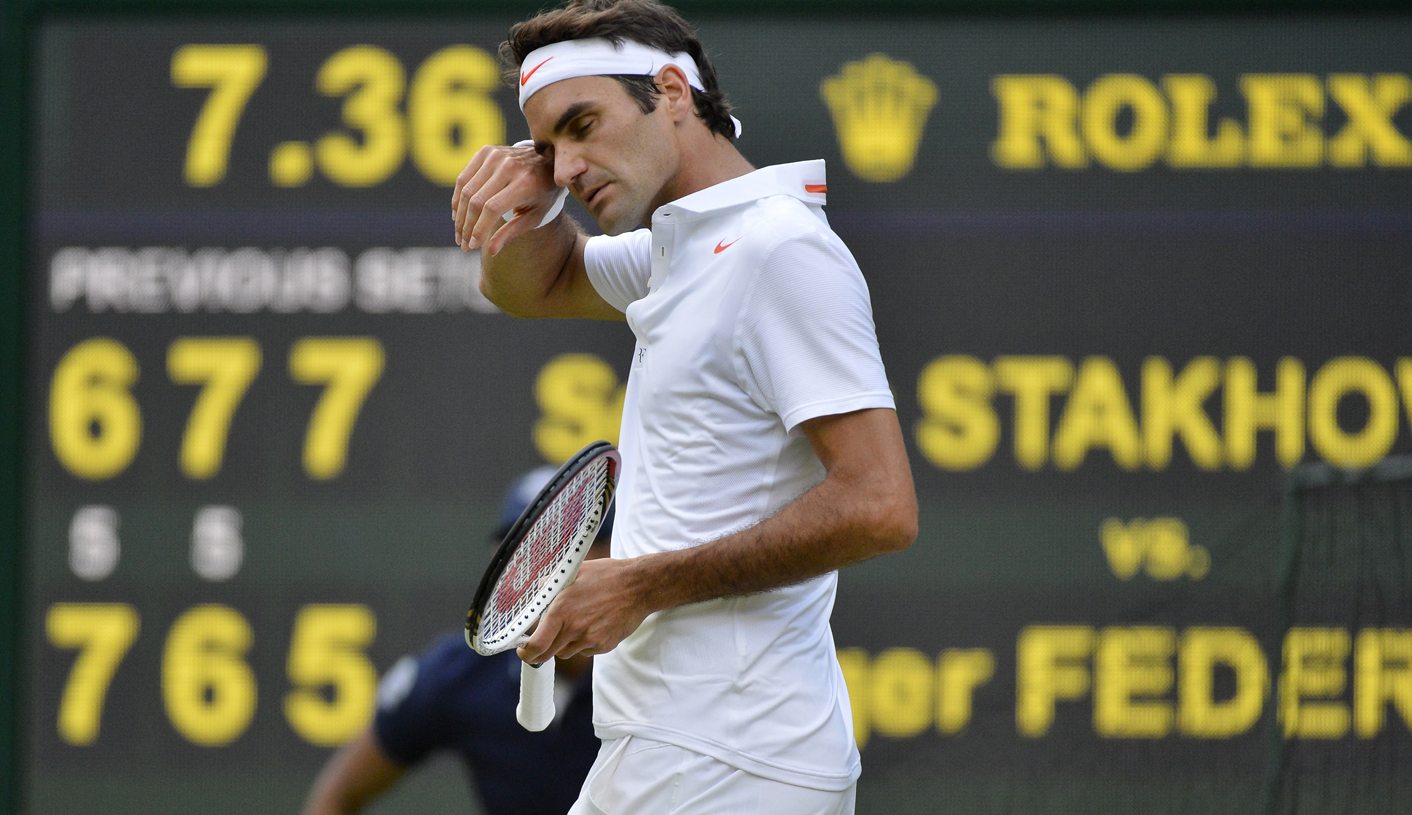 Roger Federer and "his ego" took an unbelievable battering at the hands of a little-known Ukrainian as the Swiss champion and holder of a record 17 grand slam titles was sent spinning out of Wimbledon on a day dubbed as 'Whacky Wednesday'. By Pritha Sarkar.

A record that took 36 grand slams and nine years to create was turned on its head by 116th-ranked Sergiy Stakhovsky who rocked the All England Club to its core as he inflicted a brutal 6-7(5) 7-6(5) 7-5 7-6(5) second-round defeat on a man he called a “Wimbledon legend”.

That ‘legend’ had enjoyed a remarkable run of reaching 36 consecutive grand slam quarter-finals or better dating back to 2004, won seven titles at the spiritual home of lawn tennis and had not lost to a rival ranked outside the top 100 for over eight years.

It took a serve-and-volley loving man who had never beaten a top 15 player in his 27-year-old life to shatter the glass ceiling.

“I’m still in disbelief that actually happened,” a sweat-drenched Stakhovsky said moments after rolling on the most famous tennis stage in triumph.

Federer’s ego certainly took a hammering on a beautiful summer’s day that started off routinely for the Swiss great as he nonchalantly ambled into the All England Club holding the hands of his twin daughters Myla Rose and Charlene Riva.

But by the time he walked on to Centre Court at 5.08 pm local time, day three of the grasscourt major had already taken a surreal turn after seven players withdrew injured and women’s third seed Maria Sharapova stumbled to defeat.

But three hours later, those tales of woe had been reduced to a footnote as Federer slapped a backhand wide on match point down to send shockwaves around the globe.

“All time craziest days at Wimbledon – ever!” exclaimed a disbelieving John McEnroe.

Federer has suffered some painful defeats in his life, including the thrilling five-set final in 2008 against great rival Rafa Nadal, but he could not mask his pain on Wednesday.

“It’s always a disappointment losing any match around the world, and particularly here. It was a tough loss today. Some haven’t hurt this much, that’s for sure,” Federer told reporters after discarding his on court all-whites for a striped t-shirt and sky-blue jeans.

“It’s a great number (36). I can be proud of it… but that’s (not) something (I am) going to mourn,” added the third seed, whose defeat left a gaping hole in the bottom half of the draw following Nadal’s departure in the first round.

No one could have predicted such an outcome when Federer had serenely glided through the first set by firing down nine aces, no double faults and 20 winners.

Stakhovsky played his part as entertaining challenger to perfection – hitting between-the-leg trick-shots, diving after volleys and trying to throw Federer off balance with attempted lobs. They all earned him wild applause, as did the two break points he carved up, but at the end the set was Federer’s, snapped up with a screaming 123 mph ace.

The Ukrainian journeyman snared another break point in Federer’s opening service game in the second set but the 31-year-old took care of that with a smash that bounced off court and right through the players’ entrance behind the green backstop.

Federer also saw two break points disappear into the ether in the 11th game before the duo headed into another tiebreak.

At 5-5 there was no hint of the drama that was about to unfold but a forehand error from the Swiss and a blazing passing shot winner from Stakhovsky set pulses racing on a hushed Centre Court.

Two more break points came and went for Federer at the start of the third and he paid a mighty price for the miss as Stakhovsky pounced in the 11th game to register the first break of the match two hours and eight minutes into the absorbing contest.

That left a group of five women kitted out in red RF hats, earrings, t-shirts, sweatbands and handbags all looking rather dazed and muted as their hero seemed to be heading towards the ultimate Wimbledon nightmare.

Federer’s hold on the gilded Challenge Cup started to slip at an even quicker pace as he fell 3-1 behind in the fourth set and if there was any doubts about what Wimbledon meant to him, a whistling backhand that almost decapitated a net-charging Stakhovsky left no doubts.

After two hours and 34 minutes of rivetting drama and seven previous failed attempts, Federer finally broke the Stakhovsky serve to draw level at 3-3.

But that only proved to be a momentary reprieve as Stakhovsky kept up the serve-and-volley onslaught and with the clock moving dead on to three hours, he put a full stop to what had been a remarkable run of results in world tennis.

While Federer was condemned to his earliest exit at Wimbledon since a first round loss in 2002, Stakhovsky was already excited about what the future holds for him.

“Right now I can definitely tell my grandkids, I kicked the butt of Roger Federer!” he grinned. DM

Photo: Roger Federer of Switzerland wipes his face during his men’s singles tennis match against Sergiy Stakhovsky of Ukraine at the Wimbledon Tennis Championships, in London June 26, 2013. REUTERS/Toby Melville

Eastern Cape bus disaster: ‘Grant day a painful reminder of those we lost’

At risk from coronavirus, Julian Assange is one of just two inmates in Belmarsh maximum-security prison held for skipping bail

Who can unions admit as members?

As the Covid-19 lockdown continues, please don’t forget about people living with disabilities