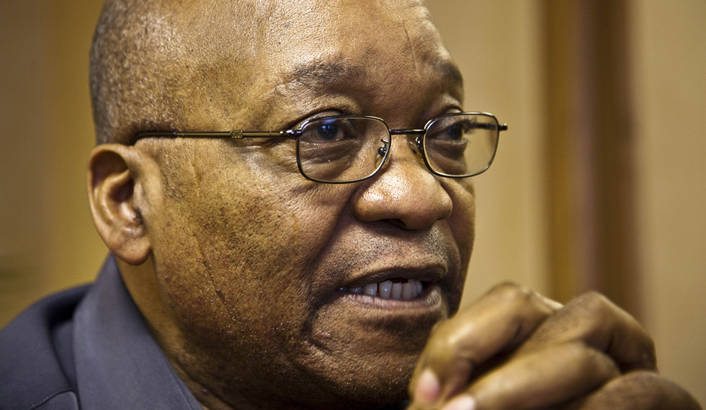 A senior chief in the AbuThembu nation, to which former President Nelson Mandela belongs, says if Madiba is no longer enjoying life, then the “Good Lord should take a decision to put him out of his suffering”. City Press reported that Nkosi Patekile Holomisa, who is also an ANC MP, told the newspaper it was “up to God to decide whether the elderly statesman would live or die”. Reports have claimed Mandela is on life support, but this has not been confirmed. Holomisa said Mandela’s family was “in pain” and hoping for a miracle “that he recovers and become his old self”. Holomisa said all should emulate Mandela’s leadership and legacy.

Former ANC Youth League president Julius Malema’s Economic Freedom Fighters political platform received a boost from research that says one in four young South Africans would vote for the EFF in next year’s elections. The research, by Pondering Panda, showed 26% of the 3,585 youths surveyed would vote for Malema. “It’s clear that a significant number of young people are dissatisfied with the ANC and would turn to Julius Malema as an alternative if he created a new political party,” said Pondering Panda’s Shirley Wakefield. But the EFF said it could win 60% of the youth vote. “EFF foresees victory in the immediate future, because… 26% approves of the Economic Freedom Fighters even before elections happen,” said spokesman Floyd Shivambu.

The upcoming visit by US President Barack Obama continues to create controversy as two South Africans tried to get arrest warrants for Obama. The Society for the Protection of our Constitution has brought charges against Obama “of war crimes and crimes against humanity”. Representative Mohamed Hussain Vawda said Obama was directly and indirectly responsible for killing and injuring more than 3,000 people, including women and 176 children, in countries which “have been no threat to the US”, such as Pakistan and Syria. The Muslim Lawyers’ Association made an urgent application for Obama’s arrest, but the Pretoria High Court dismissed it. Sapa reported NPA spokeswoman Bulelwa Makeke saying she was not aware of Vawda’s affidavit or case.

President Barack Obama’s visit to South Africa is important for the economy, says trade and industry minister Rob Davies. Addressing media before Obama’s visit, Davies said South Africa would use the opportunity to showcase why South Africa, and Africa, was a good investment prospect, particularly in terms of infrastructure, trade and development. “The reality is that Africa is turning around… We are looking at partnerships that will strengthen our economy,” said Davies. President Jacob Zuma will hold bilateral talks with Obama in Pretoria to discuss trade, health, education, development assistance, peace and security, among others. The White House said Obama would use his visits to reinforce the importance that the US places on growing ties with countries in sub-Saharan Africa and would “underscore the President’s commitment to broadening and deepening cooperation between the United States and the people of sub-Saharan Africa to advance regional and global peace and prosperity”.

MTHETHWA KNEW GADDAFI’S CHIEF OF STAFF WAS IN SA

The Democratic Alliance says police minister Nathi Mthethwa knew Muammar Gaddafi’s former chief of staff, Bashir Saleh, was in South Africa as early as February this year. Finance spokesman Tim Harris said this fact was revealed in a reply to a DA parliamentary question and “contradicts the statement made in Parliament by President Zuma last week when he said that South Africa was not able to monitor or prevent the movement of Mr Saleh”. Saleh is on Interpol’s ‘most wanted’ list. Harris says the “recent spotlight on Libyan funds and assets allegedly hidden in South Africa has now shed light on what may be a cover-up of possible financial ties between government, the ANC and the former Libyan dictator”. As such, the DA has submitted a PAIA application to the Financial Intelligence Centre to “get sight” of documents relating to Libyan financial interests in South Africa.

A total of 129 alleged rhino poachers have been arrested in South Africa since the beginning of the year, with 58 of those arrests taking place in the hard-hit Kruger National Park. In the latest operation, SANParks confirmed the arrest of three alleged poachers in the Lebombo Conservancy area of Mozambique following a joint operation involving rangers from South Africa and Mozambique. A .458 hunting rifle and poaching equipment were confiscated. The environmental affairs department said a total of 446 rhinos have been poached across the country since January. The Kruger National Park has lost 280 rhinos to poachers, while the number of rhinos poached in North West has increased to 50.

Hardline union the Association of Mineworkers and Construction Union (AMCU) has postponed talks with platinum producer Lonmin, averting an imminent strike, to allow more time for the government to reach a wider stability pact between labour and the mining industry. Lonmin and AMCU were to go to arbitration on Wednesday over their failure to reach a recognition agreement. “The company agreed to an AMCU request to delay the talks in order to allow the process of engagement, led by the deputy president … to take its course,” Lonmin said in a statement. AMCU said in a letter to Lonmin, dated Tuesday but obtained by Reuters on Wednesday, “The strike action which has been decided upon has been delayed at the request of the deputy president … We reserve the right to issue Lonmin with a notice of commencement of strike action.”

The ANC has called businessman Kenny Kunene a “questionable character intent on destroying the party”, The Star reports. Kunene recently wrote a scathing open letter to President Jacob Zuma in which he called him a “monster” and a “tyrant”. Kunene said people within the ANC kowtowed publically to Zuma, but loathed him behind his back. The outspoken letter spurred former ANCYL spokesman Floyd Shivambu to comment that ANC secretary general Gwede Mantashe had told him Zuma was a “liability” to the ANC. Kunene said Mantashe had “bitterly criticised” Zuma in private. ANC spokesman Jackson Mthembu lashed out at Kunene, saying he “wanted to sow division between Zuma and Mantashe” to weaken the ANC ahead of the general election next year. DM