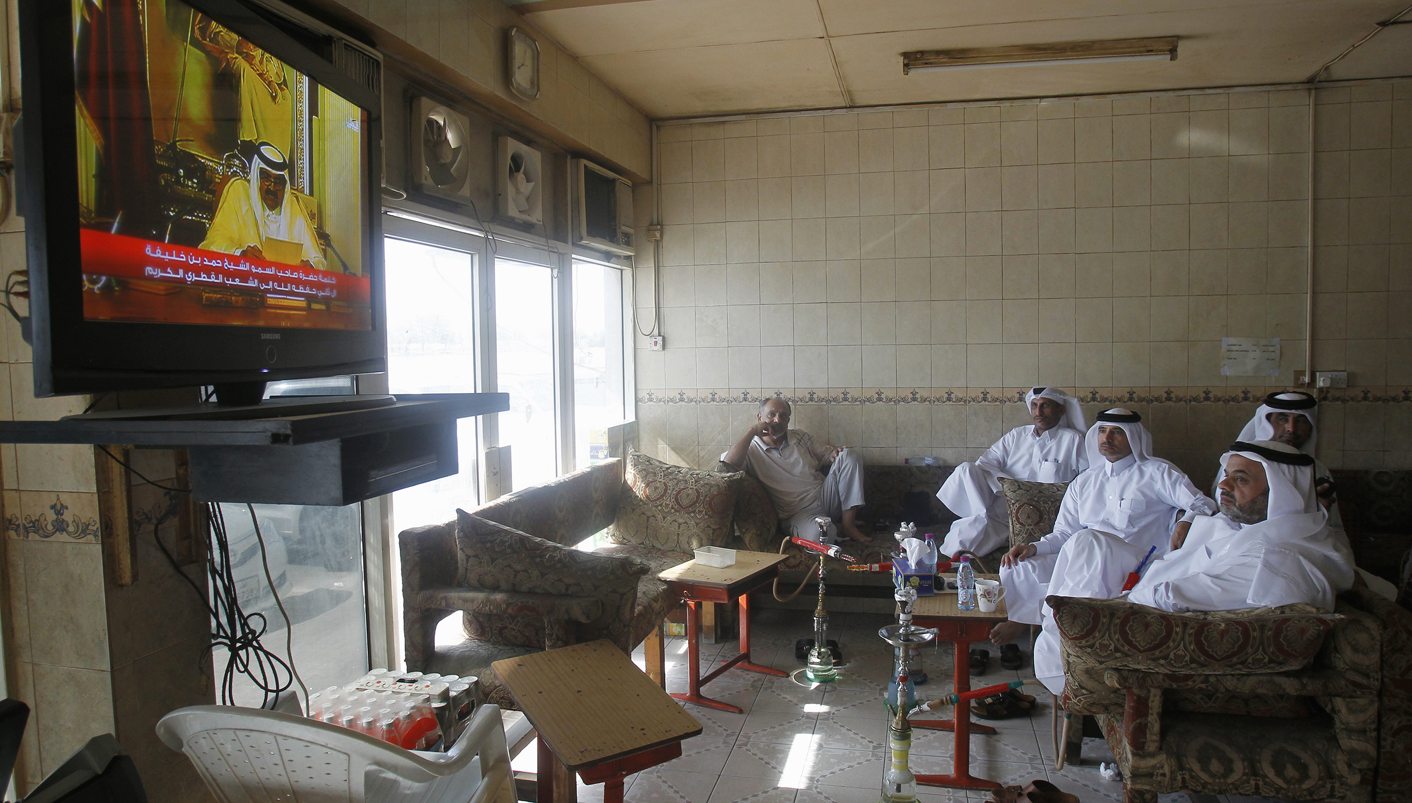 The U.S.-allied state is small, with 2 million people, but is the world’s largest exporter of liquefied natural gas, a global investment powerhouse and heavy hitter in Middle East diplomacy and international media.

Qatar has also been a high-profile supporter of Arab Spring uprisings but remains an absolutist monarchy itself, a system unchallenged by a population that enjoys great affluence.

Thousands of Qatari citizens thronged the emiri court in the capital Doha to pledge allegiance to the 33-year-old new head of state after the emir, 61, announced the handover.

“The time has come to turn a new page in the journey of our nation and have a new generation carry out responsibilities … with their innovative ideas,” Sheikh Hamad said in a seven-minute speech broadcast on state television.

“I address you today to inform you that I will transfer power to Sheikh Tamim bin Hamad al-Thani. I am fully confident that he is qualified for the responsibility and is trustworthy,” he added, seated beside Qatar’s red-and-white flag.

Sheikh Hamad made no mention of Sheikh Hamad bin Jassim, the veteran prime minister and foreign minister who is the public face of Qatar’s assertive foreign policy and had been expected to step down as well.

Gulf political analysts said they anticipated no significant changes to foreign or domestic policy after the handover, noting that Sheikh Tamim was already involved in running the peninsular state under his father’s direction.

A Qatari official said earlier that the transition of power, once announced, would take immediate force.

State television later showed Qataris lining up to shake hands and rub noses in the traditional Gulf Arab greeting style with the new emir and his father. Outside, a queue of black Mercedes cars snaked their way to the royal court.

On the eve of the power transfer, Sheikh Hamad issued a decree extending the term of the advisory shura council, in effect indefinitely postponing elections that had been tentatively scheduled for the second half of the year.

Diplomats had said earlier that Sheikh Hamad, who overthrew his father in a bloodless coup in 1995, had long planned to abdicate in favour of the Crown Prince.

Tuesday was a national holiday in the country of 2 million, ruled by the al-Thani family for more than 130 years.

British Foreign Secretary William Hague said in a statement that he looked forward to even stronger ties with Qatar, which gained independence from Britain in 1971.

Sheikh Hamad has elevated Qatar’s global profile through the development of the Al Jazeera television network, as well as its successful bid to host the 2022 soccer World Cup tournament.

Qatari state media said Sheikh Hamad had formally told family members and top decision makers of his decision at a meeting in Doha on Monday.

Arab and Western diplomats said they understood the motive was the emir’s desire to effect a smooth transition to a younger generation. Such a transition would be unusual for Gulf Arab states, where leaders usually die in office.

“As Tamim’s succession is very much the outcome of a longer process rather than the enforced product of any sudden upheaval, there will be less sensitivity attached to the change of leadership than might otherwise be the case,” said Gulf expert Kristian Ulrichsen at the Baker Institute for Public Policy.

“If anything, the decision to hand power to a younger generation confirms Qatar as the regional outlier, as a state that does things differently, meaning there is less direct comparison with other Gulf States,” he said.

Qatar has loomed large in promoting Arab Spring protests, lending significant support to rebels who toppled and killed Libyan leader Muammar Gaddafi in 2011 and to a continuing uprising against Syrian President Bashar al-Assad.

Qatar has also played host to a delegation of the Afghan Taliban, which opened an office in Doha last week in preparation for possible talks with the United States about how to end a 12-year-old conflict in Afghanistan.

Other crises and wars that Qatar has tackled include Yemen, Somalia, Lebanon, Darfur and the Palestinian territories. Doha has often arranged for peace talks on its own soil to show it can punch above its weight in international diplomacy.

But although he has strongly supported uprisings against veteran autocracies in other Arab states, Sheikh Hamad cracked down on dissent at home, restricting freedom of expression.

In February this year a Qatari poet was jailed for 15 years for criticising the emir and attempting to incite revolt.

But Arab Spring sentiment has scarcely figured in Qatar, which has one of the world’s highest per capita incomes and whose citizens have cradle-to-grave welfare.

Qataris said Sheikh Tamim had a big task upon his shoulders.

“He told us he would do his best to continue the development in the country. He looked happy,” Khalid Rashid Mohammed, a 34-year-old well-wisher, said after he shook hands with the new ruler. “It’s not easy work. It’s a heavy responsibility.” DM

'I told her I was 14': Ghislaine Maxwell's third accuser testifies at trial