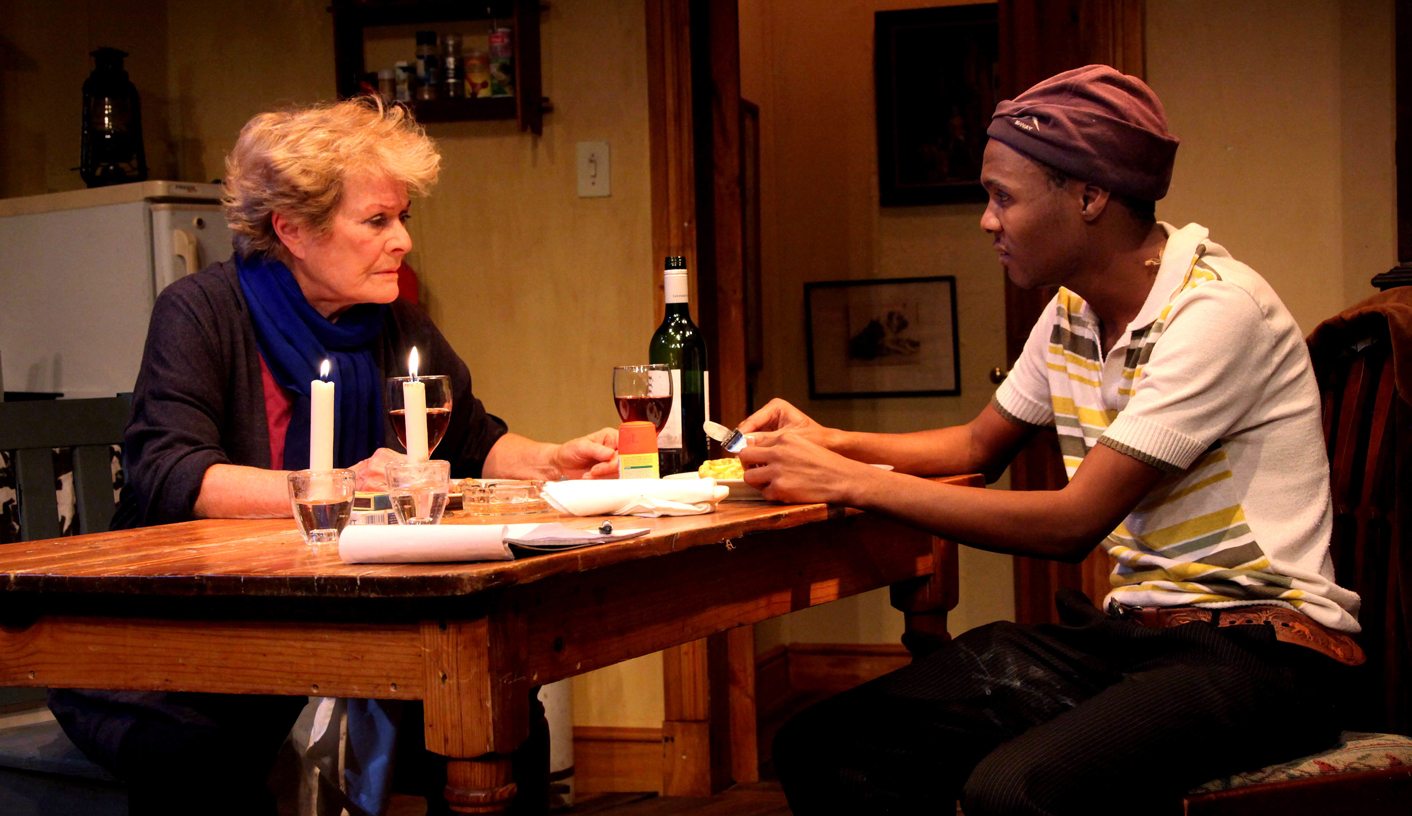 Lara Foot’s Solomon and Marion is the spellbinding story of two lonely souls who find companionship in an unlikely place. Never clichéd, always cracking, it’s a must-see piece of theatre. By LESLEY STONES.

The starting point for the play Solomon and Marion might sound like a great incentive to opt for a night at the movies instead.

A young white man has been murdered. His mother sits in lonely isolation, her body in the present, but her heart and happiness abandoned long ago in the past.

But don’t roll your eyes and ask if we’ll never stop rolling out these gloomy tales of hurt and misery, because Solomon and Marion is a wonderful piece of theatre, beautifully presented and powerfully acted by Dame Janet Suzman and Khayalethu Anthony.

Suzman fairly crackles as Marian, once a cheery wife and mother and now a divorcee with a dead son and an absent daughter. She is riveting in the role, immediately bringing us into her world as she writes her daughter a letter, then sits wrapped in a blanket and wrapped up in her loss.

The mood changes with the arrival of Solomon, the grandson of a former maid who claims he has been sent to watch over the old woman.

The script by Lara Foot naturally has Marion both suspicious and a little fearful, thawing slowly as Solomon shows his nature. He’s not charming, exactly, but friendly and open, and as wary of this old white matron as she is of him.

The stage set by Patrick Curtis is lovely, the kitchen of an isolated house that was once filled with family, while the lighting by Mannie Manim is also perfect. But it’s the script that makes this story so spellbinding.

Foot’s writing is magnificent. She captures what we’d all be thinking, black and white, young and old, as two characters from different worlds meet and find unlikely companionship.

Solomon was orphaned as a child and raised by his grandmother, who has also passed away. He’s as lonely as Marion, and their similarities are more important than their differences.

It’s beautiful to watch their journey towards friendship, with the banter between them barbed with challenges and peppered with wit as they each help the other’s wounds to heal.

Then the mood swings again as Solomon admits why he is really there, and the past is relived in a stunning scene of tension and anguish. Don’t leave it there, I think, all teary-eyed, as the truth pulls this delicate but precious relationship apart again.

The brutal incident at the core is never overplayed, but serves as the stepping stone for a courageous tale of finding renewed hope after the void of tragedy. It’s exquisite storytelling matched by the superb acting.

There are elements that are funny, moments of fear or great pain and unexpected kindnesses. In short, the action on stage is a microcosm of life in South Africa – and it’s far too good to miss. DM

* Solomon and Marion runs at the Auto & General Theatre on the Square until June 30. Review courtesy of www.lesleystones.co.za