India edge England in 20 overs clash to decide 50-over... 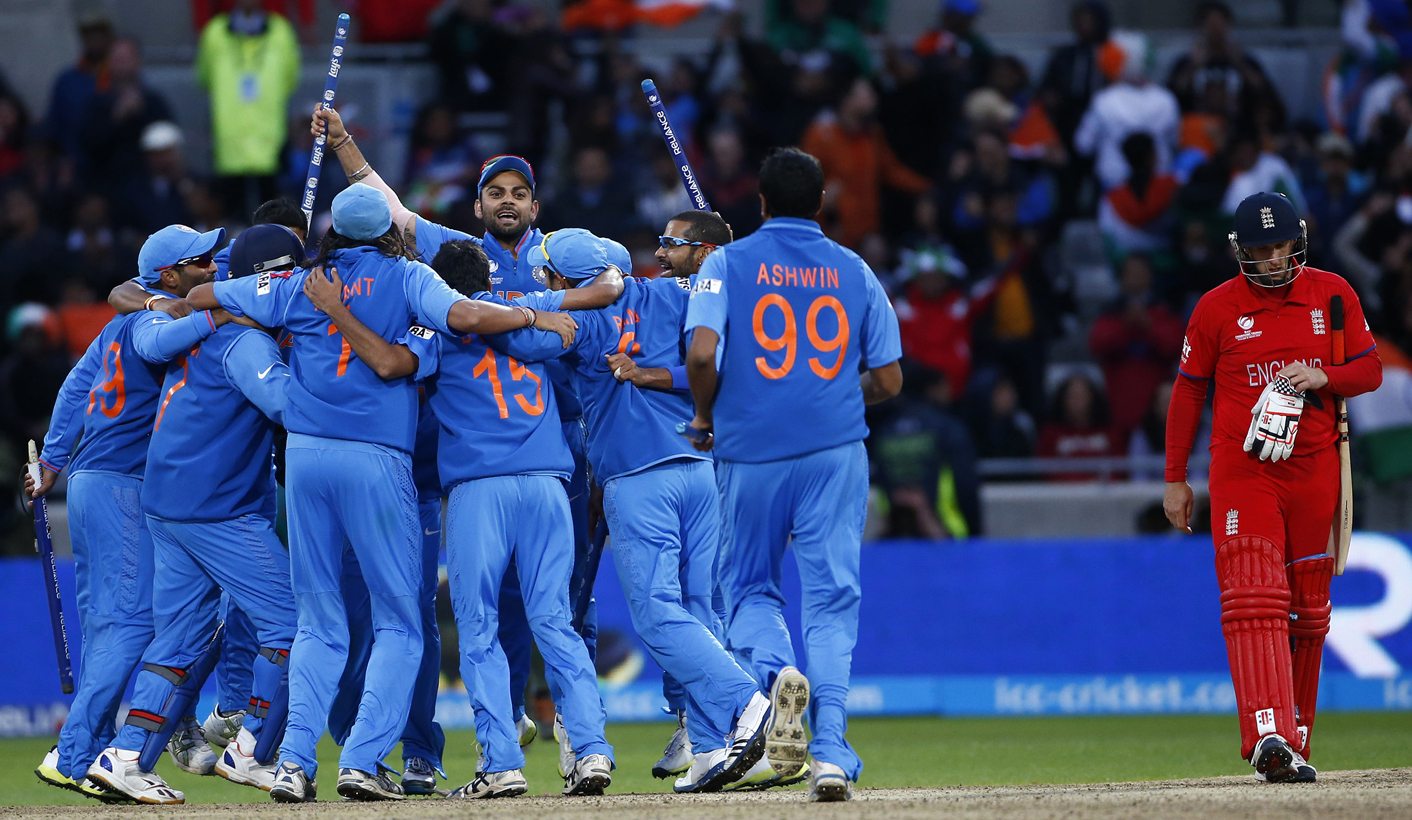 India were crowned Champions of the Champions Trophy by clinching a five-run win against England in Birmingham on Sunday. The 50-over match was reduced to just 20 overs thanks to heavy rain and although the end result had all you’d hope for in a game, it was hardly the final which players and fans deserved. ANTOINETTE MULLER reports from Birmingham.

It took just over two weeks, but English weather finally ruined cricket’s jamboree in the most crude way possible: a truncated final where a 50-over competition was decided by a 20-overs-a-side shootout. England and India had to settle for a shared trophy because the ICC thought it a good idea to not pencil in a reserve day for the tournament.

Entertaining as the match was, with ebbs and flows and enough nuances to fill column inches for a week, it wasn’t quite the final that should have been.

While the favourite still won and the hosts will remain condemned to their fate of being unable to clinch one-day silverware, the final of the competition wasn’t quite what many may have wanted to see. Not because many take such delight in seeing England fail, but simply because everyone deserved better.

In a day marred by rain, the tease of the are-we-on-or-are-we-off waiting game, the ICC for once, managed to show some common sense when they saw it fit to extend the hours of play when the rain came down just before the initial scheduled cut-off and it looked like everybody was doomed for the fate of a shared trophy. That was a scant consolation for the lack of reserve day, though. A match that should have been called off petered out into a 20-over hit and giggle, which didn’t quite do justice to either side’s efforts throughout the tournament.

England had won the toss and elected to bowl in what felt like decades ago, but it still proved to be the right decision. Rohit Sharma was the first wicket down, missing a straight delivery from Stuart Broad, which carted his stumps and he was followed back to the dressing room by Shikhar Dhawan soon after in a rare failure from the opening batsman.

India never looked settled and save for Virat Kohli’s hit-and-miss hit antics, any sort of coherent partnership was hard to come by. It wasn’t until the sixth wicket, when Kohli paired up with Ravi Jadeja for 47 runs, that some stability was worked into the Indian batting.

A bit of magic from Ravi Bopara, who managed a double wicket-maiden, did help the hosts somewhat, but India never really looked in the game. Whether that was because they, like so many others, had thought the game would be called off ages ago and let their guard down or simply because they couldn’t care for a 20-over shootout, nobody knows. India managed to post 129-7, a score that looked barely defendable.

England, though, has never looked as confused about its approach as India. Alastair Cook and Jonathan Trott both departed early while Joe Root couldn’t quite live up to his usual mature and calm self. Soon, England were 46-4. Ishant Sharma tried his utmost to help give England the edge with a flurry of poor bowling, but he soon took two-in-two, dismissing both set batsmen in Ravi Bopara and Eoin Morgan as England lost four for three and the story of the little engine that could not continued.

With 15 to defend off the final ball, Ravi Ashwin made a fine effort of it and helped India to a five-run win to add another piece of silverware to their expanding cupboard.

All in all though, it wasn’t quite the final that should have been. It might have been entertaining, but that’s no excuse for the lack of scheduling of a reserve day.

The official reasoning was that it simply wasn’t possible because the only window allowed for the Champions Trophy is now and England and New Zealand are due to play two T20s against each other straight after, while India head off to the West Indies for a tri-series.

But, curiously, those T20s were never included in the original FTP from the ICC, the one sent out nearly three years ago. The Future Tours Programme is, of course, usually used as a guideline only, but the official tour schedule for New Zealand’s visit was only released a year ago. Although it was before the Champions Trophy schedule was released, surely logic should have dictated that weather might play a part in a cricket competition held in England? Rain when there is cricket on is, of course, one of the few certainties in life, along with death and taxes. But instead of using logic, it’s like that those involved in the scheduling instead bowed to the heed of commercial agreements with broadcasters. Squeezing in as much international cricket as possible, for the sake of squeezing in international cricket and for the sake of squeezing every last cent out of a broadcasting deal, is becoming the norm.

Between those in charge of scheduling the NZ tour and the Champions Trophy, nobody seemed to check with each other about the possibility of reserve days and by the time the 50-over competition came out, reserve days weren’t factored into the equation. Of course, the ICC is equally guilty of doing things for the sake of doing them. The Champions Trophy wasn’t even meant to happen this year, it was supposed to be that ludicrous notion of a Test Championship. But once the ICC had realised they need to oblige to commercial agreements, the tournament was slotted into the only window in the year they could find, no matter how tight it all was.

With the last semi-final being played on Thursday, it would have made some logistical sense to play the final on the Saturday with a reserve day in place on Sunday. But logistical sense apparently doesn’t apply when it comes to ICC tournaments. Instead they insist on a travel day following a match day, which is followed by a training day. It takes about three hours or so to travel from the one side of England. Why exactly a whole day is needed for that, even when travelling by bus, is baffling. Unless the teams are travelling by horse-drawn carriage, it’s a bit absurd to suggest cricketers are so pampered that they need an entire day for travel purposes.

Logic, or lack thereof aside, the custodians of the game have done the consumers of it a disservice. It took six hours before play got underway on Sunday and even with the pouring rain, the fans who invested time, money and effort into making it to Birmingham never even thought of leaving the stadium. They deserve better than a truncated match to decide a 50-over competition. Those watching on TV deserve better than boards buckling to broadcasters’ every whim; they deserve better because they are the ones who make the game possible. To treat them as if though they’re simply another pawn in their ever growing game, is a shame.