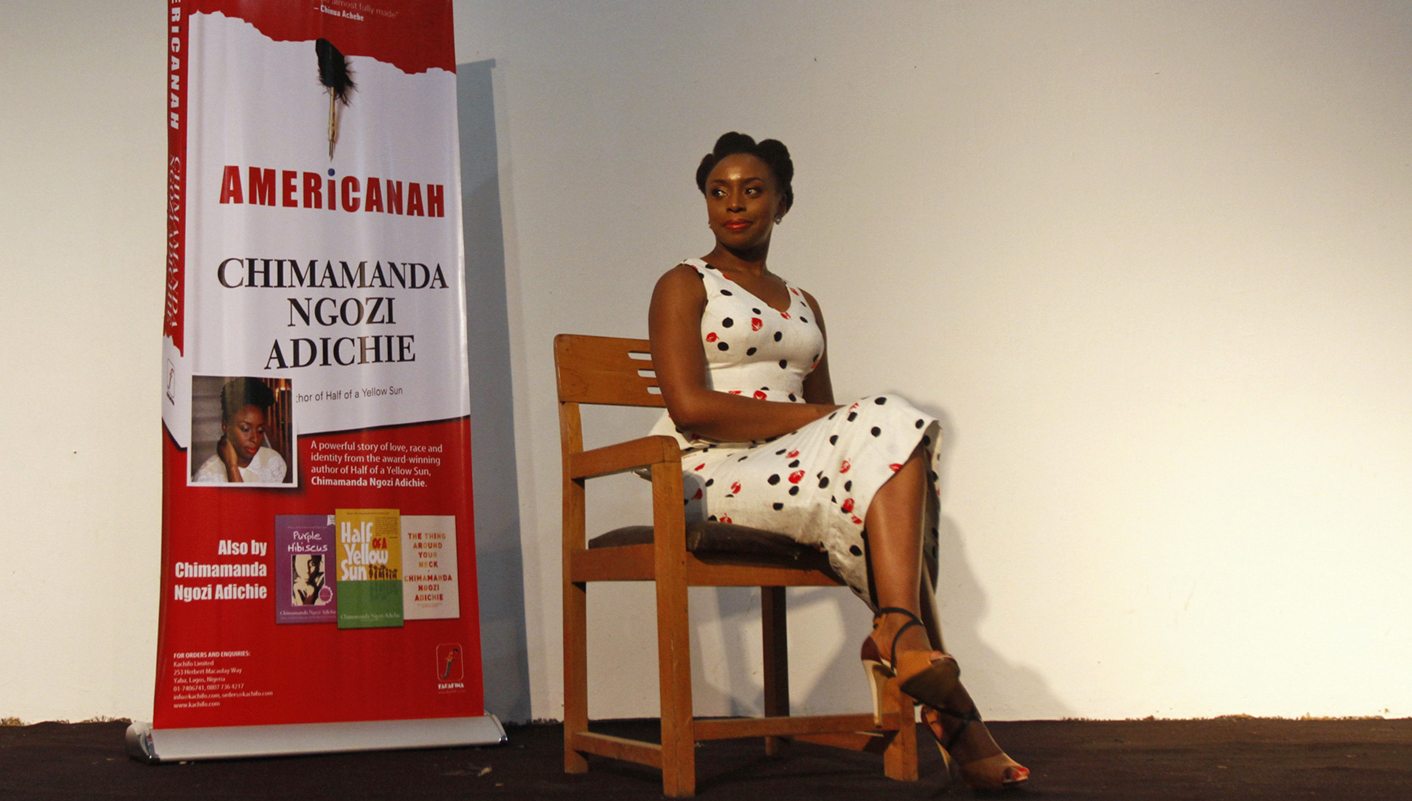 All her life Chimamanda Ngozi Adichie has been writing in the shadow of an African literary giant. But Chinua Achebe’s gone now, and it is Adichie’s turn to stake her claim as Nigeria’s pre-eminent author and one of Africa’s most important voices. With her new novel, she’s done exactly that. By SIMON ALLISON.

Africa has but a handful of world-famous writers. This is not, I believe, an indictment of the continent’s literary talent, but simply a reflection of the globalisation of Western culture and Africa’s generally poor literacy rates (it is self-evident that it’s more difficult for people who can’t read to write books and in Africa there are still far too many people who can’t read).

Nonetheless, Africa has produced some giants of the literary world. In South Africa, there are Nobel laureates Nadine Gordimer and JM Coetzee (although Coetzee has abandoned his native land for Australia). Up north, in Egypt, think Naguib Mahfouz, and in Kenya, Ngugi wa Thiong’o.

But the biggest giant of them all – the author who almost single-handedly put African literature on the world map – must be Nigeria’s Chinua Achebe, who passed away earlier this year (Achebe also abandoned his native land, choosing comfortable university tenure in America over Nigeria’s uncertainties).

His death was a huge loss, but don’t worry – Nigeria’s got a ready-made replacement in the wings.

You might have heard of Chimamanda Ngozi Adichie. She’s the author of Purple Hibiscus and Half of a Yellow Sun, a wonderful, heart-breaking novel about growing up during the Biafran War that does more than any history book can to illustrate the horror of that conflict, and its complexities.

She’s been fighting off comparisons to Achebe all her life. They are both Nigerian, both Igbo, both educated in similar institutions, although Adichie is much, much younger (she’s only 35 now; Achebe was 82 when he died). Bizarrely, and most improbably, they also lived in the same house – Adichie’s family moving into the Nsukka University accommodation vacated by Achebe. That the two most famous authors from a country of 163-million people shared the same rooms is the kind of coincidence that neither could get away with in their writing.

Or maybe it’s not such a coincidence.

“The fact that I grew up in a house that Chinua Achebe previously lived in has become possibly the most important fact that people know about my life,” Adichie said in a 2008 speech to an American writer’s association. “I’m so often asked, ‘What was it like?’ and I ﬁnd myself remembering things: waking up at night to go to the bathroom and stopping near a staircase and hearing literary spirits whispering secrets in my ear, secrets about plot and character and sentence structure.

Whatever the connection between the two, Adichie is an extremely accomplished author in her own right – as she’s proved again in her latest novel, Americanah, a work of a different order to anything she’s written before. The book spans three continents and grapples fiercely with issues of race, identity and what it means to be an African today – questions that Adichie doesn’t necessarily answer, even as she destroys any answers that you thought you already had.

The plot follows the lives of Ifemelu, a bright Nigerian student who gets a scholarship to America where she becomes a well-known blogger, and her university sweetheart Obinze, whose search for a better future takes him to an unfriendly England that spits him out and sends him back home in handcuffs. Ifemelu also returns to Nigeria, but hers is a conscious decision to abandon the so-called American dream and come home.

At its heart, this is a book about the African diaspora experience – something to which Adichie herself can relate, having moved to the United States for higher education and now dividing her time between the US and Nigeria. And some of its most compelling moments are when Adichie writes in exquisite detail about incidents that might have happened to her as a Nigerian woman in America (I have no idea how much of her personal life is in the novel, but Ifemelu’s narrative at times reads like an autobiography in the third person).

The very first scene of the book, for example, has Ifemelu board a train out of Princeton, where she’s on a fellowship, to a dodgy suburb somewhere in New Jersey. She wants to get new braids in her hair, but posh Princeton salons don’t do braids, catering only for long, straight, white-woman hair. This forces her as a black woman into a long expedition to a poor working class area, a journey she alternately resents for its racial overtones or celebrates for letting her touch base with other diaspora Africans, most of whom don’t enjoy Ifemelu’s – or indeed Adichie’s – comfortable surroundings.

At university, the single most significant lecture I attended was on the concept of “othering” – the social and psychological impact of being different, non-mainstream, the other. As a privileged white male I had never been the other, never knew what it’s like to be marginalised or discriminated against on the basis of something completely beyond my control – gender, race, etc. This manifests itself in all kinds of ways, from full-blown racism to subtly different experiences, such as Ifemelu’s above.

If you’re not sure what I mean, I won’t explain any further – because, in Americanah, one of Africa’s finest living writers has done it far better than I can ever hope to. For me, this forensic examination of an issue that is so central to the African experience is what sets Americanah apart from and above her previous novels, and makes Adichie a more than worthy successor to the late Achebe.

Oh, and it’s a cracking read too. DM

Photo: Nigerian novelist Chimamanda Ngozi Adichie poses for a photograph after a reading of her new book ‘Americanah’ in Lagos April 27, 2013. REUTERS/Akintunde Akinleye