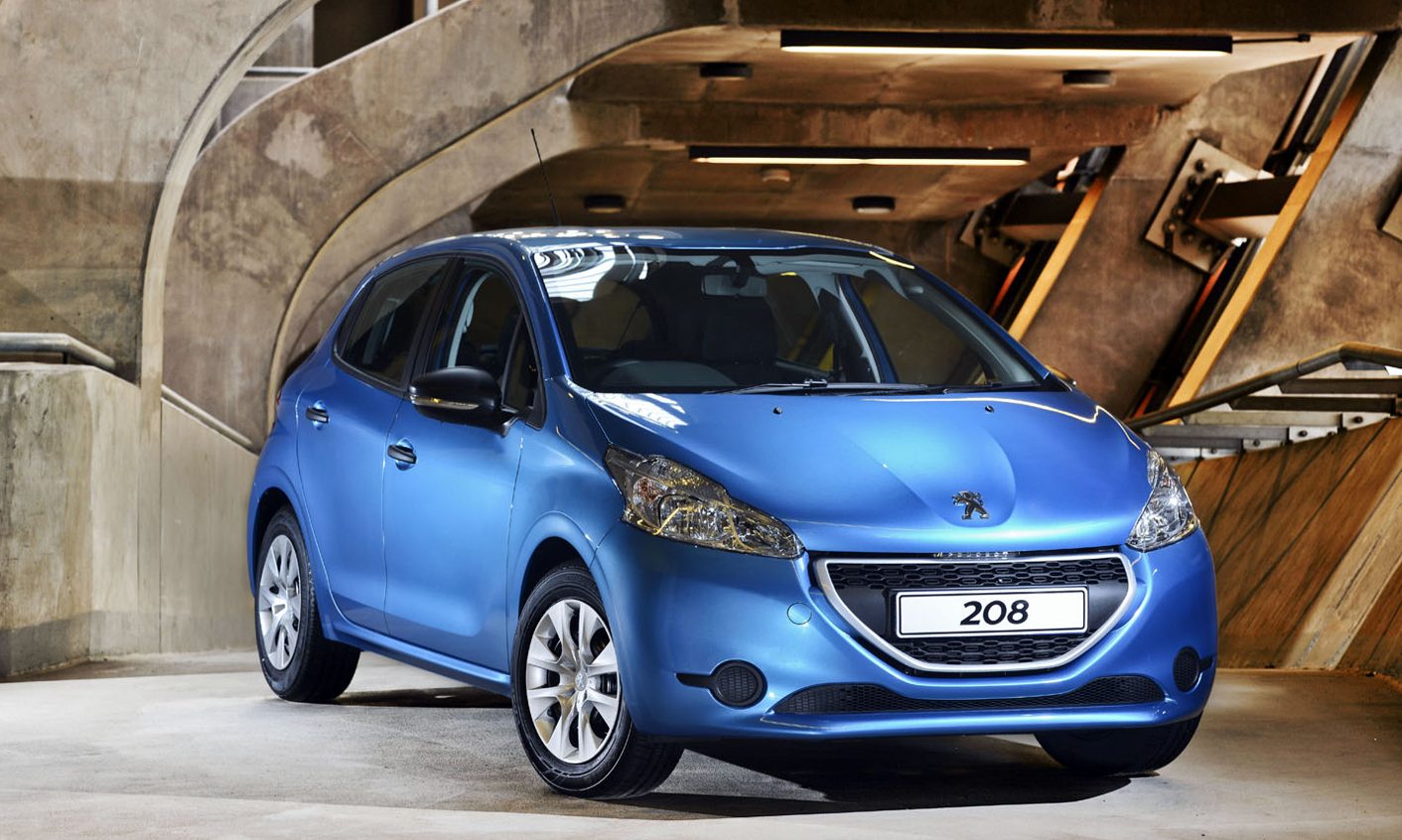 Gone are the days when small cars were also cheap and nasty, and bigger was always better. Today’s crop of superminis are aiming far higher than the budget-beater territory they used to occupy. Linking compact footprints to smart interiors, and powered by fuel-miser engines, they’re also attracting a new generation of motorists. By DEON SCHOEMAN.

The buying down trend is nothing new in the context of a South African car market hustled and cajoled by factors such as high prices, rising fuel costs and a general lack of disposable income.

But the growing demand for smaller, more efficient cars is not just driven by economic factors. Compact cars have also become smarter, swifter – and more eco-friendly.

In fact, today’s subcompacts are so appealing that buying big is becoming increasingly unnecessary – unless you have an extended family, or simply like to wallow in automotive ostentation.

The Peugeot 208 1.2 Active is quite the opposite: a compact expression of French chic, with the kind of clean-cut styling that appears unassuming at first, but teases the eye with distinctive details.

The 208 has been around since November last year, but much of the initial limelight was stolen by the range-topping, bigger-engined 1.6 Allure. As that nomenclature implies, the Allure’s urge is provided by a 1.6-litre powerplant, which many South African motorists would still consider the bare minimum for any self-respecting hatchback.

No wonder then that the 1.2 Active has often found itself forgotten in the shadow of its more powerful sibling. And as I’ve found out after a week in its company, that’s a pity, because in many ways, the smaller-engined 208 is a more rewarding package.

In aesthetic terms, the 208’s execution is sleek and contemporary, if not exactly head-turning. It’s the kind of car that escapes initial attention, but then has you taking a second look as it drives past. And indeed, it’s a car that warrants closer attention.

While the silhouette is typical contemporary compact hatchback – smooth lines, rounded corners, clean cut lines – the detailing is what sets the 208 apart. The intricate headlights are massive, faired-in affairs that caress the metal contours of the fenders and the bonnet surrounding it.

At the rear, LED lighting adds visual distinction to the claw-like shape of the tail light clusters, turning what would normally be a utilitarian item into a work of illuminated art. Even the pattern of the plastics for the grille and the lower air intake feature a finely filigreed design, while small Peugeot badges front and rear look more like precious metal ingots than nameplates.

It’s obvious that a lot of care has gone into these design elements – small details that make a big difference. The bonnet’s concave central contours provide an inverse platform for the streamlined Peugeot Lion. The exterior mirrors are finished in grand, glossy black. And the waistline’s crease adds a certain poise and athletic promise.

All of this sounds much more upmarket than any subcompact hatchback has a right to be – and that theme is carried through to an interior that exudes sophistication. Is this really a Peugeot? Yes, sir!

Glossy, piano black finishes alternate with muted aluminium accents. The seats are cloth-upholstered, but feature swirls and textures that look and feel smart and individual. And then there’s the colour touch-screen display: a piece of high-tech one-upmanship that many a so-called premium car can’t rival.

The screen provides an intuitive interface for the trip computer and the car’s multimedia capabilities, which extend from multi-speaker sound to Bluetooth telephony and USB-based audio sources.

But not all elements of the interior design will be equally popular. The small, slightly oval steering wheel is a case in point. It’s too small to frame the main instrument binnacle directly behind it, and in fact is meant to be adjusted so that the driver sees the dials above the steering wheel’s rim.

It’s an arrangement that isn’t always ergonomically comfortable for especially taller drivers, and requires some getting used to for everyone else.

The real showpiece of the 208 1.2 Active is the engine. The 1.2-litre three-cylinder unit features a lightweight all-aluminium construction, four valves per cylinder and variable valve timing. Max power output is 60kW, linked to 118Nm of torque. The gearbox is a five-speed manual, driving the front wheels.

A 1.2-litre engine? In a subcompact hatchback? And a three-cylinder to boot? Yes, I agree – one can’t help but think that the engine will simply be too puny to cope with the 208’s size, regardless of how aerodynamically shaped it is.

Only one way to find out, then! Turning the key (yes, it still has one of those) wakes up the engine almost instantly – and the gruff, husky sound is pure three-cylinder magic. It makes the Peugeot sound masculine and sporty.

That said, don’t expect fireworks. This is not a hot hatch (next month’s 208 GTI will fill those shoes). The 1.2 Active gets off the mark briskly and remains eager to please as you progress through the gears.

You won’t win any traffic light Grand Prix, but you won’t fall asleep trying either. Throttle response is decent and progress swift, as long as you’re prepared to exercise the engine with a certain level of enthusiasm.

Frankly, the gearshift action could be snappier – the throw is too long, and the action too imprecise – but remember, this is an urban commuter, not a racer. And the steering always feels over-assisted, like those wheel-and-pedals kits you can buy for your daily Gran Turismo fix. Where’s the force feedback button when you need it?

Still, Peugeot says the 1.2 Active will get from 0 to 100km/h in just more than 12sec and reach a 175km/h top speed. And yes, at sea level, those stats are plausible. But I prefer to think of the 1.2 Active as brisk and peppy, with enough oomph to get you from point to point.

More importantly, you’ll enjoy the experience. The 208 rides with the smooth aplomb that the French still do better than most. It’s not scared to tackle our scarred roads, but never resorts to sloppy chassis manners for the sake of comfort.

The anodyne steering apart, the 208 corners with glee and achieves higher levels of grip than expected. Because it’s a 1.2, you feel the need to carry more speed into corners than usual in an effort to retain momentum for the next uphill and the 208 obliges, proving that the chassis is capable of much more than the drivetrain can muster.

But for many would-be buyers of this new-world hatchback, fuel consumption and low emissions will be the more important talents and the 208 1.2 Active obliges in no uncertain terms. The official combined-cycle consumption figure is a miserly 4.5l/100km, and at 104g of CO2 for every kilometre travelled, there’s no emissions tax to pay, either.

Real-world economy is not as cut and dried, though. Much depends, as always, on the route, the load on board – and in how much of a hurry the driver is. My experience (and I’m always in a rush) is that the car will achieve mid to high 5l/100km consumption figures at Reef altitudes without trying too hard – and low 4s if you drive like a granny.

But push hard on hilly terrain and the little engine will make you pay for making it work so hard – although, mid-7l/100km stats are still pretty darn good!

The Peugeot 208 1.2 Active is one of a new generation of subcompacts vying for the attention of buyers with the promise of advanced tech, smart cabins and nippy performance, all while running on the sniff of an oil rag.

The Active execution, with all its bells and whistles, means that this Peugeot is not a budget beater, as the R177,200 retail price confirms. But given its keen consumption figures, running costs should be attractively low, while the standard five-year/100 000 km maintenance plan (unusual in this segment) removes service costs completely for the first 60 months.

Add its eco-friendly credentials, its high equipment levels and that unmistakably French character, and the 208 1.2 Active’s growing popularity is completely warranted.

Then again, the 208 GTI arrives in SA next month – and for a petrolhead like me, that car’s 147kW turbo engine, rorty exhaust note and meaty handling may just turn out to be a more appealing option…  DM