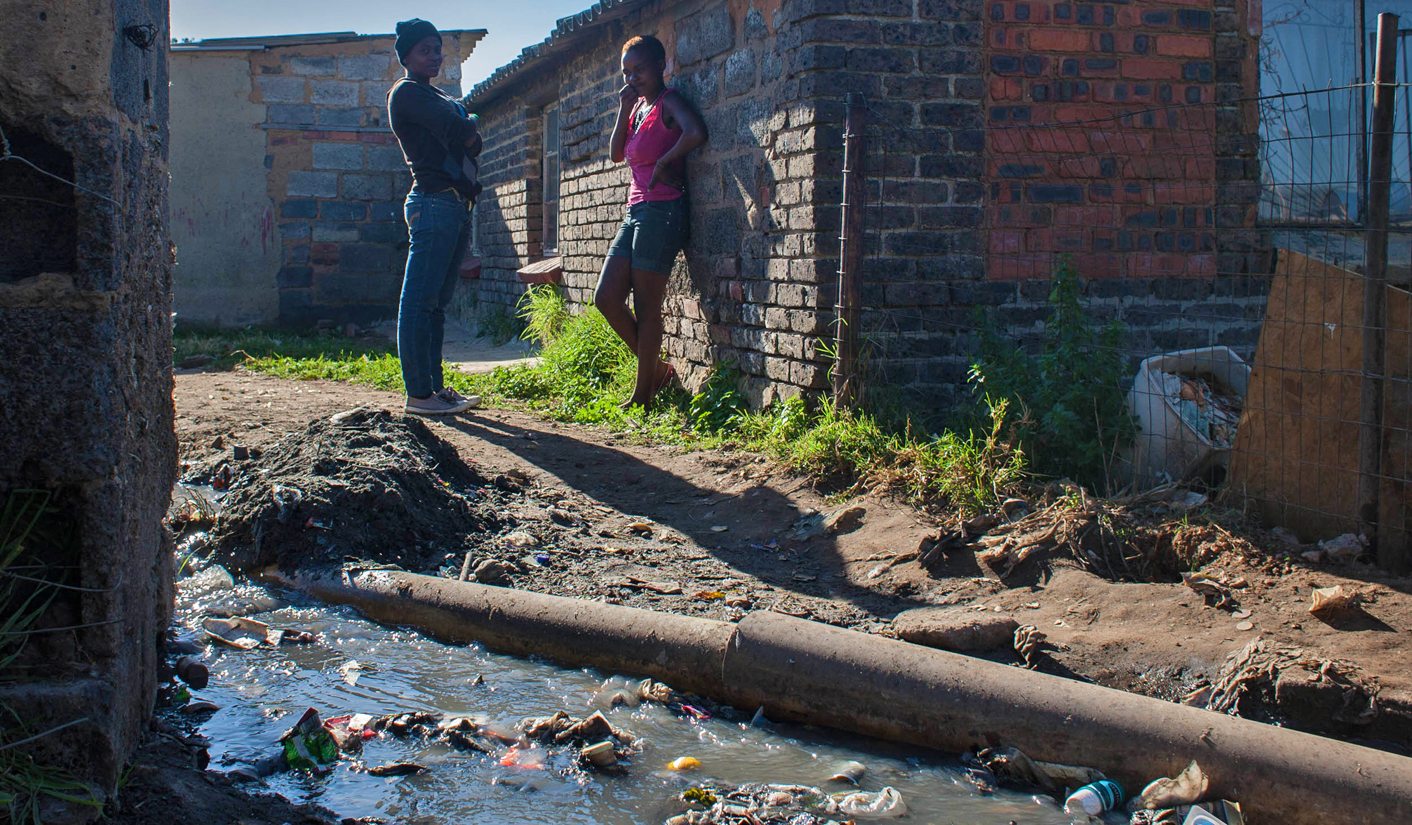 The Democratic Alliance led media through a Soweto hostel on Wednesday to highlight the water and sanitation issues in the area. Little has been done to improve the plight of residents, for whom the most basic service, sanitation, is an everyday struggle. After years of failed promises from the ANC, there is little hope another party would improve the situation. Still, the DA gave it a shot. By JESSICA EATON, BHEKI C SIMELANE & GREG NICOLSON.

From a distance, Mzimhlophe hostel is just another Soweto township. But walking in, you see burst sewage pipes and a carpet of rubbish. A pungent smell hangs in the air. The sloping landscape of the area ensures that the sludge from the burst pipes flows through houses and streets. The filth eventually settles where it will be disposed of by those who feel they are most affected. “We are living in a sea of filth, my boy,” said one resident.

Members of the media joined the Democratic Alliance (DA) on a walk-about of the Soweto hostel on Wednesday to get a better sense of the sanitation conditions and service delivery problems facing residents. DA national spokesperson Mmusi Maimane called the conditions appalling. He asked if anyone would ever want their daughters or sons living in such conditions. The streets are almost impassable when it rains.

Sicelo Sithole, the constituency’s support officer, has a shack situated metres from three toilets shared by more than 100 people – all overflowing with human waste. He described how every evening he has to watch helplessly as neighbours throw plastic bags or buckets full of human waste through the toilet windows. The filthy toilets offer no privacy. Openings at the back of the small structures meant for windows have no glass and passers-by can see inside.

Residents Mojalefa and Tumi Mogorosi raised serious concerns about their current living arrangements where two families share a unit. They pointed to a block of flats that has recently been built in the area. According to the Mogorosis, the flats are divided into two sections. One is meant as RDP housing and the other section’s units are rented out.

Photo: DA national spokesperson Mmusi Maimane called the conditions appalling and asked if anyone would ever want their daughters or sons living in such conditions. (Greg Nicolson)

The whole community is waiting to see what will happen, because even if they were to move in, there are not enough units for everyone. The Mogorosis say this is the reason the community will not allow anyone to move in. Residents vowed that should people from outside their area be moved into the flats, there will be war.

The houses they share are not spared from disputes. The Mogorosis say conflict often result from something as simple as children roaming into neighbours’ yards. Occasionally, there are accusations of witchcraft that stem from community conflict.

As the journalists waited with their cameras and notepads at the ready, Soweto resident Puseletso Latedisa unlocked a corrugated iron cubicle to reveal a spotless toilet. Latedisa arrived in Soweto in 1977 and after more than 30 years of dealing with filthy and overcrowded toilets, she decided to take the problem into her own hands, as the ANC-led municipality has done nothing.

“These three toilets here are for 200 people. But this one is for five families. I collected money from my neighbours and we bought this toilet ourselves and I even made a cleaning schedule. This week is my turn. But this clean toilet you see here is not the government, it’s me.”

When asked if the DA’s presence in the township and their concern for the dirty toilets and poor drainage in the area had convinced her to vote differently this year, she said, “I’m not supporting anyone or anything this year. In 36 years I see no changes and no differences in my life. It’s just the same.”

Bongiwe Madlala is young enough to be Latedisa’s daughter. She lives down the road and has only been in the township for 10 years. For most of that time she has had a stream of water running underneath her shack. Her stoep has collapsed and the damp is visible through the concrete floor. As she pulled up her shirt to reveal a scar she says is from the operations she has had because of living in the wet house, she said, “Elections are next year. That is why there are many politicians in our streets asking me what I need. But after the elections I will not see them again. I don’t vote for anybody. We have been fooled since ’94.”

Photo: Resident Kgotso Mothosola hand washes clothes in one of the basins located throughout the area. (Greg Nicolson)

Tshepo Mhlongo, a DA councillor, stood straddling the stream in front of Madlala’s one-room house. “This is not about electioneering. It is about the dignity of our people and Ubuntu,” he said.

The walkabout took place while ANC Youth League (ANCYL) members have been in the news for the “faeces war” against Western Cape Premier Helen Zille over sanitation issues in that province.

Photo: Some shared toilets like this one are no longer in use while others are too few and lack basic privacy. (Greg Nicolson)

“We invite the ANCYL to come toyi-toyi here. In the Western Cape, the DA delivered toilets but they are still raising issues,” said Mhlongo. “The Western Cape has the best sanitation in the country, but what we see here in Gauteng is a disgrace. It is a pigsty; it is appalling.

“But we are not the Youth League. We are not going to do stupid things like them. We will follow the laws and we will take this issue to the Human Rights Commission. If you drive on the highway you see the glamorous Soweto, but this is the real thing. These are the real issues they should be focusing on,” said Mhlongo. DM

Main photo: Two young residents chat near a flowing stream of filthy water. Such streams are common to most streets in the area. (Greg Nicolson)