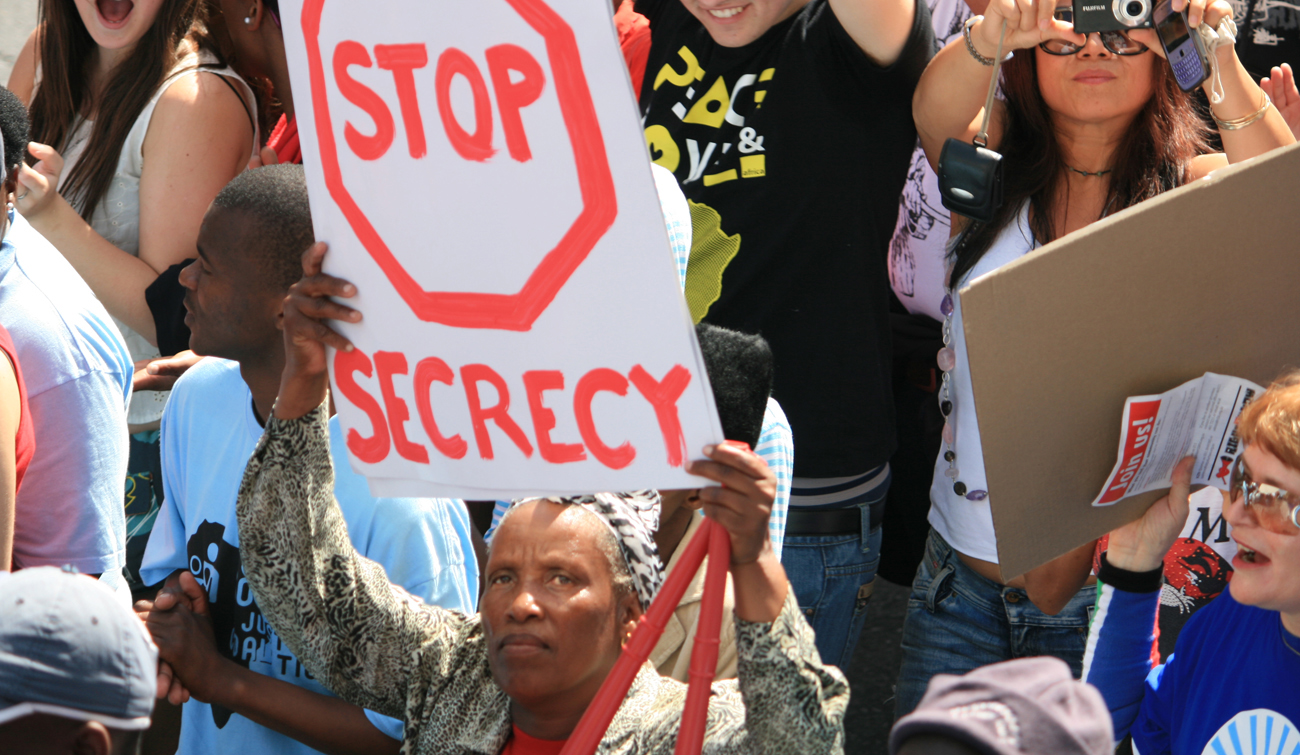 South Africans pay some of the most expensive rates in the world for cellphone and data charges. Now a civil society group is taking on the big cellphone companies. The Right2Know organisation says that exorbitant cellphone charges are barring many South Africans from accessing their basic right to communicate – and that companies like MTN and Vodacom are needlessly exploiting the South African public. By REBECCA DAVIS.

On Wednesday morning in Cape Town, a few hundred people mobilised by the R2K campaign gathered to march to the offices of Vodacom and MTN to make their concerns heard. R2K coordinator Mark Weinberg told the Daily Maverick that, in the end, they were unable to arrange sufficient transport to cater for all the people who wished to attend the march.

“When you talk about this issue to people, they initially think you’re crazy, but they quickly click on to the fact that [access to affordable cellphone rates] is something that enables very basic services in their lives,” Weinberg says. “And when you tell them how much more South Africans are paying for cellphone services than people elsewhere in the world, they’re amazed.”

R2K has hitherto been best known for its vocal campaigning against proposed pieces of secrecy-based legislation in South Africa, like the infamous Protection of Access to State Information Bill. But Weinberg explains that they don’t think their current campaign deviates from the principles they’ve been upholding until now.

“Section 16 of the Bill of Rights says we have the right to exchange information and opinion. That, together with the broad right of access to information, lays the basis for a rights-based argument on this matter,” Weinberg says. The idea that paying less for cellphone services may constitute a “right” might sit uncomfortably with some, especially as it’s not explicitly enshrined in the Constitution. But Weinberg points out that the right of access to free electricity operates in a similar way.

“The Constitution says we have the right to energy. It doesn’t explicitly mention electricity. But on that basis, the government legislates for free access to small amounts of electricity,” Weinberg says.

There are international precedents for this rights-based approach to accessing communication or information services. In 2012, the United Nations’ Human Rights Council unanimously backed a resolution stating that internet access and online freedom of expression was a basic human right. (Even China, which hasn’t historically been a huge defender of internet-related freedoms, signed the resolution.)

The notion hasn’t met with universal agreement elsewhere, however. American computer scientist Vint Cerf – dubbed one of the “fathers of the Internet” – has been an outspoken critic, suggesting that “technology is an enabler of rights, not a right itself”. Human rights bodies say this approach is too limited. In a response to Cerf, Amnesty International’s Scott Edwards opined that it is more and more difficult to separate technology from access to rights. “The increasing necessity of internet access for the world’s most impoverished as it relates to health, education, employment, the arts, gender equality—all things we have the right to enjoy – means that Information Technologies (yes, the Internet) are inseparable from the rights themselves,” Edwards writes.

Weinberg argues that there’s another reason why telecommunications shouldn’t be seen just as a matter for private business: because South Africa’s “electromagnetic spectrum” – the airwaves, in other words – constitute a national resource, and a finite one at that. “On that basis, government is entitled to regulate it more aggressively,” Weinberg says.

At various points over the last decade, the Independent Communications Authority of South Africa (ICASA) has voiced concern over the issue of South Africa’s high cellphone rates, and three years ago forced a cut in rates. This month, the body announced a review of regulations relating to communications costs, with new regulations to be finalised by the end of October. “It’s very difficult for young people, especially at schools, if data is this expensive,” Communications Minister Dina Pule told parliament last month.

A number of studies have found that South Africa’s cellphone charges rank among the most expensive in the world. A 2011 study by the International Telecommunications Union put South Africa at 77th out of 82 countries when it came to affordability of these services. But Vodacom’s Corporate Affairs spokesman Richard Boorman told the Daily Maverick that this doesn’t represent a fair picture.

“The South African market differs from others in that our offerings are typically constructed around promotions that optimise the use of the network throughout the day, and help to avoid congestion at peak times,” he said. “Cross-border price comparison studies typically only look at the published tariffs and don’t take any of these discounted or free minutes into account.”

Weinberg begs to differ. “It’s probably true that international studies, due to complexity, aren’t always comparing apples with apples, but it can’t be a coincidence that we consistently appear within the top range of most expensive countries,” he said. He cited the World Economic Forum’s Global Information Technology Report for 2013, which found that South Africa ranked at number 117 out of 144 countries when it came to affordability of cellular tariffs.

R2K believes there’s little justification for these high prices, because South Africa’s infrastructure is relatively well-established: better, at any rate, than some countries with cheaper cellphone rates. One of their particular bugbears is the high costs of SMSes in South Africa. One research paper has estimated the production costs of SMSes at R0,026, but MTN and Vodacom charge up to R0,80 per SMS: a profit, R2K says, of 3,200%.

Boorman again says this doesn’t represent the full picture. “The argument that the cost of sending an SMS is far lower than the price misses the point that the network has to be built and maintained and the entire corporate infrastructure supported, for anything to be transmitted.”

Weinberg says that the people who suffer most from high SMS costs are those who lack access to modern technologies like instant messaging or WhatsApp. “People without smartphones rely most heavily on SMSing, and those are most likely to be poorer people,” he says.

The poor suffer in another way from the current cellphone pricing model, because pay-as-you-go rates are far higher than “postpaid” (i.e. contract) rates. “Poor people are more likely to be on pay-as-you-go services, and they pay more per minute and per megabyte,” says Weinberg. “These asymmetric rates play their part in ensuring that wealth remains with the rich, since the poor end up essentially subsidising those wealthy enough to have cellphone contracts.”

R2K has been carrying out extensive consultation within poorer communities in order to determine what the most problematic aspects of cellphone service charges are felt to be. An issue which kept coming up was that of airtime expiring before it had all been used up. The Consumer Protection Act (CPA) specifies that vouchers should remain valid for three years, but on prepaid cellphone services they expire after a few months.

Vodacom’s defence of this is that they are complying with the letter of the law. “As per Section 63 of the CPA, all prepaid vouchers issued by Vodacom (including airtime vouchers, be they physical or virtual) remain valid for three years or until the date on which they are redeemed for goods, services, or future access to services,” Boorman says. Weinberg contends that this is a cop-out: “They argue that once you’ve entered the numbers, you’ve redeemed the voucher”. In the view of R2K, this practice is tantamount to theft.

R2K’s campaign is designed to put pressure on the ICASA review in order to make sure that the cost of airtime and data does receive further regulation as soon as possible. They are calling on cellphone companies to cooperate by providing information on their business costs and price structures, which they say the cellphone giants have in the past refused to do. A number of their other suggestions are likely to meet with more resistance to implement, and counter-arguments about logistical difficulties. For instance, R2K wants the range of numbers which are free to call – currently only essential services like police and ambulance – extended to take in schools and hospitals.

“The bottom line is that these measures would require [cellphone companies] taking less profit,” says Weinberg. “We’re not talking about businesses on the verge of collapse here. They are the biggest sports advertisers in the country, driving investments throughout Africa.”

When the R2K marchers reached the offices of Vodacom and MTN in Cape Town on Wednesday, Vodacom sent out their head of security to accept the memorandum.

“MTN said they wanted us to go have a meeting in a boardroom in Jo’burg,” Weinberg says. “But there isn’t a boardroom big enough for the kind of discussion we want to have.” DM

Photo: Activists and supporters of the Right 2 Know campaign hold a night vigil outside the Constitutional Court in Johannesburg September 19, 2011. REUTERS/Shayne Robinson