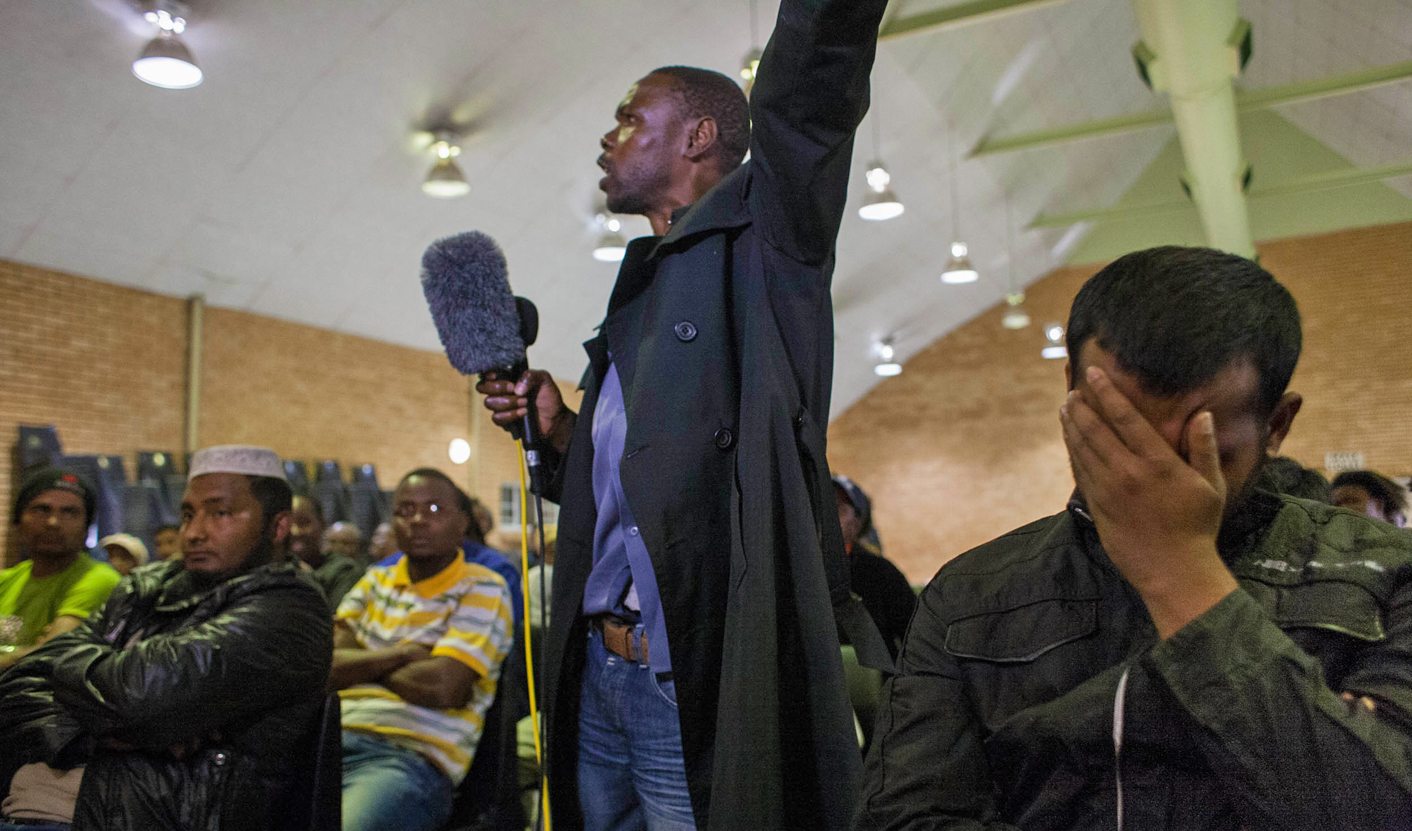 Foreign nationals have returned to Orange Farm after being displaced by violence in May. Tension between foreigners and South Africans, however, continue to fester beneath the tentative calm. By KHADIJA PATEL.

An event that was originally billed as a ceremony to mark the re-integration of foreign nationals back into Orange Farm, one of the scenes of violent protests against foreigners last month, has shown instead glaring differences between South Africans and their foreign neighbours. In Orange Farm, too – where residents and foreigners jostle for scarce opportunities.

When Daily Maverick visited Orange Farm in July last year, a stop at the Orange Farm Human Rights Advice Centre revealed that the centre offered legal support to residents, as well as helping people “with the daily struggle they face in Orange Farm that can range from anything like unemployment to domestic violence to dealing with the hash-ups made by Home Affairs”.

While the centre also offers assistance to refugees and asylum seekers in Orange Farm, it is the very presence of such foreigners in Orange Farm that has been the cause of strife in the township in recent weeks. Foreign-owned shops were looted and foreigners were forced to seek shelter at the local police station until calm was restored.

Simon Motha, ANC chairperson of the party branch in Orange Farm and a local councillor, said a committee had been formed to address the violence meted out against foreigners last month. He echoed the stance of national government last month: It’s crime, not xenophobia.

“I think we have consulted with our people in all these five wards. Our people were very positive to say indeed there are some genuine concerns, but the general community supported us to say [that] in Orange Farm there are no xenophobic attacks. What we have found out in terms of that level, [is that] the criminal elements are there,” Motha said.

“That is why it was key to say they must not live in isolation, they must be part of us, in whatever that they are doing; it was one those that was raised by our own people,” he said.

Photo: Sheikh Akther says he just wants more protection for his store in Orange Farm. After 12 years in South Africa, another of his stores was looted during the recent attacks, costing him around R3 million in stock.

Professor Lauren Landau from the University of the Witwatersrand’s Centre for Forced Migration believes that perceptions of foreigners not integrating into South African society are flawed and include a dangerous historical precedent.

“Accusing communities of not integrating is a problematic [technique] which was used against other communities like the Jews in Europe, and while there might be some truth to it, there can be no justification for targeting these communities. As if targeting them would improve social integration,” Landau said.

The ANC branch chairperson said the community engagements had revealed that South African residents of Orange Farm believe foreigners should hire South Africans in their businesses to better achieve integration.

“Also, the issue of empowerment: they were raised to say, how best can we empower our own people? If they come to South Africa, the unemployment rate is part of it – with our people it’s vulnerable in terms of that – but we have indicated these are genuine issues; to say they must also be able to employ or partner with our own local people,” Motha said.

“Also, other issues that were raised by our people: how best can we create a database so that they could be regulated… so that no one must then undermine the position of our own, in terms of South Africa?”

He noted that this wave of violence started in Sebokeng and then spread to Orange Farm and other areas of Sedibeng, acknowledging that the violence was not isolated to any one particular area.

The unrest in Orange Farm prompted the Democratic Alliance (DA) to launch its “Battleground Gauteng” campaign on 15 May. The DA leader Helen Zille visited Orange Farm that day. She proposed her party’s own solutions to the area’s multitude of problems: chief among them was the promise that the party would implement the youth wage subsidy if elected in 2014.

While the DA was not represented on the committee, or at the meeting on Tuesday, it is exactly the complexity of issues driving violent protest – and violence against foreigners ­­– in places like Orange Farm that the party seeks to exploit in its campaign to win the province from the ANC.

Photo: Parbes Chowdhury works in a takeaway store in Orange Farm owned by Pakistani migrants nearby where the recent attacks on foreign-owned stores were discussed on Tuesday.

Beneath the positivity from the committee, the gathering on Tuesday was still far from a “welcome back” party for foreign nationals. For the most part, the foreigners who attended the meeting sat docile, listening to the conversation but rarely contributing. A reconciliation between foreigners and the community appeared a long, long way off.

And part of the reason reconciliation between foreigners and South Africans remains distant in Orange Farm is the way in which the committee has engaged with the community since the attacks last month.

According to the representative of one NGO who was part of the committee’s meetings with the Orange Farm community, the meetings were marred by political jostling by ANC members who refused to allow the meetings to continue unless the ANC branch chairperson facilitated proceedings.

In Sebokeng, as in Orange Farm, rumours continue to blame local businessmen for instigating the attacks on foreign-owned businesses because they are unable to compete with the foreign shops’ lower prices.

“I also want to assure the people in the house here to say there is no one that belongs to Orange Farm business sector who is behind the attacking or whatsoever, be it foreign nationals or whatsoever,” he stressed.

Dube, too, encouraged better integration of foreign nationals into the community to ward off the violence.

“We need to change the ideology and everything, therefore as business people we are saying: let us join hands and work together, please don’t close yourself [off], be it in your shops or whatsoever,” he said.

“I should think every one of us here is aware that we don’t have refugee camps here in South Africa, so people need to be integrated, but the manner we integrate must be structural so that there is no element of crime whatsoever.”

Alfani Yoyo, a representative of CORMSA, an umbrella body of more than 26 organisations working for the rights of refugees and migrants across the country, said the failure to integrate foreigners into the community thwarted government’s attempts to foster social cohesion.

“So many people in the communities, when we were holding the public consultations in different wards, expressed their concern that you always confine yourself in your little shops and your containers,” he said, addressing the foreigners in Orange Farm.

“You do not open up and that does not help or assist in any way if we have to achieve social cohesion that the government has been trying to achieve for many years now. You need to come out of your containers, you need to meet other people, and need to mingle with the people you are living together with, the same people who are buying from your shops, you need to be friends with them, not only when you are sitting on the other side of the window and you give them a smile and that’s the end of the story.”

The onus to establish peace, then, is on the immigrants.

Constable Shaan Motsapi, a communication officer at the Orange Farm police station, said the police were most concerned with the “criminality” that motivated the attacks on foreigners.

“Our main concern as the police was the criminality [of the attacks on foreigners], and our mandate as the police is clear, that the community of Orange Farm, be it from other countries, be it black, be it white, whatever colour, our mandate is to make sure that all of you and your belongings are safe,” Motsapi said.

The Chairman of the African Diaspora Forum, Marc Gbaffou, thanked the community for welcoming the foreign nationals back.

He said, “We saw people who came out to welcome the brothers and sisters, hundreds, thousands of people who come out to say ‘let the migrant community come back’, because they are part of Africa, and we are also part of Africa – we cannot live separately.” DM

Main photo: Mr Zondi, a South African, addresses the issue of foreigners in SA to a forum on the issue of attacks on foreign-owned stores in Orange Farm while a number a foreign shopkeepers listen.