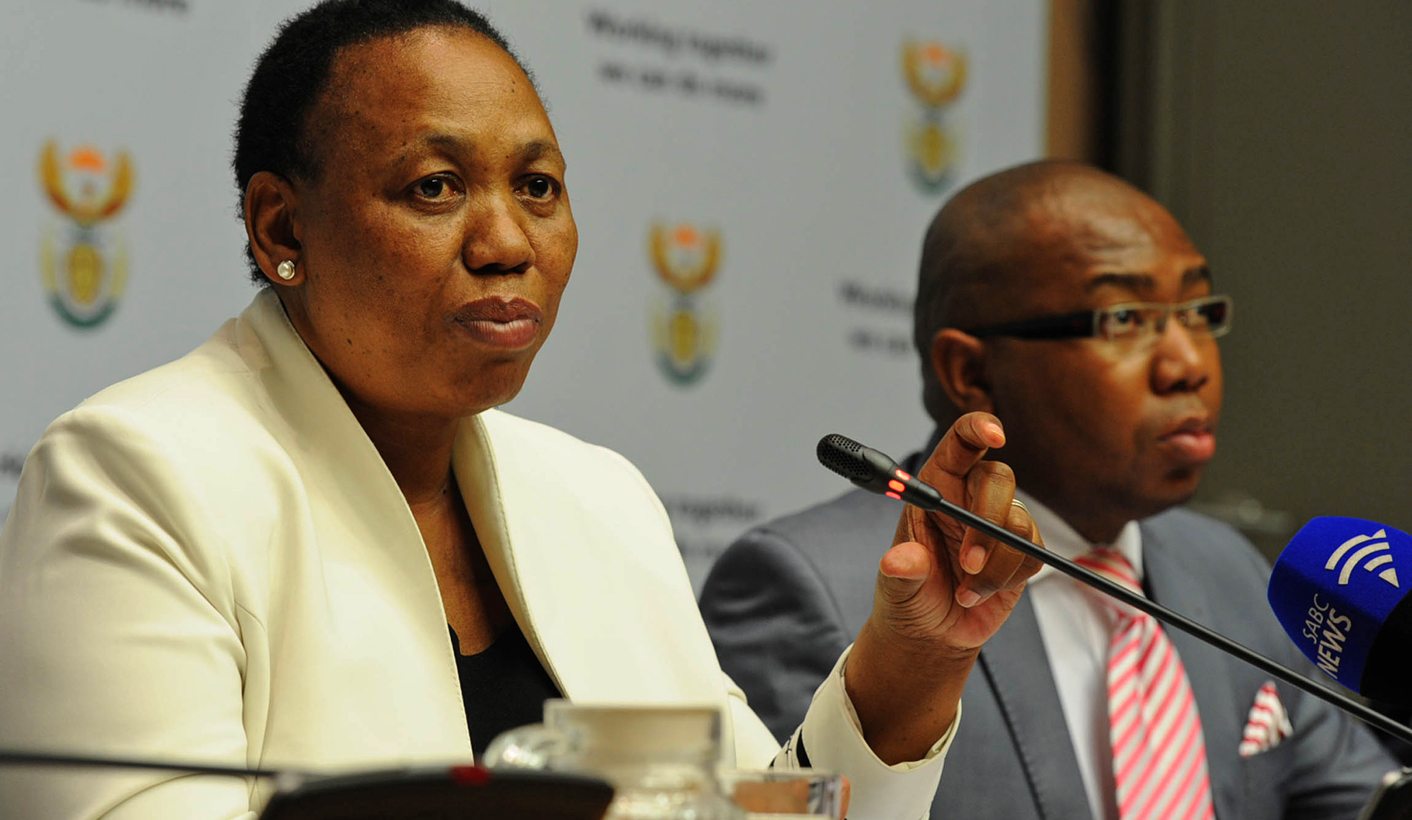 “A new policy will come into effect in 2014 mandating the learning of an African language in all schools,” announced Basic Education Minister Angie Motshekga just over three weeks ago, upon delivering her department’s budget speech. Since then, details of what this might look like have been scant. On Tuesday, however, the parliamentary portfolio committee on education heard a little more about it – and it sounds like the policy may simultaneously be too much (in terms of timeframes and teachers) and too little (in terms of the intended effects). By REBECCA DAVIS.

Few details have been forthcoming up to now as to the Department of Basic Education’s proposed new language policy. In response to questions posed by the Mercury newspaper following Motshekga’s budget speech, the department said that an African language would be introduced “incrementally” to students in Grades R and 1. The department also said it would be phasing in the policy already this year at selected schools in each province.

In comments made to eNCA at the same time, department spokesman Panyaza Lisufi indicated that the policy had been in the works for three years. Lisufi described the policy’s purpose as being “for unity in our country”, saying that “social cohesion is the reason we have started the programme”. The move within basic education is paralleled by at least one initiative in higher education, as the University of KwaZulu Natal has announced its intention to make isiZulu language classes compulsory for all first-year students from 2014.

At Tuesday’s meeting of the parliamentary portfolio committee on education, it fell to Mathanzima Mweli (Acting Deputy Director General: Curriculum) to give an outline of what he called the IIAL: Incremental Implementation of African Languages. The policy, Mweli said, is “long overdue”, and he added that there was ample empirical evidence to suggest there is a “desperate need” for it.

Explaining the legislative background to the policy, Mweli said that it flows from the constitutional provisions about languages: Section 6 requires that “all official languages must enjoy parity of esteem and must be treated equitably”. The South African Bill of Rights provides for everyone to receive an education in the official language of their choice, Mweli pointed out, though there are two caveats: in public institutions, where this is “reasonably practicable”.

Multilingualism in South African education has been policy on paper since 1996’s “Language in Education Policy”, which clearly states that “being multilingual should be a defining characteristic of being South African”, in order to “counter any particularistic ethnic chauvinism or separatism through mutual understanding”. As Mweli noted, the passage from policy in 1996 to implementation in 2014 represents a “considerable period”.

He pointed out that there have been a number of provincial initiatives with regards to raising the status of African languages running for some time. In the Eastern Cape, for instance, a pilot project is testing the introduction of Xhosa as the language of learning and teaching at the intermediate phase (Grade 4 – 6) in 74 schools. Often, however, well-meaning initiatives in this vein from schools have been left to the support of governing bodies rather than the government. Mweli pointed here to the Western Cape, where from 2006 a number of “former Model C schools” voluntarily requested the introduction of African languages but failed to receive backup from government. Similar situations have played out in the North West province and Mpumalanga. In certain cases, groups of schools have clubbed together to share the expenses of African language-teaching.

It appears that the sense of urgency around the Department of Basic Education’s move to accelerate the quality and quantity of African language teaching at this point is due to an increasing belief that many of the problems in the country’s education system can be placed at the feet of a language issue. “Learning outcomes are poor because of poor language proficiency,” Mweli said. “Research has confirmed this on various occasions, but very little has been done by institutions or civil society to address this problem.”

So what’s the plan? Well, it’s to improve proficiency in, and the utility of, previously marginalized African languages, by introducing learners to learn an African language “incrementally” by Grade R.

While many may be on board with the principles behind the idea, Mweli was least convincing when it came to laying out how, practically, this would be achieved. The availability of teachers was not a problem, he said; only the availability of paid teaching posts, which would have to be budgeted for. This seemed a direct contradiction of a point made earlier in the meeting by the Department of Higher Education’s Dr Green, who stated that the South African education system had “huge difficulty” attracting African language school leaders to work at the foundation phase.

When it came to all the new textbooks which would be required – in a context where, obviously, many of the old ones are not reaching their intended learners – Mweli was similarly reassuring, stating that the department had “developed capacity” to make the necessary workbooks available.

The policy is by no means set in stone yet; it will still be put out for public comment. Mweli said they would also be launching an “aggressive campaign” targeting parents and learners to win support for the measure. The DA’s Shadow Minister for Basic Education Annette Lovemore expressed skepticism over the timeframes, given that the policy is supposed to be implemented in 2014: it’s already mid-year, she pointed out, and the draft policy still has to be released for public comment, a final policy decided on, and only then can implementation begin.

In general, most of the MPs present expressed cautious approval for the idea, though one expressed confusion over one element of Mweli’s presentation. It appeared, she said, that one of the African languages from which learners would be permitted to pick would be Afrikaans. Stressing that she did not mean her point to sound “racist”, she nonetheless asked: if Afrikaans is counted as an African language, what will meaningfully change in the current situation?

It is certainly a valid question if one of the policy’s stated aims – as has been repeatedly stressed – is “greater social cohesion”, as well as the need to raise the status of “previously marginalized” languages. If Afrikaans can indeed be substituted for a majority language like isiXhosa or isiZulu, in the policy’s parameters, then the department will open themselves up to the suggestion that they are not meaningfully shifting the status quo. Mweli provided little clarification after the fact, however, saying only that the department was grateful for the committee’s “sound advice”, and that they hoped to return soon with a more concrete policy.

Any move to foster multilingualism in as socially-fractured country as South Africa should presumably be welcomed. But a question which will need to be addressed is as follows: how will the additional teaching of African languages escape the wider systemic problems of the education system? During Tuesday’s meeting, portfolio committee members consistently lamented the quality of teaching more generally.

One problem raised was the low status accorded to teaching as a profession in South Africa, which was suggested as a reason for an inability to attract many desirable candidates. The DA’s Lovemore pointed out that the countries which consistently fare best in educational measurements worldwide – like Finland and South Korea – aggressively target top graduates to move into teaching. The profession cannot be seen as a “fallback option”, more than one committee member said: serious thought needs to go into new strategies for teacher recruitment.

Another concern mentioned was that certain provinces have far less difficulty attracting teachers: Gauteng, for instance, is a desirable employment location and therefore depletes the pool of teachers available for other provinces. This has to be addressed, and teacher education scaled up in provinces like the Eastern Cape and Limpopo.

Without the wider problems of the image of the teaching profession, the quality of teachers and the availability of teachers being resolved, then, it’s hard to see how a scaled-up language teaching initiative can hope to succeed – however worthy it may be. Mweli ended his presentation by quoting Mandela: “If you talk to a man in a language he understands, it goes to his head. If you talk to him in his language, it goes to his heart.” DM