Mandela & me: A journey of uncertainty and perception in the shadow of a legend 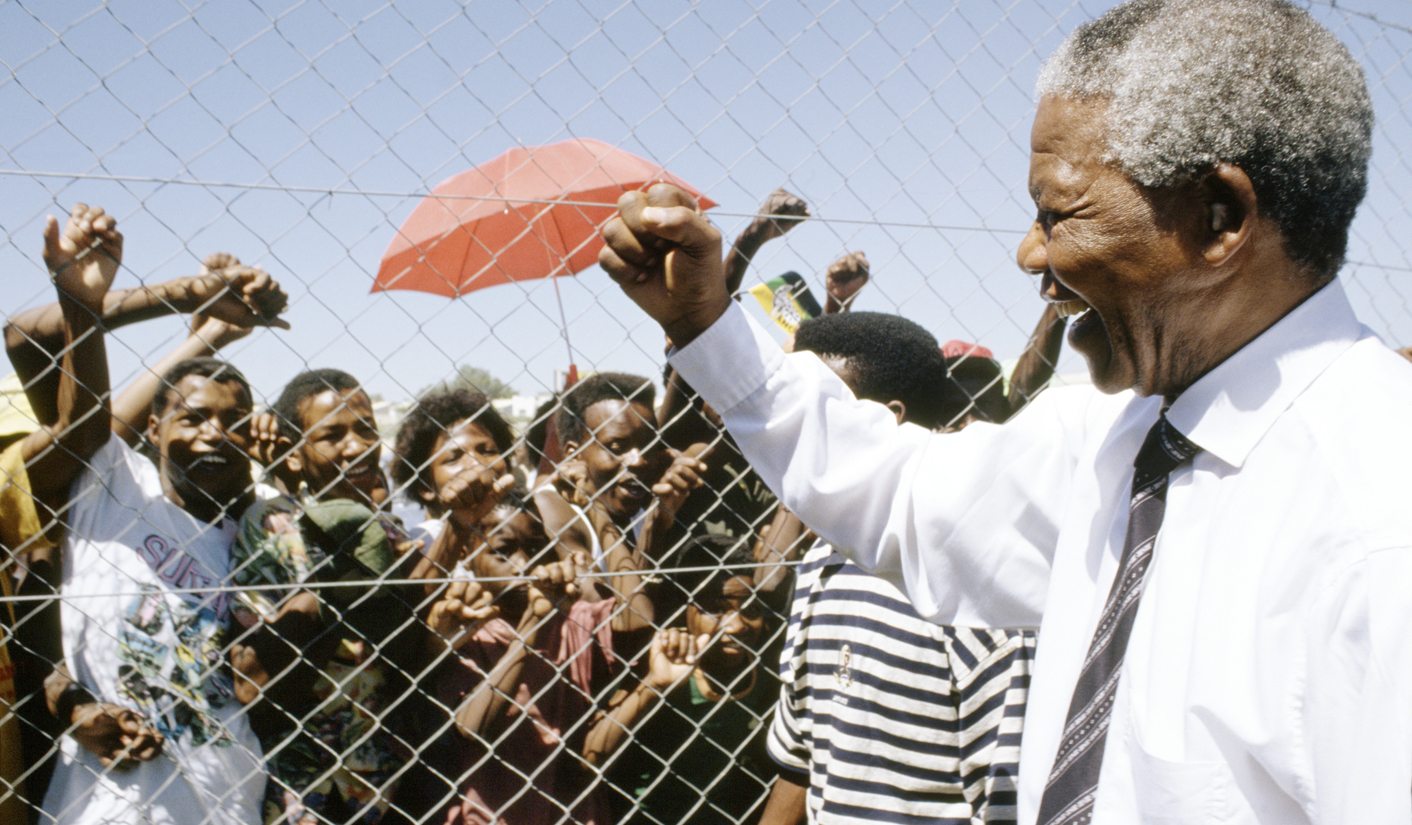 From the writer's childhood, Mandela drifted in and out of his life, first as the polite gardener next door, later as a political prisoner, and finally as the iconic leader he would grow into. GREG MARINOVICH reviews the lifelong stamp of a legend.

(This article was first published in June 2013)

As a child, the centre of my world was my maternal grandmother, Bosica Balich, whom I called Baba. Both my parents worked, and it was my Baba that looked after me through those endlessly long days of childhood.

Growing up through the deprivation of the First World War in the Balkan Peninsula, she was serious about food. If a crust of bread fell from the table, she would immediately pick it up, kiss it and make the sign of the cross before eating it. Bread, above all, was never to be wasted.

Her passion was her vegetable patch. As the South African morning sun rose higher, and it became too hot for us to keep working, we would retreat to the deep shade of the tangled branches that covered a large, dome-shaped rock. Baba would wipe the sweat off her brow and puff away at her first cigarette of the day, while I ‘pruned’ the inner branches of the rather nondescript Highveld tree to make our refuge even more cave-like.

Those times sitting with her on the rough, weathered rock were the highlight of my day, because it was story time. Her stories were mostly traditional European ones like Red Riding Hood, but with a twist of cruelty that has been edited out of the English versions I read to my children.

Just behind our refuge, across a rusty barbed wire fence, lay the neighbouring farm, Lilliesleaf. That farm was the secret headquarters of the banned SA Communist Party, and was where the SACP and members of the African National Congress’s armed wing – Umkhonte we Siswe – met. It was here that Nelson Mandela, Govan Mbeki, Walter Sisulu, and the others plotted the overthrow of the Apartheid regime.

In July of 1963, when I was not yet a year old, my grandmother noticed that a car had taken to remaining parked for very long periods at the top of our drive, which ran parallel to Lilliesleaf’s drive. A lone white man sat for hours in it. My grandmother took up a thermos of coffee for him, and confirmed her suspicion that he was a policeman.

Within days, the Lilliesleaf farm itself was raided and a slew of top ANC operatives arrested. Mandela himself had been caught the previous year in a police roadblock, apparently on the strength of a CIA tipoff.

He had been pretending to be the caretaker at Lilliesleaf and the arrest warrant was for ‘David Motsamayi, caretaker and cook’.

The arrests led to the famous Rivonia Trial of 1963 – 64, where Mandela gave his “I am prepared to die” speech from the dock.

Years later, when Mandela was the world’s most famous prisoner, languishing on Robben Island, and I was a young man rebelling against society and Apartheid, Baba would tell me about her neighbour’s blue-overalled ‘gardener’, as she called Mandela. “He was a good ‘boy’, very well-mannered,” she would say with a mischievous smile. “He would bring down the milk from where it was delivered at the top of the drive.”

Lilliesleaf and our driveways ran along their common fence to the street where milk in glass bottles was delivered in little white battery-powered carts. Mandela, ever the gentleman, could not resist bringing the milk down to my gran, who was rather charmed by the gesture.

Perhaps my Baba was even charmed by Mandela, but for now, I won’t let my imagination run away with me.

Mandela’s release in 1990 was a pretty surreal series of events for me. As a fledgling photographer I was thrilled when a British agency asked me to cover it. It was a great chance to make a break into the business, but I was conflicted. I had also managed to gain access to an otherwise secretive ceremony in the far north of the country, scheduled for the same day.

The distance between Pollsmoor Prison, where the news crews of the world were camped out, and the mysterious stockade of the Modjadji was some two thousand kilometres. I had to choose between two competing once-in-a-lifetime shoots.

I decided to drive north, away from Mandela’s release. The chance to document a secret ritual in the realm of the fabled Rain Queen, origin of Sir Ryder Haggard’s Ayesha in ‘She’, won through. I hoped that there might be a delay in Mandela’s release, and there was. The radio droned on for hours as Mandela failed to appear. I hoped that the delay might even allow me to get to Cape Town, but as I drove along the rural back roads, farmworkers lined the way, excitedly and yet nervously holding hand drawn cardboard signs celebrating his release. Mandela was free.

Just a few months after Mandela’s release, the townships around Johannesburg erupted in violence between the ANC and the Zulu Inkatha Freedom Party. To my professional fortune and personal misfortune, I photographed two killings in the first month of violence. The first was of Inkatha supporters killing an alleged ANC supporter. It was the first time I had ever witnessed a murder and was horrified. I was especially horrified that I had not tried to intervene in some way.

The second murder was of ANC supporters stabbing and burning alive a man said to be Inkatha. This time I repeatedly did try to stop the killing, yet with no success. It was these images that would win me a Pulitzer, among other prizes.

The incident was filmed by the BBC’s Panorama programme, who later approached Mandela for comment on my images, which had gone around the world. He responded that one had to understand that it was a white man who had taken those images, and thus that a white man’s aim, my aim, was to show the ANC as barbaric; unable to govern. I was gutted.

I photographed Mandela frequently through the years. He would always recognise the regular correspondents and greet us warmly. I doubt he ever connected me to the photographer he had publicly reviled. Or maybe he did; Mandela was a politician through and through, hardly ever allowing his personal feelings to get in the way of his political discipline.

On several occasions, I was tempted to ask him about my Baba and the milk bottles, but my awe of the man, and an apprehension of how he might respond, prevented me from blurting it out. By then, Baba was lost in the distant realm of senility, and not being able to share it with her made it seem rather meaningless.

Mandela’s life as president-in-waiting was filled with drama, both political and personal. While leading the negotiations to bring white rule to an end, he fought tensions within the ANC as violence claimed tens of thousands of lives.

He loyally stood by his wife Winnie during her trial for the kidnapping of murdered child activist Stompie Sepei, despite her clear involvement in his kidnapping, if not directly in his death. She was acquitted, but her status as ‘Mother of the Nation’ had been forever tarnished.

As the end game of Apartheid played itself out, Mandela’s leadership was mostly impeccable. From the bloody massacre at Boipatong, to the assassination of Chris Hani by right wing extremists, Mandela never allowed himself to get distracted from his goal. He used each incident to keep pressure on the white regime in the protracted negotiations towards a non-racial South Africa. When ANC president Oliver Tambo passed away, it was Mandela that the ANC chose as its leader.

While he stamped some of his personality on the ANC during that period, especially in reconciling with political opponents like right-wing Afrikaners and former Bantustan leaders, Mandela still slipped in some critical areas. One was to never condemn his wife for the excesses of revolutionary power that led to Stompie’s death, and other incidents. Another was his blind spot on the danger of Aids to the nation. He just ignored it, perhaps in part because of the white regime’s propaganda that said it was a disease brought back from the ANC’s camps in exile.

The other was related to the ‘Hostel War’, as described in The Bang Bang Club by Joao Silva and myself. Mandela, Winnie, and Hani were usually the leaders to arrive at the scene of a massacre, or attend the funerals of otherwise anonymous ANC supporters killed in clashes. It led me and others to believe that they truly felt for the loss of those individuals; yet as the years have passed I have provisionally revised my opinion. At the time, it seemed so important, and Mandela would address the young lions, boys and girls fighting and dying on the dusty streets in the name of liberation. As the years since then have passed, and the lives of those young lions have not been improved, nor their sacrifices rewarded, it makes me think it was a bloody sideshow. All the while, the real battle was being fought in smoky rooms, where political deals were struck. The rest was theatre, macabre, deadly theatre.

Today, the majority of those former child soldiers do not eat of the fruits of freedom. They are unemployable, as they forsook their education for revolution. Connected ANC members rose to the cream of society through sweetheart business deals, while the anonymous foot soldiers live and die in poverty.