Back to square one: Another Lonmin strike looms 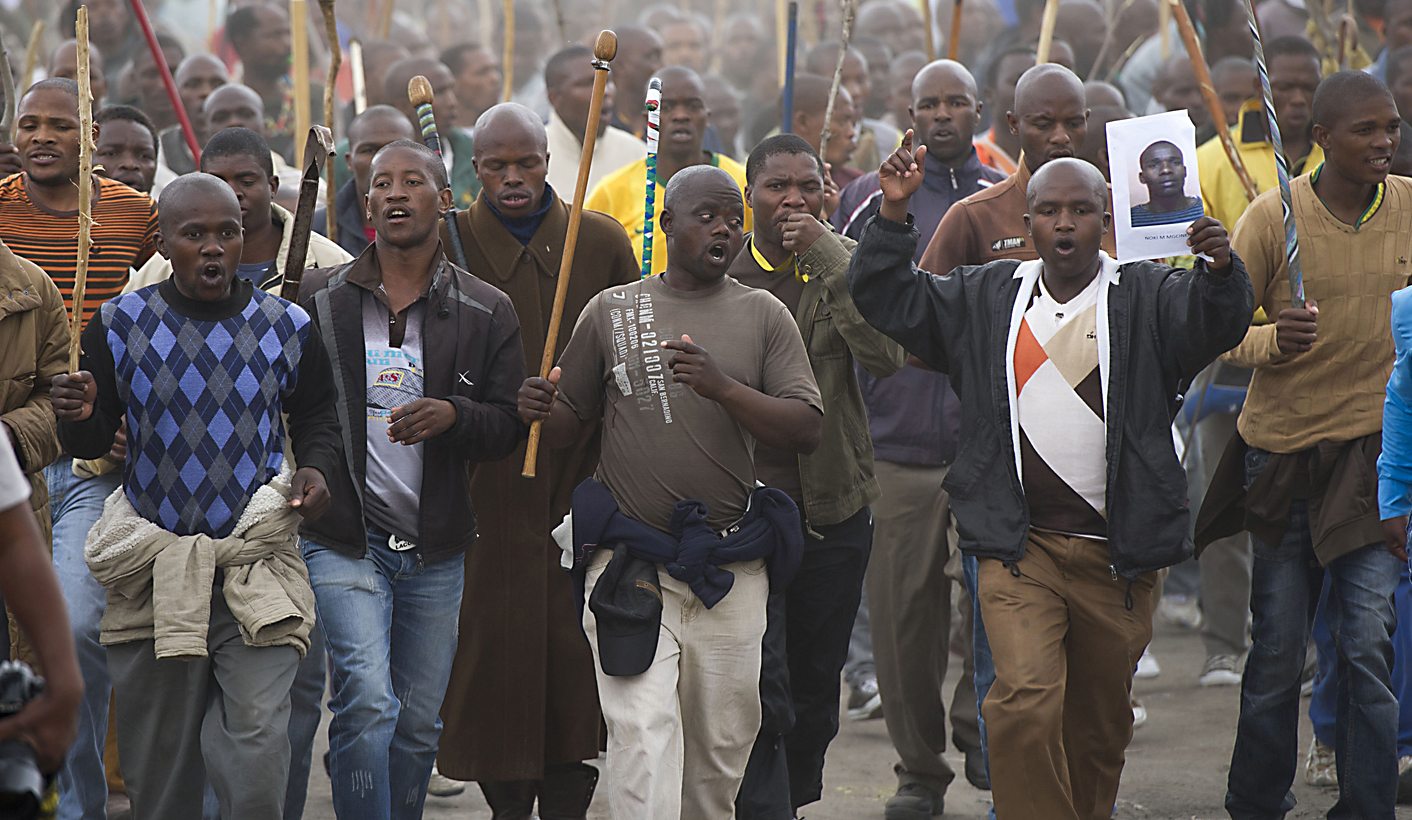 The stage has been set for another strike on the North West platinum belt, this time at Lonmin, the very scene of August 2012’s bloody Marikana massacre that claimed 34 lives. After Lonmin and majority union AMCU were unable to reach consensus on a recognition agreement, the strike looks like a natural next step. By MANDY DE WAAL and THAPELO LEKGOWA.

After weeks of talks between Lonmin and the Association of Mineworkers and Construction Union (AMCU) about the terms of a recognition agreement between the two parties, the new majority union at the platinum mine has called for a strike.

Lonmin stated on Wednesday that AMCU now represented about 70% of that sector of workers; that includes miners and rock drill operators. The National Union of Mineworkers (NUM) – once the most popular and powerful union in South Africa – isn’t currently able to muster representation over 20% amongst these workers.

The mining company has two collective bargaining forums, one which constitutes those workers with whom AMCU enjoys its majority. The second collective bargaining forum comprises artisans, supervisors and what Lonmin calls “skilled workers”. The trade unions recognised by this forum are Solidarity, NUM and the United Association of South Africa (UASA), which is one of the oldest unions in the country.

AMCU wants the two bargaining forums to be rationalised into a single congress that will negotiate on labour issues. Lonmin asserts that this is problematic because it has binding contractual agreements with the NUM, UASA and Solidarity, and says that AMCU wants to bargain collectively beyond its mandate with those employees who haven’t afforded the union any real clout.

The trade union is headed by Joseph Mathunjwa, who earlier blamed tensions at the mine on management. “For AMCU to have organisational rights at Lonmin, you have to have more than 50%, which was an agreement signed by (the) NUM, Solidarity and UASA. Thereafter AMCU is the majority at Lonmin, so (the) same must apply. The management must engage with the union to set a threshold which then will regulate any union’s organisational rights sitting at the workplace,” he said.

“It is the management who made this tension,” said Mathunjwa, who told SABC News that AMCU had abided with the management treaties with other unions to date, but questions why – now that his union has a majority – Lonmin wanted to reset the thresholds required for recognition.

Mathunjwa added that things had been peaceful at Lonmin until such time as the print media broke news of AMCU’s majority with miners and rock drill operators at the platinum mine. “It was quiet. We signed a peace framework agreement with all stakeholders – (the) NUM, AMCU, Solidarity, UASA, and we could see the fruits of that framework. Then all of a sudden once the media came up and said AMCU is that majority at Lonmin, then we had these killings,” the union leader said.

AMCU is demanding recognition thresholds of 35% for basic organisational rights which includes getting union fees from Lonmin employee deductions; 45% for collective bargaining which includes having full-time shop-stewards at the platinum mine, together with union offices; and 50%+1 to be recognised as the majority union which would afford it the rights to set thresholds with Lonmin.

Further, the mining company wants to implement changes on 1 July 2015 so as to “give all parties time to prepare for the change.” Lonmin stated that it was in the process of terminating the NUM’s agreement with the company.

When Lonmin and AMCU weren’t able to see eye-to-eye on the recognition agreement, the process was referred to the Commission for Conciliation, Mediation and Arbitration (CCMA). This intervention proved fruitless and Lonmin requested that the stalemate be subject to arbitration. The CCMA scheduled the arbitration for Wednesday 26 June 2013.

But AMCU took the decision to the workers at a mass meeting of miners that filled Wonderkop Stadium in Marikana on Wednesday. “We told the commissioner, ‘you are mad’. He can’t decide for us when we were the ones who brought the matter to the CCMA,” Mathunjwa told workers.

He then said that there were two options for the miners – to go to arbitration or to strike. A resounding return roar signalled that the workers had opted to strike, rather than to opt for mediation.

It is only two weeks since the last strike at the mine, when workers downed tools in a two-day unprotected strike mid-May. The day after the strike, Lonmin management asked the NUM to move its offices. The NUM took the matter to court, which ruled that the NUM had until 16 July 2013 to prove its majority.

The NUM’s discomfort is palpable. A couple of days ago Lonmin suspended eight shop-stewards representing the NUM, in connection with membership fraud. It is claimed that the shop-stewards falsified stop orders to try to beef up membership numbers. Lonmin said that some 150 cases of membership fraud had been investigated.

And now the markets will wait and watch to see what will happen at Lonmin. AMCU has given the mining company until Tuesday 11 June to acquiesce to its demands. “We wrote a letter requesting a meeting (with Lonmin) in a bid to avoid a strike. We requested to meet the company on Monday. If we do not have an agreement by Tuesday, we will serve the company with a 48-hour notice to go on strike,” said Jimmy Gama, AMCU’s treasurer.

But despite the dark shadow of Marikana’s bloody history, miners say they are ready for this strike. Daily Maverick spoke to a miner who identified himself as Hlongwane, who said: “We are ready to strike as workers – we will not be intimidated by anyone including (the) NUM.” Last year’s events of (the) workers shooting will not be forgotten but it cannot be a hurdle towards our course as it (will) hold us back.” DM