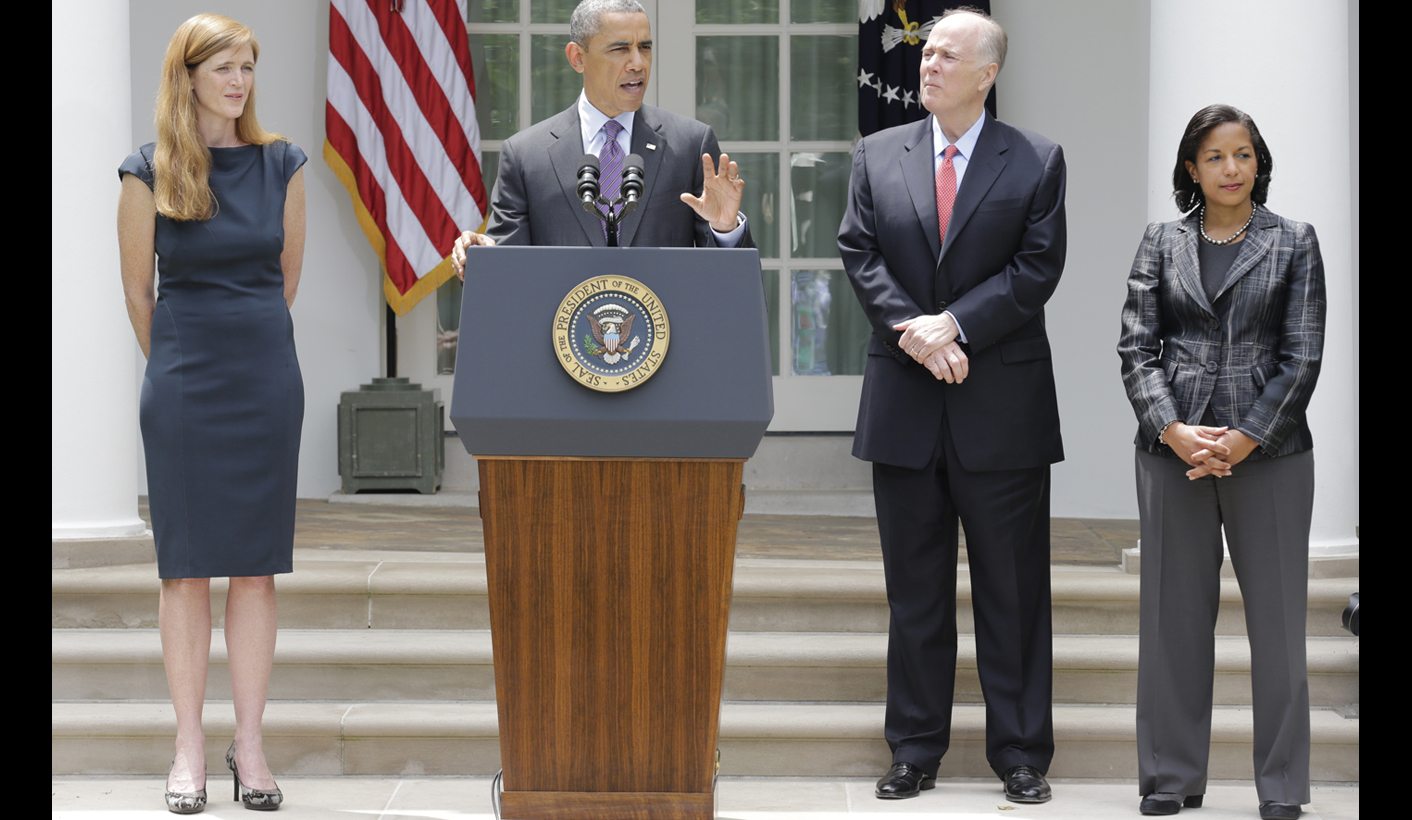 Rice, selected to replace Tom Donilon in the post, is expected to play a high-profile role in defending Obama’s foreign policy, particularly on the civil war in Syria. Obama has come under fire for his cautious approach to mounting evidence that President Bashar al-Assad used chemical weapons against rebels seeking to oust him.

The selection of the pair raises the question of whether Obama’s foreign policy might place more emphasis on human rights issues during his second term.

Rice’s appointment could anger Republicans who have sharply criticized her role in the handling of last September’s attack on a U.S. diplomatic compound in Benghazi, Libya that killed four Americans, including U.S. Ambassador Christopher Stevens.

Obama had been expected to pick Rice, 48, as national security adviser since she withdrew last December from consideration to replace Hillary Clinton as secretary of state under intense criticism from Republicans about Benghazi. She had been Obama’s first choice to replace Clinton, but the job instead went to John Kerry.

Rice will take over from Donilon in July as the official who coordinates U.S. foreign policy from the White House. Obama will avoid a congressional fight, though, because the post does not require Senate confirmation.

“She is at once passionate and pragmatic,” Obama said, flanked by Donilon, Rice and Power in the White House Rose Garden. “I think everybody understands Susan is a fierce champion for justice and human dignity, but she’s also mindful that we have to exercise our power wisely and deliberately.”

In her remarks, Rice did not mention the Benghazi attack or the Republican criticism. She said she looked forward to working with “our country’s most experienced leaders from both parties.”

Republicans have accused Rice of playing down the Benghazi incident for political purposes by initially describing it on Sunday TV news shows as the result of a spontaneous protest, rather than a terrorist attack.

Republican Senator John McCain, a leading opponent of the way Obama has handled the Benghazi controversy, tweeted that he disagreed with Rice’s selection but said, “I’ll make every effort” to work with her.

However, another Republican, Senator James Inhofe of Oklahoma, said Rice’s role in commenting on the Benghazi attack should disqualify her for high office.

“Since that time she has done nothing new that would improve or enhance her qualifications to hold such an important diplomatic and national security position within any administration,” said Inhofe, the senior Republican on the Senate Armed Services Committee.

Under Rice, the conduct of foreign policy is likely to be centralized out of the White House, raising questions about how much leeway will be given to Kerry, said Aaron David Miller, a foreign policy expert at the Woodrow Wilson International Center for Scholars.

The shakeup comes as Obama grapples with a welter of foreign policy challenges, from Syria to China’s rise on the world stage, which will be a focus this week when he meets Chinese President Xi Jinping in California.

Power’s selection for the U.N. post was a bit of a surprise. U.N. and U.S. diplomats had anticipated that Obama would choose Deputy Secretary of State Williams Burns.

Power’s discretion and diplomatic skills were called into question in 2008 when she labeled Democratic presidential candidate Hillary Clinton, then running against Obama for the Democratic nomination – a “monster.” The remark prompted Power’s resignation from Obama’s campaign team.

Power also was criticized by conservatives for seeming to suggest in a 2002 interview with an academic that bringing in the U.S. Army to police the Middle East conflict might be needed if either Israel or the Palestinians move toward genocide.

Rice is one of the original members of the team that helped Obama win election in 2008, then became the first black woman appointed as U.S. ambassador to the United Nations.

She gained a reputation as a tough, often uncompromising diplomat who had no qualms about cursing behind closed doors.

Some Security Council diplomats say Rice has been overbearing, though they acknowledge that she has a good sense of humor and has been effective in getting across U.S. policies at the United Nations.

Obama has taken a cautious approach to evidence that Syria has used chemical weapons after declaring any such usage would cross a “red line.” He has also been reluctant to take steps to arm the Syrian rebels or participate in a “no-fly” zone, frustrating the Syrian opposition.

Rice appears to be of like mind. U.N. diplomats familiar with her thinking said she has been extremely wary when it comes to supporting Syria’s insurgents with weapons.

White House officials said there was nothing precipitous that prompted the shakeup now. Donilon had talked for some time about leaving his post and he was most recently in Beijing preparing the details of the Obama-Xi meetings this week. DM