NUM, AMCU, Marikana: ‘Tis the Season to be Bloody 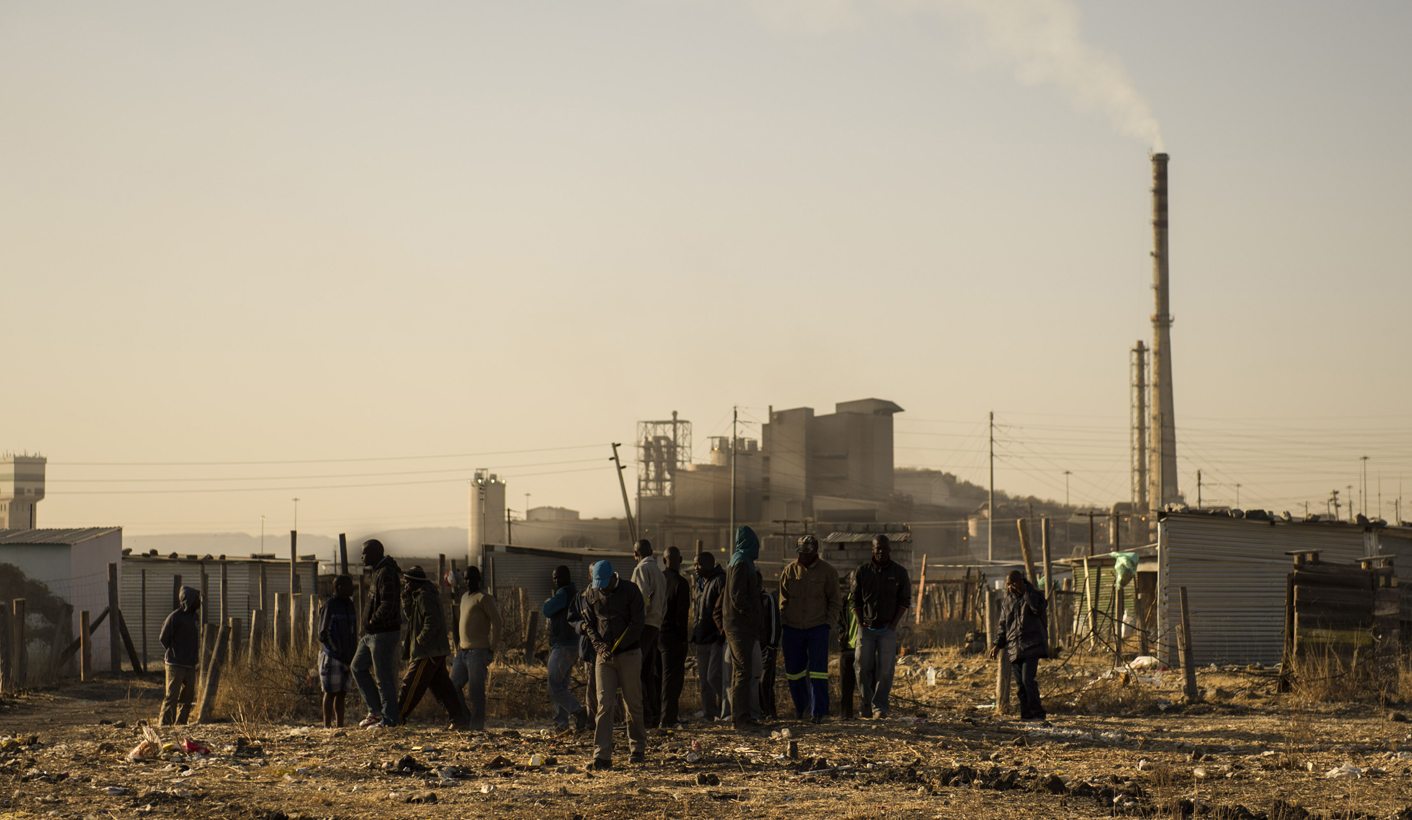 The truth is that factional violence has long been a way of life in the mining union business. And that was when there was just one power player, the NUM. Now, with two unions battling for supremacy in the Platinum Belt, the matrix of rivalries increases the possibility of violence exponentially. What makes the situation even more perilous, though, is that the current big hitter in the union stakes, AMCU, appears to have learnt nothing from the NUM’s mistakes. As wage negotiations approach organised labour needs to take a long hard look at how it goes about its business. By GREG MARINOVICH.

A National Union of Mineworkers (NUM) shop steward was shot dead and another man critically wounded at the NUM office at Lonmin’s Western Platinum mine, at Wonderkop, Marikana on Monday. (The NUM has confirmed that a shop steward was shot dead.) According to other sources, another NUM member was shot in the same incident, and was taken to a private hospital in a private vehicle, apparently to avoid his location being discovered and him possibly being attacked again.

The NUM office at the village of Wonderkop is separated from the rival Association of Mineworkers & Construction Union (AMCU) office by a satellite police station, and is across the road from the Lonmin hostel. This was the very same NUM office that was the site of the conflict that started the chain of events leading to the Marikana massacre: the striking Lonmin miners marched on the then-dominant union, the NUM, to have it present their grievances to Lonmin management. On that occasion, Saturday 11 August, 2012, they were met by people they describe as dressed in NUM T-shirts, who opened fire on the marchers, wounding at least two. The marchers further claimed to the Marikana Commission that the wounded were further attacked with sticks and knives.

Many believed that one or two of the striking miners had been killed but, in fact, all of the marchers wounded that day survived.

That march, the striking miners claimed, led them to have no choice but to arm themselves, and become more confrontational. The NUM, on the other hand, claimed that it had to defend its office, which had come under attack.

Evidence at the Farlam Commission seems to suggest that the truth lies somewhere in the middle.

Monday’s attack on the NUM office follows a campaign by both AMCU and the miners’ strike committee to have the office closed. They say that since AMCU has officially recruited 70% of the workers at Lonmin, the NUM has lost its threshold representational rights and should go.

While Lonmin tried to get the NUM to accelerate the withdrawal of its recognition rights at the mine, and to vacate its office ahead of time to avoid confrontations, the Johannesburg Labour Court ruled last week that this action had to be withdrawn.

The NUM now has until 16 July 16 to show that it has sufficient representation at Lonmin to hold onto its majority-union privileges. AMCU, with its massive majority, wants those perks and privileges to pass to it as soon as possible. The miners also want the NUM out of Lonmin, demonstrating that with a two- day stay-away in the wake of “Steve” Khululekile Steven’s assassination. Stevens was a kingpin unionist who had galvanised the Platinum Belt against the NUM.

As the NUM and AMCU head into strike season more than a little desperate to show themselves as the miners’ union of choice, they do so in an atmosphere of poisoned labour relations and deadly competition between the unions –  and between factions within unions.

In this atmosphere of violent competition, Lonmin last week suspended eight NUM officials who had tried to fraudulently boost the union’s membership numbers at the mine. This is part of a desperate attempt by the union to avoid losing even its rights to access the 28,000-strong workforce at Lonmin.

AMCU had claimed that there were some 800 fraudulent stop orders submitted by the NUM. Lonmin appears to confirm at least 200 such orders as the reason for the shop stewards’ suspension.

The NUM has told of its overt plans to again take control of the prized platinum belt, where it is losing members hand over fist. NUM president Frans Baleni told the SABC that his union was in danger of losing 60% of its members. He claims that many of the people who abandoned the NUM had done so under threats of violence and “some of those members who left are now finding their way home”.

ANC deputy president Cyril Ramaphosa, one of the NUM’s founders, told a May Day rally in Rustenburg, “We must stand firm and united and defend this union. We must declare Rustenburg alliance territory because this is the home of the ANC.”

It was a call for militancy that has been echoed by various NUM officials and, disturbingly, by cabinet ministers.

Mineral Resources Minister Susan Shabangu told a gathering of NUM shop stewards and officials last week: “We are very much aware that you are effectively under siege by forces that are determined to use every trick in the book permanently to defeat you and remove you literally from the face of the earth.

“This is being done with the ultimate goal of ensuring that no progressive trade union will be present in the mining sector that shares the same ideological orientation as the congress movement. That would be betrayal of the proud history of struggle of the NUM.

“Comrades, it is only those who are willfully blind who will not see that these forces, by extension, want to realise one major objective: ultimately to defeat and dislodge the ANC from power and reverse the gains of the national democratic revolution that we scored as a result of the democratic breakthrough of 1994.”

The Cosatu affiliate has said it will do this by using its newly announced Youth League to claw back lost turf. Following the example of the African National Congress’s militant Youth League, the NUM wants to use under-35-year-olds to seize back the initiative.

Against this backdrop of increasing militancy, the Daily Maverick has heard disturbing reports of NUM members bringing in weapons to the shafts where the union has a presence. Other rumours in Marikana speak of a well-known local taxi operator who was arrested with large amounts of cash on him, which the miners say was to be used to buy weapons. Others tell of unionists arrested with weapons on them.

One AMCU loyalist said that NUM members have been accompanying police through Nkaneng shantytown, pointing out where AMCU members live, and where they are said to be harbouring their own firearms. He further claimed that policed opened fire on him with rubber bullets on Monday, for no apparent reason.

Both sides of this union battle are clearly preparing for a struggle that is well outside legal constraints.

The killing of “Steve” also sparked a spasm of violence that saw twin brothers killed when unknown men were searching for an NUM official, hours after AMCU’s power player in the Rustenburg area was gunned down. Another key AMCU organiser narrowly avoided attackers searching for him in the middle of that same night.

Things then quietened down, but preparations have been taking place nevertheless.

Violence is a way of life in the mine union business. Many a local union election is preceded by the killing of one of more candidates from opposing power groupings. Lonmin has seen more than its fair share of unionists targeted by rivals. Insiders tell of the details of how these groupings target each other, often using the pretext of strikes and the accompanying anarchy to assassinate their rivals.

That was the situation when it was just one union dominating the scene. Now, with two unions battling for supremacy in the Platinum Belt, the matrix of rivalries increases the possibility for violence exponentially.

As the wage negotiations approach, and the NUM hierarchy struggles to convince the Chamber of Mines not to cease paying their executive-level salaries, organised labour needs to take a long hard look at how it goes about its business.

Joining a union is how the most vulnerable workers in a capitalist system protect themselves from exploitation and unfair work practices and conditions. Unions have brought great benefits and a degree of justice for blue-collar workers – those who earn their living from the sweat of their brow.

In a country like South Africa, where anywhere between 25% and 40% of adults (depending on which stats you prefer) are without substantive work, employers could (and often do) ride roughshod over workers’ rights and demands were it not for our strong unions and labour-friendly laws.

Yet, somewhere along the line, the unions have become corrupted, both financially and morally. A little while ago, Daily Maverick carried a story about how the mining houses, which were paying the inflated salaries of elected union office bearers at all levels, were about to end the practice. The union heavyweight, NUM, defended being paid by the bosses while working for the workers by saying that it was common practice across all unions, and named various other unions within the Cosatu federation which had similar sweetheart deals. In reality, while all the unions, including Solidarity, Uasa and AMCU, are or were in on the deal, NUM officials are the greatest beneficiaries of the “arrangement”.

As we approach a calendar year since the start of the unhappiness of Lonmin miners with their employer and the then-dominant union at Lonmin’s Marikana, it seems that AMCU has learned little from the NUM’s mistakes. It has successfully lobbied Lonmin to agree to a 35% threshold for basic rights and 45% to be allowed the right to collective bargaining. At the current 70% level of support for AMCU, workers who choose to pay dues to the NUM will not be represented at the workplace in any way.

It seems unlikely that the workers have forgotten the roots of the Marikana strike and yet here AMCU is, pushing for a similarly exclusive deal that again lays the foundation for conflict. AMCU wants a union to have 35% of employees as paid up members before it union can even enter the workplace for recruiting or organising.

Labour lawyer and mediation expert John Brand of Bowman Gilfillan declares the threshold deals the NUM had and which AMCU now wants as counterproductive.

“Imagine a farm, where you have to first recruit 35% of farm labourers before you can set foot on the farm to recruit?”

Brand says that organisational rights are meant to encourage unionisation. “It is in everyone’s best interest to have a union represent a miner in a disciplinary hearing or other matter.

“A threshold should only be relevant in collective bargaining because the results apply to everybody and there democracy must rule. This distinction is not understood in the lay world, and neither in our laws.”

Brand suggests that the way in which successful countries deal with conflict or dispute is through arbitration and mediation as opposed to power.