Vincent and Bruno got married, the first in France 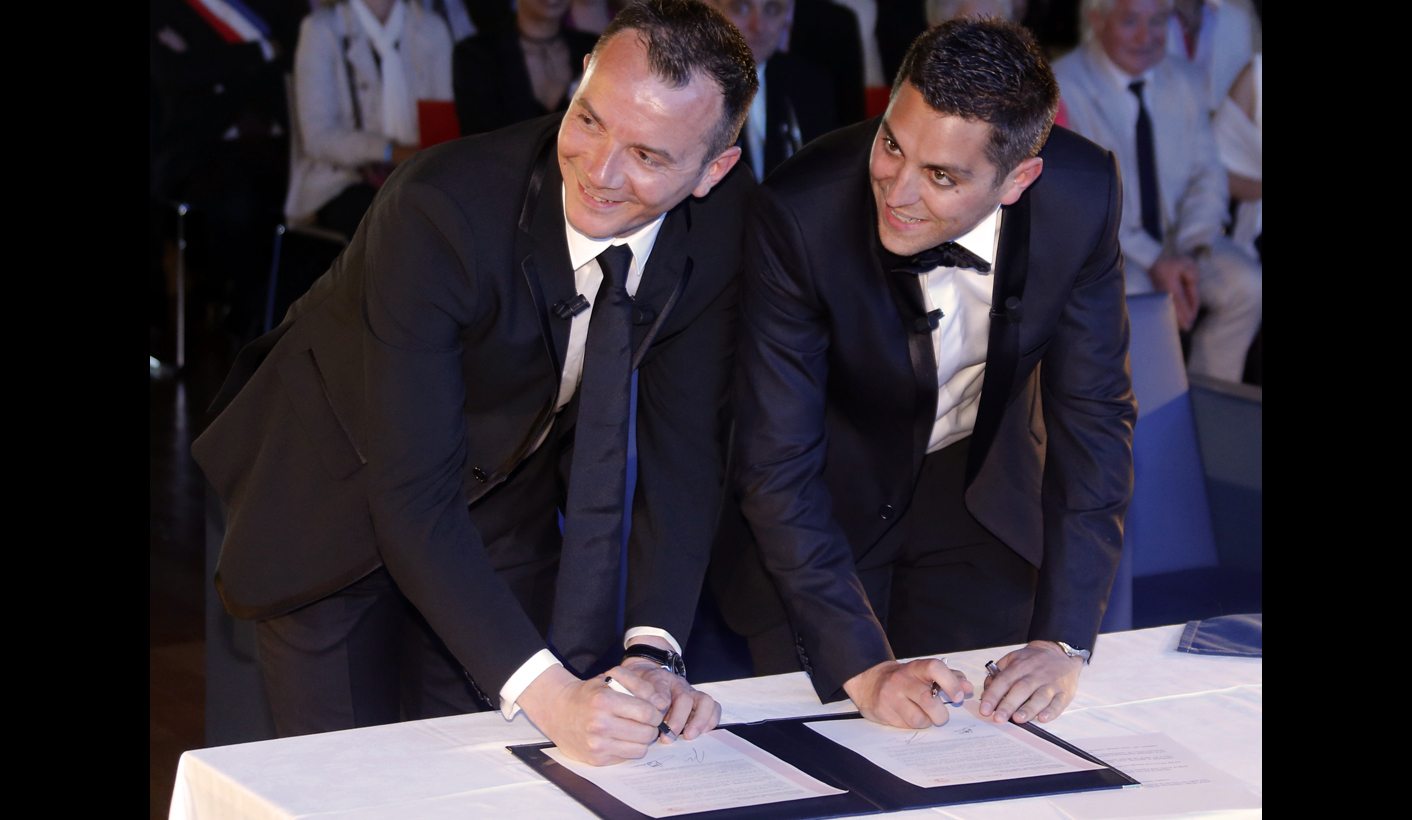 Not even France's biggest street protests in years - or a smoke bomb lobbed toward the city hall - could stop Vincent and Bruno getting married. By Catherine Bremer.

The first gay couple to wed since France became the 14th country to permit same-sex marriage, Vincent Autin, 40, and Bruno Boileau, 29, exchanged vows and rings on Wednesday to cheers and applause at a city hall ringed by riot police.

“I pronounce you joined in matrimony in the name of the law,” said Helene Mandroux, mayor of the southern of city of Montpellier, which styles itself France’s most “gay-friendly”.

The two men, in matching tuxedos, embraced to Frank Sinatra singing “Love and Marriage” and spoke of how it would help them start a family – new legal rights that hundreds of thousands protested against, some violently, right up until this week.

“Love each other, love us, love one another, because it’s important,” said gay rights activist Autin, choking with emotion and adding that the couple hoped now to apply to adopt a child.

“This protects the family we want to build.”

Minutes earlier, as the pair had prepared to make their entrance in front of 500 invited guests, journalists and well-wishers inside the futuristic, blue-glass city hall, someone had tossed a smoke bomb into the building’s grounds.

The law granting gay men and lesbians equality in marriage and adoption has been among the most divisive of President Francois Hollande’s first year in office, tapping a groundswell of liberal opinion in predominantly Roman Catholic France but enraging traditionalists, the far-right and many churchgoers.

Mayor Mandroux, from Hollande’s Socialist party, scrapped plans for the ceremony to be shown on a giant TV screen outside city hall, fearing trouble of the kind seen at the last protest march in Paris on Sunday that drew hundreds of thousands.

It was broadcast instead online and in the end the dozens of riot police who ringed the building had little to do. Leading opponents of the marriage law had called publicly for restraint.

After the couple and their guests had gone, an anonymous bomb threat called in to the authorities prompted police to evacuate the building, but no device was found.

“We’re rather relieved it’s all over,” Boileau told reporters after waving to a whistling crowd of well-wishers, some dressed in drag as carnival nuns, from a city hall balcony – an experience he said gave him goosebumps.

Boileau’s tearful mother Dominique, dressed in a short white dress and coral jacket, said: “I cried when Hollande passed the law and I am still crying. I am proud of them.”

“It’s a fantastic day for us, for our generation and for the kids that will have proper homes because of this,” said student Lucile Dampierre, 24, a lesbian activist among the crowd.

The happy couple, who have been together since they hit it off six years ago discussing music in an online forum, planned a private wedding party and then some quiet time together.

Since Autin proposed in September – in a public occasion with city hall officials – protest rallies partly fuelled by anger with Hollande over other issues like the economy appear to have eroded support for the gay marriage law; it now stands at 53 percent, with 47 percent opposed, reflecting deep division, particularly over the adoption rights it includes.

On Wednesday, the interior minister said there had been a rise in threatening behaviour against gay people and said France may well toughen penalties for homophobic acts and speech.

Last week, one opponent of gay marriage shot himself dead at the altar of Paris’s Notre Dame cathedral and there was some violence during Sunday’s anti-gay marriage march in the capital.

That evening, the jury at the Cannes Film Festival, along France’s Mediterranean coast from Montpellier, handed top prize to an explicit, taboo-shattering love story between two women. DM

Photo: Vincent Autin (L) and Bruno Boileau sign the register as they are married at the town hall in Montpellier May 29, 2013. The two men are the first same-sex couple to marry in France under a reform which has stoked some of the ugliest protests in the country in decades. The law, backed by most French and feted by gay and lesbians as it came into force this month, makes France the 14th country to allow same-sex marriage despite heated street protests by conservatives, Catholics and extreme-right groups. REUTERS/Jean-Paul Pelissier