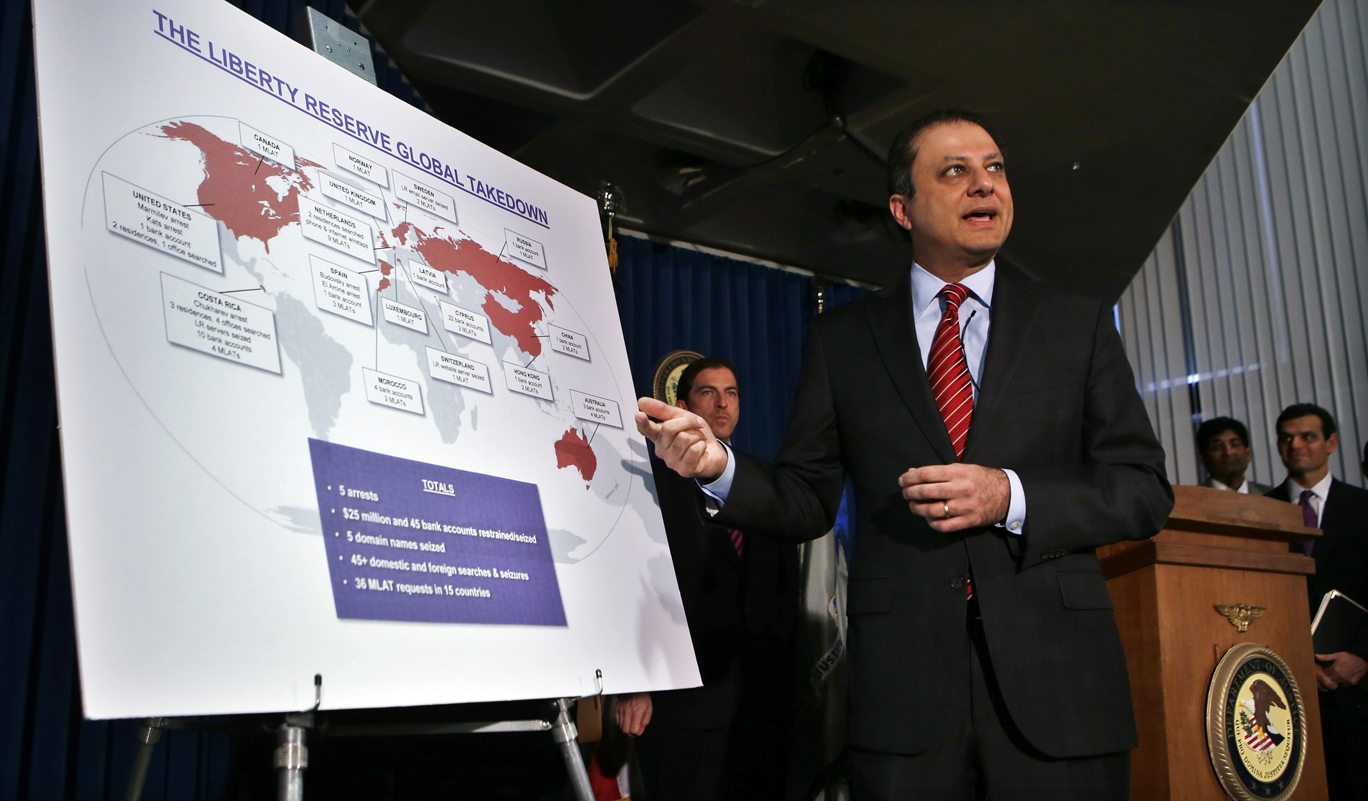 U.S. prosecutors have filed an indictment against the operators of digital currency exchange Liberty Reserve, accusing the Costa Rica-based company of helping criminals around the world launder more than $6 billion in illicit funds linked to everything from child pornography to software for hacking into banks. By Emily Flitter.

The indictment unsealed on Tuesday said Liberty Reserve had more than a million users worldwide, including at least 200,000 in the United States, and virtually all of its business was related to suspected criminal activity.

“Liberty Reserve has emerged as one of the principal means by which cyber-criminals around the world distribute, store and launder the proceeds of their illegal activity,” according to the indictment filed in U.S. District Court for the Southern District of New York.

The indictment detailed a system of payments that allowed users to open accounts under false names with blatant monikers like “Russia Hackers” and “Hacker Account.”

The use of digital currency has expanded over the past decade, attracting users ranging from video gamers looking for ways to buy and sell virtual goods to those who lack faith in the traditional banking system.

Touted by some investors as the future of money, these virtual currencies have gained the attention of U.S. regulators looking to bring them under anti-money laundering rules.

The U.S. Treasury said on Tuesday it named Liberty Reserve under the USA Patriot Act as “specifically designed and frequently used to facilitate money laundering in cyber space.”

That designation, a first against a virtual currency exchange, prohibits banks or other payment processors from doing business with Liberty Reserve, even under a new name.

Liberty Reserve, with around 12 million transactions per year, laundered over $6 billion in criminal proceeds since it began operating in 2006, the indictment said.

A ring of hackers who recently stole $45 million from two Middle Eastern banks, by hacking prepaid debit cards, used Liberty Reserve to distribute their take, according to court papers.

Tech blogger Brian Krebs, a former Washington Post reporter who now runs the blog Krebs On Security, wrote on Tuesday “the action against Liberty Reserve is part of a larger effort by the U.S. government to put pressure on virtual currencies.”

Treasury Undersecretary for Terrorism and Financial Intelligence David S. Cohen told a press conference it was a response to a specific abuse of the financial system. “I want to make clear that today’s action does not mean that we are trying to eliminate virtual currencies and their providers,” he said.

On Tuesday, the company’s website, www.libertyreserve.com, displayed the message: “This domain name has been seized by the United States Global Illicit Financial Team.”

In addition to Budovsky, who was arrested in Spain along with his deputy, Azzedine El Amine, co-founder Vladimir Kats was arrested in Brooklyn, New York. Two technology designers, Maxim Chukarev and Mark Marmilev, were also arrested, Chukarev in Costa Rica and Marmilev in New York.

Two more company employees were still at large in Costa Rica according to officials: Ahmed Yassine Abdelghani and Allan Esteban Hidalgo Jimenez. According to the indictment, almost all of the men used the alias, Eric Paltz.

None of the men could be reached for comment.

Investigative police in Costa Rica said that along with computers and files, six cars were seized from Budovsky’s house in the wealthy suburb of Escazu: three Rolls Royce, two Jaguars and one Mercedes Benz.

Liberty Reserve’s currency unit was called the “LR.” Users opened accounts at Liberty Reserve giving only a name, address and date of birth that the company made no attempt to verify, according to the indictment.

Once a user had a Liberty Reserve account, he or she could use cash to purchase LRs from third-party exchange merchants, separate companies trading LRs with each other in bulk and charging fees to make the conversions between LRs and hard cash.

Liberty Reserve users could transfer the digital currency units to each other, to be redeemed in different parts of the world for cash using the exchange merchants.

According to information from Liberty Reserve’s archived web pages, the company had relationships at one time with at least 35 different exchange companies, some of which transferred cash back and forth to customers using PayPal, Western Union , MoneyGram, credit cards including Visa, Mastercard, American Express, and CitiBank Global Money Transfer.

PayPal said it has not allowed payments to be processed for Liberty Reserve for the last five years. Spokesmen for Western Union, MoneyGram, Visa, Mastercard and Citigroup did not respond to requests for comment. A spokeswoman for American Express said American Express sold Amex Bank to Standard Chartered in 2007.

The indictment said Liberty Reserve did not collect any banking or transaction information from the third-party exchange companies. It also let its users hide their Liberty Exchange account numbers when making transactions.

The Costa Rican prosecutor’s office said Liberty Reserve had been operating illegally in Costa Rica since 2006. Budovsky, a Ukranian-born former American citizen, had already pleaded guilty to U.S. charges that he operated an illegal financial services firm out of New York. Officials said they suspected that Liberty Reserve relocated to Costa Rica from the United States after U.S. authorities began looking into its operations.

Tokyo-based Mt. Gox, a top exchange for Bitcoin, the best known virtual currency, failed to register with FinCEN earlier this month and had its U.S. dollar accounts seized by authorities.

Over the past week, a Bitcoin unit has traded at around $130, according to the website Bitcoincharts.com. DM

Photo: Preet Bharara, United States Attorney for the Southern District of New York, describes charges against Costa Rica-based Liberty Reserve, one of the worlds largest digital currency companies and seven of it’s principals and employees for allegedly running a $6 billion money laundering scheme at a news conference in New York, May 28, 2013. According to the indictment “Liberty Reserve has emerged as one of the principal means by which cyber-criminals around the world distribute, store and launder the proceeds of their illegal activity”. REUTERS/Mike Segar