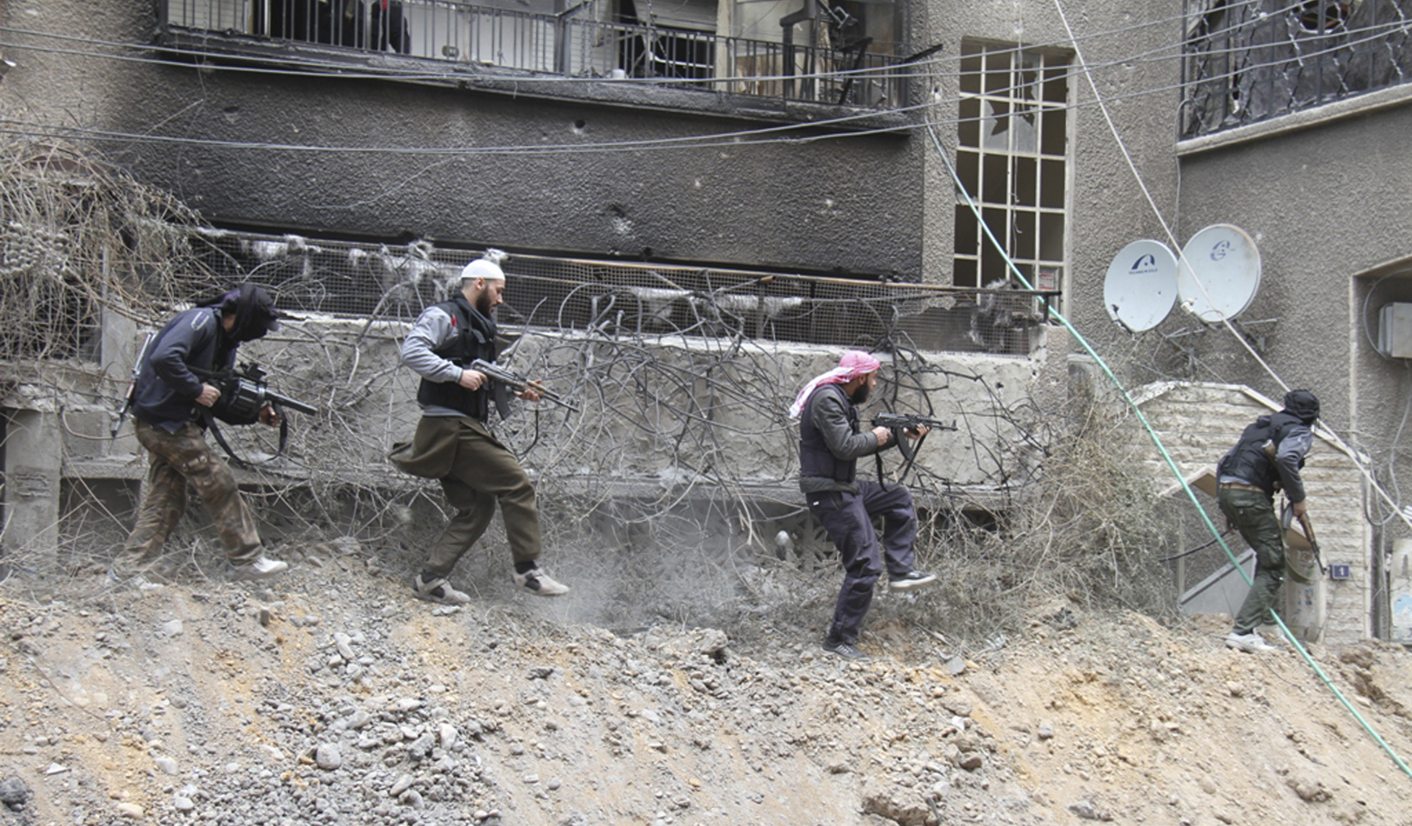 Disputes between Russia and the West over arming warring sides in Syria on Tuesday dimmed prospects for peace talks that were also clouded by disarray among President Bashar al-Assad's political foes. By Alissa de Carbonnel.

As Western nations debate what action, if any, they should take on Syria, Assad’s main allies – Russia, Iran and Lebanon’s Shi’ite Hezbollah group – have been closing ranks behind him.

Russia, which has protected Assad diplomatically since the Syrian uprising erupted in March 2011, said it would deliver an advanced S-300 air defence system to Damascus despite U.S., French and Israeli objections, arguing that it would help deter “hotheads” intent on intervention in the conflict.

Moscow also accused the European Union of “throwing fuel on the fire” and “undermining” the chances of holding a peace conference at Geneva by letting an arms embargo on Syria expire.

France and Britain, the EU’s strongest military powers and most ardent advocates of scrapping the embargo, said they had not yet decided to arm Syrian rebels, but wanted to put Assad under pressure to negotiate.

“Our focus in the coming weeks is the Geneva conference,” said British Foreign Secretary William Hague. “What this is doing is sending that signal loud and clear to the regime and … being very clear about the flexibility that we have if it refuses to negotiate.”

“We think this delivery is a stabilising factor and that such steps in many ways restrain some hotheads,” he said.

The S-300s can intercept manned aircraft and guided missiles and their delivery could improve Assad’s chances of retaining power. Western nations criticise such arms deliveries in much the same terms as Moscow assails weapons supplies to rebels.

Israel’s defence minister said the air defence missiles had not yet left Russia, but hinted at military action if they were delivered: “I hope they will not leave, and if, God forbid, they reach Syria, we will know what to do,” Moshe Yaalon said.

Despite their differences, the United States and Russia are trying to convene an international conference next month to end a 26-month-old conflict that has killed more than 80,000 people and threatens to ignite wider Middle Eastern confrontations.

But the opposing sides remain far apart on whether Assad should play any role in any political transition – and the main Western-backed opposition has not even said if it will attend.

Diplomats in Geneva said a meeting could be held at the U.N. there on June 15-16 just before the U.S., Russian and EU leaders meet at a Group of Eight summit in Northern Ireland on June 17.

“CHASE THEM TO HELL”

Fighting in Syria has intensified on several fronts in recent weeks and is spilling dangerously into Lebanon, whose Hezbollah guerrillas now openly fight alongside Assad’s forces.

In a weekend speech, Hezbollah leader Hassan Nasrallah promised victory for his Iranian-backed group, saying the battle in Syria was vital for its primary struggle against Israel.

On the ever more volatile Lebanese-Syrian border, gunmen killed three Lebanese soldiers at a checkpoint in the Bekaa Valley before fleeing toward Syria, Lebanese officials said.

Hours earlier a rocket fired into the mainly Shi’ite town of Hermel in the Bekaa killed a woman and wounded two people.

A Syrian rebel leader threatened reprisals against Hezbollah unless the Arab League and the United Nations acted within 24 hours to halt the militant group’s intervention in Syria.

“We will chase them all the way to hell if a decision is not taken to stop Hezbollah’s attack on Syrian land,” Brigadier-General Salem Idris told Al-Arabiya television channel.

Idris, a defector from Assad’s military, is a favoured channel for Western aid to rebels, although his control over diverse armed factions is thought to be limited.

Violence in Syria is gradually spreading to Lebanon, raising fears for the fate of a small nation that lost anywhere between 100,000 and 150,000 dead in its own 1975-90 civil war.

Syria’s civil war has divided Lebanon, with most Lebanese Shi’ites supporting Assad, whose minority Alawite sect is rooted in Shi’ite Islam. Many Lebanese Sunnis back the mostly Sunni Syrian rebels, putting the Lebanese army under extra pressure to keep a lid on sectarian tensions.

Assad’s government, whose forces have been staging fierce offensives on rebel strongholds around Damascus and the border town of Qusair, has named representatives for the peace talks Washington and Moscow hope to convene in Geneva in June.

But opposition political factions, not to mention the rebel combatants over whom they wield scant control, remain riven by internal divisions even after six days of talks in Istanbul.

The 60-member Syrian National Coalition has failed to agree to include more liberals in its ranks to the dismay of Western and some Arab backers keen to reduce the influence of Islamists.

The disarray raises questions about the opposition’s ability to agree any sort of inclusive transitional government and could strengthen Assad’s hand before any peace talks.

Western and Arab envoys sought to break the opposition deadlock which could even scupper the U.S.-Russian initiative.

“Effectively, without an opposition overhaul there will not be a Geneva,” a frustrated regional official in Istanbul said. DM