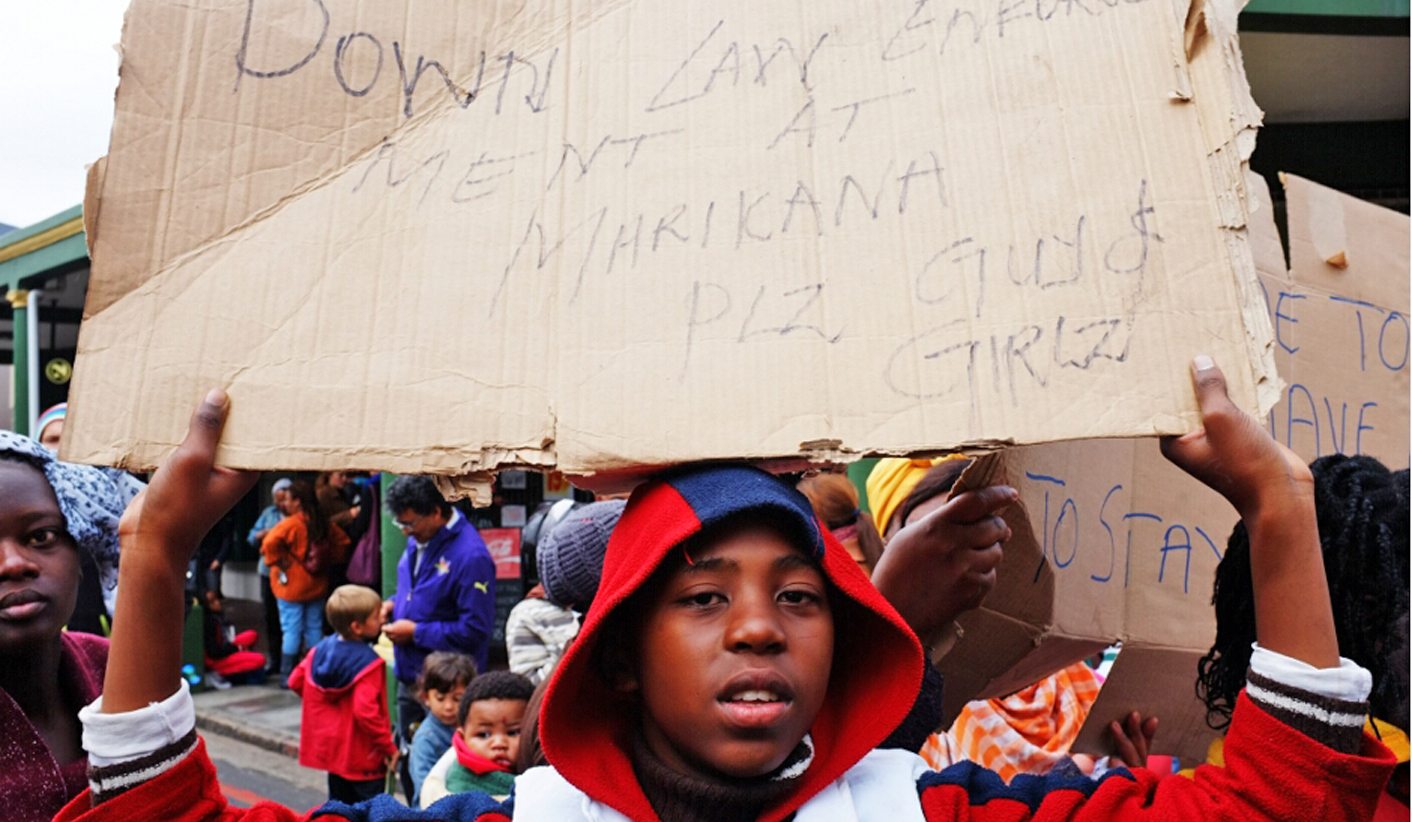 Lower Main Rd in Observatory (Cape Town) was carefree and festive on this past Saturday. Motor vehicles were replaced with pedestrians, cyclists, rollerbladers, rollerskaters, skateboarders, salsa dancers, martial artists, musicians, artists and more. But not everyone was there to take advantage of the “opened streets”. A group of residents from the Marikana settlement in Philippi East had come to protest against the ongoing illegal evictions that they have been facing since Freedom Day. By BARRY CHRISTIANSON.

The protestors might have chosen the wrong platform to be taken seriously, though. In the midst of party-driven Observatory – the capital of Cape Town’s hippies, artists and students – the protestors hardly attracted a second glance and when they did, it was misunderstood. One Instagram user thought the protest was an “art installation” and the Observatory Improvement District (OBSID) referred to it as the “Marikana play”.

The vibrant songs they were singing seemed to make them fit right in with the crowds, and the general feeling towards the protesters seemed to be one of acceptance – with some passersby showing their support with monetary donations.

Unfortunately, OBSID security patrols were not as accepting.

One observer noted, “They told them that they were there illegally and the people in the shops and their customers didn’t want their kind around.” There “was a period of indecision, when the protesters pulled me into their dance and [OBSID] stood there watching. Then [OBSID] went off and after a while came back and said that they had to move their shack backwards because they were in the way.”

The traffic police requested that four metres be kept clear for emergency vehicles. This was ostensibly the rule that the protesters were violating. When OBSID was asked about the massive AfrikaBurn Dinosaur, which would also act as an obstruction to emergency vehicles (since it took up nearly the entire width of the road), they only replied that “there was a slight challenge in terms of space to move down the road”.

It was a bitter pill for the protestors, and flew in the face of the Open Streets principle. As it’s put in a press statement by Abahlali baseMarikana,

“Open Streets aims to promote use of roads and public space for people and without cars. They are encouraging bicycle use, roller skating, etc. But we think that Open Streets should mean more than that. We think we need an open city that is open to the poor, that provides the poor with
land and housing. We therefore are coming to disrupt the exclusion of Open Streets to tell everyone of the Closed City we live in.”

It goes on to say:

“The City of Cape Town, which supports Open Streets, does not support an Open City. We, the poor, are excluded. Our homes are destroyed by the Anti-Land Invasion Unit, we are evicted from empty public land that is meant to be shared with us, we are beaten by the police that protect the rich and we are left without a roof over our heads.”

According to the statement, the protestors had specifically felt the need to reclaim some of the spaces they felt excluded from. “Our protest today is to claim the city,” the press statement said. “This is why, today, we are moving our Marikana settlement to the streets of Observatory, so the privileged classes participating in Open Streets can see how we are forced to live by the government that they support.

“There can only be really open streets if the city is open too.”

How much the “privileged” referred to in the statement actually saw and took in, however, is another matter. Amidst the revelry, the Marikana shack – already moved – was dwarfed by Lizzy, the huge AfrikaBurn dinosaur.

OBSID made no requests for the latter to move, and the party went on – a poignant illustration of outsiders’ invisible plight in the suburbs that elude them. DM

All photos courtesy of thesestreets.co.za