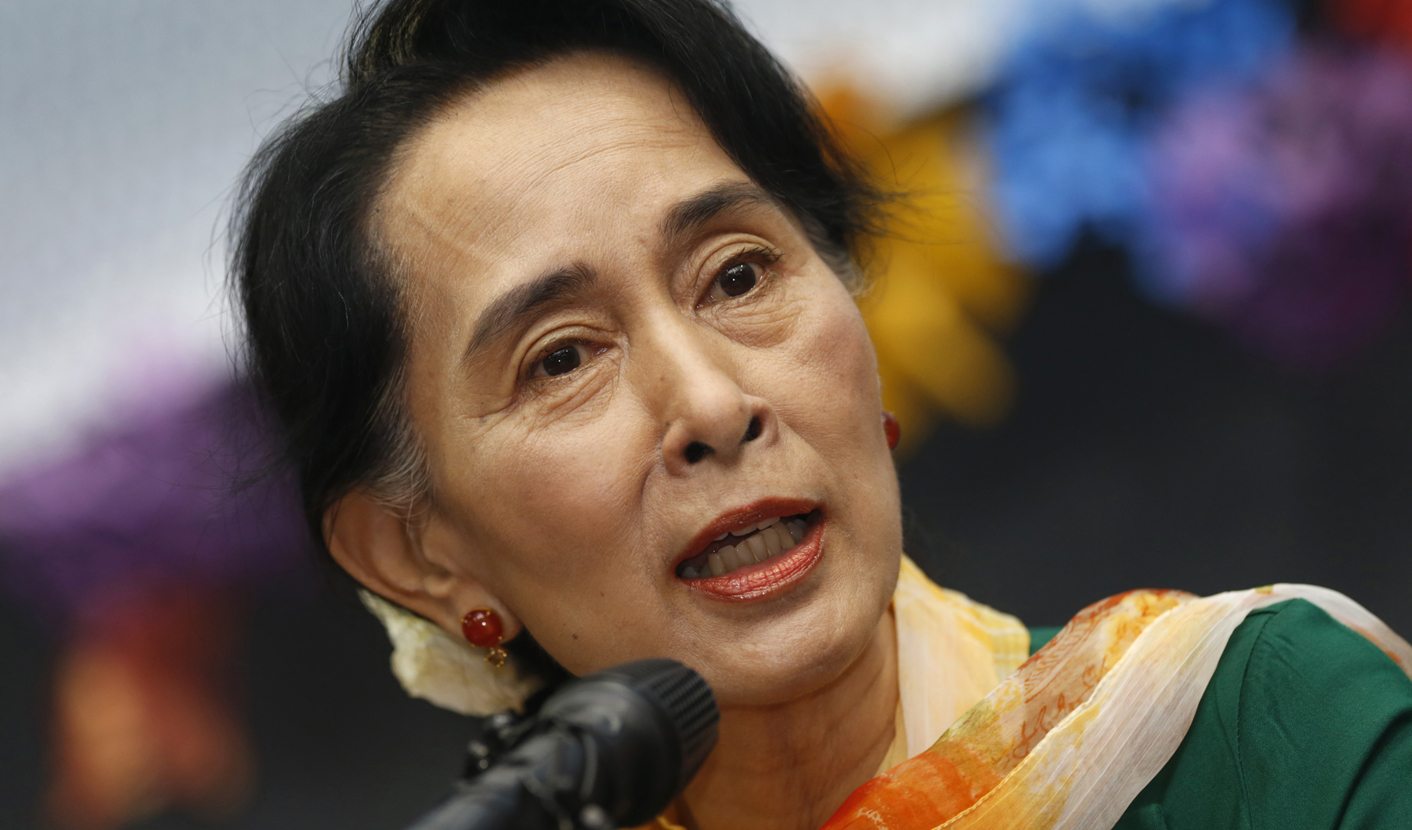 Being a modern saint is a tough business, as Aung San Suu Kyi is finding out. With the weight of expectation so high, she can’t help but leave some people disappointed as she makes the compromises and trade-offs necessary to succeed as an active politician. This may or may not be a good thing for her country, but either way – her halo is slipping. By SIMON ALLISON.

When in Yangon last year, I did what every visitor with an ounce of political consciousness does and visited the house of Aung San Suu Kyi. It’s a fairly grand lakeside villa in an area full of them, hers obvious by the thick security fencing and the soldiers in the guardhouse. It was here that the Lady, as she is known with affection, spent 15 years in house arrest at various times during the course of her career as the most powerful opponent of Myanmar’s military regime.

Sometimes journalism requires the suspension of good manners, so I chanced my luck and knocked on the gatehouse door. “Is the Lady here?” I asked, intending to request an interview. But Suu Kyi wasn’t in town at all. She was three hours north of Yangon, in a strange and eerie place called Naypyidaw – the new capital city built in the middle of nowhere by the military regime, an urban fortress from which to protect their power, complete with tank-friendly boulevards and four pristine golf courses to keep the generals entertained.

In Naypyidaw, in the heart of the military regime, is where Suu Kyi now maintains another house. She doesn’t have a choice. She’s a member of parliament now, and parliament meets in the capital. Even though she’s been an active part of Myanmar’s government for over a year now, this fact is no less remarkable – a testament to her incredible perseverance and willpower, and also a credit to the tentative reform process launched by President Thein Sein.

Under Thein Sein’s reforms, Suu Kyi’s National League for Democracy (NLD) was allowed to participate in parliamentary by-elections, winning every seat it contested; some restrictions on free press have been lifted; and there is a palpable relaxation of the “climate of fear” with which the military for so long consolidated its power, with political gatherings permitted and people much more willing to share their opinions, even if critical of the government. It’s not much, but it’s a start, and has been accompanied by a rapid normalisation in relations between Myanmar and the outside world, which culminated last week in Thein Sein’s meeting with Barack Obama in Washington.

But veteran Myanmar-watchers are concerned that the new-look junta is being welcomed in from the cold a little too quickly, and that Thein Sein’s lauded reforms are just window-dressing to disguise the fact that the military is still firmly in control. There are also doubts about whether Thein Sein – a military man himself – can control his senior officers, doubts apparently confirmed by reports that the civil war against Kachin insurgents was instigated by a renegade commander.

This is all to be expected. Transitions to democracy are always fraught with mixed loyalties and compromise; the passage of reform is never straightforward. In Myanmar, however, at least we know there’s someone who can guide the country through this maze. This is, of course, the Lady herself: Nobel laureate, prisoner of conscience, democracy activist and full-time member of the modern pantheon along with Nelson Mandela and the Dalai Lama. If anyone’s going to lead Myanmar to the promised land – if anyone deserves to lead Myanmar to the promised land – it will be Aung San Suu Kyi.

Except the Lady is no saint. She’s a politician, and politics is ultimately the art of making trade-offs. Hers is to cooperate with the regime that jailed her for 15 years and kept her away from her dying husband and two children. Hers is to buy a house in Naypyidaw, the regime’s manufactured capital, and participate in the flawed legislative mechanism which it created (25% of seats in parliament go automatically to military representatives).

But she’s got her eyes on the prize, which is ultimately the presidency – a position from which she will really be able to lead Myanmar’s reform. “I know that many, many press people are surprised when I quite frankly say ‘yes I want to be president’,” she said in a recent press conference.

Such concrete ambition can seem out of character with her gentle international image.Then again, we don’t really know much about her. “Being denied a public voice for so long, Aung San Suu Kyi’s views on many important issues were unknown,” writes Dr Andrew Selth, a Myanmar expert with Griffith University. “Even when able to speak publicly, she tended to express herself in terms of broad democratic principles and Buddhist moral precepts. This may have reflected her party’s lack of a detailed and agreed policy platform, but it encouraged her supporters, both inside Burma and outside it, to project onto her all their hopes and dreams. Even by some experienced observers, she came to be seen as the answer to all of Burma’s complex problems.”

There is one problem, however, which she is refusing to answer – and her silence is taking a bit of the shine off that Nobel Peace Prize medal. Here’s the situation according to two other Nobel Peace Prize laureates:

“Even as we applaud and rejoice in the new freedoms enjoyed by the Myanmar people, the country’s newly elected government must face this challenge as they evolve from autocratic rule into a democratic state. The tragedy of the Rohingya people, continuing to unfold in Rakhine State in the country’s western corner, on the border of Bangladesh, will be its proving ground,” wrote José Ramos-Horta and Muhammad Yunus.

The Rohingya are a sizeable Muslim community near the border with Bangladesh. Despite living in Myanmar for generations, they have been denied citizenship there and have faced constant discrimination. Last year, this boiled over into outright persecution, with more than 1,000 people being killed in targeted attacks in which state security forces were at the very least complicit. An estimated 125,000 people were displaced and forced into squalid conditions in internal refugee camps, where they remain today. It is, says Human Rights Watch, a “campaign of ethnic cleansing”.

And yet, throughout the worst of it, Suu Kyi kept conspicuously quiet. “A government must in the end be judged by how it protects the most vulnerable people in its midst, and its generosity towards the weakest and most powerless. Let not the good work of this government be clouded by the continuing persecution of the Rohingya people,” wrote Ramos-Horta and Yunus, who diplomatically avoided criticising Suu Kyi directly.

Others have been less diplomatic. “Aung San Suu Kyi’s reticence and refusal to condemn attacks on the Rohingya in Myanmar has dimmed the Nobel laureate’s reputation among global rights campaigners who feel she should use her moral authority to step up and condemn the Burmese government,” said Azeez Ibrahim, a fellow at the Institute for Social Policy and Understanding. “It is hard to see that the people of Burma will maintain respect and admiration for a leader who has championed the rule of law yet failed to speak out against anti-Islamic prejudice and violence.”

But that’s just the thing. In case you’ve forgotten, there’s an election coming up in 2015 – and it is an election that Suu Kyi is desperate to win. And foreigner-bashing holds a near-universal electoral appeal. It’s hard not to draw the obvious conclusion – for the moment, Suu Kyi thinks it is in her best interests (and in Myanmar’s best long-term interest) to keep quiet. Maybe she is also – quite understandably – nervous of upsetting the military and possibly undoing all the delicate reforms made recently.

There is an even more obvious conclusion, although this doesn’t square at all with what we think we know about the Nobel laureate – that she supports the regime’s attack on the Rohingya. Then again, as Dr Selth observed, we don’t really know her at all.

Mindful perhaps of the damage her silence on the Rohingya is doing to her international reputation, Suu Kyi finally said something on Monday, criticising a breathtakingly racist law that limits Rohingya families to just two children each. The law has actually been in force since 1994, but authorities have just begun to implement it again, claiming that a high birth rate among Rohingya families is increasing ethnic tension. “It is not good to have such discrimination. And it is not in line with human rights either,” said Suu Kyi – hardly a damning condemnation. She didn’t extend her criticism to anything concerning the Rohingya deaths or displacement, and the involvement of the government of which she is now a part.

She probably has her reasons for this. And, given her past record, it’s tempting to give her the benefit of the doubt – she has played the long game all her life. It’s important, however, that we recognise that she is no longer a political prisoner, but a politician – and start looking beyond her halo. DM