Analysis: In protecting Kenyatta and Ruto, the AU betrays us all 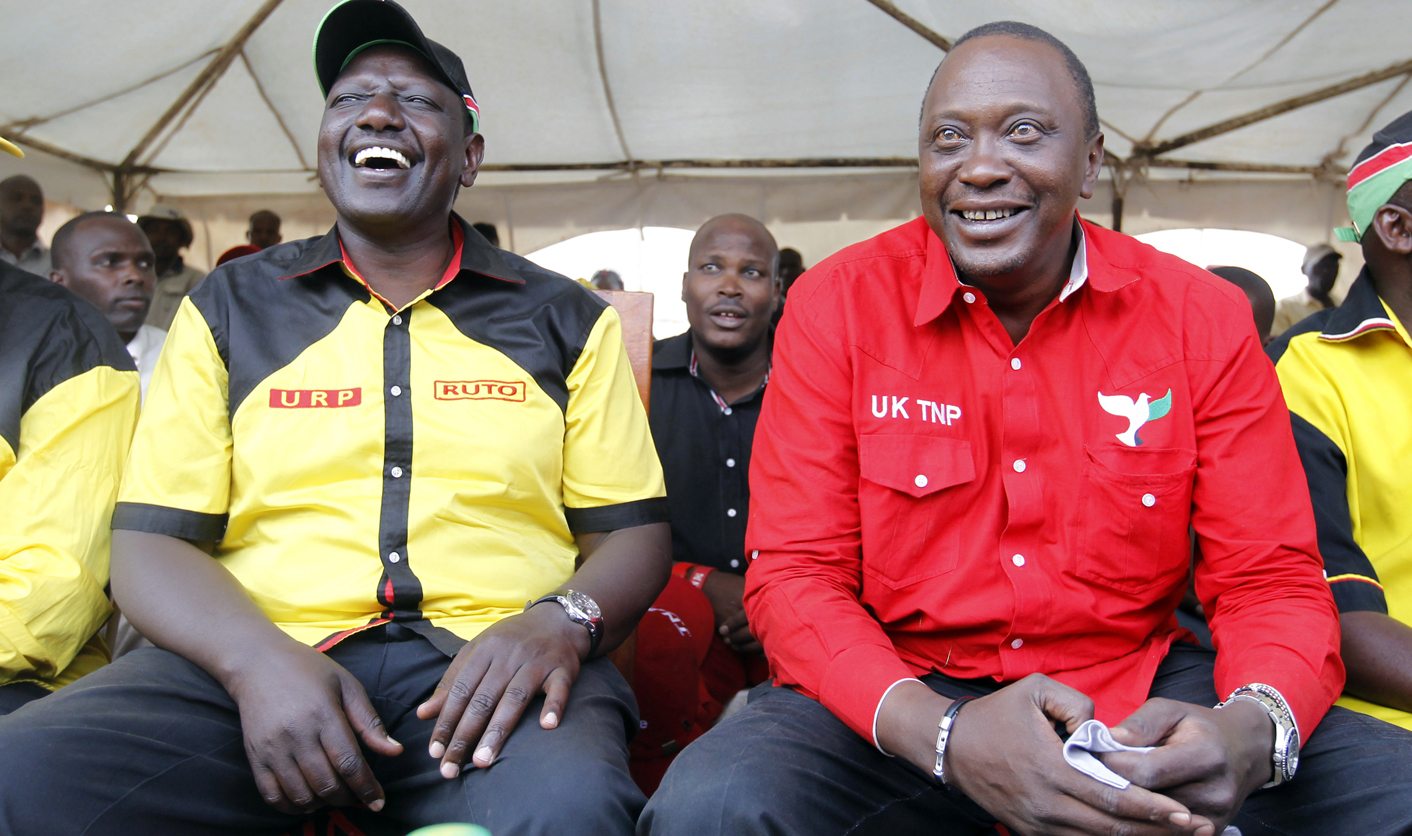 African leaders aren’t interested in justice. They’re interested in immunity. Forget that lofty talk of victimisation and pan-African solidarity; in voting to protect Uhuru Kenyatta and William Ruto against the ICC, Africa’s presidents and heads of state are just protecting themselves – a protection that does not extend to the rest of us. By SIMON ALLISON.

Africa’s presidents and head of states met in Addis Ababa this weekend for the 21st Summit of African Union, and to mark five decades of continental organisation. The African Union Commission, led by Nkosazana Dlamini-Zuma, had organised all kinds of festivities and celebrations to commemorate the milestone.

There are good reasons to celebrate. Slowly, at times imperceptibly, the African Union has evolved into a serious institution that takes a lead role in the continent’s affairs. Lots of money (much of it Muammar Gaddafi’s, although we all like to forget this) and hard work has gone into building up the organisation’s credibility and legitimacy, and this is showing in the range of responsibilities which both African nations and the international community are entrusting to the AU, from major peacekeeping operations to election monitoring to high-level policy formulation.

It’s a pity, then, that our leaders have decided to blow most of this credibility in a disgraceful show of support for two men accused (with good reason) of committing crimes against humanity.

The two men are, of course, Uhuru Kenyatta and William Ruto – the president and deputy president of Kenya, respectively. They were identified, along with four others, as the major organisers and funders of the post-election violence in 2007/2008 which killed more than 1,300 people and left Kenya in political limbo from which it has yet to recover. At the time, neither Kenyatta nor Ruto occupied the lofty positions they do now, and they were actually fighting on different sides of the conflict. Their successful electoral alliance this year is further proof, if any was needed, that the post-election violence was motivated by political expediency at its most callous and brazen.

Kenyatta and Ruto’s roles in the post-election violence were confirmed by an independent Kenyan investigation led by Kenyan Judge Philip Waki. Despite being given nearly 18 months to do so, Kenyan authorities declined to initiate any proceedings against the alleged perpetrators of the violence. Eventually, running out of patience, special envoy Kofi Annan handed over a list of six suspects’ names to the International Criminal Court (ICC) – a body which can only prosecute when national authorities are unable or unwilling to do so.

The ICC has a tricky relationship with Africa. All its prosecutions are centred on African countries, and almost all accused are black African men. It doesn’t look good – in fact, it’s a PR disaster, one that was amplified by the limelight-loving approach of former chief prosecutor Luis Morenio Ocampo, who seemed to delight in making enemies on the continent.

But there are many reasons for this perceived biased against Africa (which I deal with in depth  here). Ultimately, however, the biggest reason was the enthusiastic reception of the ICC by African countries, who signed up to it with alacrity and have not been shy to use it.

Uganda, for example, in 2003 requested that the ICC look into crimes committed by Joseph Kony and the Lord’s Resistance Army in Northern Uganda. Cote D’Ivoire’s new government – although the country is not a signatory to the Rome Statute which governs the ICC – wrote expressing its “honour” in accepting the court’s jurisdiction over war crimes committed during the 2011 civil war. Mali’s government in 2012 asked the court to investigate “the most serious crimes… where it is impossible for Malian jurisdictions to judge the culprits”.

Current ICC Chief Prosecutor Fatou Bensouda says that of the seven African cases currently before the court, five were referred to them by the African government involved – including the Kenyan case. Whether African leaders want to acknowledge it or not, they invited the ICC into Africa with a singular enthusiasm that has been matched nowhere else in the world.

They’re not so enthusiastic any more.

Taking the lead in the attack against the ICC at this weekend’s AU summit was Uganda, which proposed a resolution calling for the ICC’s Kenyan cases to be “terminated” and prosecuted instead at a local level – in other words, to put the Kenyan judiciary in charge once again of delivering justice for the post-election violence. Ugandan President Yoweri Museveni also warned that the ICC was planning to detain Kenyatta when he arrived for trial at The Hague – a staggering but baseless claim, unless you believe Museveni’s mysterious, unnamed sources.

Supporting the Ugandan position was South Sudan and, of course, Kenya, although Kenya was happy to let its allies do much of the talking.

It is a ridiculous proposal. Kenya is no more equipped to handle such a delicate prosecution now than it was four years ago, when the country failed to initiate proceedings against anyone. Claims that the judiciary has improved since then may be true, but it’s also true that the separation of powers in Kenya between the executive and judiciary is still ambiguous – ambiguous enough for the president and his deputy to influence it in their favour. And even if a strict separation were maintained, witnesses who are already nervous to testify in front of the ICC with promises of confidentiality and immunity are hardly likely to risk testifying in a local court where any such guarantees will have to be carried out by government agencies ultimately answerable to one of the accused.

Kenya also can’t afford to handle this type of prosecution, which is expensive – prohibitively so. Just two years (2006-2007) of running the International Criminal Tribunal on Rwanda cost $270 million. This is huge money. Can Kenya really justify spending it when the ICC is assuming the cost for the prosecution, with a better chance of delivering justice?

But these irritating little details don’t really matter because the resolution isn’t really about getting Kenyatta and Ruto to face Kenyan justice. This will probably never happen as evidence mysteriously disappears, witnesses recant and prosecutors find themselves unwilling to proceed. No, the resolution is actually about getting Kenyatta and Ruto to avoid international justice, which is a lot more difficult to rig. There is a lot of evidence against Kenyatta and Ruto, and if the trial goes ahead there is a decent chance that one or both of them will end up behind bars. This is a chance neither man wants to take, and they are shamelessly abusing their elected office to make sure they don’t have to.

And the rest of Africa’s leaders are helping them do it. The resolution passed with an overwhelming majority. As yet unconfirmed reports say there was only a single opposing vote, that of Botswana, which would make it the only country to emerge from this with any dignity.

The justifications for the AU’s decision flowed thick and fast, but don’t let yourself be distracted by all the talk of the ICC’s racist agenda, that the ICC is “hunting” Ruto and Kenyatta, or that the African Union is finally standing up to the imperialists in the name of pan-Africanism. This is all just spin, designed to detract attention from the fact that our highest continental body has elected to throw its considerable weight behind two men that we have good reason to believe are implicated in gross human rights violations. This is what pan-Africanism has come to: a cynical get-out-of-jail-free card for politicians prepared to murder their way to the top.

To be fair, we don’t know if Kenyatta and Ruto are guilty, because they have not been tried in any court of law. But what the AU has said, resoundingly, is that it does not want to know.

As citizens, this should worry us. This should worry us greatly. It means, by extension, that the AU is not interested in holding anyone accountable for Kenya’s post-election violence. The more you think about it, the more monstrous this becomes: instead of justice for the victims, the AU is effectively giving immunity to the people most likely to have initiated the mass killings. And these are the people that we have trusted with guiding our countries’ and continent’s future, and with overseeing justice for victims in future conflicts.

It’s hard to avoid thinking that, as with all good politicians, self-interest plays a big role here. Few of Africa’s leaders are squeaky clean – as Jacob Zuma has shown us, even the head of Africa’s most progressive country is prone to a little bit of corruption and abuse of power. As for the Obiangs, Mugabes and Debys – well, the more they can do to discredit the ICC and prevent their own potential prosecution the better.