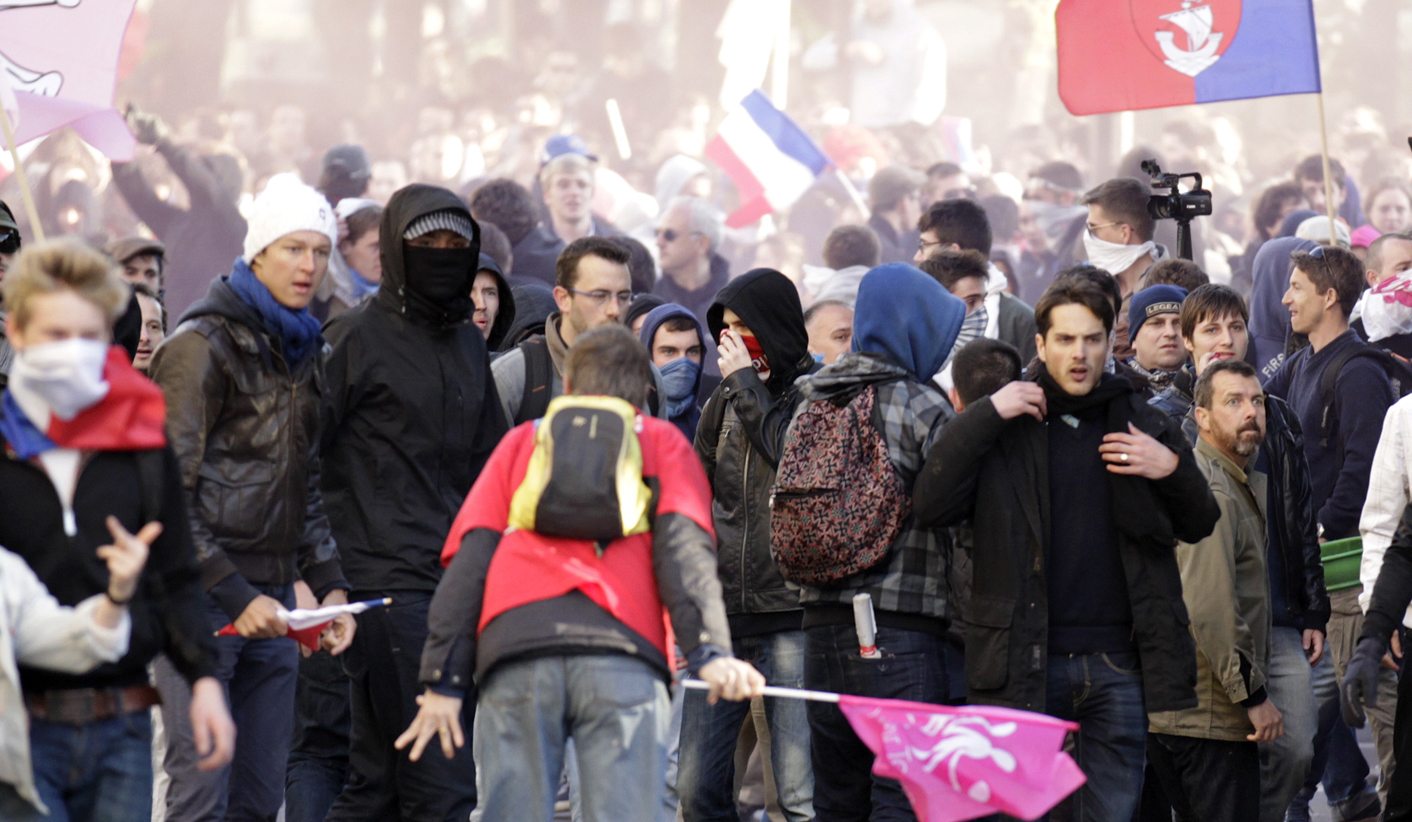 The protests, which began as a grass roots campaign strongly backed by the Roman Catholic Church, have morphed into a wider movement with opposition politicians and far-right militants airing their discontent with the unpopular Hollande.

Although they have failed to block gay marriage, the protesters hope their renewed show of force will help stop or slow down further laws some Socialists want allowing assisted procreation and surrogate motherhood for gay couples.

Jean-Francois Cope, leader of the opposition UMP party, marched in the demonstration and urged young protesters to join his party to keep up pressure on the left-wing government.

“The next rendez-vous should be at the ballot boxes for the municipal elections,” he said, referring to local polls due next year where conservatives hope to profit from the protest movement’s unexpectedly strong mobilisation.

Interior Minister Manuel Valls warned protesters on Saturday not to bring children along because of violence he feared after far-right militants clashed with police at recent rallies. He mobilised 4,500 police to secure the event.

Many parents ignored his warnings and some picnicked with children on the lawn at the rally. “Look, it’s perfectly safe here,” said Elisabeth Huet from Orleans, who marched along with her adult daughter and three small grandchildren.

A survey published on Sunday showed 53 percent of those polled support gay marriage and adoption, indicating a slide of about 10 points since the protests began last November. It said 72 percent thought the protests should stop now.

Plagued by economic recession, unemployment at more than 10 percent and pressure to reduce the public deficit, Hollande got some respite on Sunday from another poll showing his record low popularity had inched up four points to 29 percent this month.

While leaders of Hollande’s Socialist Party denounced the protest against a law already passed in parliament and validated by the Constitutional Council, the conservative UMP party was split over whether to continue the rallies.

Several UMP leaders, including former conservative prime ministers Francois Fillon and Alain Juppe, disagreed with Cope and did not join the march, saying lawmakers should exercise their influence in parliament rather than in street protests.

There were also fewer Catholic priests than at earlier rallies. Several bishops joined previous marches, but distanced themselves as the protests became more openly political.

France’s first gay wedding is due to take place on Wednesday in Montpellier, France’s self-proclaimed capital of gay culture.

France, a traditionally Catholic country, followed 13 others including Canada, Denmark, Sweden and most recently Uruguay and New Zealand in allowing gay and lesbian couples to wed.

In the United States, Washington D.C. and 12 states have legalised same-sex marriage. DM

Photo: Youths react during incidents with riot police at the end of a protest march called, “La Manif pour Tous” (Demonstration for All) against France’s legalisation of same-sex marriage, in Paris, May 26, 2013. The French parliament on April 23 approved a law allowing same-sex couples to marry and to adopt children, a flagship reform pledge by the French president, which has often sparked violent street protests, and a rise in homophobic attacks. REUTERS/Pascal Rossignol