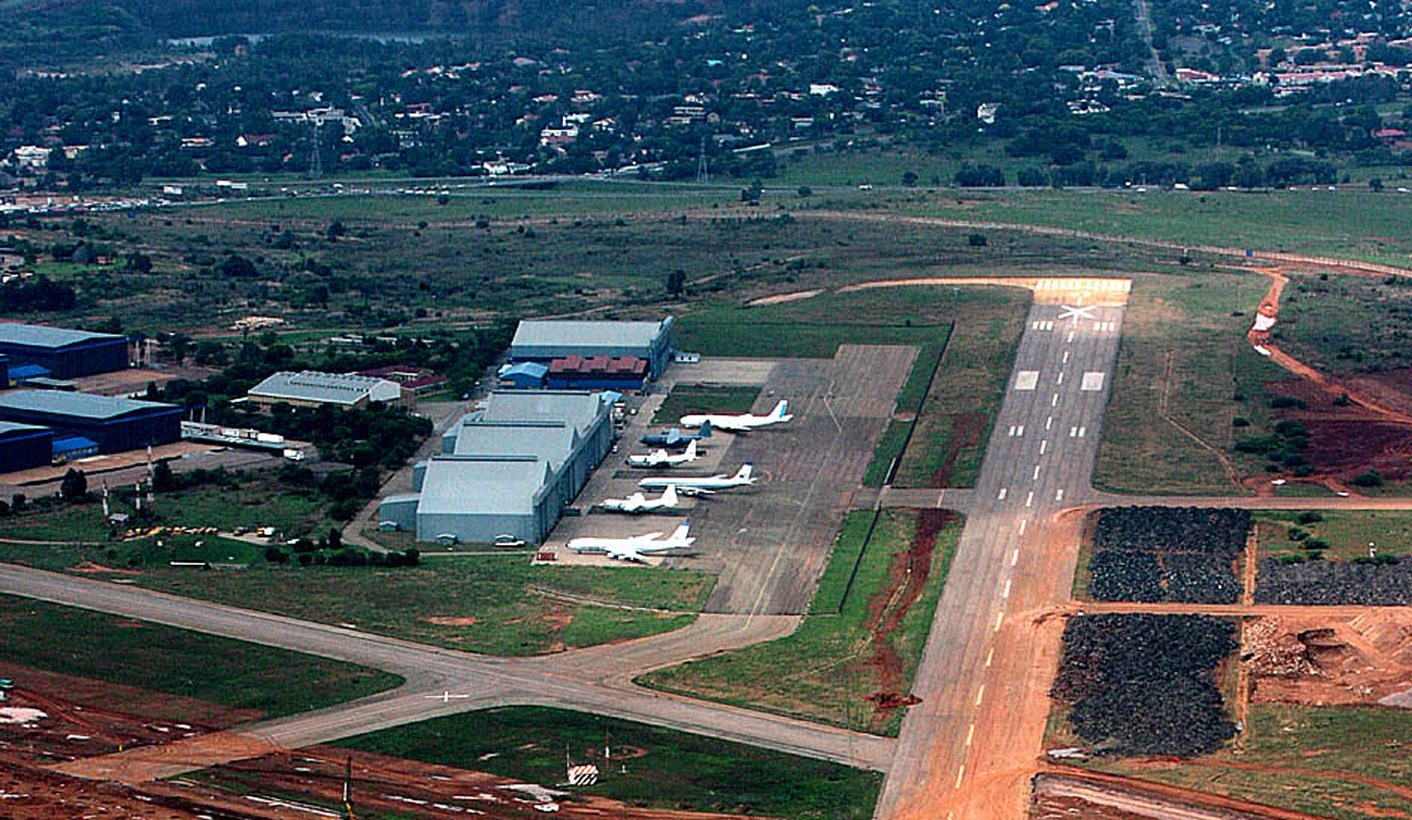 The report from the justice, crime prevention and security cluster of government departments has identified the chief of state protocol at the Department of International Relations and Co-Operation (Dirco), Bruce Koloane, and the commanding officer of movement control at Waterkloof, Lieutenant Colonel Christine Anderson, as the main culprits in the facilitation of the landing of the Jet Airways owned aircraft at the military airbase. And while President Zuma insists he had nothing to do with it, Anderson feels hard done by. By KHADIJA PATEL.

The government team tasked with investigating the circumstances under which the Gupta family was permitted to land a privately chartered aircraft at the Waterkloof Air Force Base has placed the blame with the Guptas, two state officials, and individuals in the Indian High Commission for the abuse of state facilities (and the president’s good name). And while in Parliament this week the opposition Democratic Alliance was vocal in its expressions of disbelief of President Zuma’s blamelessness in the matter, there is a growing scrutiny on the two state employees who have been thrust into the thick of controversy.

The report, containing the findings of a team of director-generals from the justice, crime prevention and security cluster of government departments, identifies the chief of state protocol at the Department of International Relations and Co-Operation (Dirco), Bruce Koloane, and the commanding officer of movement control at Waterkloof, Lieutenant Colonel Christine Anderson, as the main culprits in the facilitation of the landing of the Jet Airways owned aircraft at the military airbase.

“The aircraft in question was cleared for landing and the correct clearance procedures were followed, but based on false pretences as a result of the manipulation of the process by the Gupta family, individuals in the Indian High Commission, Koloane and Anderson, who shared a common purpose and acted in concert,” the report says.

According to the report, Koloane and Anderson met on April 24 with “an individual” from the Indian high commission to discuss arrangements for the landing of the plane.

The reports details that both Rajesh “Tony” Gupta and Atul Gupta both attempted to gain permission for the plane to land at Waterkloof. Koloane is said to have approached the defence minister’s political adviser, asking for assistance in processing the request.

He claimed to be “under pressure from Number One”.

Koloane is further alleged to have said Anderson gave the go-ahead for the landing, which “amounted to an abuse of an official working relationship to advance the interests of private parties”.

The report said this amounted to an “abuse” of President Zuma’s name to flout procedures and secure privileges. In the process, the report concludes that Koloane and Anderson led the charge in what eventually amounted to a “major security risk” for the country.

A representative of the military trade union to which Anderson belongs tells Daily Maverick she was aware of the report’s findings against her. Pikkie Greef, national secretary of South African National Defence Union (Sandu), says the report misrepresented the authority Anderson actually had.

According to Greef, Anderson was simply doing as she was told.

“Her job is indeed some of the things that is being described there – roll out the red carpet, get the flowers ready, put up the decorations, etc.,” he said. “But these aren’t things she does because she feels like doing it on a certain day. These are things that she gets told to do. She simply follows orders.

“She has absolutely no influence or rank or position or anything of the sort to make flight authorities happen.”

According to the report, Anderson said the request for landing rights at Waterkloof airbase should be approved because “Number One” was aware of it.

For his part, “Number One”, or President Zuma, as the rest of us know him, has condemned the use of his name to secure privileges and flout procedure. He denies speaking to or authorising any government official to process or approve the landing of the plane chartered by the Gupta family at Waterkloof, as alleged by Koloane and Anderson in the report.

“It is unfortunate that some officials and members of the public would resort to that practice of using and abusing the names of Members of Cabinet in this manner to further their own ends, as alleged. We call for vigilance and urge all our officials who are entrusted with managing state institutions not to succumb to pressure from name-droppers. They should immediately report to their superiors and to law enforcement agencies, anyone who behaves in this manner,’’ Zuma said in a statement on Thursday.

Crucially, the report exonerates Zuma from involvement in the sorry saga.

“Neither the president nor officials in the presidency, whether junior or senior, minister and director-generals in Dirco and defence and military veterans had instructed him to assist with the landing of the aircraft,” the report reads.

The report describes the actions of Koloane and Anderson as a “serious dereliction of duty”.  Both are deemed to have “grossly abused and undermined these [departmental] processes”, according to the report.

As it stands, Koloane and Anderson remain suspended from their respective jobs pending the outcome of internal disciplinary hearings. The report suggests departmental investigations be expedited timeously so that “justice is seen to be done” and disciplinary procedures be “implemented where deemed necessary”.

Anderson’s union asserts that she has been entirely cut off from the process.

Moreover, Greef alleges that Anderson was not properly consulted about her version of events during the investigation.

“She was called in once by a general – we don’t want to name the general now – but she was asked for an informal version of events, which she gave,” he said.  “But she made it clear to him that it was without prejudice and she’s got an attorney acting on her behalf but she’s willing to give informally her version of events. And that’s all she did. That lasted about 10-15 minutes and it was over.

“Now it’s clear from the report that some of those things that were informally related are now twisted and used as certain findings – and obviously a lot of other things are said in the report about her that were never put to her,” he says.

While Anderson is said to be angered by the report, Greef says she is considering reporting a gross violation of her rights to the Public Protector.

“We would want the Public Protector to do an investigation into the methodology that’s followed and come out with a declaration that indeed her rights were violated by various public service departments – or this committee [that conducted the investigation] – and their methodology is unlawful and unfair,” he said.

Greef and the SANDU have previously resorted to legal action in disputes with the Defence Ministry and the SANDF with mixed results. Anderson’s case, however, has been particularly emphasised by the union for the risk disciplinary action may place against her upcoming retirement from the air force.

“You must remember that we’re talking about a career soldier. She’s got a few months to go before she goes on pension. She’s spent most of her life in the defence force, in the air force.

“It’s a slap in the face for 25 years of service that one gets treated like a criminal and you’re not even afforded due process or any respect for the law,” Greef says.

In the statement released by the presidency on Thursday, President Zuma “urges law enforcement agencies to press ahead with any investigations that would be necessary, arising from the report”.

So far, the only criminal cases that have been opened were aimed at prosecuting those involved in escorting of guests from Waterkloof to the Gupta family wedding in Sun City. Five criminal cases were opened in relation to Tswane Metro police officers, who allegedly were moonlighting when they helped transport guests to the resort in a “blue light” convoy. The Times, however, reported on Wednesday that many of these criminal cases have now been dropped due to lack of evidence.

While the director-generals’ report does spell out several charges against Koloane, Anderson, and indeed the Guptas, it does not specifically recommend that they be criminally charged for their actions. We will have to wait and see. DM