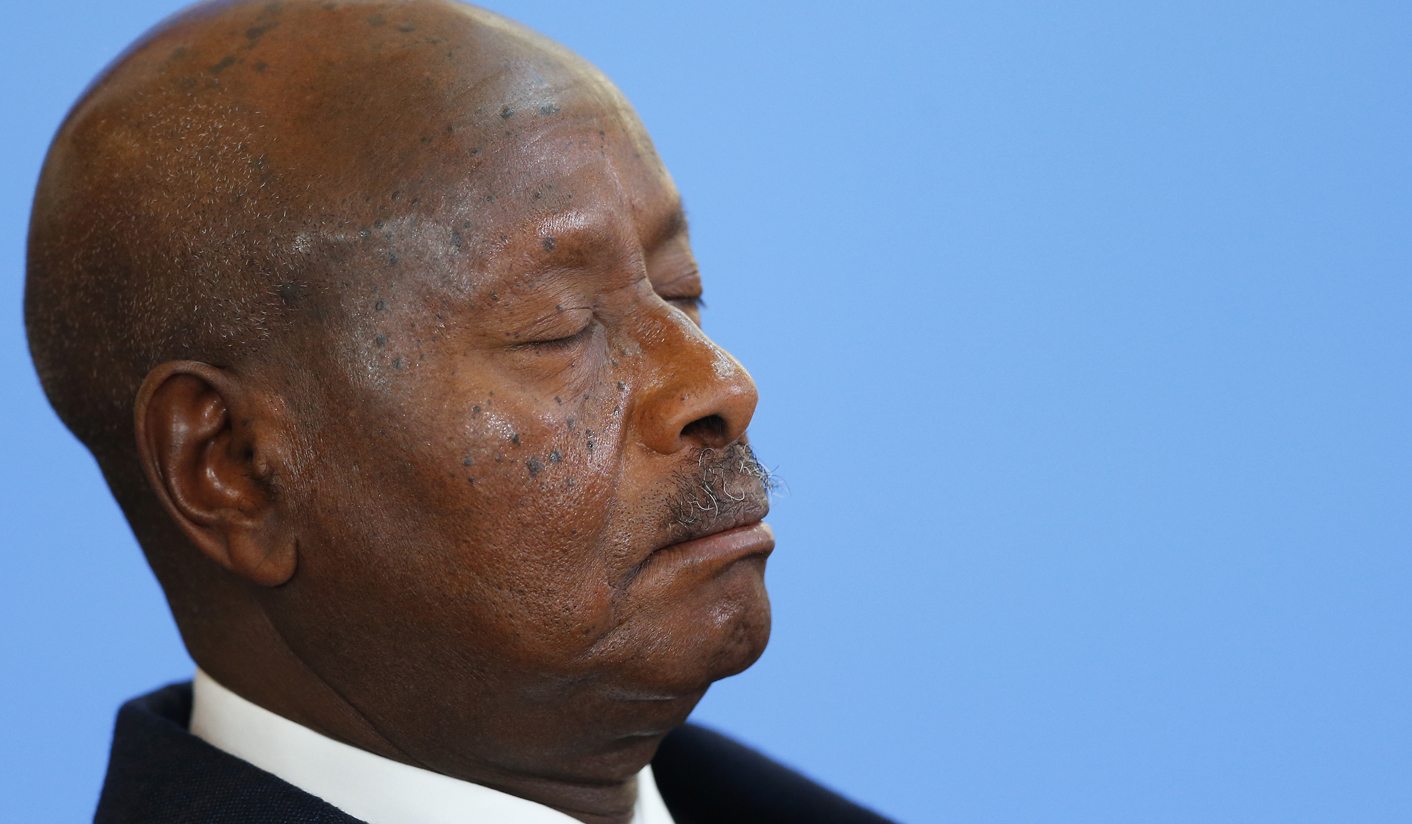 On Monday, 50 armed police stormed into the building that houses Uganda’s Daily Monitor. They shut down the printing press, unplugged computers and forced work to halt as they searched for an already-published document that casts Museveni’s government in a very bad light. Another newspaper and two radio stations were also raided in what looks like a brazen attempt to intimidate the press. By SIMON ALLISON.

There are many ways to limit or control the press, as the South African government well knows, having tried quite a few of them: there’s the subtle spin doctor approach (favoured in Western democracies but largely failed here due to the ineptitude of most government communications departments); there’s the promotion of state mouthpieces (how many exposés has the SABC broken recently? And let’s not get started on The New Age); and there’s the imposition of legal constraints, embodied here in the relentless progress of the Protection of State Information Bill, otherwise known as the secrecy bill.

But however desperately Zuma’s administration might want to keep journalists quiet, it has yet to resort to the direct approach – unlike the president’s Ugandan counterpart, Yoweri Museveni, whose patience with local hacks finally ran out yesterday.

Now, Uganda is no Somalia or Congo, where being a journalist is an incredibly dangerous business that can get you killed. Uganda is more like South Africa – a relatively young, one-sided democracy where political debate is vigorous and opposition to the government outspoken. The press in Uganda reflects this: there are plenty of media outlets offering a number of different voices and opinions. But all are wary of President Museveni’s tight grip on power, and his sensitivity to criticism.

As the African Media Barometer described last year: “State surveillance structures… continue to create a climate of fear among journalists as well as potential information sources, resulting in increasing cases of self-censorship. A disturbing trend of self-censorship through reportage of social rather than political issues leading to the downplaying of important issues is emerging.”

On Monday, this climate of fear crystalised into very real intimidation as armed government security forces forced their way into the offices of two newspapers and two radio stations, bringing all work to a halt and preventing broadcast and publication. As far as restricting the freedom of the press is concerned, this is about as direct as it gets.

“Today the freedom of the press in Uganda is under threat,” said a statement from the Daily Monitor, one of the newspapers targeted.

Officially, the government raid – conducted with a search warrant that the targeted publications were not given an opportunity to contest – was about looking for a letter written by a top army general. In this letter, published by the Daily Monitor last month, senior General David Sejusa claimed that he and other top army officials were being targeted for smear campaigns or assassination attempts by other branches of the government security forces. This is, supposedly, an attempt to remove any potential obstacles standing between the eventual succession of President Museveni’s son, Muhoozi Kainerugaba, to the presidency.

Predictably, the publication of Sejusa’s letter caused a furore, with the government angrily denying its contents. In fact, the government says the letter is a scam, and that it needs to find the original letter in order to compare signatures and prove the forgery. This was the rationale for the search.

But the Daily Monitor is not buying this explanation. “[The police] must be under instructions. It is horrifying that in this day and age you should employ all these methods – shut down a media house to get to a document.” Its perspective seems to be supported by the details which are emerging from the incident. It’s hard to believe that the 50 armed officers in the Monitor building were really needed to track down a single document, and shutting down the printing press and broadcast facilities had nothing to do with the search itself.

In going after Monitor Publications (the two radio stations shut down in the raid were also owned by the group), Uganda’s government is messing with what could be a very dangerous enemy. Monitor Publications is owned by Nation Media Group (NMG), which is the biggest media organisation in east Africa and most widespread in Africa (it is the only African media organisation with a comprehensive network of its own foreign correspondents across the continent). Along with Uganda’s Daily Monitor, the NMG owns the Daily Nation and Nation TV in Kenya and the Citizen in Tanzania.

Nation Media Group, in turn, is owned by one of the most influential and enigmatic figures on the continent: the Aga Khan. Head of a small sect of Islam that has flourished in east Africa, the Aga Khan is fabulously wealthy thanks to the tithes sent his way by the community. But at least some of the wealth is put to the use it was intended for: along with his media empire, the Aga Khan owns networks of hospitals, schools and colleges in the region (along with a fine selection of racehorses and a luxury yacht; he is considered a royal, after all).

Part of the reason that restrictions on the press are so prevalent in Africa is that media organisations don’t have the resources or international backing to fight back. Uganda’s Daily Monitor could be an exception to that rule – if the Aga Khan has the stomach for what’s shaping up to be a nasty fight to protect Uganda’s freedom of speech. DM

Photo: Uganda’s President Yoweri Museveni closes his eyes as he listens to opening speeches at the Somalia conference in London May 7, 2013. REUTERS/Andrew Winning