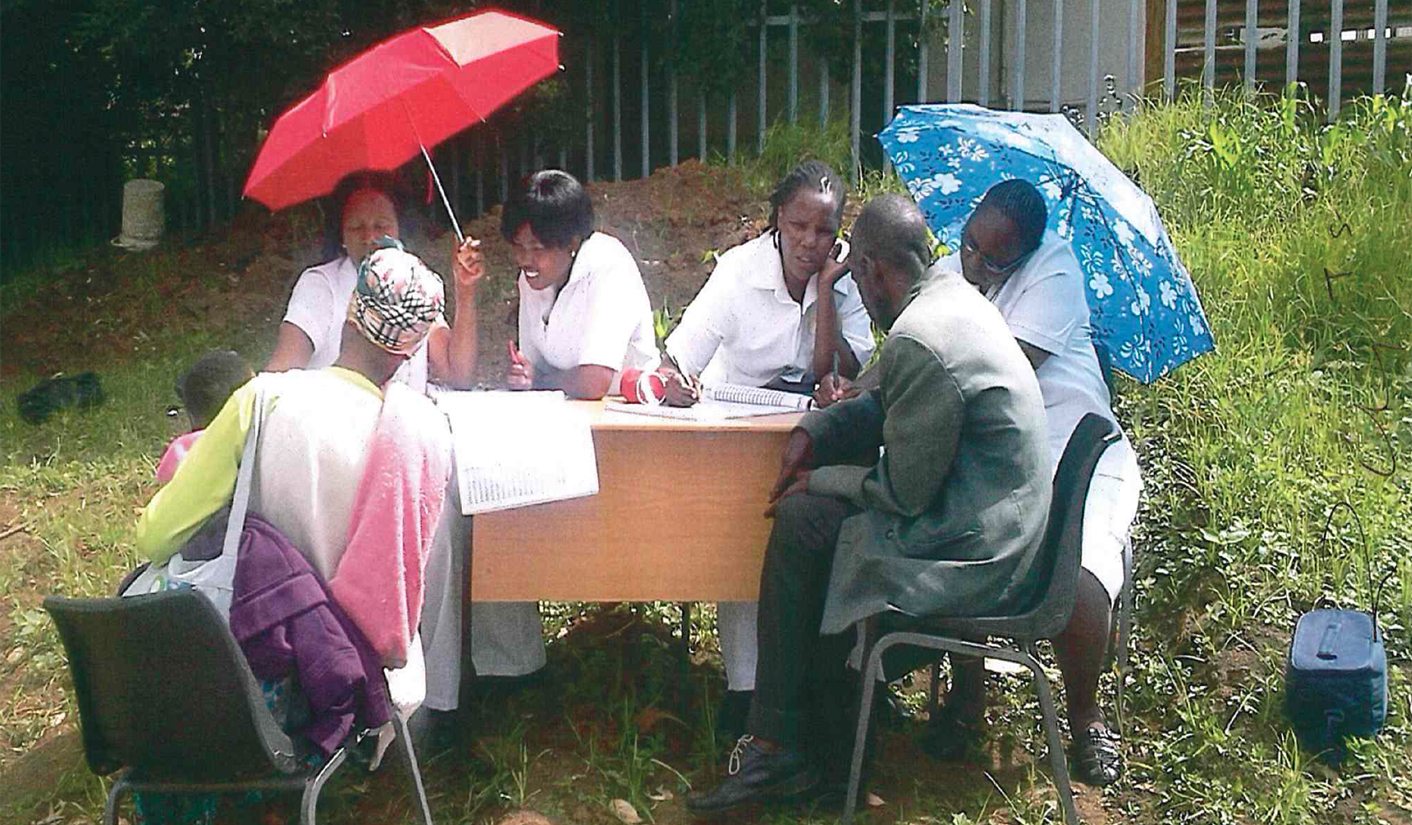 Since January 2013 when the Eastern Cape Department of Health decided to move the Lusikisiki Clinic to new premises without proper planning, patients and health care workers have been seriously compromised by the new, make-shift facility. The ‘clinic’ is so bad that it violates workers and patient’s basic rights and is a health hazard. But despite promises of change from EC health MEC, Sicelo Gqobana, the appalling conditions remain. By MANDY DE WAAL.

The MEC of Health for the Eastern Cape, Sicelo Gqobana, is a man who believes that politicians should never, ever make empty promises. “As government representatives, let us refrain from making empty promises. Let us commit ourselves to the real deal and not lip-service. Let us avoid letting people down unnecessarily. People want delivery or action,” Gqobana said at a health-focused event in Mthatha on Saturday 11 May 2013.

Gqobana lamented that his predecessors – whom he said were nothing more than liars and who had promised villagers from the nearby community of Mqanduli a new clinic – had delivered nothing. Gqobana declared that he himself had to pick up the slack and face the wrath of a people whose expectations had been repeatedly dashed.

“My predecessors, one after another, had promised the people of Mqanduli to build them clinics. Disappointingly, they abandoned the promises and never came back to say they were only joking. It is wrong,” declared Gqobana. “My predecessors had even turned the sod for the building of clinics in Mqanduli; others travelled in choppers to see identified pieces of land for the construction of clinics,” the MEC said.

“Cows were slaughtered and nice food was eaten to celebrate. But those were just lip-service and the communities are still waiting anxiously for the clinics. There is not one brick that has been laid and now I am expected to take responsibility. Let us (politicians) not talk and promise people the world before we double-check if we can really deliver,” Gqobana said in a warning to politicians who over-promised but under-delivered.

It is too bad and very sad that Gqobana, then, failed to deliver on promises that he himself made. For months now, Gqobana has been promising to improve conditions at a make-shift clinic in Lusikisiki. In that small hamlet the local health care facility was moved without proper planning and now workers and patient’s lives remain at risk at the new, makeshift ‘clinic’ that is unsafe, unsound and unsanitary.

Despite numerous promises made (verbally and in writing) by the MEC to improve the distressingly dangerous conditions at Lusikisiki, very little, if anything, has been done to improve matters. Gqobana and members of his department made promises to Daily Maverick as well as to rights activists Section27 and the Treatment Action Group that specific improvements would be made to the public health facility. But, months after deadline dates for promises passed, patients and health care workers’ basic human rights are still being violated on a daily basis.

The clinic is situated in the OR Tambo district in the Eastern Cape, and some 8,500 people visit it each month. The clinic used to be housed in a secure building in the centre of Lusikisiki, but after the provincial health department didn’t pay rent for a lengthy period of time, the clinic was moved. The health department insists it was turfed out of the building it was in. The building had a comfortable area for people to sit and wait in, and had access to water, electricity and the other essentials that make a clinic safe and comfortable. The new clinic is poles apart from the old facility.

Daily Maverick spoke to the landlords of the building that the clinic was housed in, who said that despite the lag in rent payments the health department wasn’t evicted but elected to leave on its own accord. [Read Daily Maverick’s February 2013 story entitled Eastern Cape’s Lusikisiki ‘clinic’: a health disaster waiting to happen.] The clinic moved to new premises without proper planning.

The health department simply moved the clinic to an empty, open patch of ground adjacent to local government buildings. Now the medical facility is ‘housed’ in two makeshift tents and a mobile home, the combination of which acts as a pharmacy, diagnosis area, treatment room and waiting area. The clinic has no hot running water – only a tap which was placed some distance from the makeshift clinic area. There’s no electricity, no satisfactory sanitation facilities and no proper entrance. Patients are exposed to the elements and in the cold rainy season must struggle through mud to get to the ‘clinic’. Essential medical services are severely compromised by the lack of facilities and the occupational environment for health care workers is hazardous.

The situation has been like this since January 2013, and Section27 and the Treatment Action Group have been petitioning Gqobana and his department to improve the situation since Monday 11 February 2013. Aside from installing one tap, a couple of water tanks and digging a ditch that was supposed to have been a pit latrine, nothing has been done to improve the appalling conditions.

“Nothing has changed yet since January 2013. In March 2013 a water tap was erected so at least there is cold water. In February 2013 a big hole was dug for a pit toilet, but that was left completely open. There is just a hole with a ladder that weeds are growing in now. They dug this big hole, left and didn’t come back,” Zukile Madikizela of the Lusikisiki branch of the Treatment Action Group told Daily Maverick on the phone.

“It is terrible. It is so difficult for the patients – it is cold now and the wind blows through the tents, the tents fall over or parts of the tents fall down. The cold air gets in and the rain and water gets in. People must stand in the mud and the water, and even the health workers and the nurses work in the water and mud,” said Madikizela, who is named as an applicant in a law suit that Section27 and the Treatment Action Campaign is serving against Gqobana in an effort to get the MEC and his department of health to deliver on their promises.

“There are elderly people and you see them trying to get to the clinic at the gate. They are struggling to use sticks because their legs are not strong. It is so hard for them because they are weak. It is so pathetic,” says Madikizela, adding: “The mothers struggle because they have children. There is only one consulting room in the park home and this is not enough because there are so many people, so the women and children must wait outside in the rain or the cold or the wind. It is difficult for them.”

According to Madikizela, there is still no electricity and medication like immunisations that should be kept at controlled temperatures are left in open cooler boxes. “Some women are chased away because the cooler box is too small and it cannot carry enough medication, so when they run out the people must go home without being immunised,” she said.