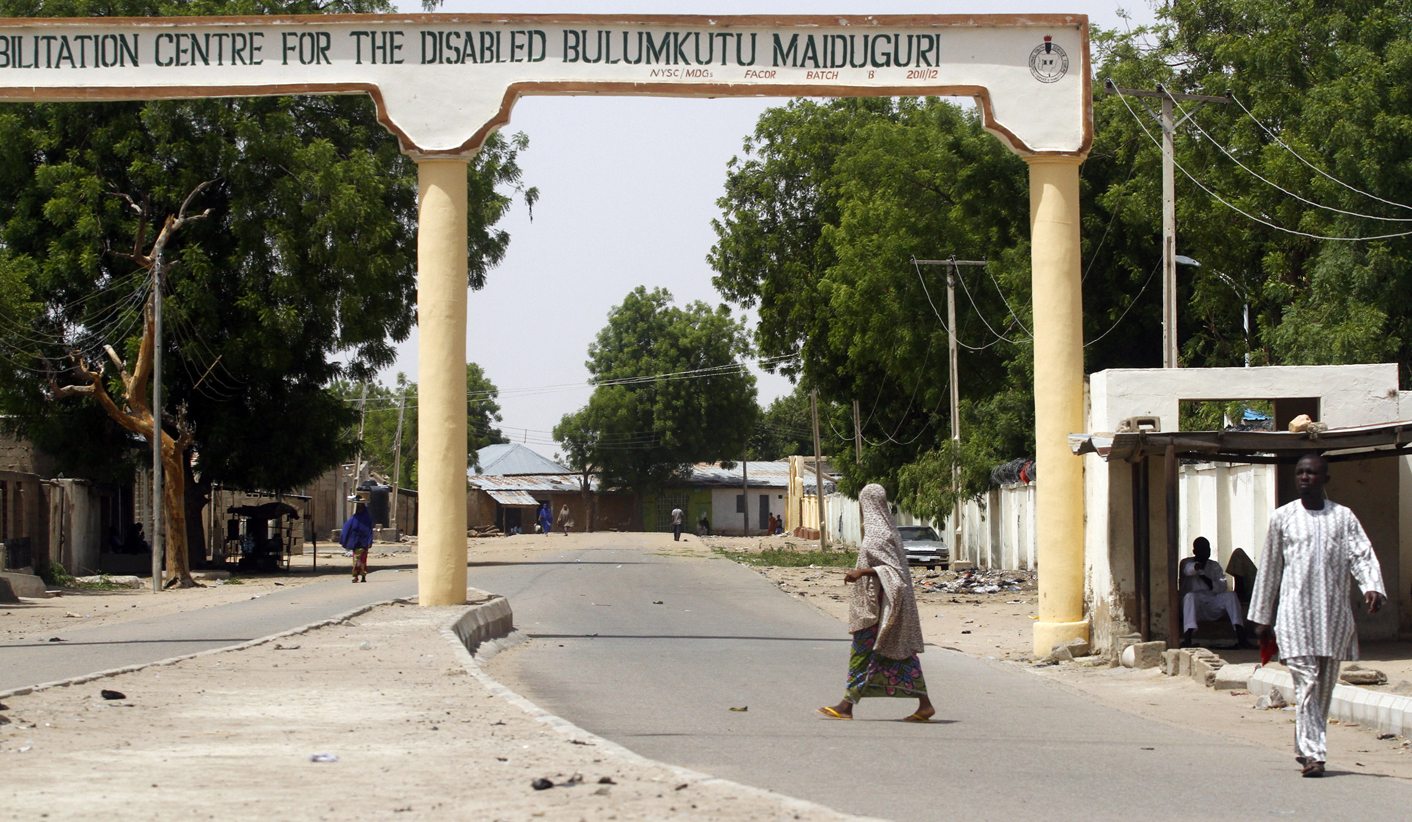 Giving up once and for all on a political solution, Nigeria’s embattled government has ordered a major military offensive against Islamist militants Boko Haram, even sending in the fighter jets. It is a sign that President Goodluck Jonathan has run out of patience – but it also shows he hasn’t learned much from Nigeria’s very recent history. By SIMON ALLISON.

It’s been less than a week into Nigeria’s big military offensive against Islamist militant group Boko Haram and so far, so good says the pumped-up military, still on the adrenaline high that seems to accompany shooting people and blowing up stuff. Two-thousand men and a bunch of fighter jets were dispatched to three north-eastern provinces to deal with Boko Haram once and for all as President Goodluck Jonathan – not a patient man at the best of times – finally ran out of patience.

And the army is struggling to hide its delight at the progress it has made. “The terrorists are in disarray,” said defence spokesman Brigadier General Chris Olukolade. He said that at least 14 of these “terrorists” had been killed in battles which also claimed the lives of three Nigerian soldiers.

The presidency, too, is enjoying having the upper hand against Boko Haram, for once. “The progress is quite encouraging and we believe that if things go on like this, we should be singing hallelujah shortly,” said presidential advisor Doyin Okupe, speaking to Voice of America. This is an unfortunate choice of words from Okupe, who should probably be avoiding explicitly Christian phrasing given the religious overtones of this particular conflict (Boko Haram’s raison d’etre is the establishment of an Islamic state government by Sharia law, while the Nigerian government is often accused of favouring the Christian-dominated south of the country over the predominantly Muslim north).

Okupe’s assessment of the army’s progress is even more upbeat than the army’s: “The majority of the various camps where the terrorists have converted into their hideouts have been heavily bombarded, both by air and on land.  And I’m just receiving a report that about 55 persons apart from [at least] 20 people were killed yesterday and another 55 people were apprehended yesterday in their attempt to flee from the various camps.”

Of course, all these figures should be treated with a healthy dose of skepticism. “The BBC’s Will Ross in the capital Abuja says it is not possible to verify any of this information,” noted the BBC with typical diplomacy. What it means, in this context at least, is that the Nigerian government’s casualty figures are more likely to be based on political expediency than an actual body count.

A case in point is the massacre last month in the north-eastern town of Baga. Journalists, basing their information on eyewitness testimony, reported that as many as 200 people were killed in fighting between Boko Haram and the army which erupted when the army tried to raid a Boko Haram stronghold. From the testimony it was clear that many of these people were civilians who were either caught in the crossfire or trapped in their homes, 2,000 of which were set alight by the army (not the first time that Nigeria’s armed forces have been implicated in gross human rights violations against civilians).

The army, naturally, offered a different perspective, claiming that there were only a few dozen casualties and that only 30 houses had been destroyed. This last claim was comprehensively trashed by Human Rights Watch which released damning before-and-after satellite images, making the army’s whole story look decidedly suspect.

Whatever happened in Baga, it was a turning point – and will probably be remembered as the moment when all hope of a political solution to the Boko Haram problem died. Before Baga, President Jonathan had been tentatively experimenting with the idea of offering a general amnesty to Boko Haram militants, along the lines of the amnesty granted to militants in the Niger Delta which has defused (if not solved) some of the tensions there.

This wasn’t a bad idea, but Boko Haram’s leadership made it clear that they were not interested, and Jonathan’s administration handled the whole thing in typically cack-handed fashion, alienating northern elders and prominent human rights activists by co-opting their involvement without consulting them, all the while attracting plenty of criticism for being too soft on the militants.

Baga then, with its horrific death toll and the international attention it generated, was the perfect  excuse to drop the conciliatory approach and try its polar opposite: the fully-fledged military crackdown. Baga was also important because it provided concrete proof that Boko Haram had somehow got its hands on heavy weaponry such as rocket-propelled grenades, which in military terms at least is a threat of a different order of magnitude to gunmen and suicide bombers.

But the military crackdown has been tried before, and it didn’t work then. In 2009, Jonathan’s now-deceased predecessor Umaru Yar’Adua tried something similar against a Boko Haram that was much smaller and less popular then than it is now. He sent in his big guns, slaughtering hundreds of militants in the compound and even nabbing the scalp of Boko Haram founder Mohammed Yusuf. The generals and the politicians clapped themselves on the back and congratulated each other on the brutal example they had made of the terrorist threat.

But that’s not the example we should be worried about. Of far more concern is how the 2009 crackdown proved to be little more than a temporary setback for Boko Haram, which was able to use the government’s own excesses as a way to generate public support in north-eastern Nigeria and as a valuable recruiting tool. It emerged, eventually, stronger than ever – since the crackdown, more than 2,000 people have died in Nigeria due to political violence, most of which involves Boko Haram. Terrorism experts claim the group has established cross-border links with Al Qaeda in the Islamic Maghreb, while its influence has grown so much that President Jonathan admitted that it threatened the sovereignty of the state.

All this puts the president in a difficult if not impossible position. As well as having to govern one of the most complex countries in the world, he’s got a fully-fledged Islamist fundamentalist group which is undermining his government’s authority and destabilising the region as a whole. He’s got to do something. But if history has taught us anything, it’s that military crackdowns do not solve problems like Boko Haram which are rooted in endemic poverty, discrimination and near complete lack of opportunity. At the very least, government and military spokespeople should realise it is far too early to write Boko Haram off, even if the army has won a few fights; and that it is definitely not the time to start singing hallelujah. DM

Photo: A woman crosses a deserted road in Bulumkutu, after the military declared a 24-hour curfew over large parts of Maiduguri in Borno State May 19, 2013. Nigeria’s military said on Saturday it had killed 10 insurgents and arrested 65 more as part of an offensive meant to wrest back control of parts of its remote northeast from an Islamist group seen as the main security threat to Africa’s top oil producer. A spokesman for Defence Headquarters said that in the Gamburu ward of Maiduguri, where the Boko Haram uprising began, “a total of 10 suspected terrorists were confirmed dead”. REUTERS/Afolabi Sotunde