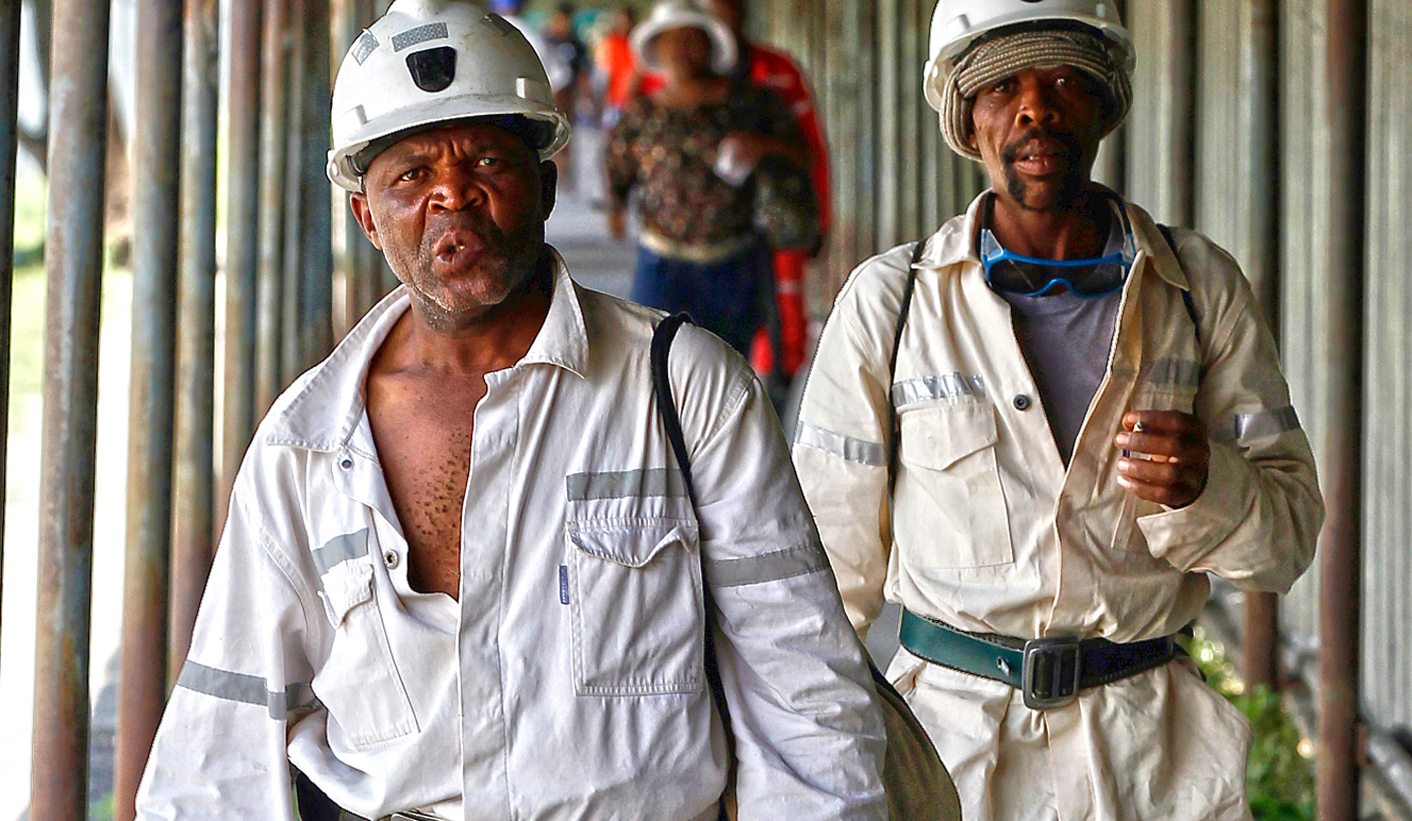 Miners walk at the end of their shift at the Anglo Platinum's Khuseleka shaft 1 mine in Rustenburg, northwest of Johannesburg January 15, 2013. REUTERS/Siphiwe Sibeko

After its first reported losses, the world’s biggest producer of platinum, Anglo American Platinum, wants to close shafts and retrench, so as to spare shareholders more pain. After months of negotiations between the Department of Mineral Resources and unions, 6,000 jobs are still on the line. In response, Amplats workers declared they would down tools unless the mining giant put people before profits. By MANDY DE WAAL.

With the sound of miners singing in the background, Anglo American Platinum (Amplats) workers’ spokesperson, Evans Ramokga, declared that come Monday 20 May 2013, the SA mining giant would be faced with a strike. Ramokga is a leading member of a workers’ committee established by Amplats miners, which was behind the two-month long strike at the mining group during the latter part of last year.

The announcement of possible wildcat labour action came after a mass worker’s rally in Rustenburg, and on the back of rising tensions between workers and management at Amplats. In January 2013 the mining giant announced that it wanted to suspend operations at two mines in Rustenburg and retrench as many as 14,000 workers. The ANC, Cosatu and mining unions (the NUM and AMCU) were outraged by the announcement, and after consultations with the Department of Mineral Resources and mining unions, Amplats revised the figures down to an expected 6,000 retrenchments.

Ramokga said that miners returned to work in January 2013 expecting to negotiate new wages, but were greeted with news of retrenchments. “The workers still want their R16,070 and they demand now that Amplats reopen these negotiations. The workers want a salary increase because this was promised to them last year after the strike. Management said that they would come to us early in January 2013 to negotiate the R16,070 that was promised, but when January arrived, we were hit with this issue of retrenchment,” the Amplats workers’ committee member said in a phone interview.

“We are still waiting for Chris Griffith (CEO of Amplats) to make a final statement regarding the retrenchments,” declared Ramokga, speaking on behalf of miners working for Amplats on the Rustenburg platinum belt. After initially threatening to go on strike, members of the workers’ committee told the media that they would wait until Friday 17 May 2013 to hear from mining management, but indicated that unless Amplats came to the party and quit the retrenchment talk, the strike would be on.

Speaking to EWN, Amplats spokesperson Mpumi Sithole issued a stern warning to miners who might down tools: “We encourage them to utilise the existing channels that we have in place to address any labour issues. We are advising against any planned illegal work stoppages as these may lead to disciplinary action,” Sithole said.

But Ramokga was undeterred. “We feel that Anglo don’t care about us or the retrenchments. All they care about is impressing the investors. The workers here in Rustenburg feel strongly – we don’t go back to work on Monday, if Anglo Platinum doesn’t change their stance; we will just wait,” he added. “There is too much unemployment in South Africa, so we are not going to accept the retrenchment of even one person. If Anglo Platinum doesn’t make enough profit, they should rather sell these mines to other companies that have the money to run these organisations. Anglo should take their debts and go,” said Ramokga.

The past financial year has been something of an ‘annus horribilis’ for Amplats and its parent company, Anglo. The world’s biggest producer of platinum reported its first operating loss, which was set at R6,3 billion for the year ended 31 December 2012. This represented a precipitous fall off from the previous year’s profit of R7,9 billion. Amplats attributed the losses to the two-month strike the operation experienced in the latter half of 2012, as well as “sales volumes, the impact of higher mining inflation on costs and lower realised metal prices.”

Anglo American PLC had already been bruised by a $4 billion write-off for its Brazil iron ore project, and the knock-on effect of the Amplats’ loss saw the global mining conglomerate drop 44% in operating profit to report a loss of $1.5 billion. The giant’s financial results were quickly followed by talk of austerity and savings. For miners in South Africa, this means job cuts.

“When I heard in January that Anglo Platinum was intending to retrench 14,000 workers, my immediate reaction was: ‘it’s payback time’,” said John Capel, executive director of the Benchmarks Foundation, set up to monitor multinational corporations to ensure that they meet minimum social, environmental and economic standards.

“At the same time as these retrenchments were announced, Harmony Gold locked out its workers and the CEO stated in a newspaper article that management was going to set the agenda around working on mines. Yes, we know that there’s too much strife in the local mining industry, and that the platinum price is down, and so on, but I think that this is capital trying to seize the agenda back from workers,” said Capel. At the beginning of May 2013, Harmony Gold Mining Company (Harmony) reported losses during its third quarter because of the temporary closure of the operation’s Kusasalethu mine.

Capel told Daily Maverick that post-Mangaung there was a very different sentiment about mining operations in the country. “Before the December 2012 Mangaung conference and post Marikana there was a lot of pressure on the mining industry. There was panic in the sector and they were wondering how they had gotten things so wrong. There was a lot of discussion about how mining companies could operate more responsibly, and there were real concerns that the nationalisation debate would be brought back onto the table,” explained Capel.

Mangaung came and went and saw the election of mining magnate Cyril Ramaphosa as deputy to Jacob Zuma’s ANC presidency. “It was as if the ANC was saying to big capital: ‘Don’t worry, we are sorting the problems out and our bias is more towards business’. The nationalisation debate went away at Mangaung and there was the distinct impression that mining business had been let off the hook,” Capel added.

The biggest concern, said Capel, is what would happen in mining communities where workers are retrenched. “If Anglo Platinum goes ahead and retrenches 6,000 people it is going to have a spin-off effect on the communities around Rustenburg, and if these workers are in hostels they will have to move into the community. If they are already living in the community, they are not going to have any buying power any more and this will affect local businesses and traders. What about the labour sending areas and the effect that the retrenchments are going to have there?” He believes that the platinum belt is one of the richest areas in terms of the precious metal, but one of the poorest in terms of the living conditions for workers.

“If things are so bad already, how much worse are they going to get? Anglo has already retrenched some 35,000 people in recent years – this has largely been sub-contracted labour that gets paid about 60% of the usual wage rate. This has already had a devastating impact on the society, so there’s growing resistance from workers and the community toward mining companies. Workers dig up the platinum and help make these companies wealthy, but these people don’t benefit,” said Capel.

“Anglo Platinum made record profits in 2008, but there was no plan to set some profits aside for sustainability or to tide the company over when the platinum price dropped, so as to cover the social consequences of potential job losses. When they were making these big profits they weren’t sharing them – local communities weren’t benefiting from these massive profits. There’s not one local community in South Africa that I know that will say that they benefited from mining and are better off,” said Capel, who leads teams that go into mining areas to benchmark social conditions and the lived reality of miners. “This has become a bigger issue than just the workers – there’s grave resistance in communities towards mining companies,” he said.

“The mining companies don’t seem to care about whether or not they have an antagonistic workforce. They perceive workers in a sub-human way, like cogs in the wheel that come and go when they are needed or not needed,” he said, and added that Amplats benchmarked profitability targets at its shafts at 14%.

“The shafts they want to close aren’t unprofitable per se – they are operating on an 8% profit margin and Anglo Platinum has just set the target for profit so high that they don’t mind the social consequence of a company purely driven by profit,” said Capel.

“They use the right words and talk the talk of a business being sustainable and operating responsibly, but it is meaningless. South Africa needs to start a conversation about doing mining business differently. But this is off the table because of the private interests in mining and who holds those interests. The mineral energies complex is the empowerment complex for SA’s BEE elites who have strong linkages to the ruling party or are members of the ruling party elite,” Capel said.

While SA’s business and political elite rule the mines, expect ongoing tensions with the unions and a continued face-off between mining operations and labour.

“Indeed, during the boom years of 2008 and 2009, Amplats paid out R29 billion to shareholders, mainly to its giant owner, the old Anglo American. This was more money than the entire wage bill of all platinum mines in SA during that period. They did not plan for the future. Today, they want to create a shortage of platinum in order to push up the platinum price,” a statement issued by the workers at Amplats reads.

“There must be change. And this change can and should start at Angloplats with mine workers, their families, the dependent mining communities and the whole of South Africa fighting back and saying NO to this plan and the blind race to the bottom. We will have no part of it. The platinum is not going anywhere. Neither shall the workers at Angloplats,” the statement declared.

Meanwhile Moody’s warned that South Africa was being pushed towards another credit rating downgrade by skills shortages, unemployment and mining strikes. Moody’s Kristin Lindow said SA’s economy was growing too slowly to eradicate inequality and stated that labour unrest at mines, so crucial to economic growth, was troubling. “There’s a mismatch between the expectation of labour and the expectation of mines,” Lindow said, and added: “It seems that both sides are talking past each other, not to each other.”

In the mining sector, certainly, there appear to be a lot of angry words, but very little conversation. DM

Photo: Miners walk at the end of their shift at the Anglo Platinum’s Khuseleka shaft 1 mine in Rustenburg, northwest of Johannesburg January 15, 2013. REUTERS/Siphiwe Sibeko